Our nieces Abby and Lindy have loaned us their pet monkey as a travel companion. 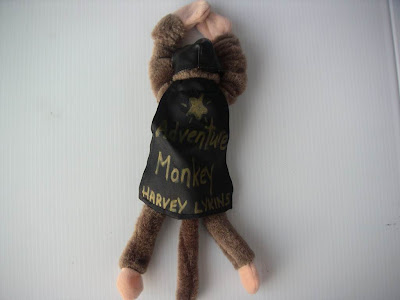 He comes with an excellent pedigree as a National Champion: 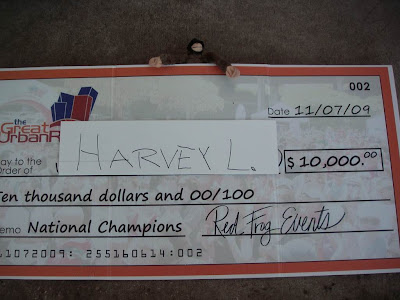 His first foray into the jungles of Austin, at the Greenbelt: 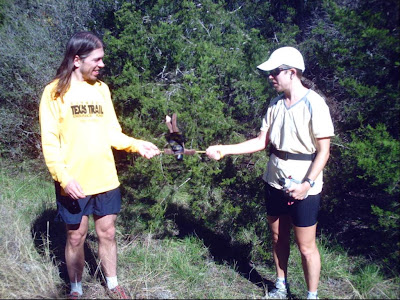 Look for more Harvey in future posts...
Posted by Marcy at 7:35 AM No comments:

Last week we traveled to Monarch, CO with the Beard family for a couple excellent days of skiing. Great snow, good weather, no driving issues - a really nice trip. Snow can be great fun in small doses :) 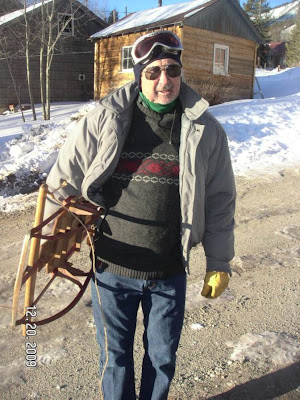 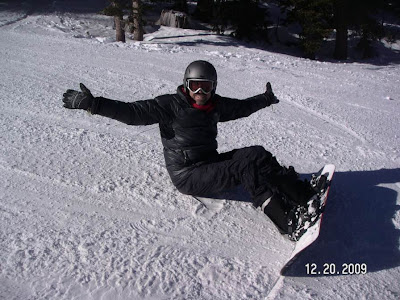 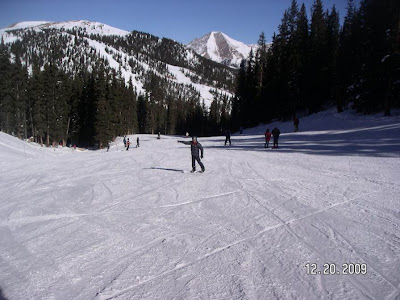 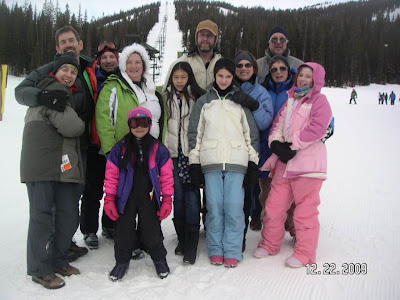 Rescue dog in training, about to take the lift up the hill: 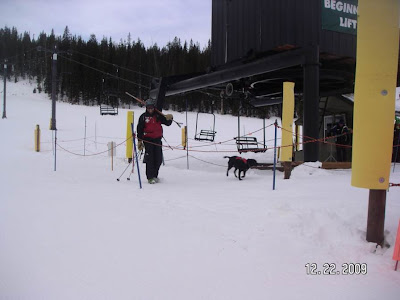 Ready for a couple more runs: 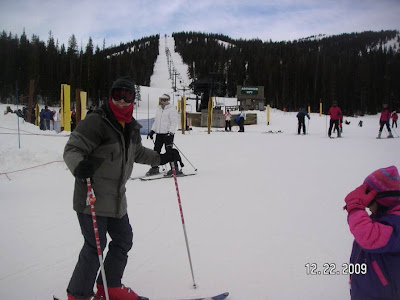 Last Saturday I entered the "Run Like the Wind" race in Austin, TX. It's a timed race on a 1-kilometer track in Oak Hill, and I figured I could get in some good training. My main goal was to still be moving at the end of the 12 hours (there were also 3, 6, and 24-hour categories), which turned out to be a lot more of a challenge than the 80 kilometers I also decided to try for.

The course was perfect - I can't think of a better place to do a timed run. It was all dirt/mulch trail (no pavement!), good footing, through the woods, slight downs and ups, fun turns, and even an occasional dog being walked nearby or trained on the agility course we ran beside.

The chilly, sunny day didn't hurt, either. I love running in the cold.

I started out at an easy pace and was rather surprised to see that my laps started clicking by at almost 6 minutes per lap. That made it easy to keep track of. Once I got warmed up, I settled into a pace of just under 6 minutes per lap, which turned into 10 km per hour including short breaks for water and Ensures.

Hour 3 was awesome - I was on a roll, just enjoying my run in the sun.

Hours 5 to 7 began to get harder, although I was still running the same pace. I started walking one lap every hour to eat and take a break. Kip joined me on one of those laps, and John started joining me on most of them as the day wore on. I alternated talking with them, listened to my book on tape (currently "Merle's Door"), and just running in silence. Over the years I've gotten pretty good at turning off my brain during long runs, to the point where it's nigh impossible to actually focus on a topic if I try. But it makes the hours blend together.

Even when you're going around in circles and there are no mountains or vistas to reward your efforts.

I hit 80 km at 8:09, which means I probably got a 50-mile PR if I knew exactly when I hit 50 miles. After that, having reached my distance target, I let myself slow down. I "dropped" a lap from my count so I could continue to keep track of my total by adding 10 km per hour, but that got difficult when my lap times inched toward 7 minutes. Now the math wasn't so easy and I wasn't all that excited about figuring it out. It was simpler to slow to 7.5-minute kilometers, or 8 km/hour. Easier on my legs, too.

John hung out during the evening and watched my progress on the timing laptop. Out of 9 people in the 12-hour race, I was running a solid 2nd place. John helped me figure out who was in the lead, a young man in black tights and an orange cap named David. David seemed to be walking more than I was, hmm. But his walking was faster than my walking, and his running was faster than my running. All I had going for me was my run/walk ratio. And the fact that I had commited to continue moving for the whole 12 hours. If David stopped, it wouldn't take long to make up the 2-kilometer difference.

But David kept moving, going strong, and he was obviously keeping track of me. He would say "Hi, number 88!" as he ran by on my walking laps. "Good job!" I would answer. He kept a good pace while I gradually slowed, not worrying about the competition but just keeping an eye on it. John told me I was doing fine over 3rd place, so I decided to go back to my top priority of moving for the whole 12 hours.

That's not an easy thing on a loop course. It was great that the trail wasn't completed flat, so my muscles got a change every few minutes from up to down and back again. But still, there was no rock dancing or long climbs/descents, or any real change to just running forward. My main consolation was that I wasn't attempting the 24-hour race. Those folks are crazy :)

Only 90 minutes left! John got me some coffee, which worked wonders both times I had some - better than Coke even, it seemed. I was 5 laps down from David now, so there was no pressure to run fast, just to keep going. I ran relaxed until the 11-hour mark, at which point I switched my iPod over to my running music playlist.

As soon as Mambo No. 5 started, my legs suddenly took off like they were possessed. "I Get Knocked Down", but apparently I get up again, because I was moving faster than I had the previous 11 hours. Passing other solo runners, I made sure to shine my light on the side I wanted to pass so they would tell I was coming by - because I was hauling butt and didn't want to run anyone over.

Strangely, there was a pair of walkers that seemed startled every time I came upon them. I tried shining my light all around, calling "excuse me", and "thank you!", but it took a few laps before they got the hang of giving me some room. I'm sure they were plenty glad when the 12-hour race was over!

I passed David once, and he made a comment like "Oh, so you're pushing it now" but didn't make a huge effort to keep up. He had no reason to - but he did keep walking all the way to 12 hours just to be sure.

I passed a guy who I think was the 24-hour leader. He initially tried to keep up, but I was running close to 5 minute laps and that was fast even by his normal excellent pace. I couldn't quite figure out why he was trying to catch me, but he mustered up some velocity and right near the end of 12 hours he passed me back. Funny!

More music, still zipping along, now breathing hard for the first time. Great training for the end of a long day! The funnest part was flying across the timing mat between each lap, on a slight downhill and with amazement at my lap times.

I started lap 115 at 11:55 and a few seconds, realizing I didn't have enough time to get back by the 12-hour mark for the opportunity for one more lap. Ah well. I wasn't going to beat David anyway, as he was still moving around the course, and it was probably for the best that I stopped bugging the 24-hour runners with my antics. I finished with 115 km in just over 12 hours. Nice!

The next morning I heard rain pattering on the roof and I was glad yet again that I wasn't in the 24-hour category. Those people are maniacs - and I am completely impressed with them.