Last weekend we drove down to Philadelphia for another fun Great Urban Race experience.  This time we were joined by Phyllis and Mary Pat who were doing their very first urban race.  Excellent!

The start location was the same as last year, along the river, and the clue sheet had us heading for downtown so we boogied on over to the subway station to take a ride.  While waiting for the train we took turns working on our "all teammates off the ground" photos.  It took a couple tries but eventually Phyllis captured this one, what a doozy! 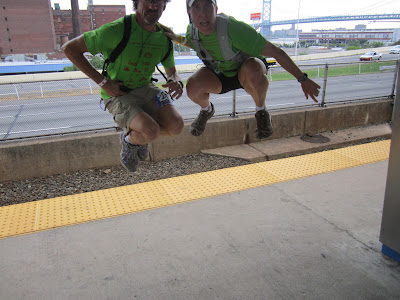 Once downtown we hopped off the train one stop earlier than Dave (on the phone with us) had suggested.  That led to Dave rerouting us to a closer checkpoint, although John didn't get the memo.  John took off toward the charity drop-off and managed to get 3 blocks away before noticing that I had not chased him down the street.  I was more confused than annoyed, which I guess is an improvement in my demeanor!

Finally we found each other and then the record store we were supposed to be searching for... but that was not our finest showing.  It's a good thing John could cover the ground back to me as fast as he had covered it in the other direction.

Reunited, posing with 3 album covers, and I must not have been too upset because I'm still smiling: 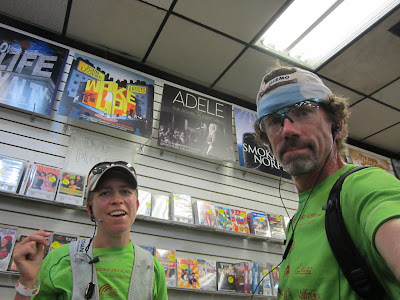 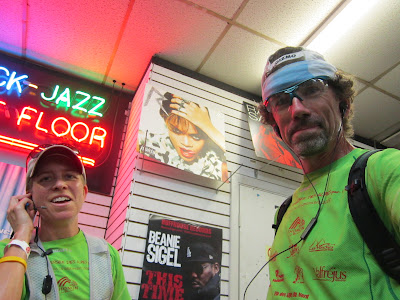 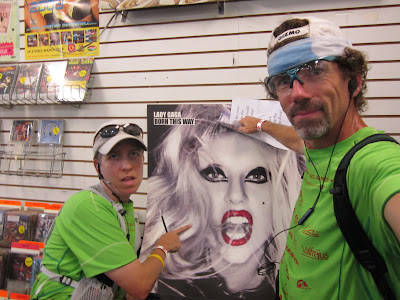 Back down the street to the drug store where we tried again with the charity drop-off and required photo (confusing the volunteer who had already seen John once): 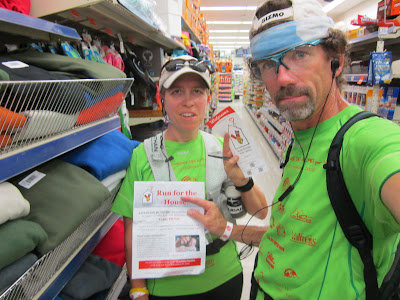 A few blocks away we located the bar with the Miller 64 can challenge - ta da! 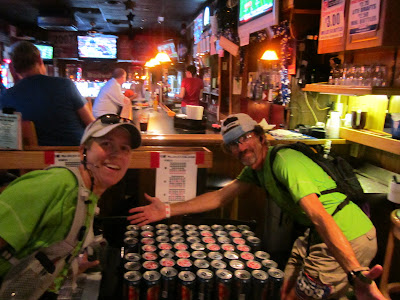 Next we made our way to the Capogiro Gelato place where we greeted Phyllis and Mary Pat, managed to create more confusion with sample spoons, and then took one of the funnier photos of us feeding each other.  I have no idea what I'm scared of, that was some AWESOME gelato! 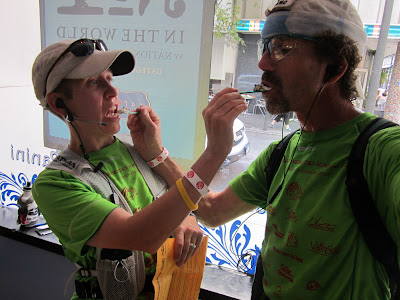 North across Market Street to the Architect Institute for a photo with a neon sign and some searching for the names of architects who designed various buildings: 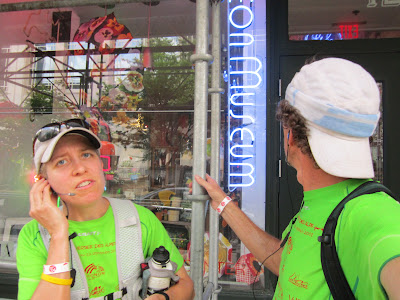 From there it was more scrambling to try to locate a Hampton Inn (the most obvious sign was way up high on the top of the building, we're really not good at noticing those).  Mary Pat and Phyllis weren't running quite as fast as we were, but they were working much more efficiently and we were side-by-side with them several times including here.

John chose a box of BBQ worms to eat and proclaimed them to be delicious.  I'm not sure which flavor the ladies picked but they managed to choke them down too. 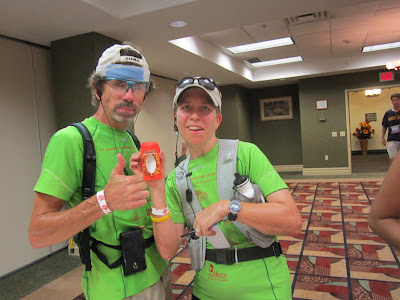 It was a bit of a long run to the eastern edge of the city for our last set of checkpoints.  Along the way I heard footsteps and it seemed like another team was keeping up with us.  When we finally had to stop for a light I looked back and saw some random woman had just given up on chasing us down.  I don't think she was a racer, just a bystander who thought it might be fun to play along?  I have no idea.  But it was funny (like odd-funny).

We found the Brazen Boxing gym where the biggest challenge was climbing stairs to the 3rd floor after having run many blocks!

We did a quick boxing lesson then got a picture of what we learned - yeah, don't mess with us (??): 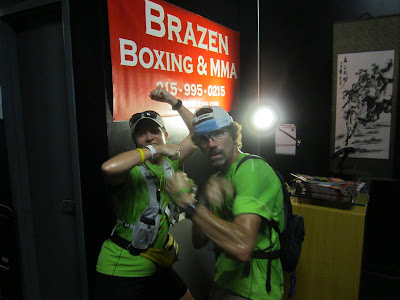 Around the corner to a cute T-shirt shop where we waiting to get in and then had to figure out the answer to three clues and get our photos with the corresponding T-shirts. 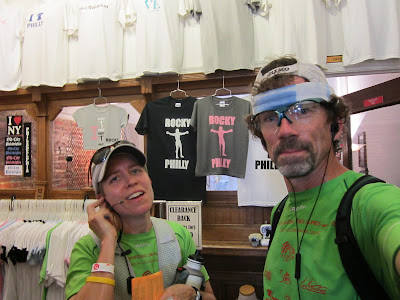 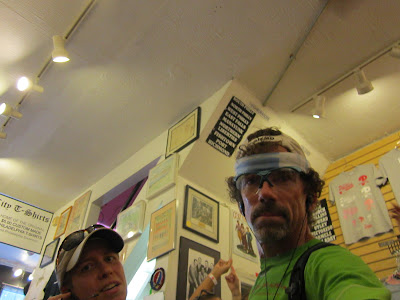 The woman running the shop made a point to let everyone know that the 3rd clue was tricky.  It related to "A team that gets silly while playing baseball for Philadelphia".  We wandered around trying to figure it out.  We got our photo with the three Stooges.  Our crew came up with this logo as a possibility:
http://textiles.zibb.com/trademark/philadelphia+sillies+s/30349542

But nothing in the store matched that logo.  Finally we decided to get a shot with the "ill" T-shirts and the woman confirmed that this is what we were looking for, although I guess I just don't get how this is silly.  Maybe you have to be a Phillies fan to understand. 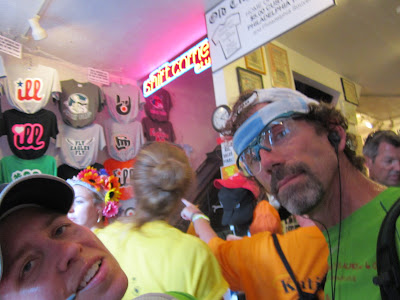 We stopped in an alley to shoot a video of us "moving like Bernie" from the movie "Weekend at Bernie's" and the subsequent dance craze that we have never heard of.

I have no idea whether this link will work (now or indefinitely), but here is our attempt at creating something that would pass inspection as a Facebook video upload:
http://www.facebook.com/photo.php?v=4469476185260

Around another corner to a theater where we found a room that was empty except for a box of costume accessories and another team getting ready to do a wheelbarrow pose.  We got dressed up and traded photos: 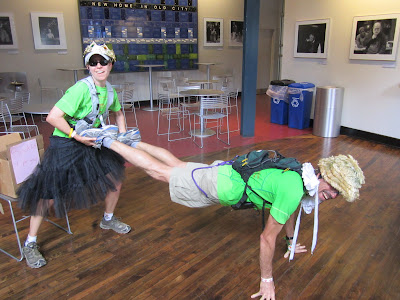 As we were leaving I realized we needed to find a booklet to bring back to the finish line, so I searched around until I noticed in the middle of the empty floor a chair with a box labeled "Booklets" (I think it's actually right behind me in the above photo).  It felt very "Alice in Wonderland"-like.

We really enjoyed a "figure it out yourselves" checkpoint.

One to go!  We ran down the street to the Fireman's Hall where we searched and searched for a hand drawn horse cart.  Phyllis and Mary Pat caught up to us again and found it in a couple minutes (nice!) then we traded photos at the fireman sign: 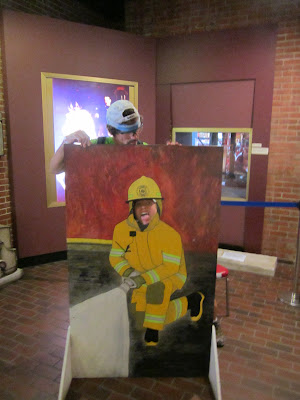 Time to run to the finish line!  We took off down Race Street (how appropriate) and then up the road to the finish line.  First ones back, all photos good, and Mary Pat and Phyllis were close behind for second place!  Rock on, ladies! 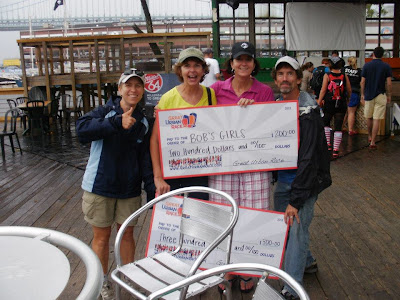 Very exciting, and huge congratulations to Bob's Girls on their fantastic finish.  They were well prepared and they ran a well-executed race.

On the way home Sunday we stopped at the Mohonk Preserve for some running and sightseeing.  It was our first time there, and wow what a neat place.  First the trail map had me drooling (you could put on a trail orienteering event with all those options).  Then all the technical trails through the rocks were so much fun - we couldn't help checking out as many as possible, from the Crevice to the Labyrinth, Humpty Dumpty, and the Giant's Playground.  The neat tower and smooth carriage trails and little benches to sit on, beautiful views in all directions, so much to see.

To top it off, we managed to arrive in the middle of the "SOS" race which involved swimming in three lakes and running in between them, finishing at the tower across from the Mountain House "castle".  Watching the runners and swimmers and finishers, what a hoot.

Oh, and then there were the long cliffs and all the rock climbing activity to gawk at.  We didn't get nearly as much running in as planned, but spent several fun hours amusing ourselves.  Guess we'll just have to go back and run some more  :)

Farm-fresh sweet corn and other veggies on the way home!