Two big benefits of being in Texas this winter - the chance to see family and friends more often, and the chance to do Too Cool adventure races!

Wild Windigo is a 1- or 2- person race with an 8-hour maximum, taking us around Dana Peak Park - somewhere new for me and John.  The park is great fun, with nice trails, a bunch of little peaks to climb over, and a beautiful lake.

This is actually a post-race photo, but it's a nice lead-in to the day.  Dave and I raced together, with John racing solo so he could do his own thing and stay out however long he felt like (he has a hip that has been bothering him recently, although that doesn't really explain why he's shorter than me in this photo...) 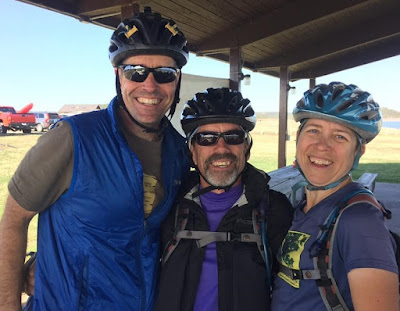 We were surprised by a day of chilly weather after all the recent Texas warmth.  My gear list started with shorts and a T-shirt but got longer every time I rechecked the forecast and poked my head out the door.  All bundled up and ready to go! 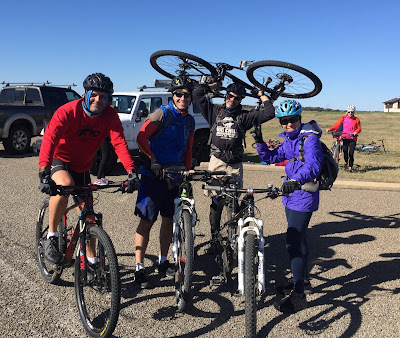 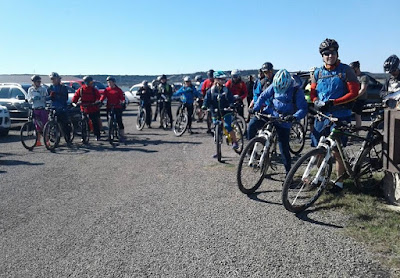 We checked the maps and checkpoint list, while a group of sprint racers took off like they knew where they were going - ? - we decided to take a few seconds and get that straight first: 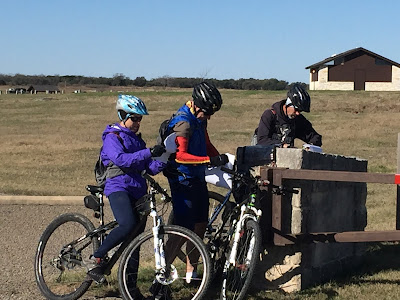 Dave knew right away where we needed to start, so we took off up the road.  It didn't take long before Dave offered me a towline, as it was slightly uphill and into a headwind and with me still getting over a recent cold/congestion.  That helped a lot, and I managed to follow closely through the first section of trail.  Nice trail!  Fun to ride and it didn't slow me down too much.

Dave made some excellent choices at trail intersections, following the trail map while he rode, and soon we had punched points B2 and B3 on a trail along the shore.  Back to the main path and over to the far bike point, B4.  Tammy and JD were coming back from there, presumably having gone directly to that one first.

We saw most of the rest of the teams as we made our way back, Hi John!!, then rode up a small hill to find B1 along a fenceline next to Dana Peak.  Back to TA, first section done.

Dave was super fast in transition while I started shedding outerwear.  Time to trek!  Back up the road, this time cutting across the fields and taking a direct bearing for the trail entrance.  We saw some bikes coming in not far behind us, but I think we were the first team to start the trek.

We started with the points that were further away again, climbing up a fun little mesa to reach T3 at the top.  The cedar trees were spread out nicely and there wasn't much underbrush, so the bushwhacking went well for the most part.  Down the other side to a trail that led around toward T5.

We cut up to a parallel trail and eventually found the south end of the spur.  A short climb led to T5, that was a nice find without any wasted time.  Coming down we met a couple hikers, and the woman seemed very concerned when we started down into the mess of brush toward the lake.  We know what we're doing, don't worry!

Well, we think we do.  This bushwhack was kind of a pain and we started questioning if there really was another trail down here, but there had to be - we had just biked on it.  Ah, there it is.  Back to the running part of our program.

We came around to Twin Peaks, followed a trail up to the saddle, then climbed through the trees and small cliff to the top.  It took circling half of the top to find T2, but it wasn't far and soon we were climbing through the rocks back down.  Great place to put a checkpoint!

More shedding of clothes, happy to be completely warm finally.  Hi again John, looks like you're having fun!  Dave and I continued on trails toward Dana Peak, took off down a fenceline trail and then followed a small gully up to T4.  Now it was time to climb the big one - Dana Peak itself.  Dave found trails up most of the way and the checkpoint was easy to locate at the top.  Nice one.

We slid down the south side, back to the trails, and back to the fields toward TA.  Next up was the dreaded windy paddle.  The wind hadn't bothered us much up to that point but we could see little whitecaps on the lake.

When Dave checked us in, he learned that we needed to complete a special test at some point.  Might as well do it now, we're warm and we don't have to wait in line for it.  The forecast called for the winds to die down bit by bit during the day, so maybe it would help to do something else first.

Randall put together a fantastic Survivor-style challenge!  We were tied to a long line of webbing that wound around and through various pieces of bungee cord, and we had to follow it through the maze.  Very cool!  We got hooked up and Dave led the way: 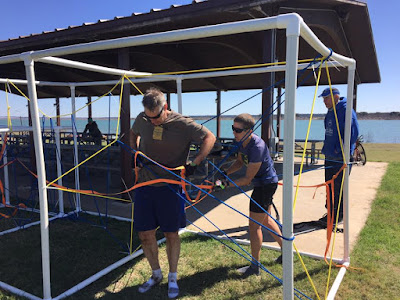 Trying to help, not sure I'm not making things worse, but Dave seemed to be managing OK: 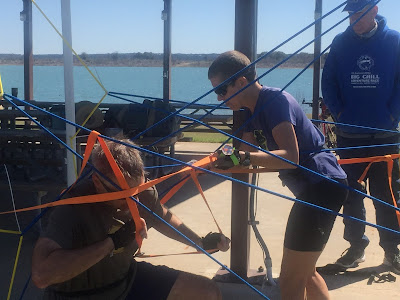 Doing some contortions as the webbing made an interesting path to follow: 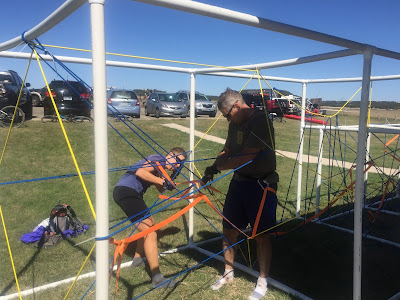 John was a bit faster than us when he tackled this later (and then set a speed record during a second attempt after the race was over) - we always said we would love to watch him on Survivor: 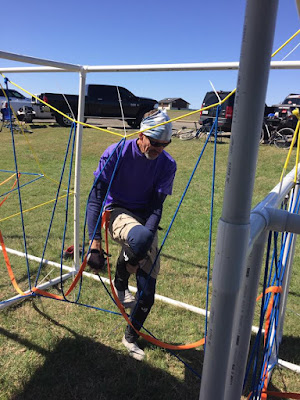 OK, can't put it off any longer - let's get on the lake.  No other teams had come in behind us off the trek, so we seemed to be holding a decent lead.

Dave launching us into the wind: 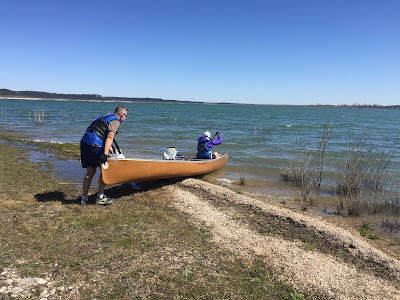 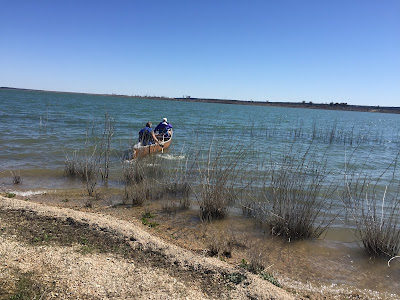 OK, for real this time: 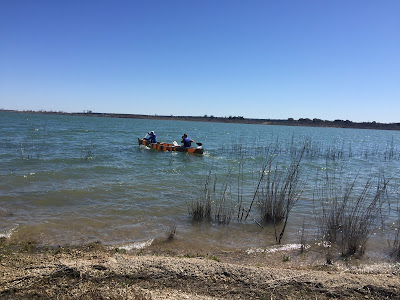 We paddled hard into the wind, bumping over waves and working on keeping our balance and our boat pointed the right way.  It took some work but eventually we made it to the shore below Twin Peaks.  Hmm, we don't see the checkpoint, even though we had been scanning for it the whole way over.

We backed the canoe up and went slightly south until it was clear we were at the southern end of this peninsula.  Well, I guess it's more north?  We were paddling that way when I turned to catch sight of P1.  We had originally pulled up perhaps 10-20 feet away from it, but some brush blocked our view.  Well at least we figured it out without going any further north!

Dave got out to punch the passport while I tried to maneuver the canoe into a better spot to launch back out to sea.  That only accomplished getting us stuck.  When Dave got back in, we tried to go forward but ran into a small bush that we couldn't get through.  Backward only beached the canoe back on land.  Oops.  It took more finagling but finally we were free.  P1 was probably our biggest time suck of the whole race, so we really can't complain too much!

The ride back toward TA was a real breeze, literally a tailwind blowing us back in that direction.  So nice.  We saw a couple teams battling the wind going out but looking strong.  We had used canoe paddles for the first section since it was the most challenging part and I am most comfortable with single blades.  We switched to double blades for the rest of this leg since we also wanted to practice with those.

Michelle and Benny watched us sail past the TA on our way to the next paddle points: 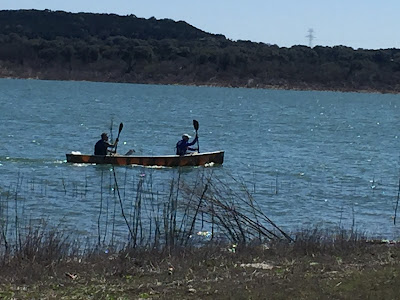 We debated which one to get next.  Based on wind direction I was thinking P2 would be best.  Dave was much more concerned about the navigation, and it turned out that this part of the lake had flatter water and less fetch.  The wind wasn't nearly as much an issue over here.  When Dave started guessing where P2 was going to be, and I started questioning his guesses, it made lots of sense to both of us that we should start with P3 instead.

P3 was easy - just to the right of the boat ramp at the end of the camping area across the way.  We could even see it up in the trees when we docked.  We got out and stiffly climbed the little hill up to it, working out the kinks in our legs and glad for a little walk break.

Compass time - ah yes, that's a better direction.  Disaster averted by calling an audible to go for P3 first.  There was somewhat of a headwind going north but not too bad.  In fact, it was stronger once we got into the inlet, something about the land funneling the wind right into our face.

We greeted a few fisherfolks and found P2 on the left side of the inlet.  Paddle points complete.  A nice tailwind, a bit more paddling, quick hellos with two RunLab teams who were paddling toward P2, a short portage over land to the TA and we were ready for the last section.

One last biking leg, mostly on roads.  Dave finally located B6 on the map after trying to find it during the paddle.  It was way out past the entrance to the park.  We got on tow and Dave led the way.  The towline was super helpful mostly to keep me in the draft, occasionally also giving me a tug up the longer hills.  Thank you Dave!

We rode over to the substation and found a little trail going through the trees and into a huge park that wasn't on the old map.  Cool!  Through the park and up to the powerline on the other side, there's B6.

We returned the same way, missing the opportunity to ride the main road around to B5 - we saw this later and it would have save some hills.  The park road was fine, but the subdivision hills were quite steep.  Ugh.  Nothing like having to power up a challenging grade at the end of a race when you've been pushing hard for several hours.  Good training!

Up and down, then B7 in a drainage off to the side.  One more point!  I looked at the map while Dave punched B7 - a little up, little down, then OH! that's a big climb!

The sign said "HILL" - no doubt!  Dave decided to get off and walk up it, thank you sir, don't mind if we do!

We rode around to find B5 tucked into the woods at the end of a cul-de-sac, good job on the nav today everyone!

Coming back we were just starting down the steep hill when Dave decided the view was worth a photo.  Why yes it is!  If I can... stop... my... bike...

OK, ready for a picture! 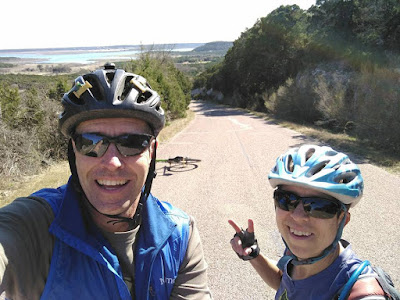 Wheeeee!  Along the bottom we spotted a racer up ahead who had just punched B7 and turned around to head back.  I wonder if that's John??  It is, it is John!  He had completed the whole first half of the race (bike and trek), one of the paddle points, and now one of the final bike points.  He was heading for the finish line and so were we.  Awesome!

So we got to ride in together, chat about how everyone was doing, and be happy that we were all finished. 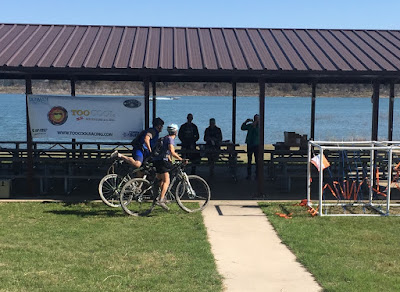 A dark photo with me, Art, Deanna making sure everything is recorded properly (thanks Deanna!) and Dave: 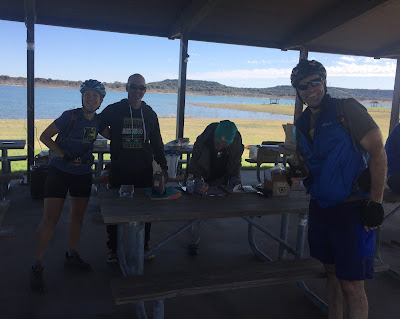 Team Vignette at the finish line: 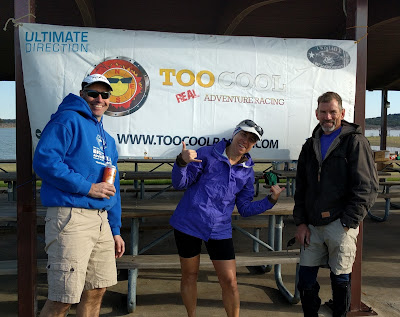 That was great fun, thank you Art and Robyn for an excellent course!  We look forward to more Too Cool Racing this spring  :)