Last Saturday I had a plan to ride a bunch of trails in South Austin.  Many are new since we last lived here and they seemed to connect up nicely.  I've been to McKinney Falls several times already (and always enjoy running and biking there), so I skipped that for the day.

The first challenge was Onion Creek Park.  I opted to jump in on the southern trail network and started exploring.  Some of the trails are nice and pretty, but soon it became clear that the majority are overgrown and rather annoying.  I made it to the Onion Creek crossing spot but decided not to get my feet wet heading across and back.  Best part was that the creek is quite lovely: 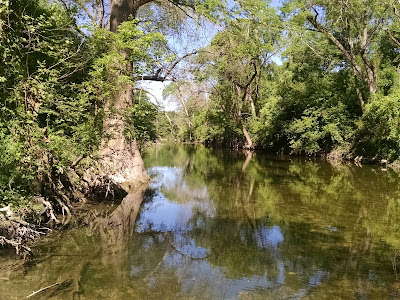 As I was riding along through the overgrown vegetation, I started wondering if that's poison ivy all over the place?  I now see this plant all over Austin as everything is turning green, so I really should just attempt to identify it.  Let's see... yep, quite possibly poison ivy! 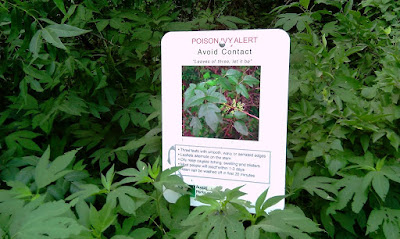 I got out of the park as fast as I could (easier said than done) and rode over to Slaughter Lane.  I made a quick stop for a leg wipe-down (Zanfel later!) and a snack.  I skipped Mary Moore Searight as I have ridden there before - it has some fun little side trails and a nice view of Slaughter Creek: 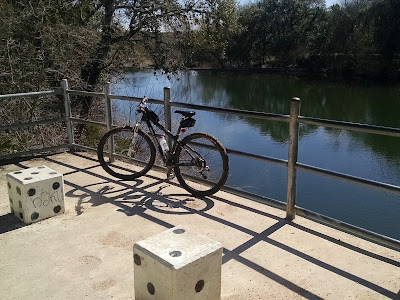 Time to get off the main road and onto some actual trails.  Bauerle Ranch Park trails are really nice.  The community is surrounded by green space and trails, and if I lived there I would probably run on those trails every day.  Fun to ride through wildflowers too: 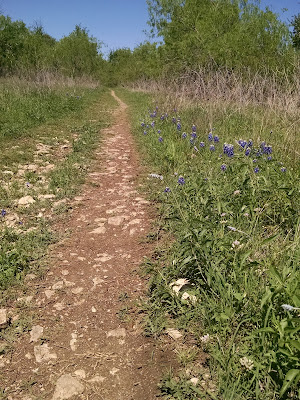 The southern side is a bit more technical with some good rock training and little ups and downs.

I biked across Brodie and into more green space.  After getting stuck in the Wildflower Center (it's probably not wise to come in from the back side on a bike, let's not try that again) I finally made my way over to the Veloway.  Something I haven't seen in years, fun! 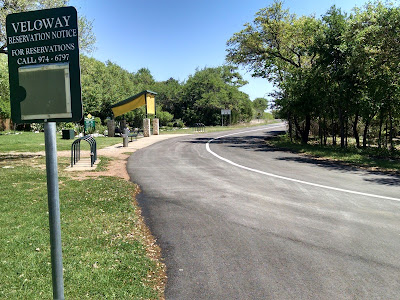 I enjoyed riding a loop+, then cut over to the trail that parallels it on the north side.  The trail crossed under Mopac to another network of trails, fun.  Brief detour to the Coffee Bean  :)  then back on trails toward Circle C.  Really nice park on the other side of Escarpment.  Then over to 1826 to explore Slaughter Creek Trail.

Now this was a good loop.  About 5 miles around, signed for bikes to ride clockwise and pedestrians and horses to go CCW.  Not sure why it took me so long to figure out that pattern, but it makes a lot of sense now that I understand it.  The first mile in the biking direction is quite rocky and I was wondering just how long these 5 miles would take me.  But it got smoother and faster and I enjoyed most of the rest of it.  Even got a bit of good training out of it: 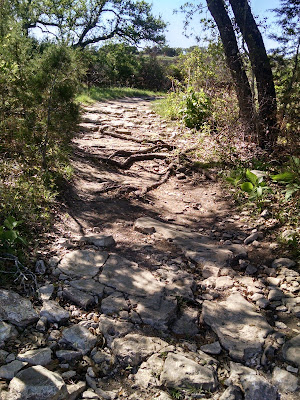 That was fun!  And I wasn't done with trails yet - more connections from 1826 to Davis Lane, then a nice path through Latta Branch over to the paved trail through Dick Nichols.  Excellent.  I found the side trail that cut under Mopac and followed under the highway until I popped out here: 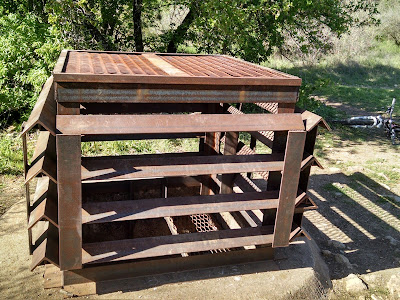 It's called Whirlpool Cave and it's one of the more interesting cave entrances I've seen.  Looking inside it drops straight down, so this is likely a safety cover/management of who gets to go in the cave.  I was actually looking for the Convict Hill/Brush Country intersection when I came upon this, so I was rather confused for a couple minutes but a quick map check got me going the right way again.

Another nice path along Brush Country - it would have been great to have all these options when we lived in Oak Hill!  Also - a Kerbey Lane Cafe would have been amazing  :)  John met me here for a "late breakfast" (also known as breakfast for supper) - Hi John! 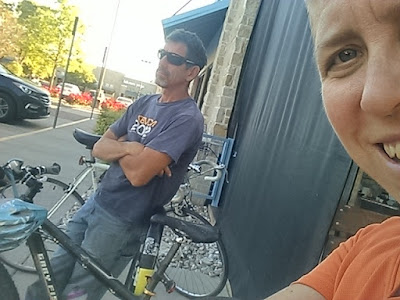 One last picture on the way home... 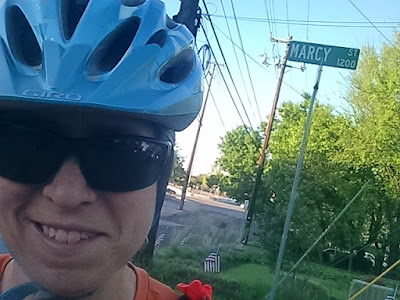 ...to go along with a sign I had found earlier in the day: 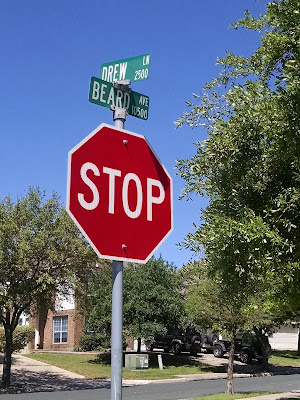 Fun day!  The next day was quite enjoyable as well.  Dave and Leslie met up with us to paddle from Mansfield Dam down Lake Austin.  Thank you John for doing a boat shuttle so we could make this work.  Heading out as it just got light: 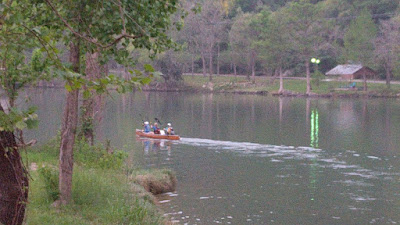 I brought the O-maps from the orienteering meet a couple weeks prior and we got out at Commons Ford to explore.  It was nice to get a look at the park without being in a hurry for once.  Team photo at the pool: 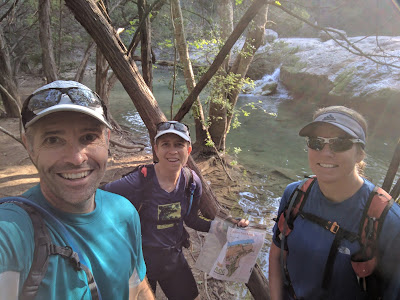 More fun in the park! 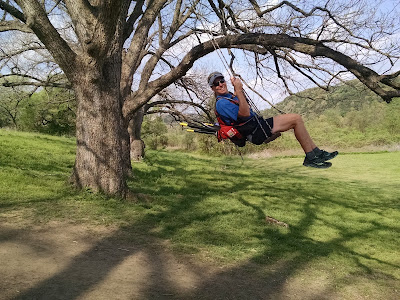 Coming in for a landing over at River Place: 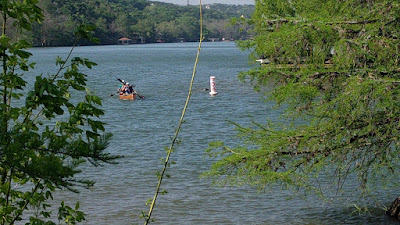 Practicing with kayak paddles and enjoying the speed of a 3-person boat: 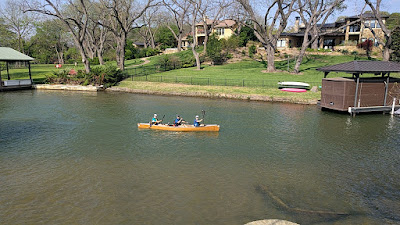 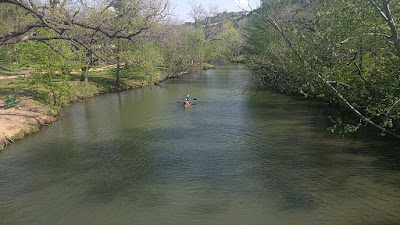 Leslie led the way up the River Place Trail and we got some good elevation training that morning.  And we're done, yay! 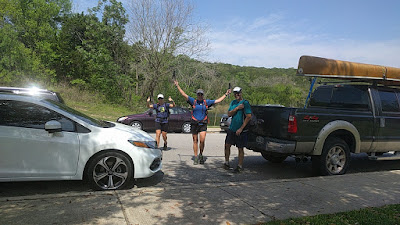 One more day of Austin exploring - this time mostly stationary (although I did bike there).  Electric Drive was having a grand opening, complete with electric vehicles on display, why hello: 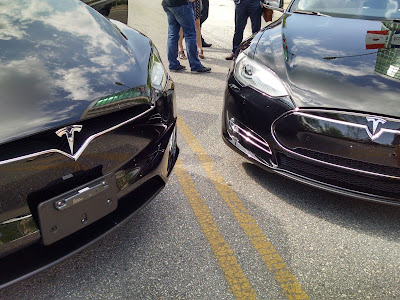 Thinking about an electric scooter: 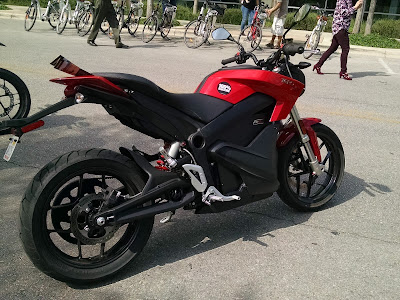 The solar kiosk that John has been working on, where you can charge your phone and electric bike: 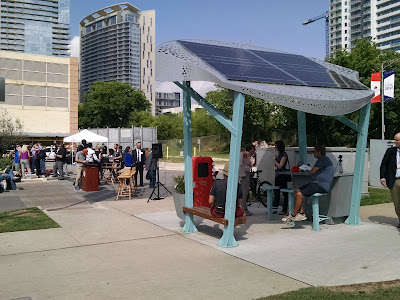 Another view of the kiosk - well done, John! 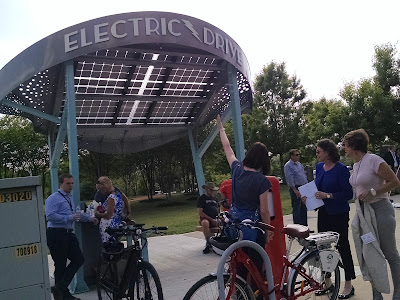 Mayor Adler making a few remarks before the ribbon cutting: 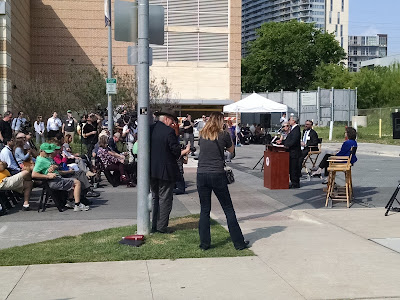 A chance to sit in a Tesla, couldn't pass that up! 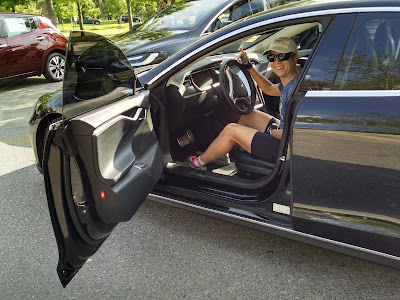 I've been enjoying training and exploring around Austin, a fun city to spend a few months!