Another day of cruising and fun, starting with a run on the deck (well, Kip started with a run, I actually took a week off for once): 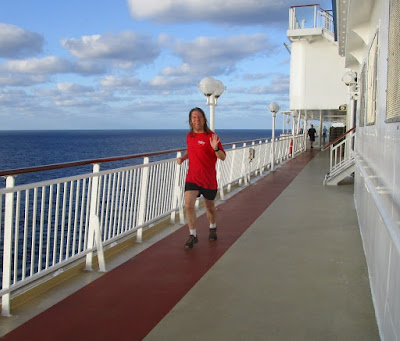 An excellent shirt choice by Rodney: 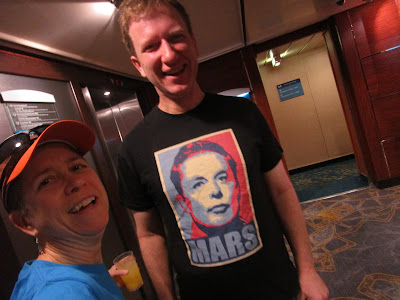 I just love that a group dressed up as Stand By Me characters for their photo with Wil Wheaton!  I lost track of their names; I'll add that if/when I figure it out: 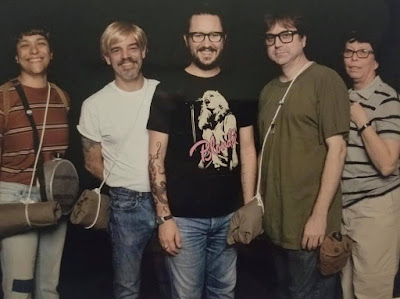 Pretty much says it all! 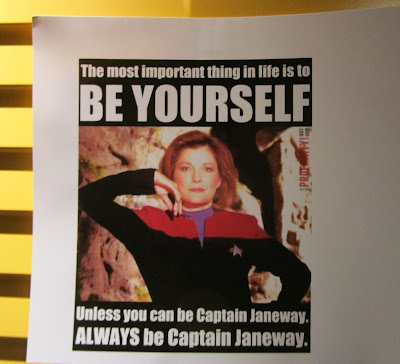 There's Janeway again!  And Erin Macdonald, giving a science briefing - I so enjoy her talks, that was a highlight of the Las Vegas convention and I'm really glad they brought her on the cruise as well: 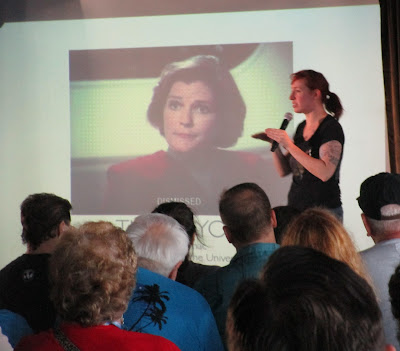 I popped in to see Rekha Sharma's donut decorating, looked like a fun activity: 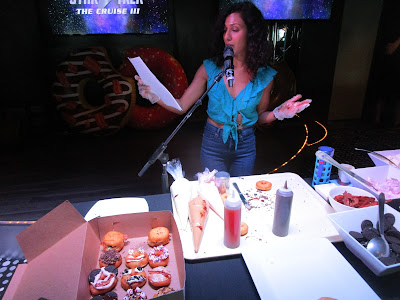 And back to 13 Forward for a second science briefing, where Phil Plait had some very-recent space news - they found BB-8! 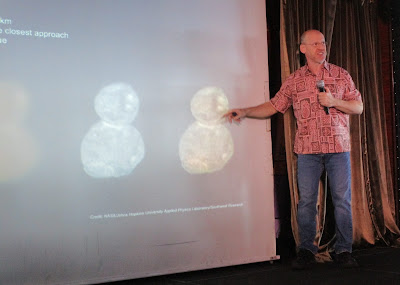 And now for one of my favorite cruise shows, Nana's cooking demonstration.  Different chef but still funny, JT trying his best to help and still making us laugh, and in the middle of the action is Nana somehow creating delicious food to share with a roomful of people: 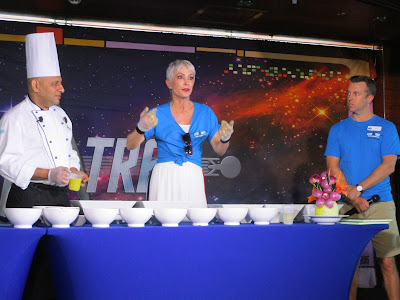 I can't even explain what was so funny, you kind of had to be there: 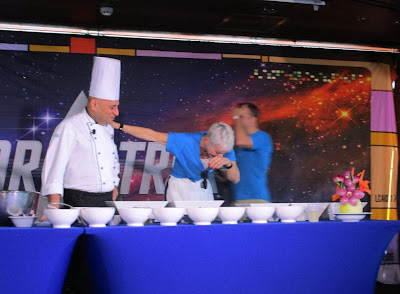 And that was even before Ethan Phillips showed up unannounced! 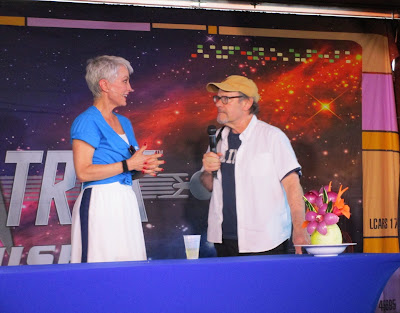 Nana will probably want to add more when she gets ahold of the bottle... 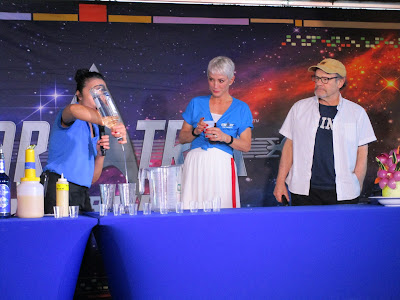 Thank you for the food, drink, and entertainment! 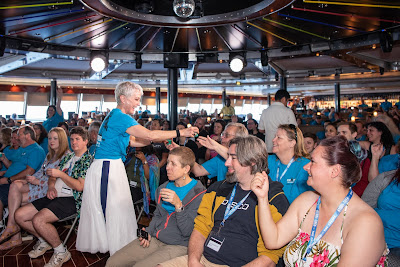 Watching an ECP cameraman capture some cruise-related thoughts while he had these two together: 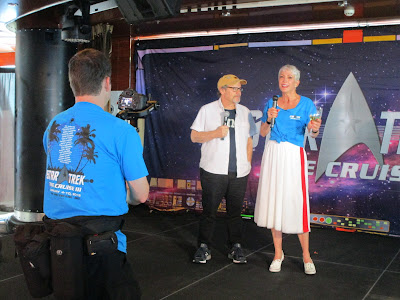 I didn't get a great photo, but I did enjoy listening to Mary Chieffo, Kenneth Mitchell, and Erin Macdonald discuss the science of Discovery: 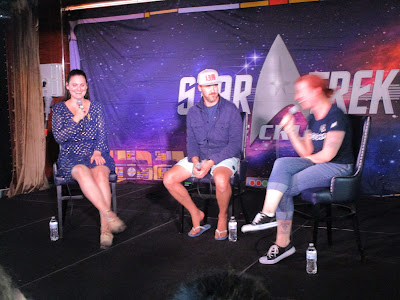 Robert Picardo and Jordan Bennett told stories and sang fun songs (possibly some new ones this year), always a good time watching these two joke around: 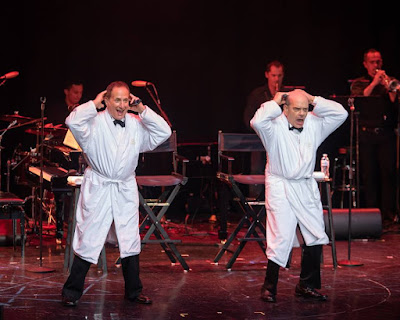 Ethan's late-night adult comedy was a blast, and if you didn't figure out beforehand that this could be raunchy, he set the tone with the very first joke.  We were rolling on the floor starting immediately.  After the show he had a minor medical issue come up and had to leave the ship the next day; glad to find out later that he's OK!  Thanks for the laughs, Ethan! 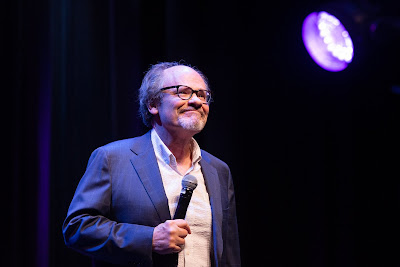 The next day the ship was parked at Grand Cayman, and I had gotten a tip that a tour of Cayman Spirits Co. might be fun, so we trekked over to check it out - party time! 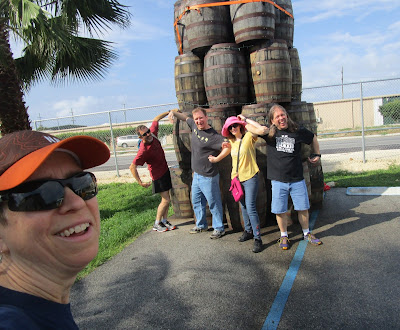 Rum tasting, a tour of the facility, peace, love, Trek, what more could we ask for? 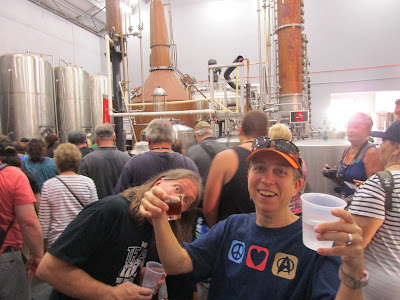 This is more up John's alley, and we should have stopped in here because the vegan bread/chocolate place in town had a long wait for a table - next time! 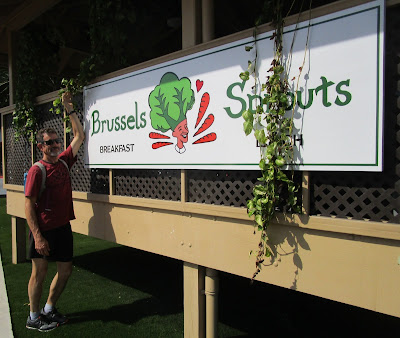 Hmm, maybe John could work here for a few months... 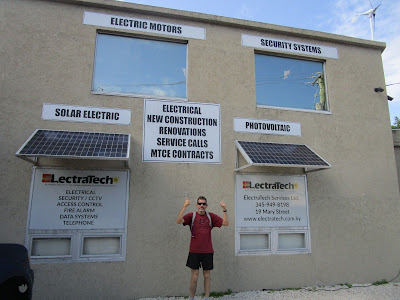 Back on board for more Star Trek fun.  We dropped in at the "Captain vs. Klingons" tennis match and I ended up staying for the whole thing - the combination of decent tennis play, trash talking (they all had mics on and interacted with each other and the crowd) and watching Jason Isaacs take on both Michael Dorn and Kenneth Mitchell was more compelling than expected.  Plus they made sure we knew that tennis conditions were humorous - not your normal tennis court (longer, sloped up to the middle, and with a net over the top - "that stupid thing!" or words to that effect). 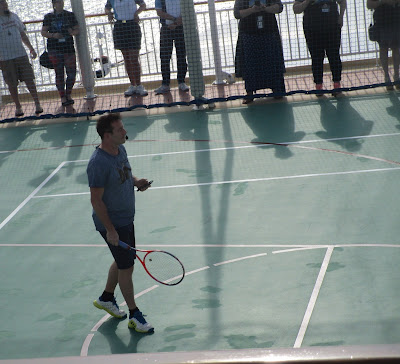 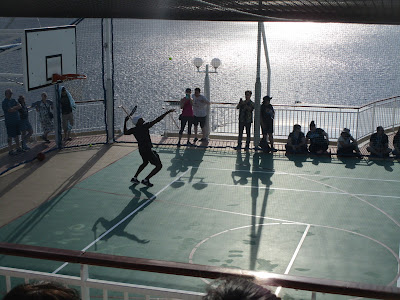 Kenneth and Michael's secret strategy - hide behind the net? 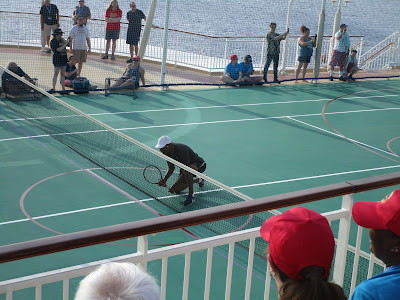 A surprisingly amusing way to spend an afternoon: 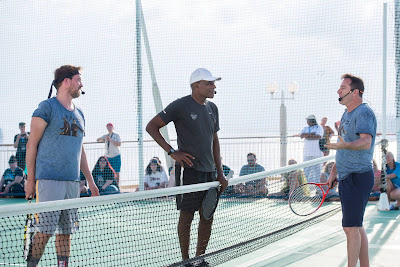 Thank goodness (and amazingly) Jason won in 2 sets, so I still had a bit of time to catch part of the Deep Space Nine panel with these fun folks: 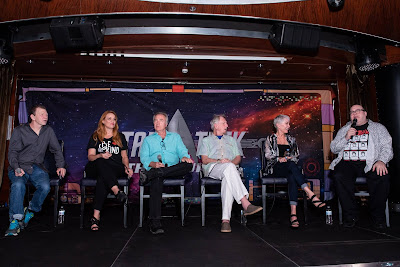 Another highlight was the game show of the week (probably my favorite evening show because you never know what will happen).  With Ethan needing to leave, Robert Picardo and Jonathan Frakes took turns stepping in to take on Jason Isaacs and Wil Wheaton.  Lots of laughter, amusing reactions by the Brit (Isaacs) to American-centric questions, and an excellent showing by Jeopardy geek Wil Wheaton who won both rounds and seemed really excited about the whole thing.  From a fellow Jeopardy geek, that was awesome! 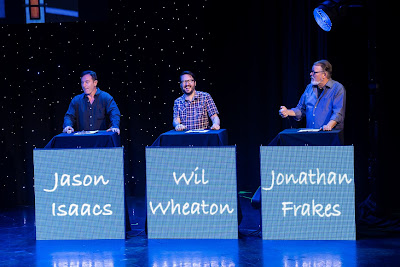 Yet another highlight - playing a poker qualifying round for the chance to play in the finals against Wil Wheaton.  Kip had tried once already, but the very-fast blind structure makes it much more of a "luck" game vs. needing a lot of skill.  John and I were like, "hey, we can do that", so we joined Kip and Rodney to try our luck too: 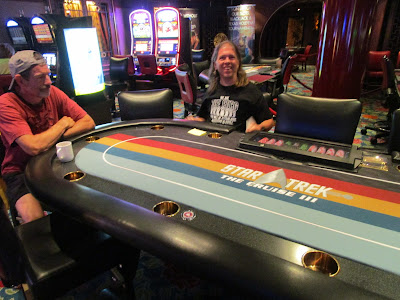 I was out early on a coin-flip hand, taking the opportunity to snap a photo of the rest of the action: 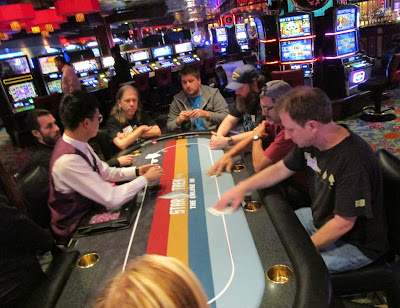 Excitingly, the last 2 players at the table were Kip and John, so Kip offered John a deal - the cash winnings in return for the final table spot that Kip really wanted.  Deal! said John, and we were all stoked that Kip would get a chance to play against Wil.  Super cool!

Poker and cruise stories to be continued...