RVE Summit - from MD to AL

Now for another edition of "time travel blogging", i.e. catching up on recent events.  My excuse this time was that I was away on a Big Trip back east, which was great fun, resulted in a bunch of photos, and now I get to relive the adventures in a series of posts.

Part one = the RV Entrepreneur Summit!  I've been listening to the RVE podcast since it started a couple years ago, and I'm a big fan of Heath and Alyssa and spreading the concept of working on the road.  We sort of do that already, more on the side of nomadic living than being entrepreneurs, and the summit was great for dreaming up ideas for future endeavors.

They started a summit a couple years ago and this year we were finally able to get there.  Our friends Kathy, Bob, and Danny were also very interested, so it turned into a wonderful week of being able to see them plus meet new people with similar ideas, and get all inspired by what might be possible.  As one woman said in the video they compiled, "Freedom, baby!" 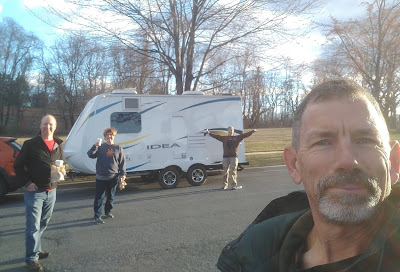 John and I flew to Maryland and joined Bob and Kathy for the drive down to Alabama.  Always love a good road trip!  Mr. Duck accompanied us as we drove across Tennessee: 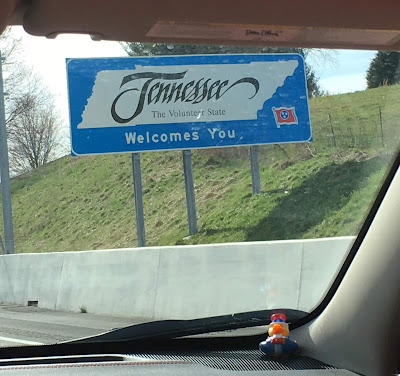 I really like Bob's setup with a rear camera on the back of their trailer - here's a demonstration (while parked, of course): 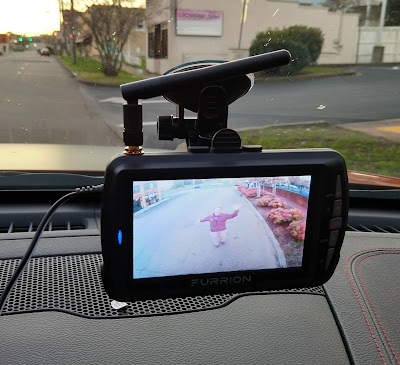 Highlight of the drive was stopping at Aretha Frankenstein's in Chattanooga - the motherland of our favorite pancakes (now available on mail order too!): 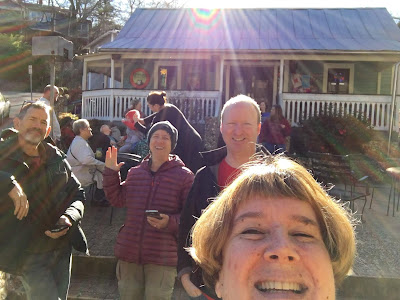 The cafe was worth the detour, totally funky and fun: 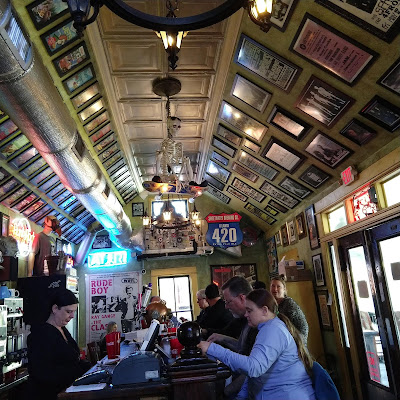 With an occasional glimpse of Mr. Spock for some reason?  Was this real? 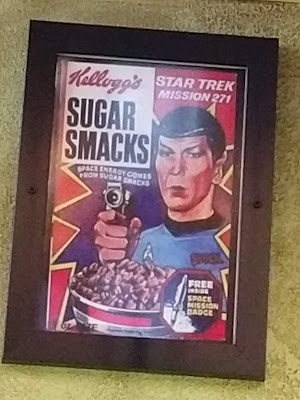 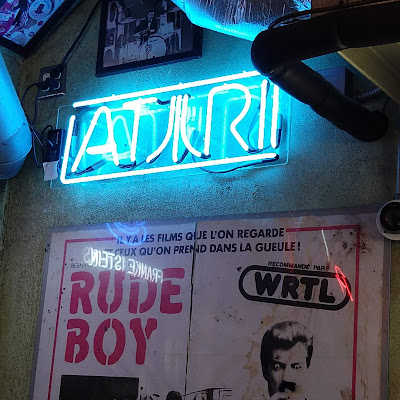 The pancakes are amazing, either by themselves or loaded with toppings: 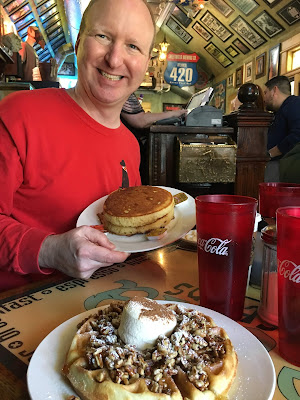 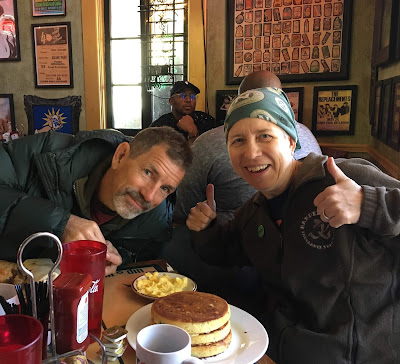 Random Spocks on the walls: 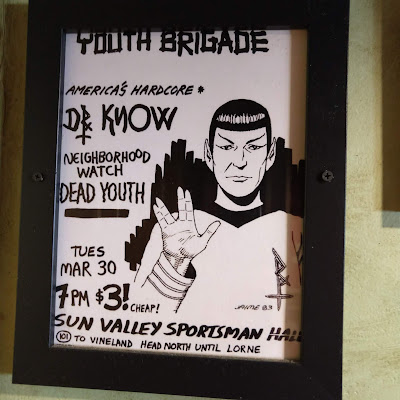 Anyway, we eventually tore ourselves away from the breakfast joint and continued down the road.  What a lovely day for driving.  It was still dang chilly (close to freezing some nights) but we were super lucky with the sunshine most of the week.

It made for great views from the lodge at Lake Guntersville State Park - here's a look at the campground down by the lake: 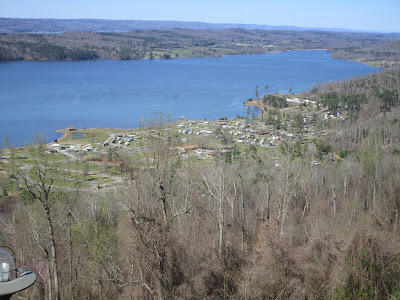 Everything about the place was really nice, so much that we kept saying, "this is a state park?" 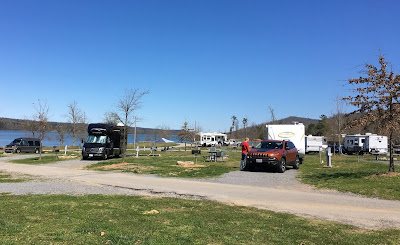 As much as we would have liked to bring Howie along, it was too much of a drive from California this time around.  Maybe next year!  Instead Kathy and Bob loaned us a "Tent Mahal" complete with giant air mattress, and we were almost just as comfortable: 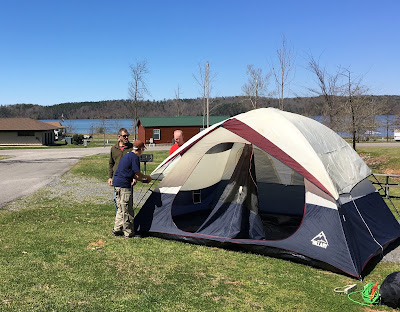 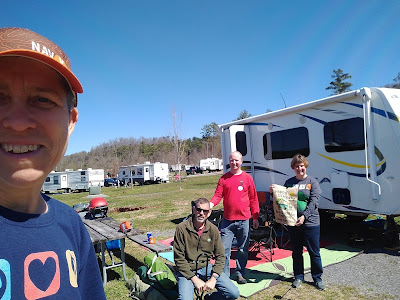 A display at the lodge suggested there were birds to watch for: 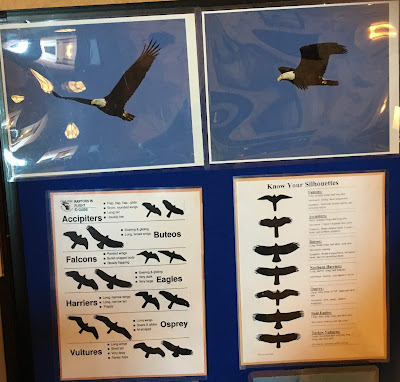 The guys were on the lookout: 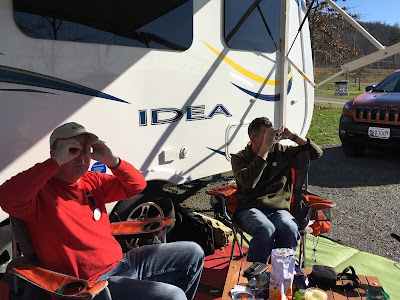 The summit organized a co-working space in the campground, which was great for setting up a computer, getting on WiFi, doing a bit of work: 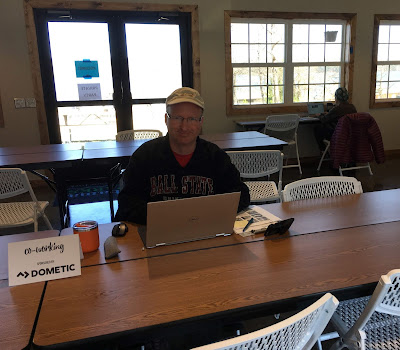 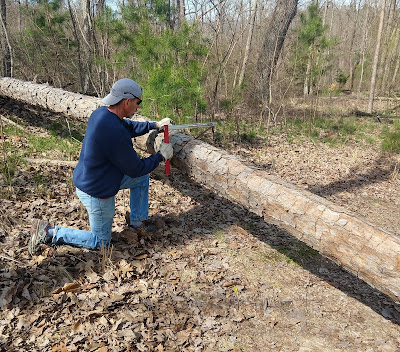 That log was a bit on the large side for John's travel saw, so I left him to work on it while I did a loop run.  Here's the progress he'd made when I returned, lots of smaller pieces to eventually get close to making it all the way through: 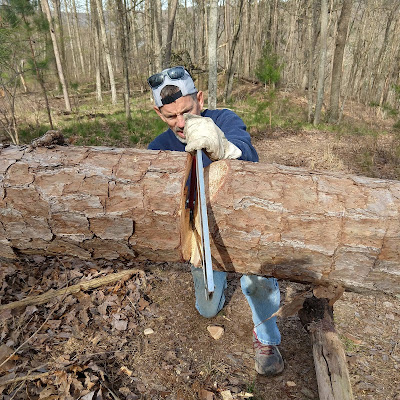 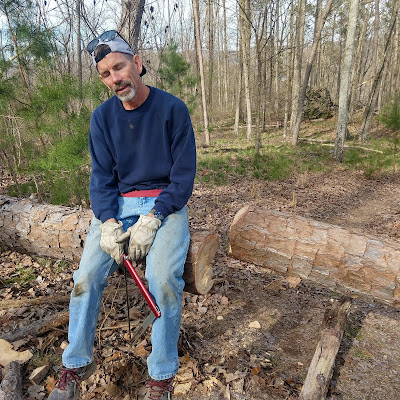 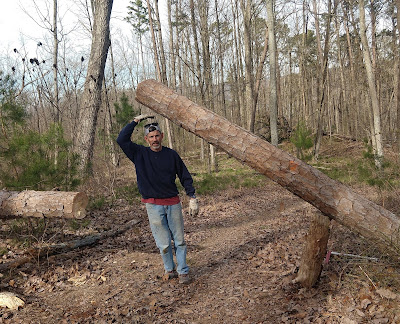 Early in the week (before the start of the conference) there was a group dinner to meet up with whoever was there early.  It turned out that a whole bunch of folks came in early, cool!

And the view out the window of the restaurant was lovely: 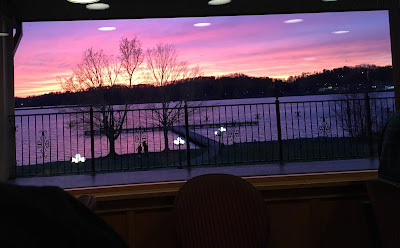 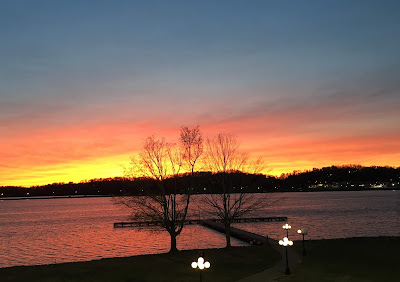 Bob and Kathy enjoying the evening: 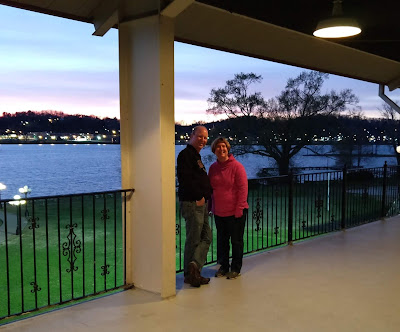 With a few of our new friends!  An excellent way to start the week. 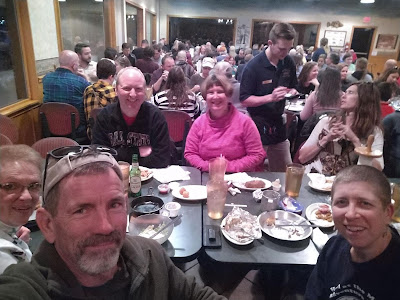