Around town in Boise

First, on the way to Boise, a short break to walk around Mountain Home, Idaho.  While there, we had to get a look at the Penny Wall: 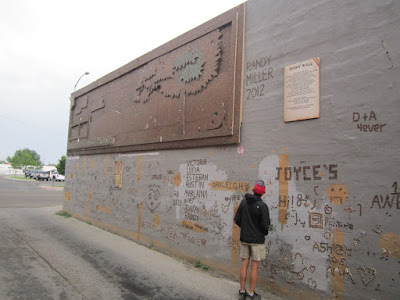 It's made of pennies, I guess obviously.  Here's an explanation: 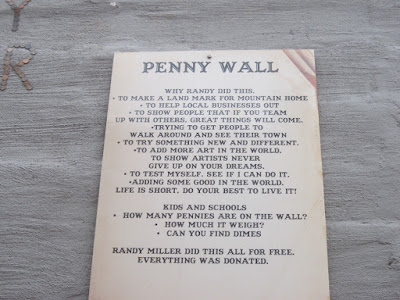 Yep, lots of pennies!  Quite a neat topo map type piece of artwork. 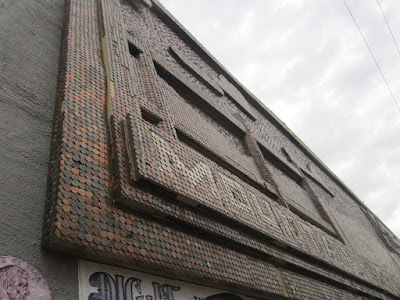 OK, on to Boise!  We mostly used this stop for resupply/errand running, but also found time to bike downtown along the path along the river.  Right from our RV park, most convenient.  The bike trails and trees and parks make for a very nice downtown.

Our first foray was in the evening for First Thursday (and yes, I just revealed how late this posting is!).  We biked down, investigated several galleries and partook of $1 Ben & Jerry's scoops, what a deal!  We also happened to walk down a side alley where a couple guys were working on mural paintings, to discover it was a once-a-year event where the entire alley gets new murals.  It was quite a sight!  They were setting up flood lights so they could work all night.  It wasn't so easy to capture photos in the growing dark, but I've got some in the daylight further down this post.

So, that was a fun evening and a nice intro to Boise.

Long run day, with a camera.  First stop - watching a bunch of people surfing in the river, another "something new" for me to see: 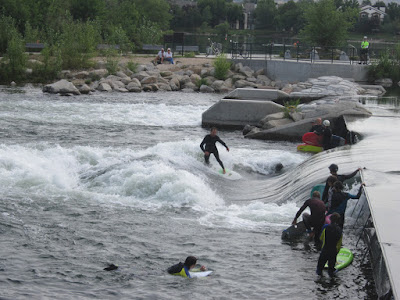 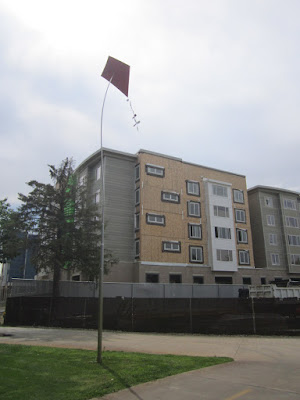 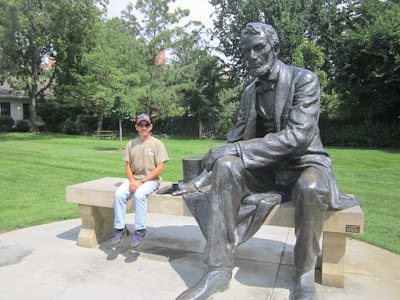 Confirmed, it's a Giant Lincoln.  He likes to hold things in his hand: 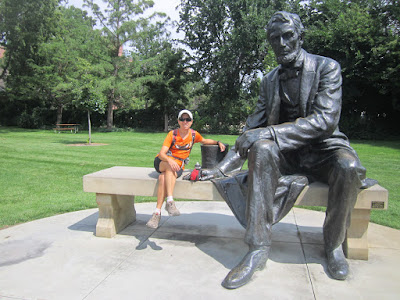 I journeyed up into the nearby hills on some trails and happened to spot a coyote walking across the trail and down into the field.  Awesome.  He didn't hold still for a picture, so here's kind of some indication that he's there in the grass (enlarged and cropped): 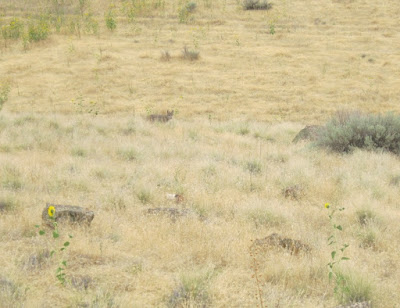 View toward downtown from the barren hills (there are many more trees in the valley compared to outside the city): 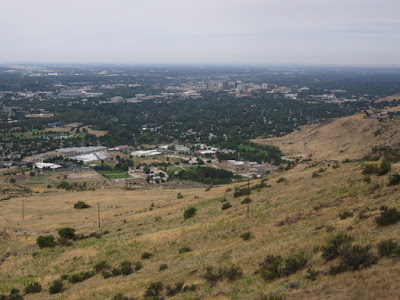 A top-down look at the old penitentiary: 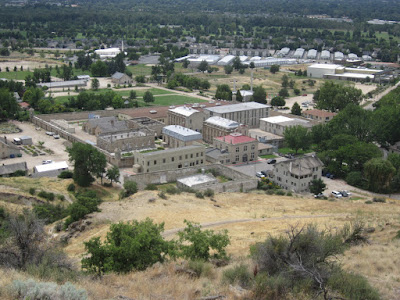 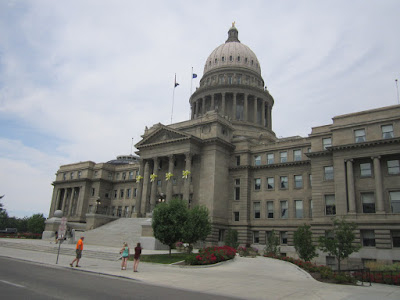 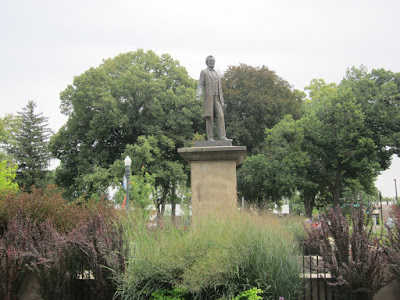 "Hospitality of the Nez Perce": 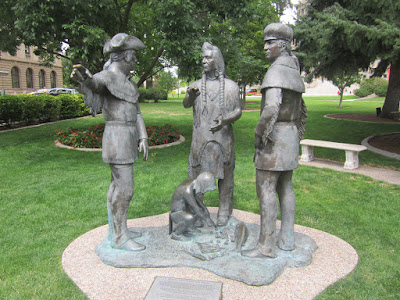 Basque Mural (there is definitely a basque influence here): 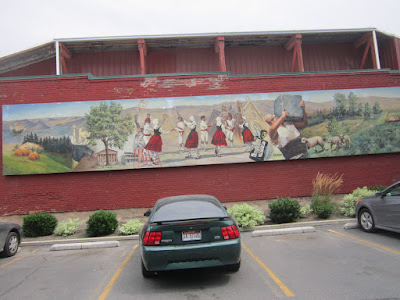 Another interesting piece of outdoor art: 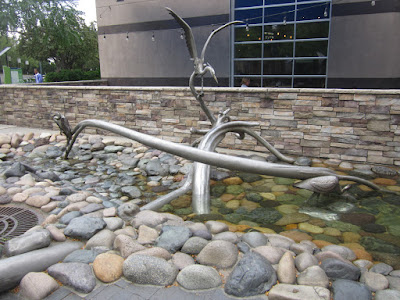 I captured on film a bunch of the murals from the funky alley that the artists had been working on all week.  It was hard to cull, so I just threw a bunch in this post: 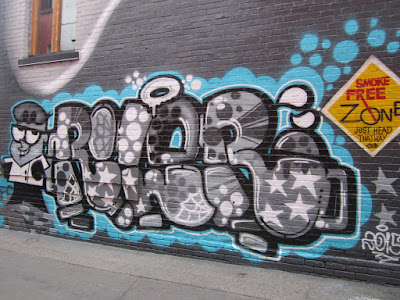 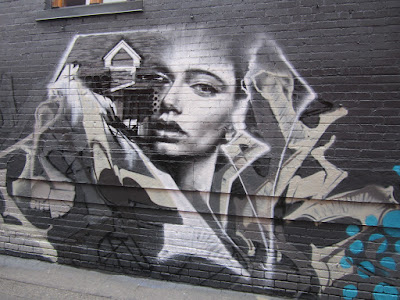 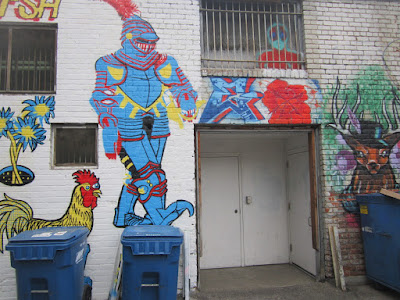 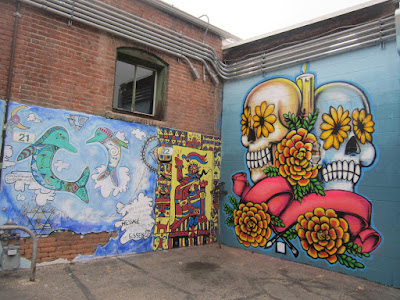 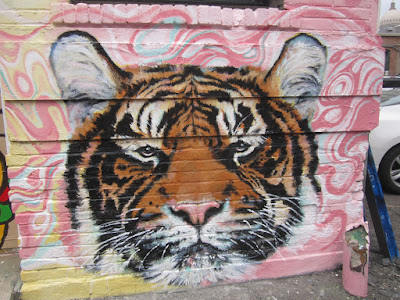 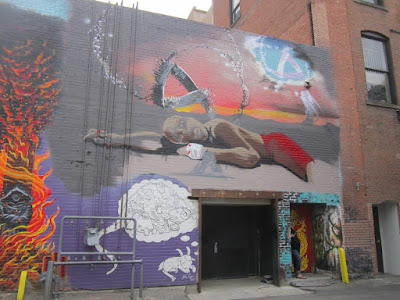 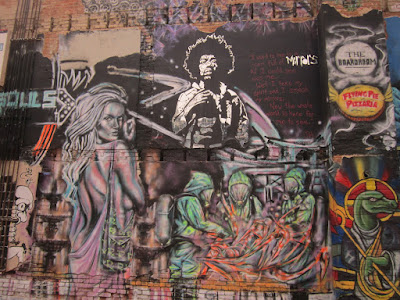 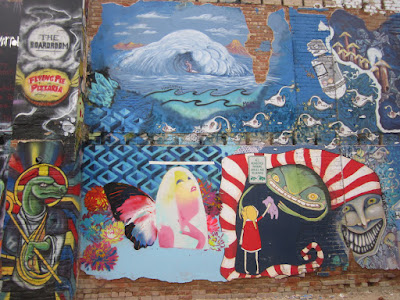 Pretty neat that we got to see many of them "in progress."

John on the bike path near the RV park, hi John! 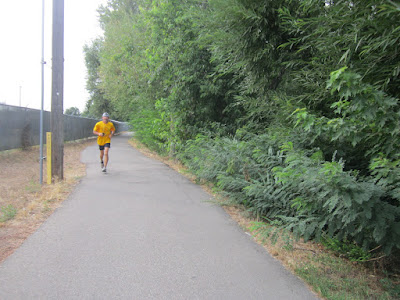 We were heading to the nearby track to watch the horse races from the back.  It was a different experience from seeing it in the stands, missing a lot of the hoopla of the setup and finish, but in return getting to watch the horses speed around the back side.  Even with thundering hooves it was remarkably quiet, and we could even hear the jockeys talking.

Well, I tried to get a picture of the horses but gave up after one shot (and didn't hang around for enough races to try again).  Here's the track with the stand across the way: 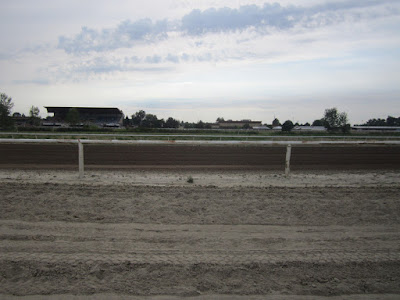 Overall we fit quite a bit in and still got a lot of errands done, so that was a successful visit to Boise.

That's the last I have from Idaho!  Next we spent a week at Mount Rainier, and I have a couple posts queued up for that.  But it will have to wait, as I'm starting another project that will occupy my time for a few days.  Stay tuned!