Sierra Rogaine with Kip and Dave

A rogaine in California, yay!  We were psyched that it fit into our travels, Kip was excited to do it (no poison oak!), and then Dave decided to fly out for it.  Very cool.  I was in the middle of multiple other races so I went conservative with the 4-hour solo version, while the guys teamed up to run around in the woods together for 8 hours. 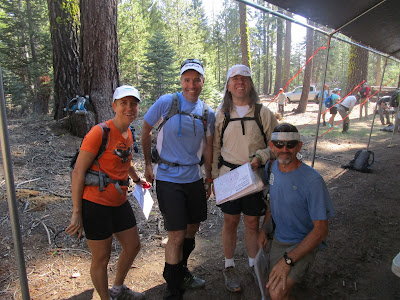 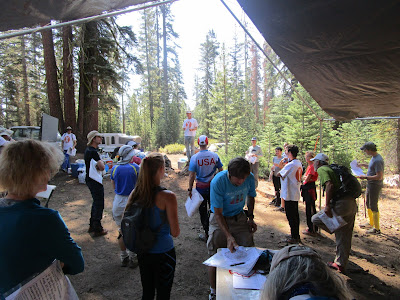 Last minute map check while listening to the race director: 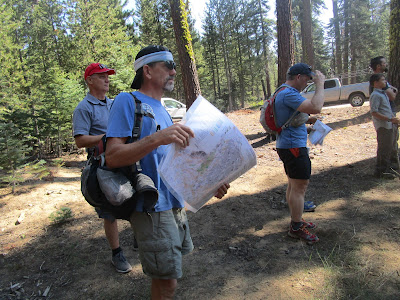 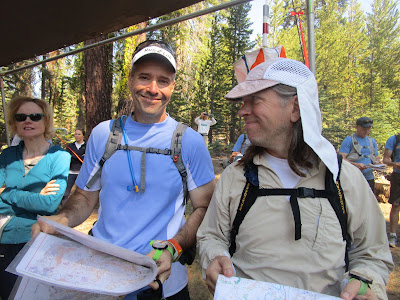 A late water drop addition, and a portion of the race map.  I came through this section from #88 to #33 (skipping the water drop) and down the road to #39: 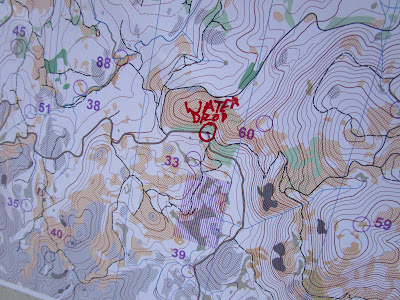 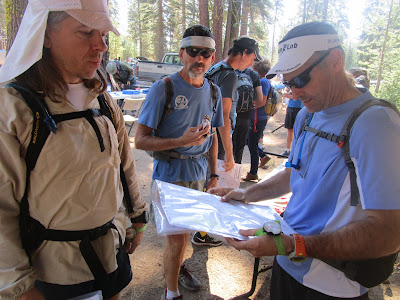 The 8- and 24-hour races started an hour earlier than my race, so I got a couple shots of the guys running down the road: 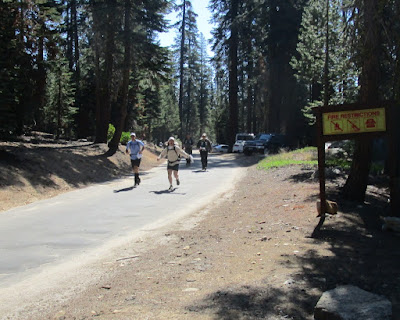 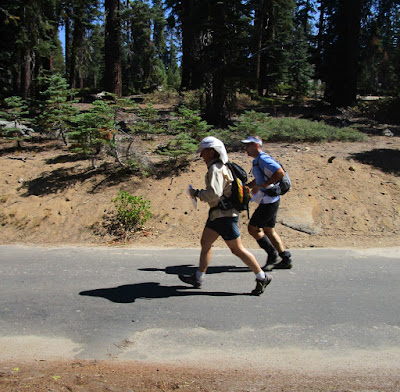 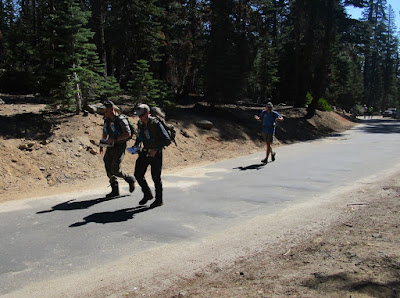 They started on the road, going north and east to some high value points off in some canyon or something. 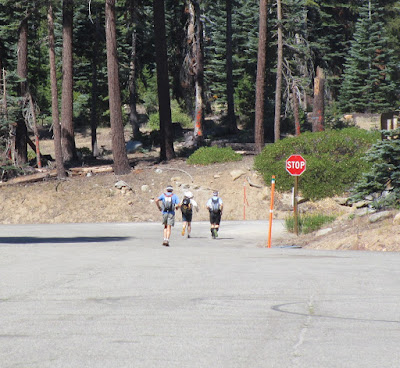 I had less time to work with, so I focused on the section to the south of the start/finish.  Starting with a couple connector points, I ran down the road and pushed through the woods to find #45 in a field.  I wasn't quite as precise with the pace counting as I could have been and spent an extra minute finding the control.

Even though I had just left the path to get to #45, when I went southeast back toward it I couldn't relocate the trail.  Based on the contours, I decided I must have passed it up somehow, so I turned south to find a little dry ditch and followed it to #51 at a ditch intersection.  I hoped the next trail to the northeast was more obvious, and it was.  Everything worked better finding #38 and I was now rolling along OK.

I cruised up the trail to bag #88 and continued running along trails and roads, now going southeast.  I heard some 4-wheelers but never had to deal with any vehicle dust.  An unexpected/unmapped little trail took me almost directly to #33, that was nice (and fast).  I worked back up to the road and ran around to #39.

A little more road and then I was in the gray area - the good kind, the solid bare rock that provided excellent footing and fun running.  A beautiful cool, sunny day, a nice breeze, awesome scenery, feeling great and running well, and no spinifex!  I was so happy I was practically bounding along (I might have had my arms outstretched in glee...)

#55 was at the top of a knoll with a view of the next several areas I'd be going to, and it was so neat to get glimpses of the course in all directions.  What a marvelous place for a rogaine!  I was honestly wishing I could have spent 24 hours out there.

I bopped on down to cross a dry creek bed and climbed another hill to a trail.  I had debated a couple times about the route choice here, finally going with the slightly roundabout trails that also went up and down a bit more than was probably necessary.  On the steeper slopes I was second guessing this decision again (or maybe that would be third guessing) but eventually I found #47 no problem, so at least the navigation part wasn't a challenge.

I really enjoyed the nav through this area, with the interesting contours and fun little shapes to translate from the map to real life.  Also that you could pretty much go in whatever direction you chose, except where it got steep and cliffy in a couple spots.  Night nav out here would be awesome.  Not even too much vegetation to slow you down.

Except every once in a while, crossing marshy areas - which were currently dry, just full of low plants and some deadfall.  I pushed through one of those to get to a trail, then more interesting nav to reach the most curious control, on the side of a granite dome.  It was worth 100 points so I was motivated to find it.  The clue sheet noted, "Can be approached from NE with care."

This was a bit of a challenge for me, trying to traverse some steeper slopes and work around to the back of the dome.  I gave in to the idea that "maybe the control is a little lower down," not wanting to get caught too high up and not seeing the bench that the contours had suggested.  It's easier to climb these things than descend them.  And it looked like an easier route down below, to be honest that was probably the reason I dropped down to it.

So yes, I had to climb back up to the control once I found the proper little reentrant, but I kind of expected that.  I did traverse directly back to the saddle to exit the area and found myself exactly where I had turned around to descend.  Also not unexpected, that's pretty much what I do when I'm on higher rocks without John to help figure things out.

That control took some extra time, so I better get moving.  I was motoring along quite nicely, dealing with the higher altitude and faster breathing.  Time constraints are good motivators, and I had given myself an interesting challenge in taking on a long-ish loop for the 4 hours I had to work with.  Good terrain took me fairly easily to the area of #79 on a narrow spur.  Steepness and tall rocks slowed my finding the location of the control, but I got it eventually.

Moving quickly, I reached the base of the climb up to #100.  I wasn't sure about the steepness of this large outcropping with cliffs to either side, but from the base it appeared I could just walk straight up, so that's what I did.  Shades of Enchanted Rock (in Texas) on that one, although not nearly as high.  Solid granite is awesome!

#100 at the top, catch my breath a bit, run across and down to the next trail.  I converged with a couple other teams going to #40, then ran down and across to #35.  This one was in a deeper forest, breaking out into a tiny clearing to find the control.  Happily I took a good bearing on that one and didn't have to search more than a couple seconds for it.

Another fun trail, hello to another couple racers, cutting off the trail to traverse another long solid rock with a couple innies along the way.  #95 had another great view, but I needed to stay focused and try to breathe and think at the same time so I was slightly less appreciative by this point.  Time was running out.

Run, Marcy - OK, hike, Marcy - up a small bowl and then across to a big drop with #62 partway down, then more drop down to a trail at the bottom.  I thought I might have time for the out-and-back to #52 but it turned out I needed to skip it at this point.

I pushed through some trees to #50 in a meadow, getting closer to the finish now.  My last control was down into a drainage area, so I hauled butt best I could down the hill, making sure to keep my footing and trying to find the best routes through the trees.  Finally the little road at the bottom, run around, off the road and through a bit more woods, come on control where are you?, follow some beaten down grass from previous teams, there it is!  #44 in the books.

Now to find out whether it was a good decision to come down the hill for this one; I hauled myself back out to a trail and started to climb.  Run - walk and breathe - run a little - breathe - check the watch - run a little harder...

The trail topped out and then I could see the intersection up ahead, mostly because other racers were coming through my field of view.  One guy I could see was faster than me.  Then a woman, and I was close enough that I reached the intersection first.  Even though the odds are very low that we had the same number of points (the only time our finish times would matter), I ran hard enough to stay ahead and punch the finish flag first.  You never know, would hate to lose it in the final seconds.

It turned out I hadn't needed to run so hard, as I was solidly in 2nd place overall behind a guy named Matej, with the woman (Anastasiya) in 3rd.  That was super fun!  Now I can sit and catch my breath!

Later in the afternoon the 8-hour teams started coming in, and look who's here!  I think John was the one with the punch, bring it home John! 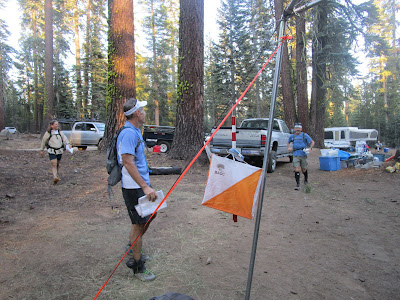 And - they are done! 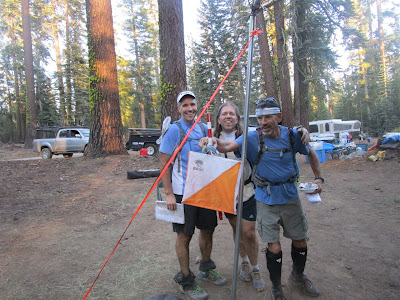 Sort of a selfie, with John playing peek-a-boo: 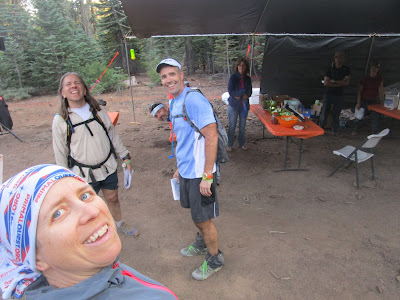 That was a most excellent weekend, thank you Kip and Dave and John for the travel company and for enjoying these things as much as I do!

A couple other highly random shots from our days in California - we found Australian soda at the Good Karma restaurant in San Jose! 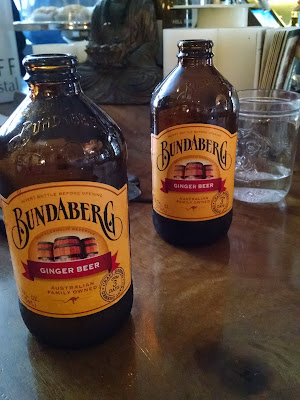 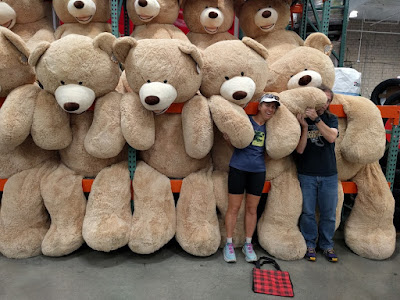 We always enjoy California, can't wait to go back again.