We hadn't planned on being at the Challenge Nation national championship.  But Spencer qualified in Austin and he was looking for a teammate - and we were already in Las Vegas.  We couldn't pass up such an opportunity, a chance to race with Spencer and a day of clue racing against some of the best urban race teams in the nation.  We're in!

John is running well these days, and being the faster of our pair, he was the logical choice as Spencer's teammate.  I got to play ground support, an interesting role that I don't normally get to try.

It was a beautiful day in downtown Las Vegas, go teams! 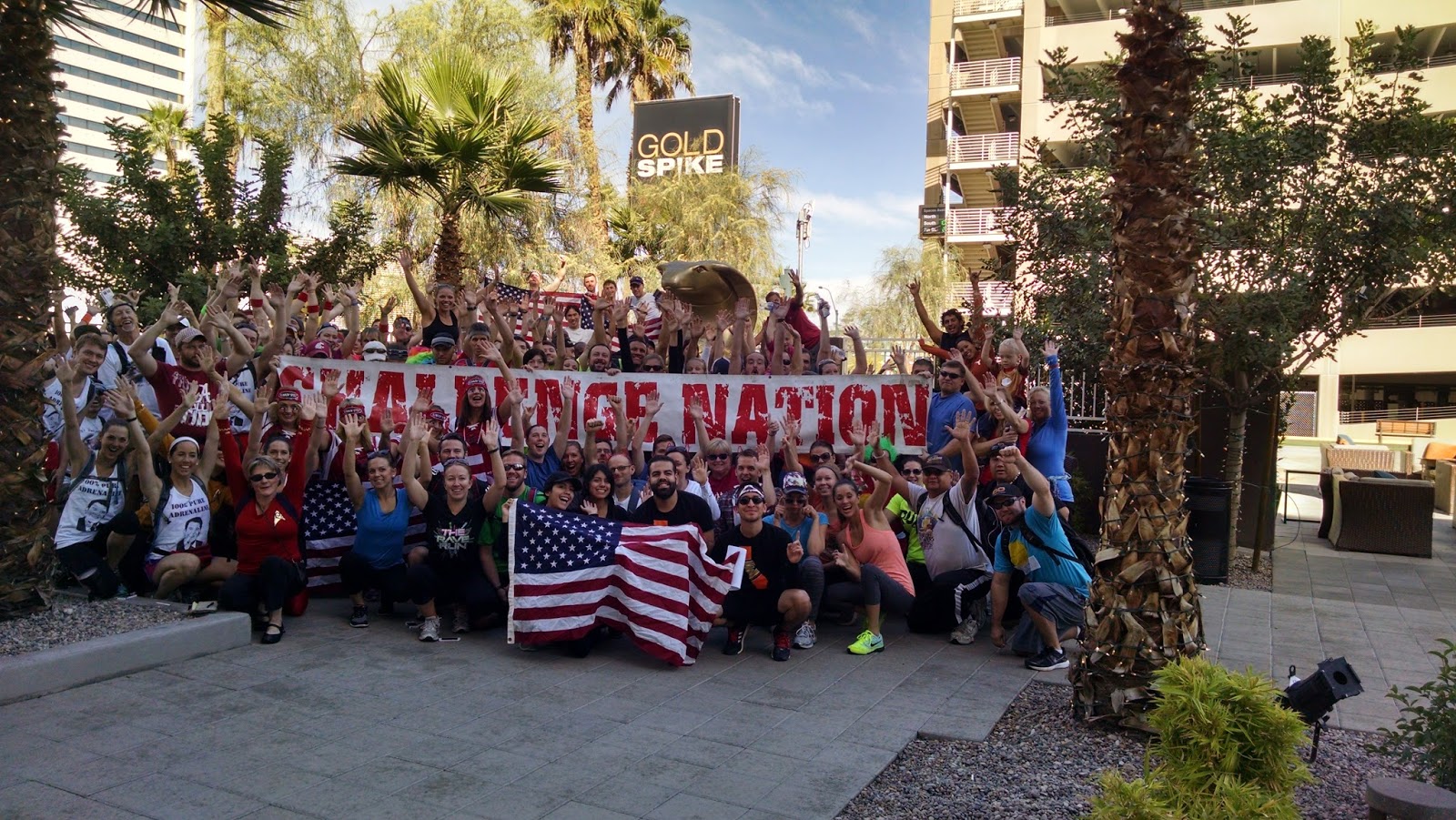 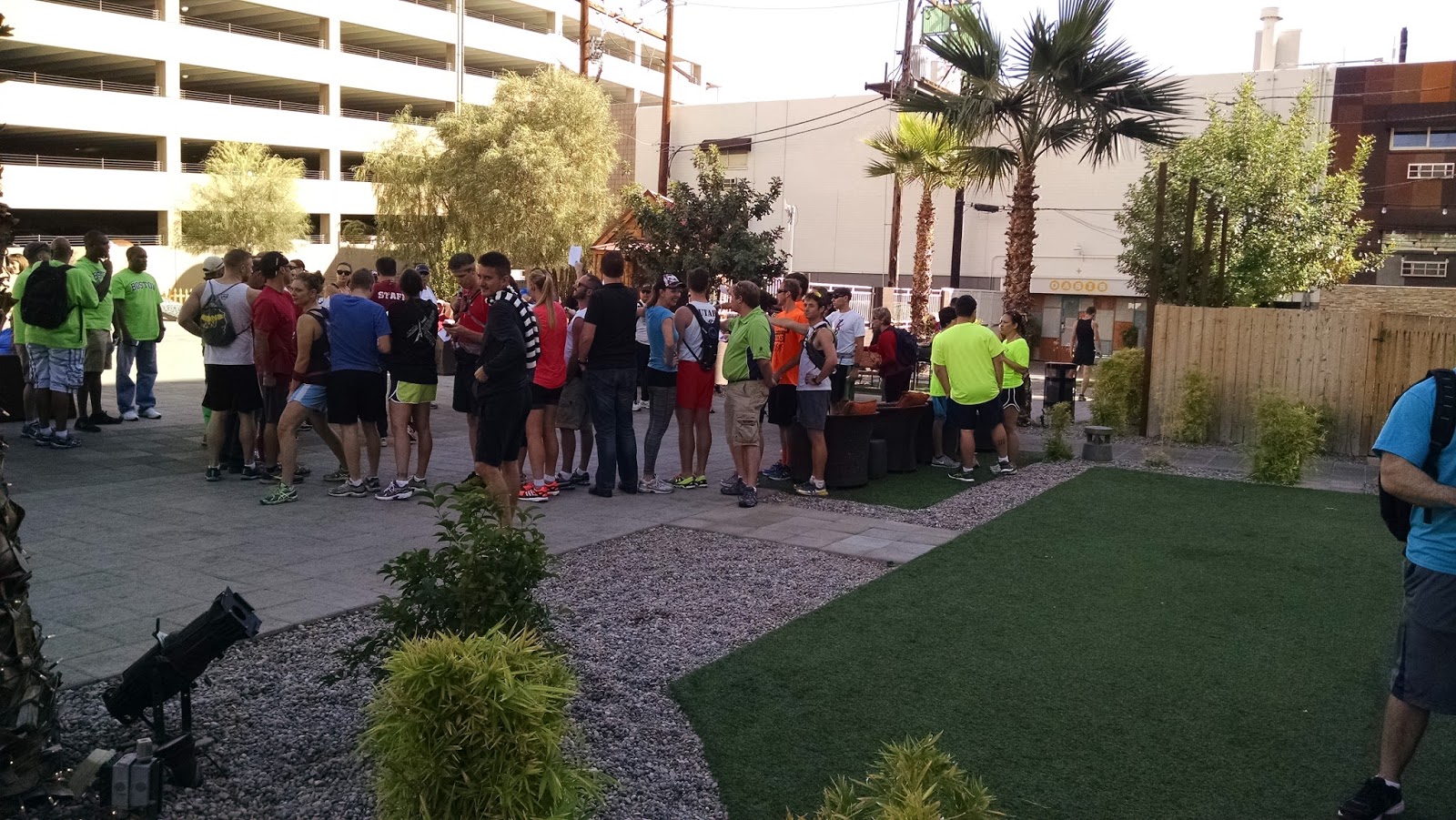 John got the cluesheets and the team was off and running!  They caught a bus and headed for The Strip while I stayed downtown to see what I could do from there.  John mentioned that he saw a guy on the bus with a Quebec City marathon shirt, funny because we ran that marathon and we were wearing the same shirt the week before.  It was marathon weekend in Vegas, never know what shirts you'll see on people from around the country and the world.

First stop for the team - the JFK exhibition near New York, New York: 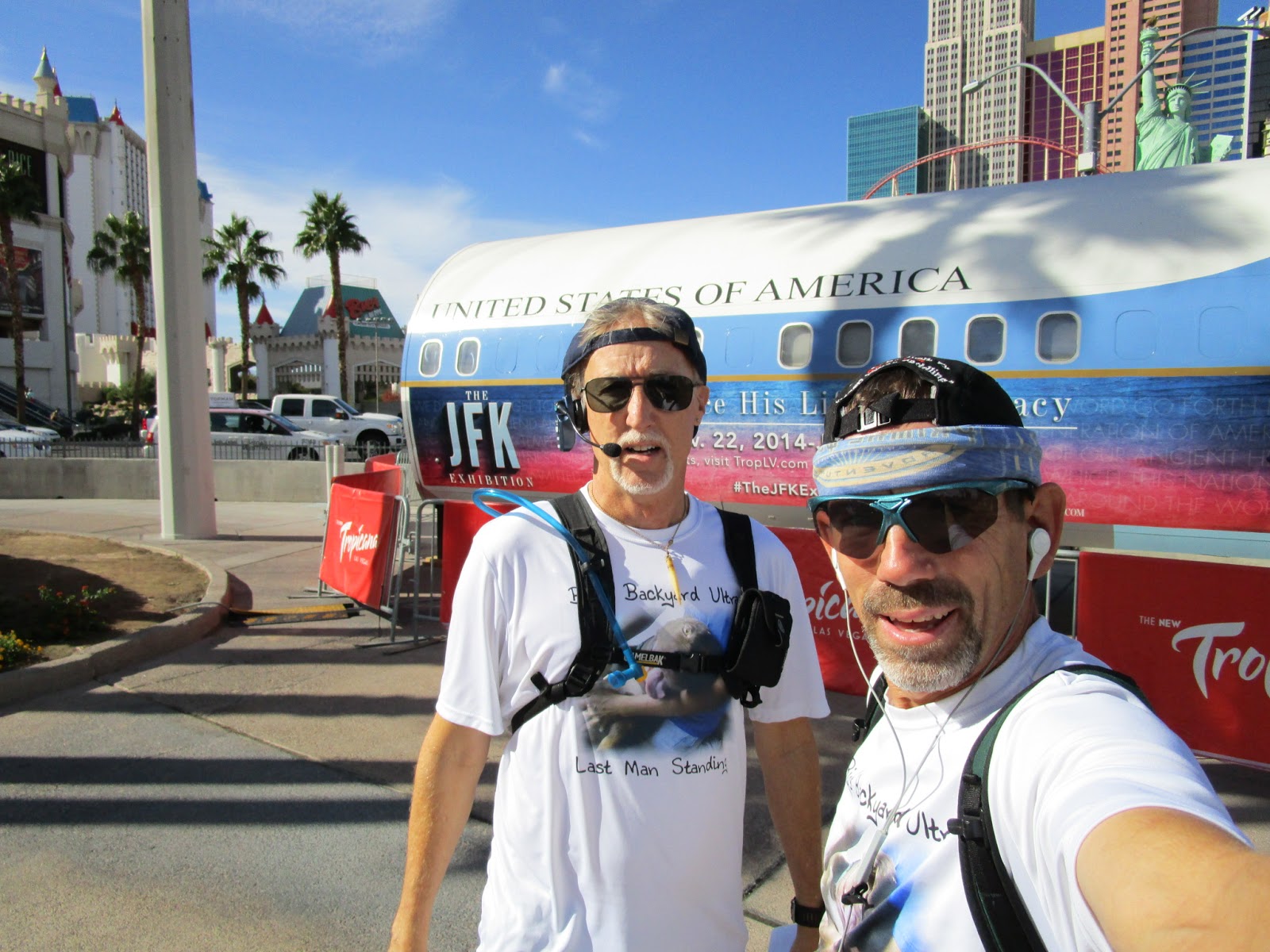 Then to NY NY itself for a photo with a few strangers and a plaque: 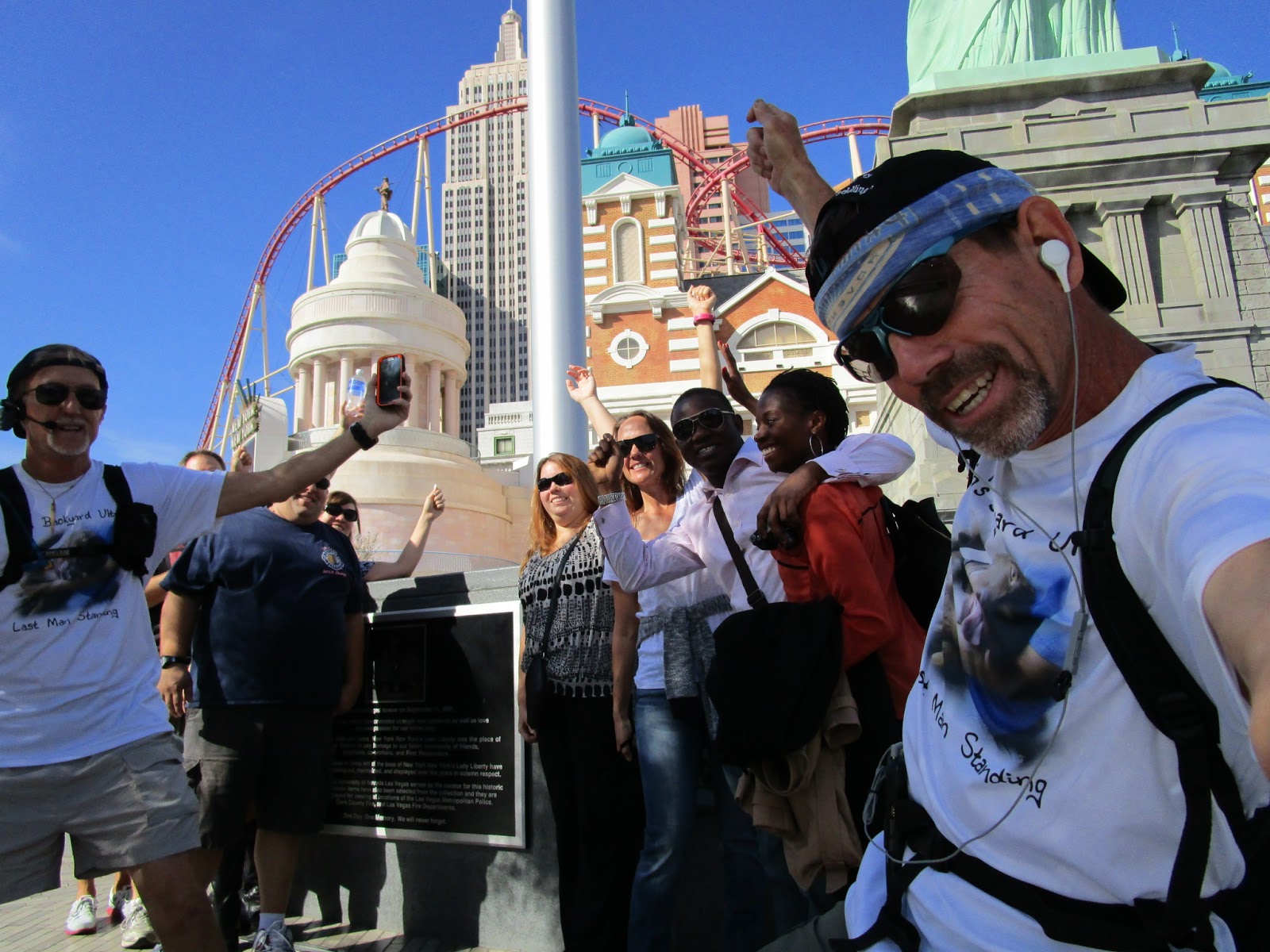 The team opted to skip the "Welcome to Las Vegas" sign further south, instead starting back north toward downtown.  They were at a bus stop when an express bus came by - but it didn't stop at that stop (being an express bus and all).  John sprinted super hard toward the next stop to catch it, and the number of people getting on allowed him to get there in time, enough people that Spencer caught up to the bus as well.

A nice local guy on the bus that helped them figure out which stop to get off at, with the next CP at Circus Circus.  Once at the casino, their timing wasn't such that they could catch one of the shows, so they needed the alternate option of finding a game with the sign "No Leaning".  I was privy to the next conversation where they were looking for the game and then looking for each other.  Something about "I'm near the air hockey tables" and "So am I!" then "But where are you?" "I'm waving my arms" and eventually the two clowns were reunited at the right spot: 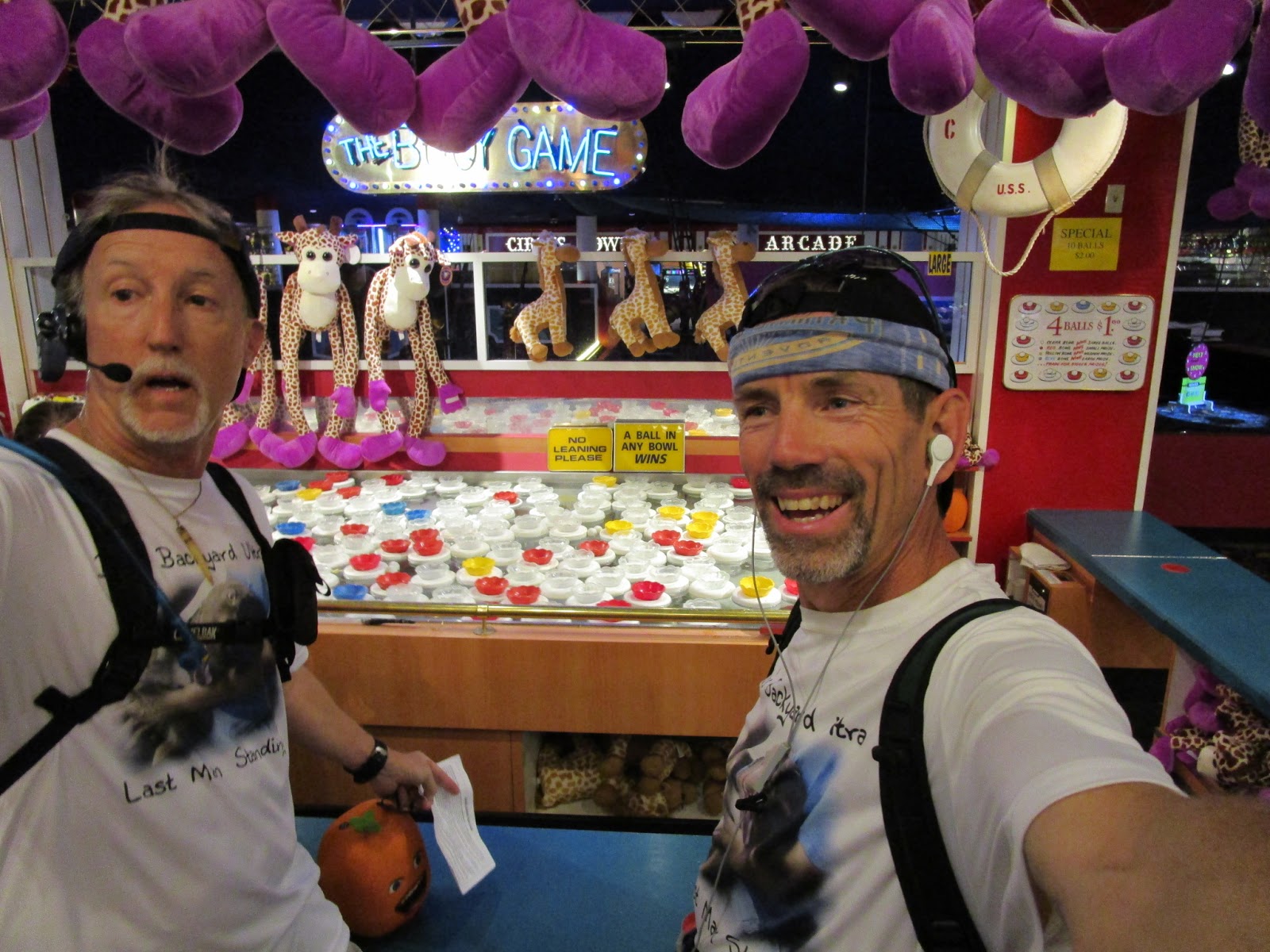 They ran north from there.  There was a truck parked on the side of the road and porta potties set up on the dirt to the side.  Also porta potties on the truck and on the sidewalk.  Lots of porta potties, is what I'm saying.  The guys plotted a route through it, but just as they got there someone unexpectedly moved some porta potties from the dirt TOWARD the truck.  Spencer got through fine but John had to do some dodging.  He reported in that "John almost got nailed by a big purple john."

On to Alex Pressley's Unique Boutique for their photo with Elvis.  Elvis was apparently sitting in a different spot from when the cluesheet was written, making it an interesting challenge figuring out the answer to another CP which depended on one of the words we'd find there.  But we got it :) 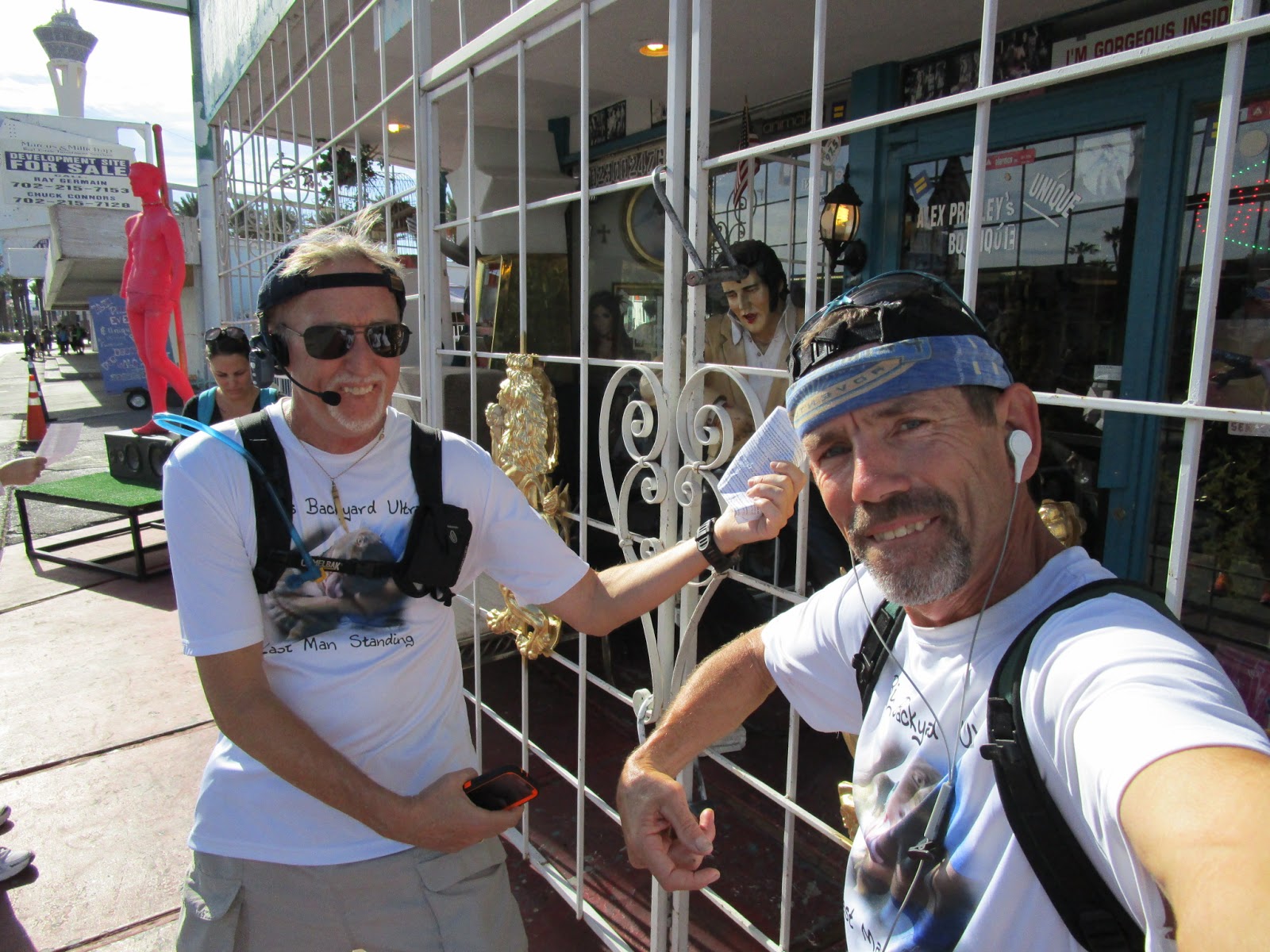 The team tried looking for a bus but didn't see one, so they ran on to downtown.  They found me in a parking lot hanging out with a license plate that fit the scavenger hunt bill (I had to work for this one!): 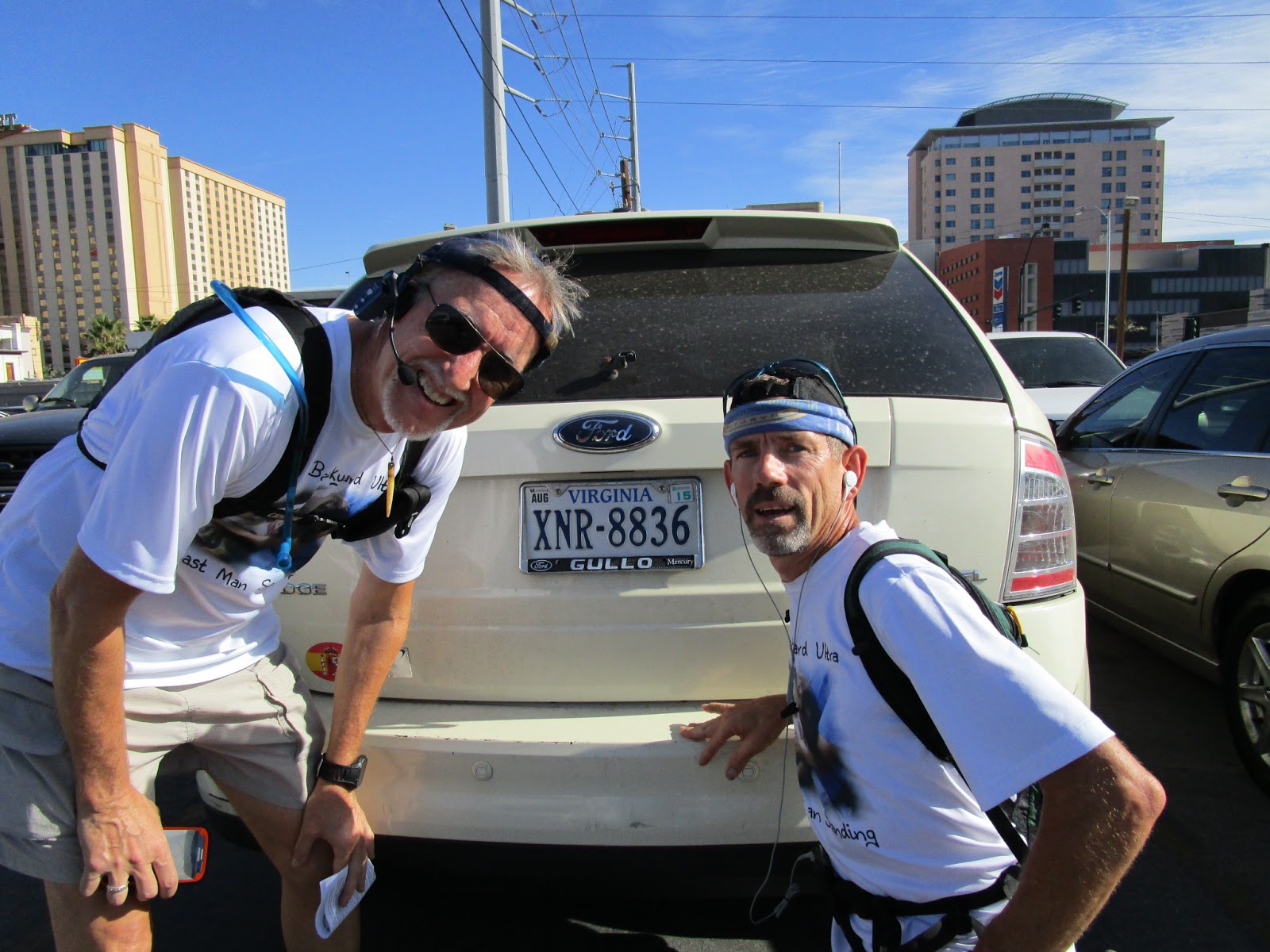 From there it was on to the BBQ competition lot: 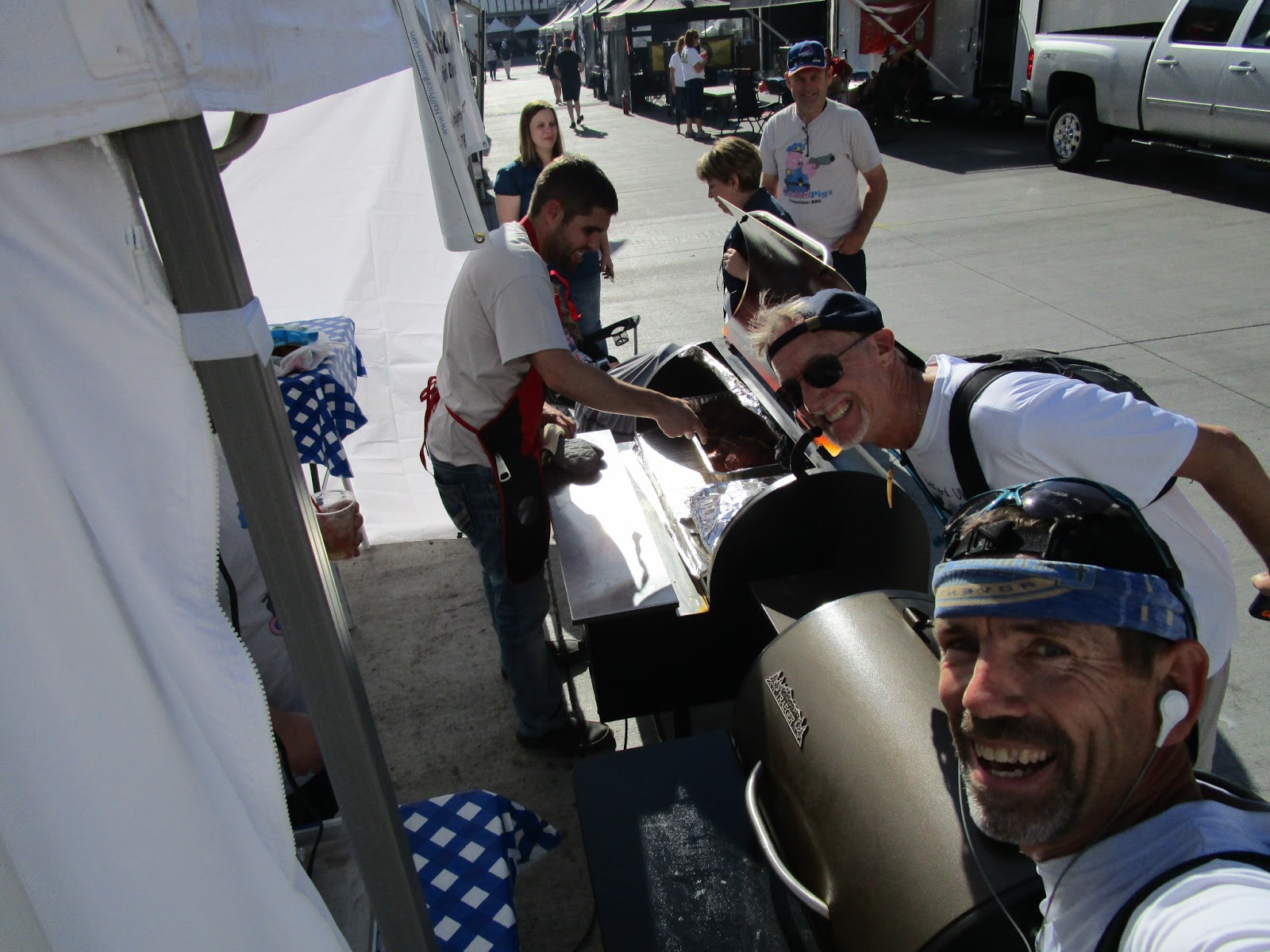 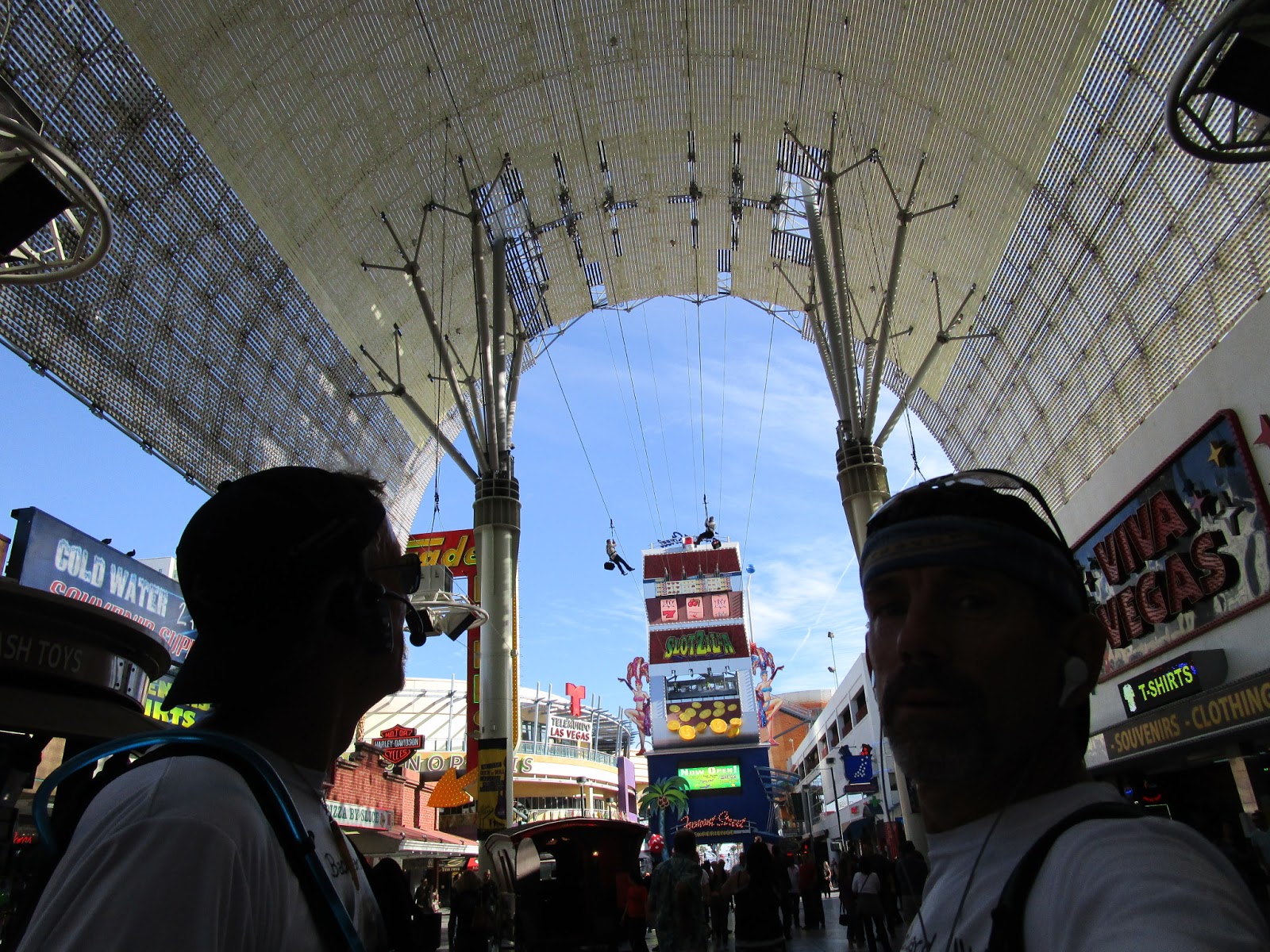 Next to the Abbey Road crossing where a couple nice ladies assisted in replicating this fun shot: 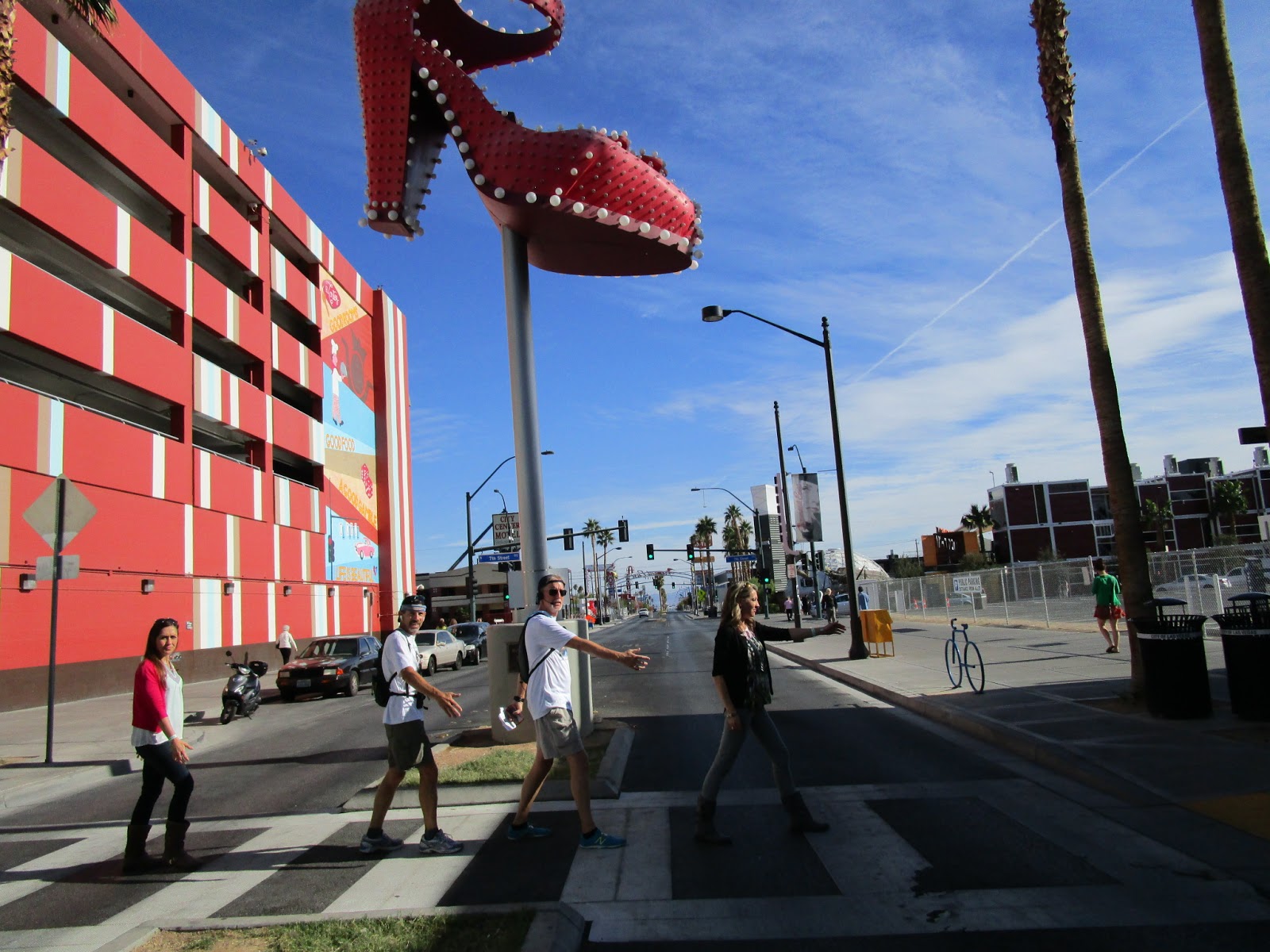 Then a quick run to the Container Park.  The guys had to steal some blocks from the kids playing there to make a tower, and the parents were like "that's not very cool" but at least John gave the blocks back afterward.  The kids just looked confused.  Hopefully it made for a crazy story and no traumatized children. 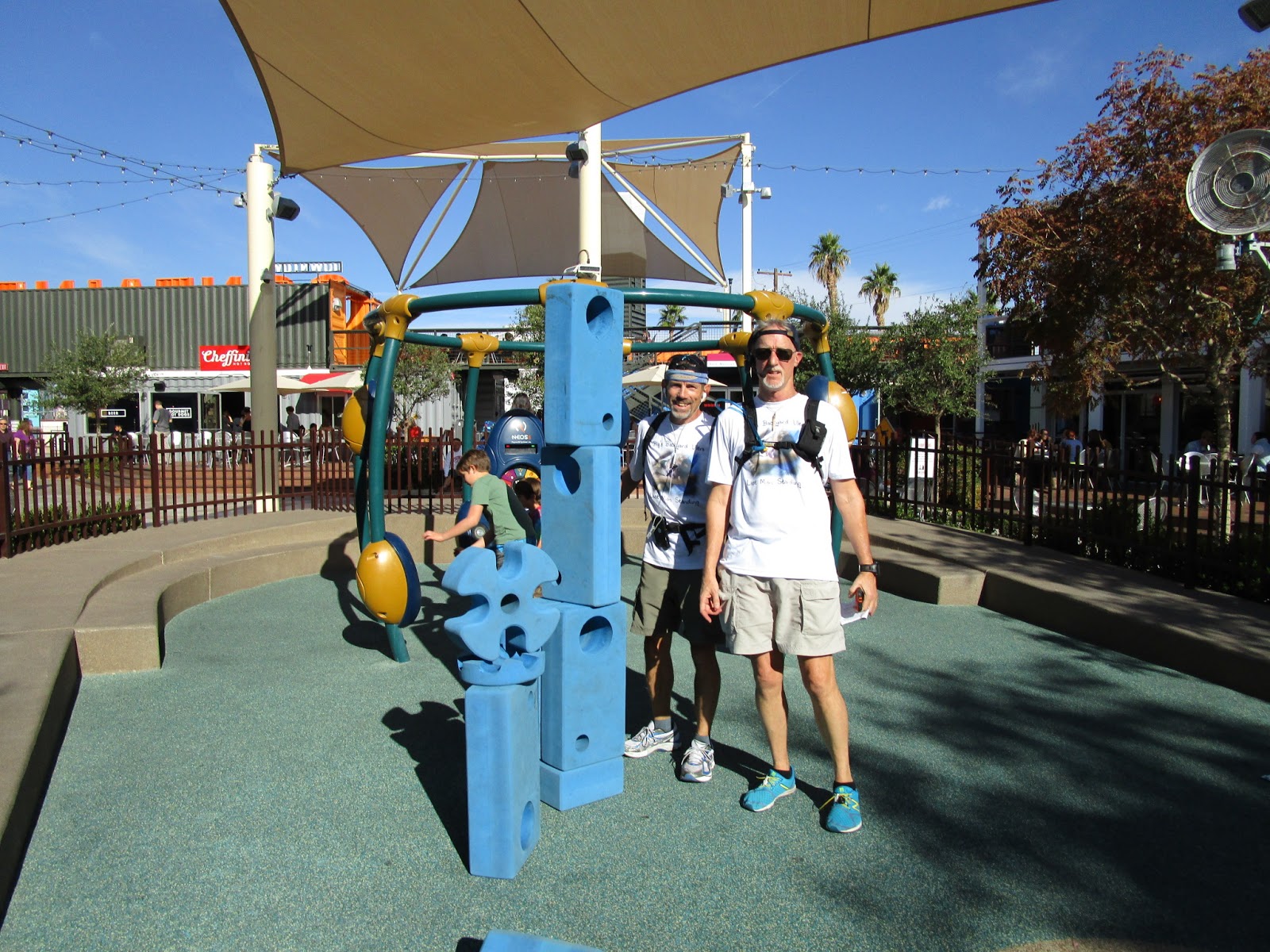 One last little run to the mob museum to find a plaque: 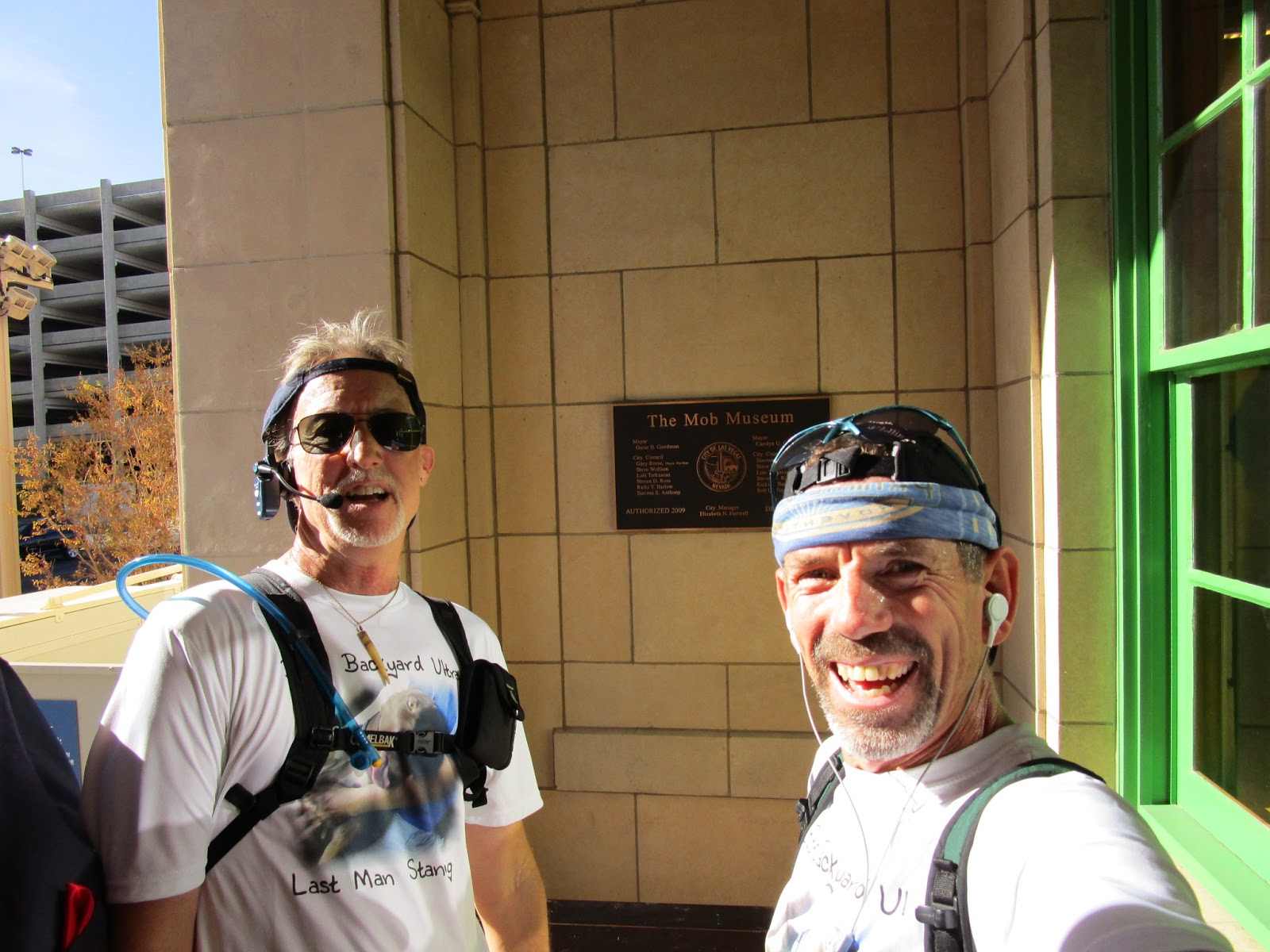 And a picture with a fan of a non-American sports team (Manchester United) (love this guy's expression): 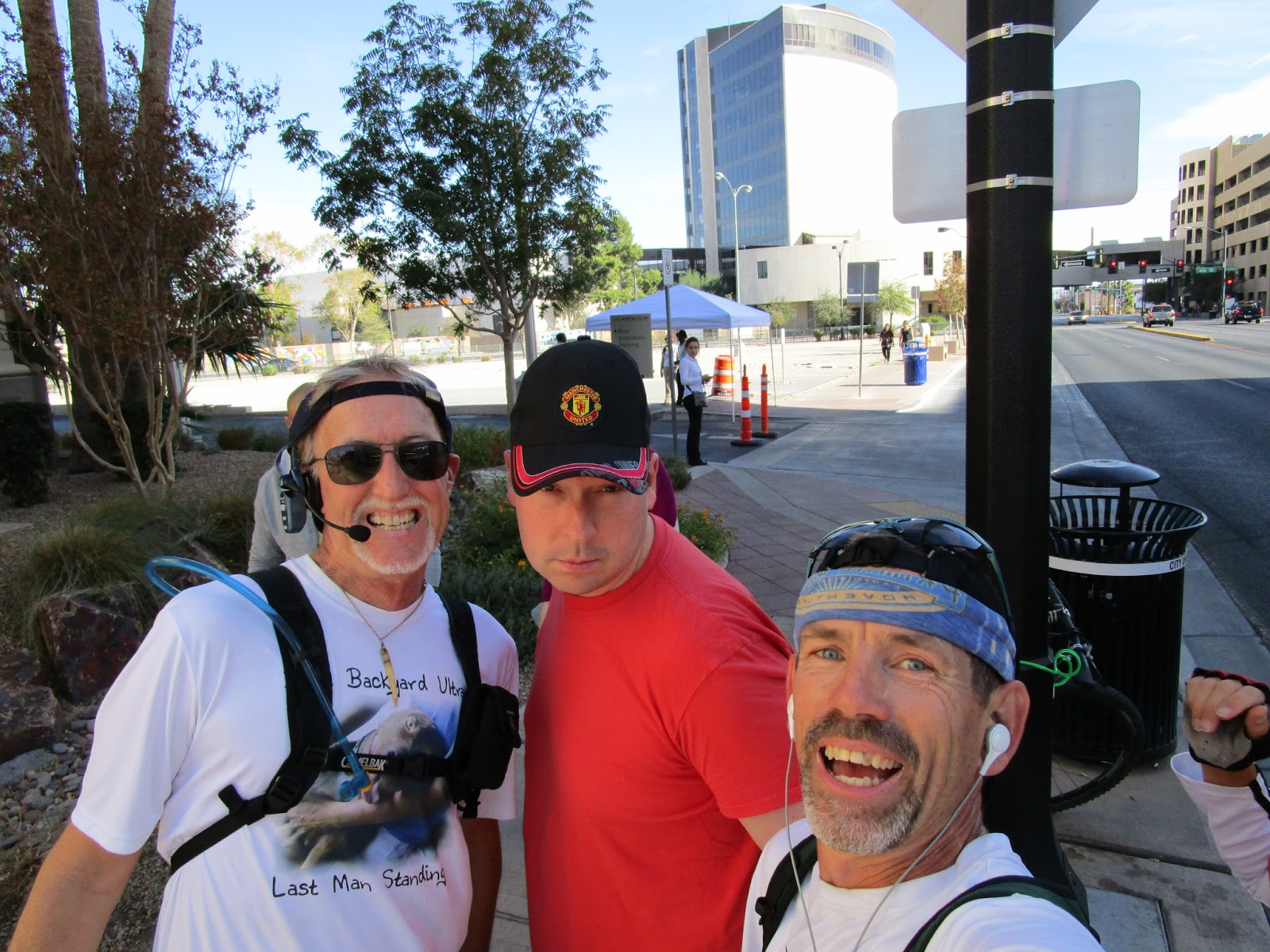 Spencer and John made it back - first team there, all pictures good, yay!

After a short rest and regrouping, the top 5 teams plus one wild card team lined up for a "Finals" group photo: 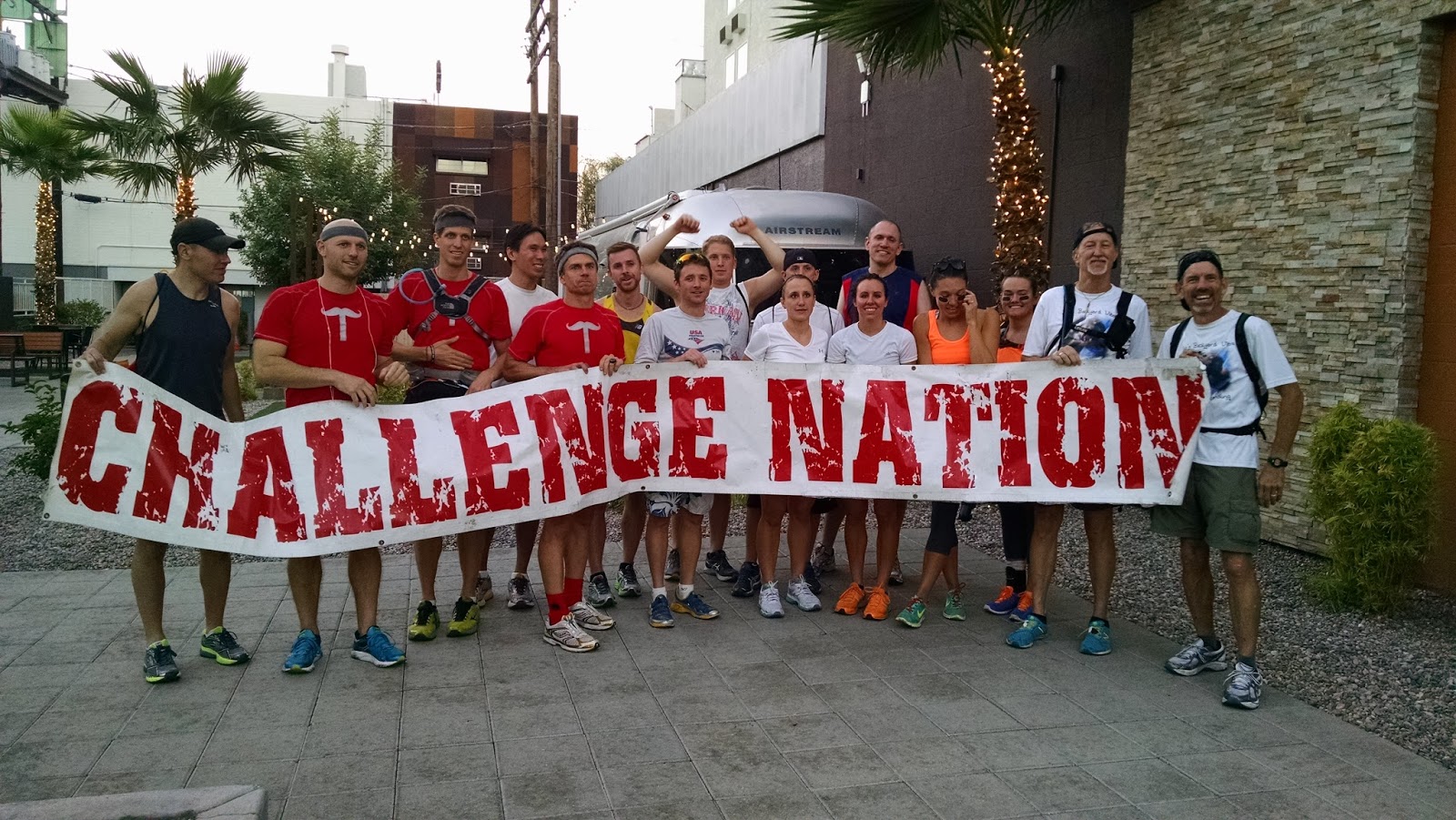 At the start of the finals, I thought I knew the answer to one of the CP's so I told them where I thought it was and sent them on their way.  Happily my brain pulled out the correct location and they found this giant rock at the Detention Center courtyard (and happily, that was also the correct answer): 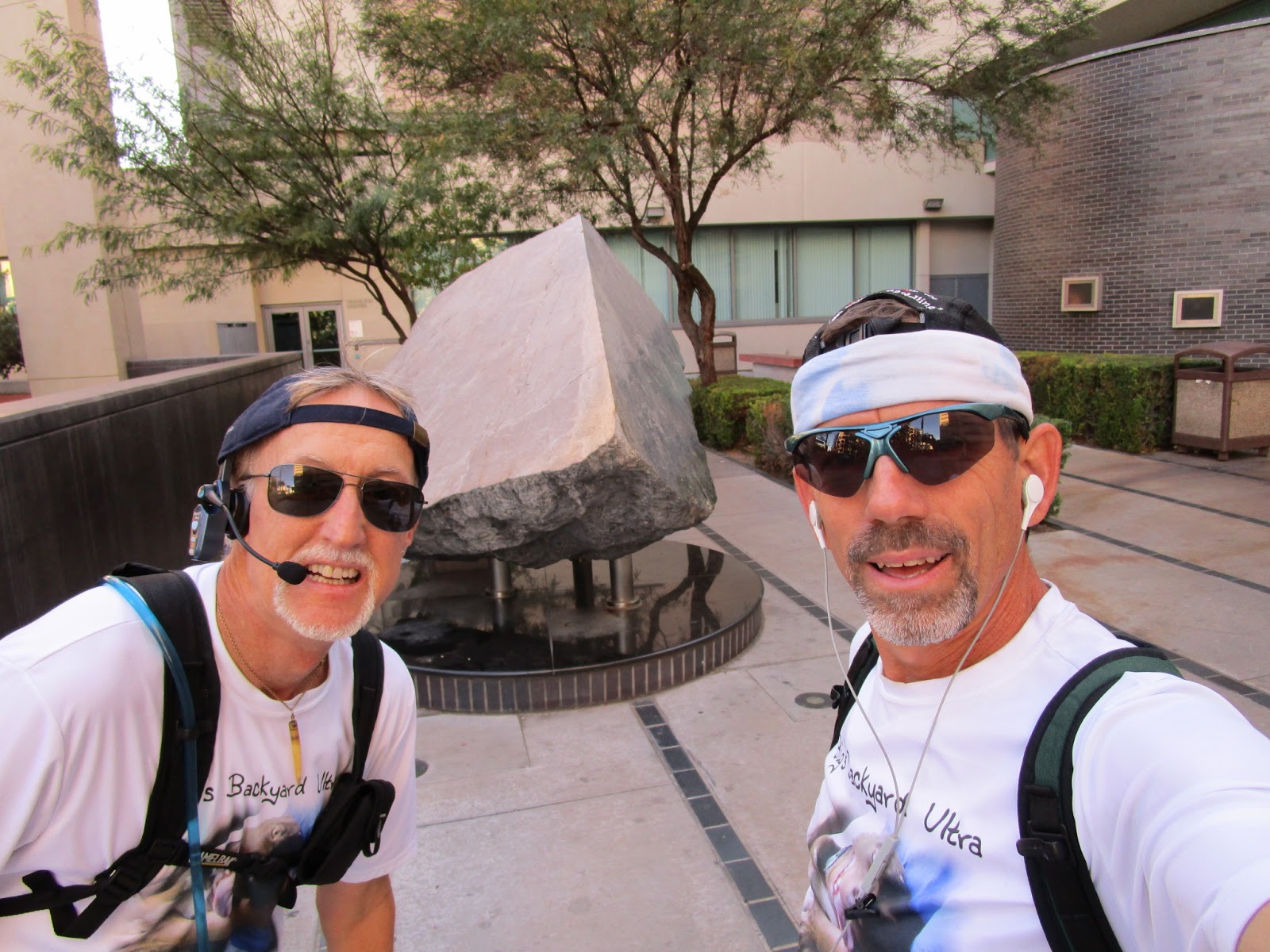 John heard that a "Liberty Bell" was one of the CP's so they ran a couple blocks over to Centennial Park for this photo: 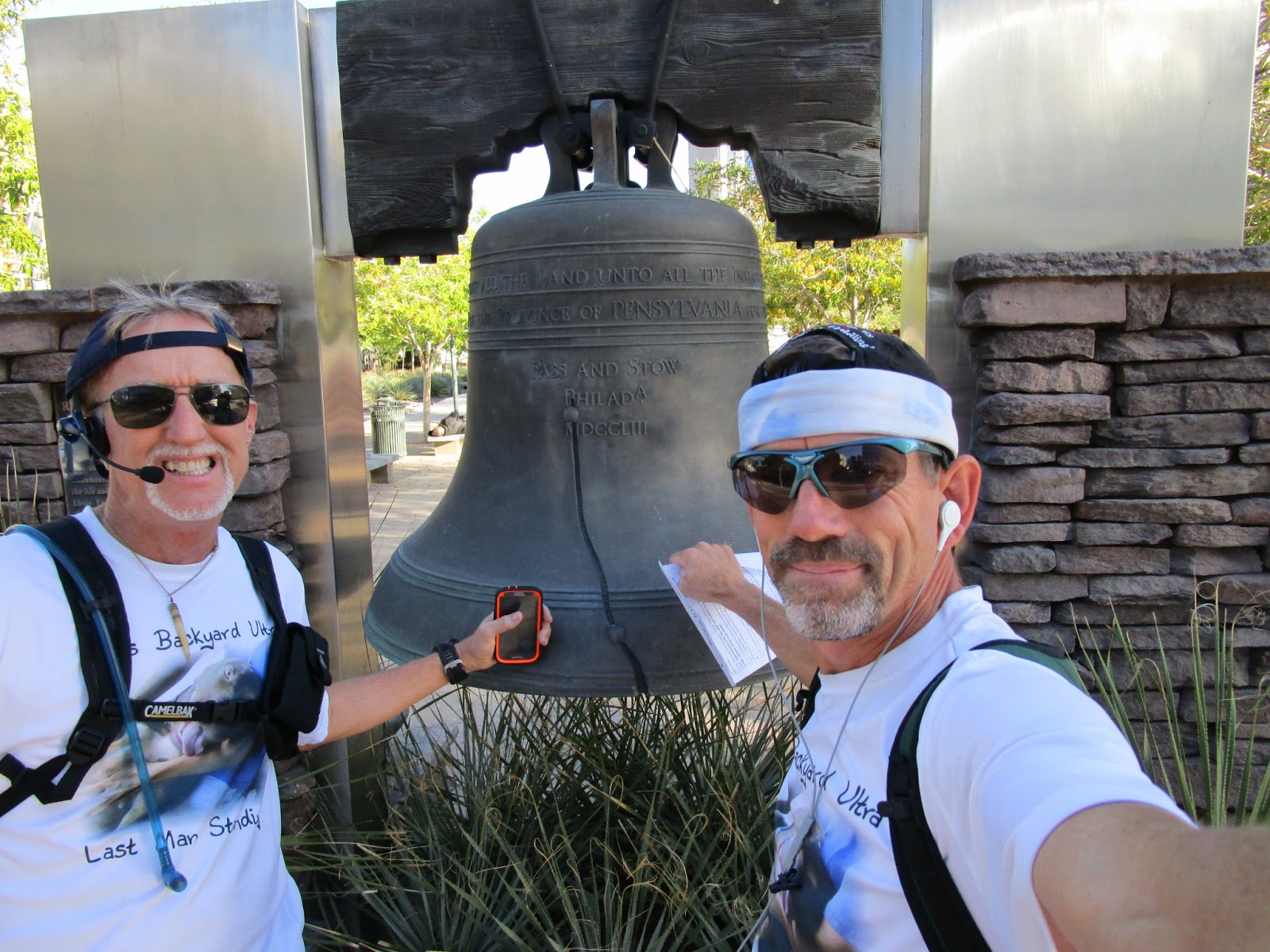 An excellent start!  The team needed 6 out of 7 CP's and they had gotten 2 in the first several minutes.

Then... things got confused.  They thought they needed to go back to The Strip, even though that didn't fit the profile of previous Challenge Nation finals races (too far away for a race that was expected to last maybe an hour).  But two CP's were plotted close to each other, so it sounded "for real" and the guys went to the transit center to hop on a bus.

I managed to capture this regrettable moment before the bus pulled away.  They are working on setting up a padlock they would need for one of the checkpoints (that's not the regrettable part, by the way): 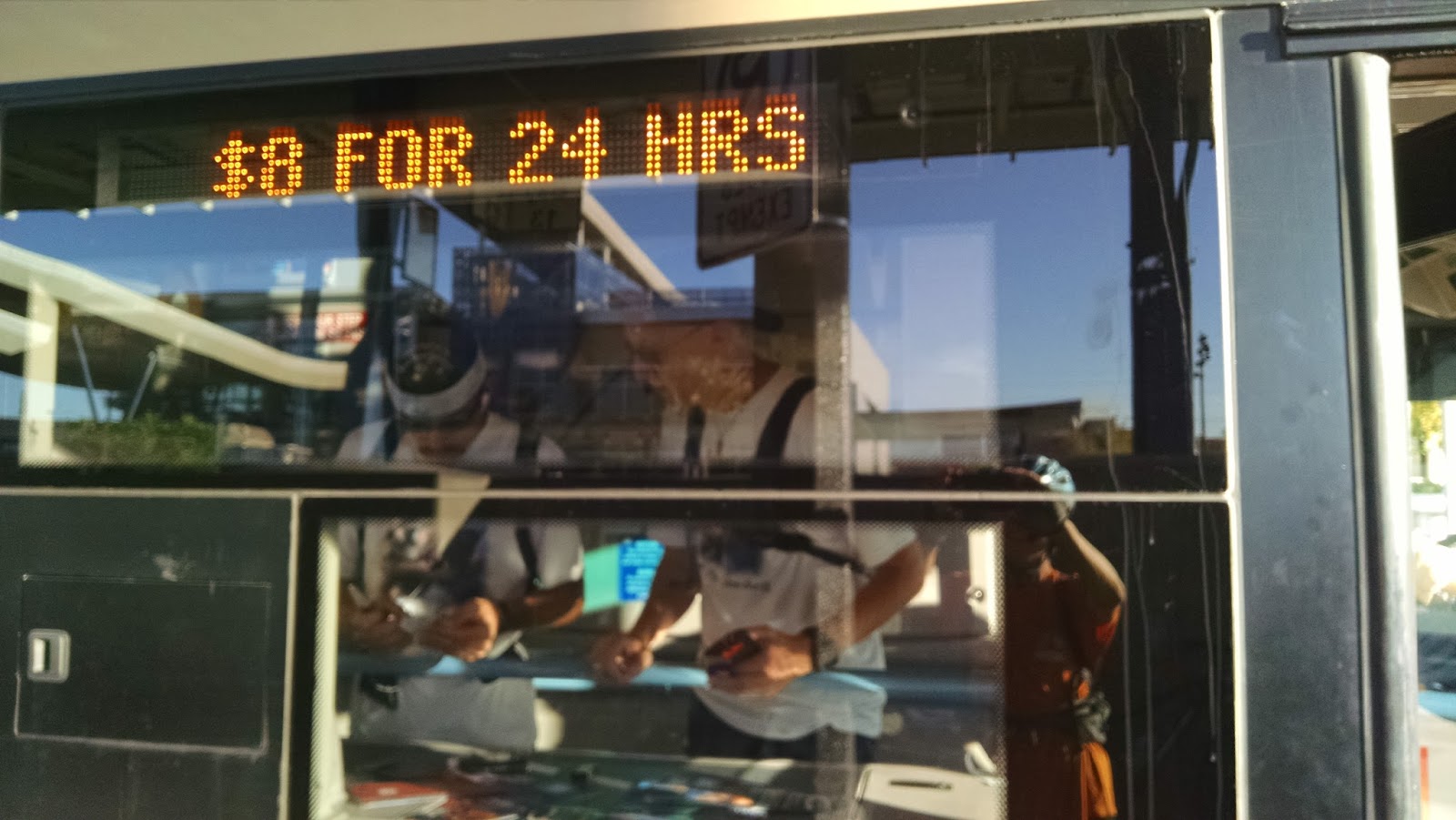 While they were on the bus, I checked the clues and the race map and started questioning why the guys were going south - the team already had a Liberty Bell photo, which was one of the 2 CP's plotted on The Strip.  So they should skip the other one - get off the bus!

After a quick discussion, they got off the bus, having made it as far as Charleston.  Yikes, that's gonna cost some time.

Well, nothing to do but try to get back on track.  They ran over to the Gambler's General Store with these slot machine sculptures outside (hoping they would work as an "antique"): 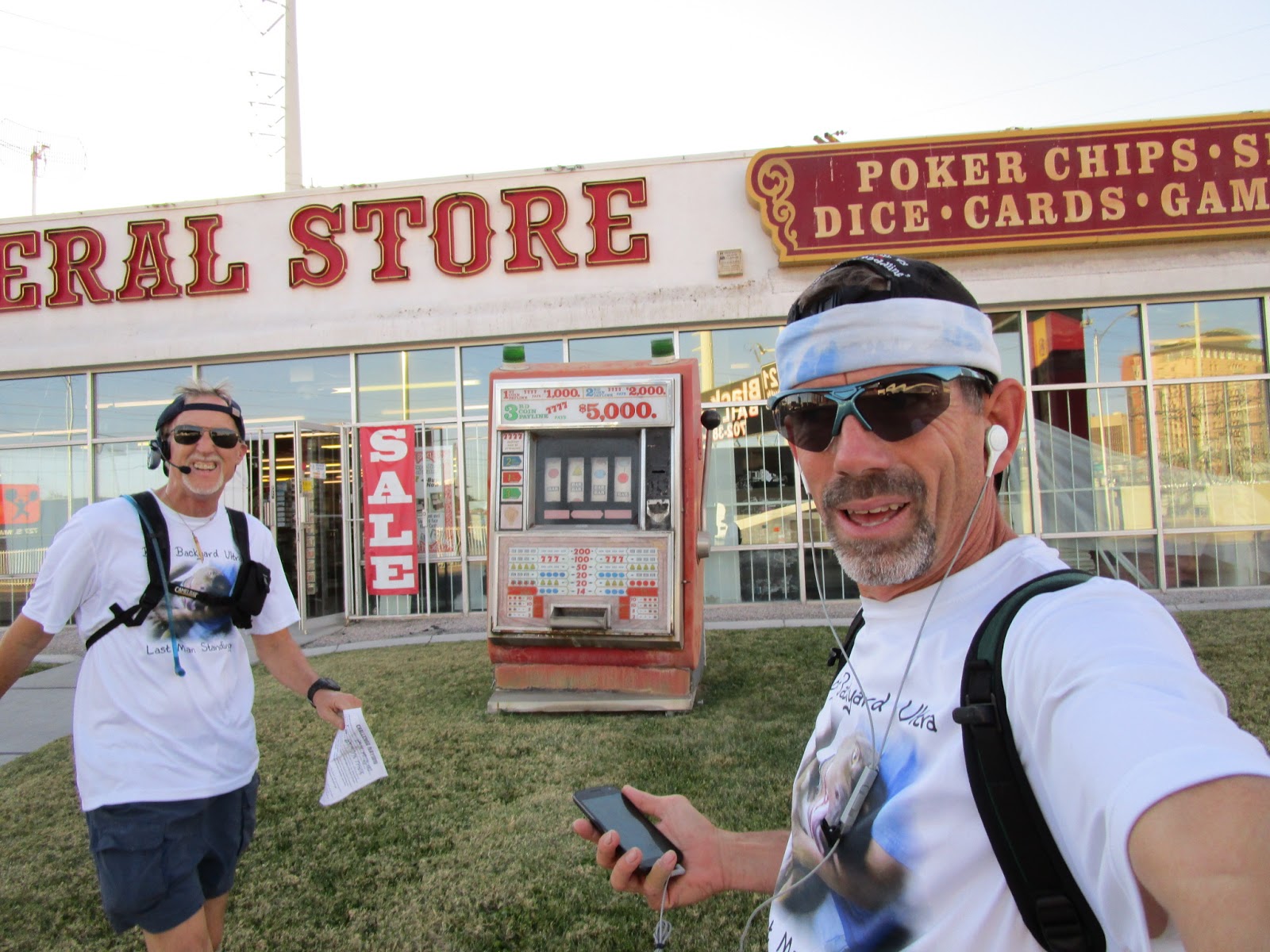 Next they were directed toward the large funky building sculpture by Gehry across the way.  I suggested they might be able to take their photo with it from a distance instead of running over there: 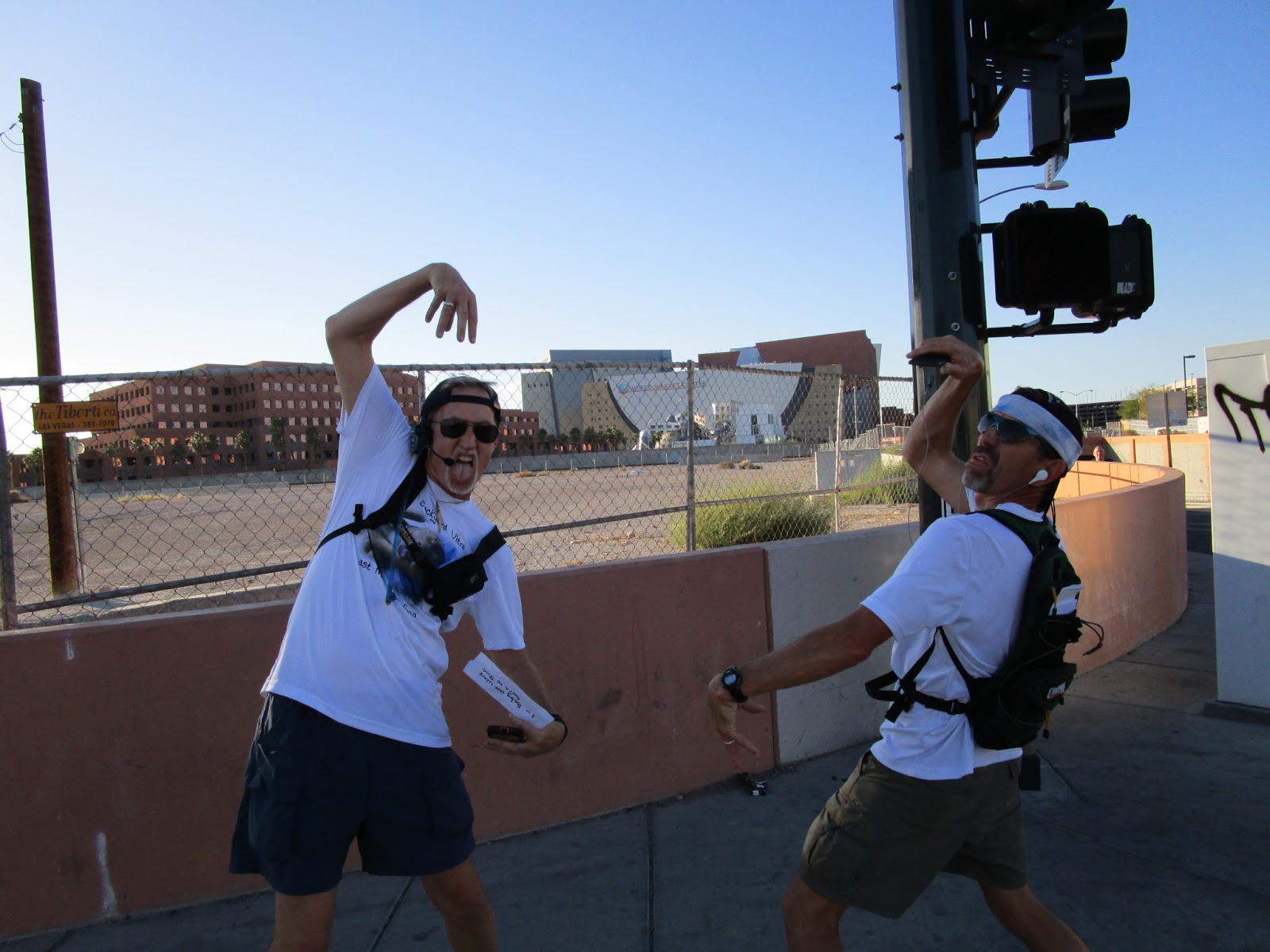 Then to The Plaza for a picture of this mirrored column (part of a Back to the Future movie, cool!): 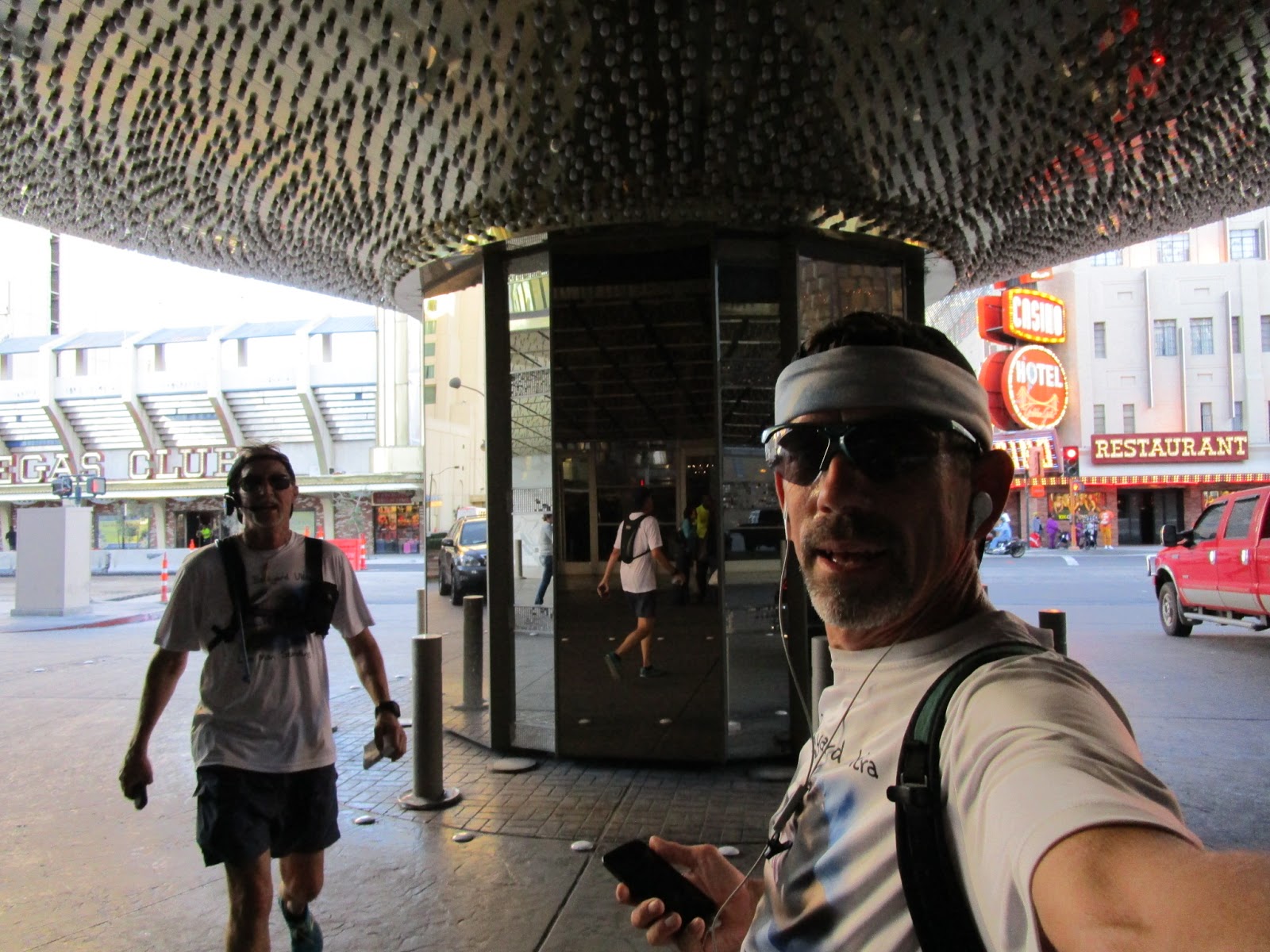 John knew of set of actual antique slot machines at Main Street Station, so since they were running by anyway they ran in to get a (blurry) picture of those: 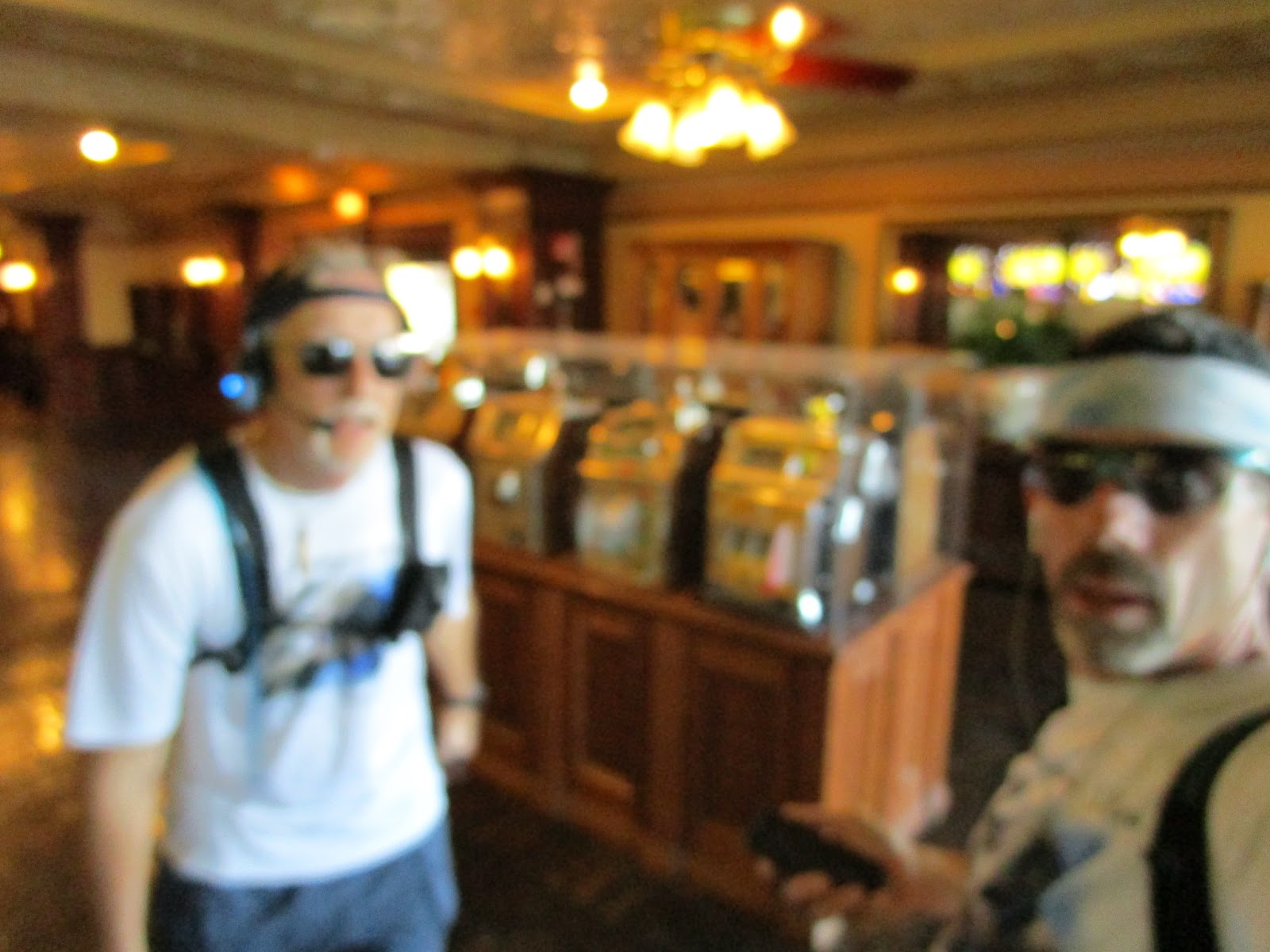 Then up to the library (neat!) for a photo with a specific dictionary, looking up the word "Challenge" - fun one! 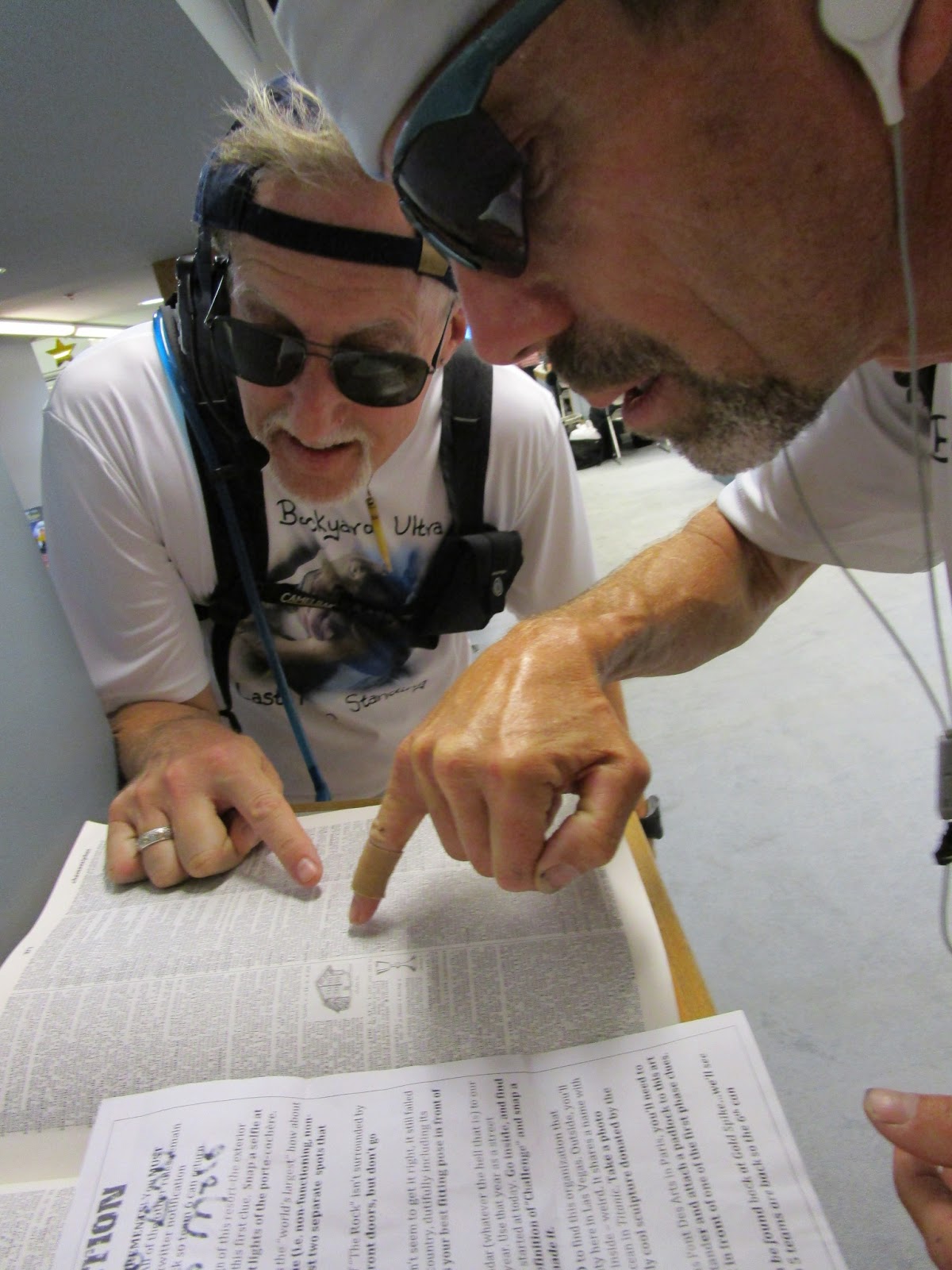 They booked it back to the finish line, knowing they had given up a significant amount of time by getting on and then off that bus.  But they were the first back!  Would it count?

No, it would not!  First the large slot machine sculpture didn't count, but the Main Street Station slot machines did, so they were good on that one.  But the Gehry building wasn't the right answer for that checkpoint.

The guys started back that way when Kip jumped on the line to say that the crew had just found a much closer answer for the second CP originally plotted on The Strip - the heart sculpture at the Container Park with padlocks on it.  Run boys run!

A couple blocks, a quick photo adding the padlock to the sculpture... 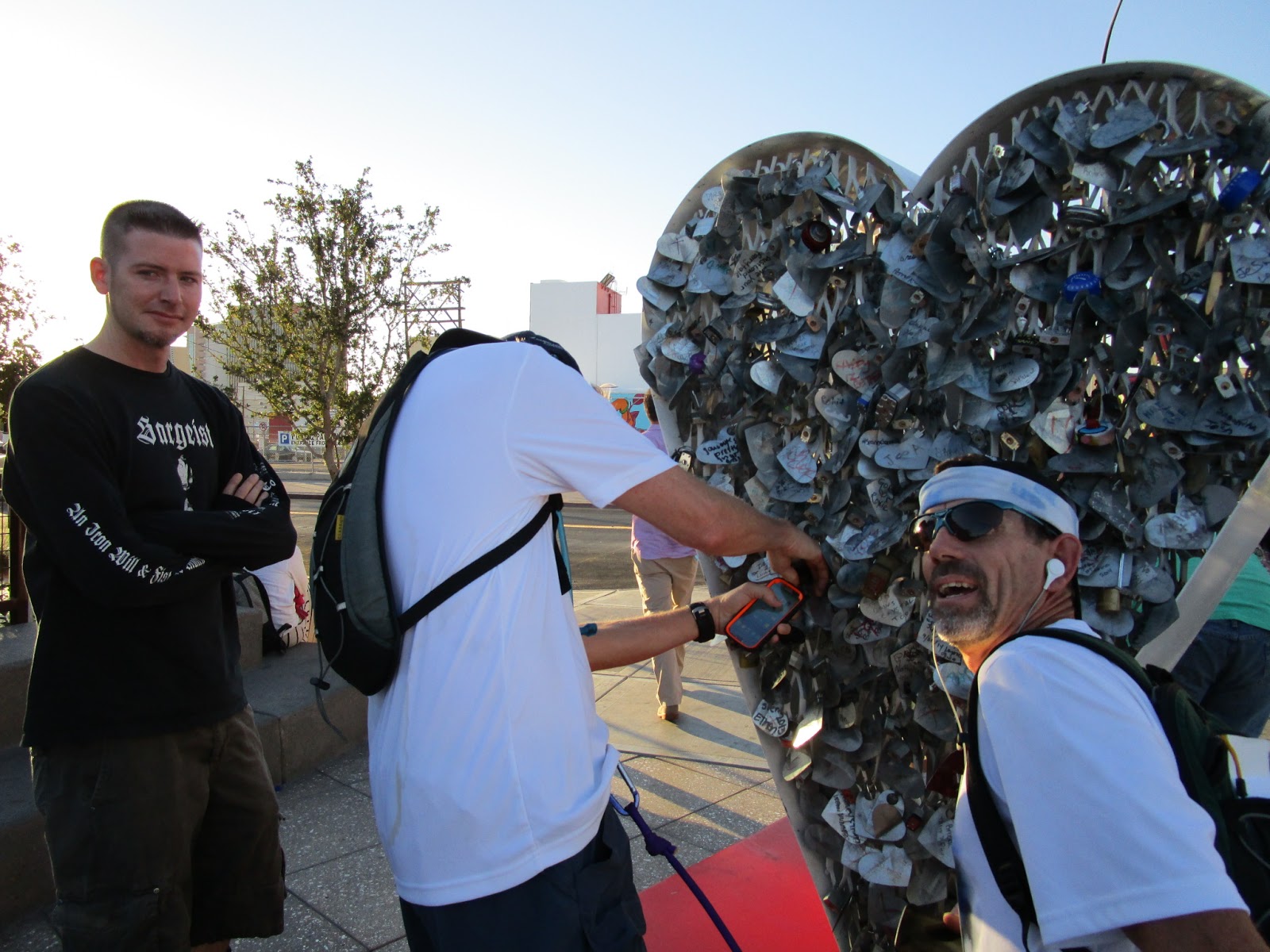 ...and a quick run back to the finish... following team Zack Attack... who ran super fast and had a few seconds' lead anyway.  There was no beating them, and they had all correct photos for first place.  So close!  Our team got 2nd place by about a minute.  Dang, so close.

Later we stopped by the Gehry building courtyard to figure out the actual answer to that checkpoint - a sculpture that was donated by Mr. Gehry.  Not something they could have photographed from a distance: 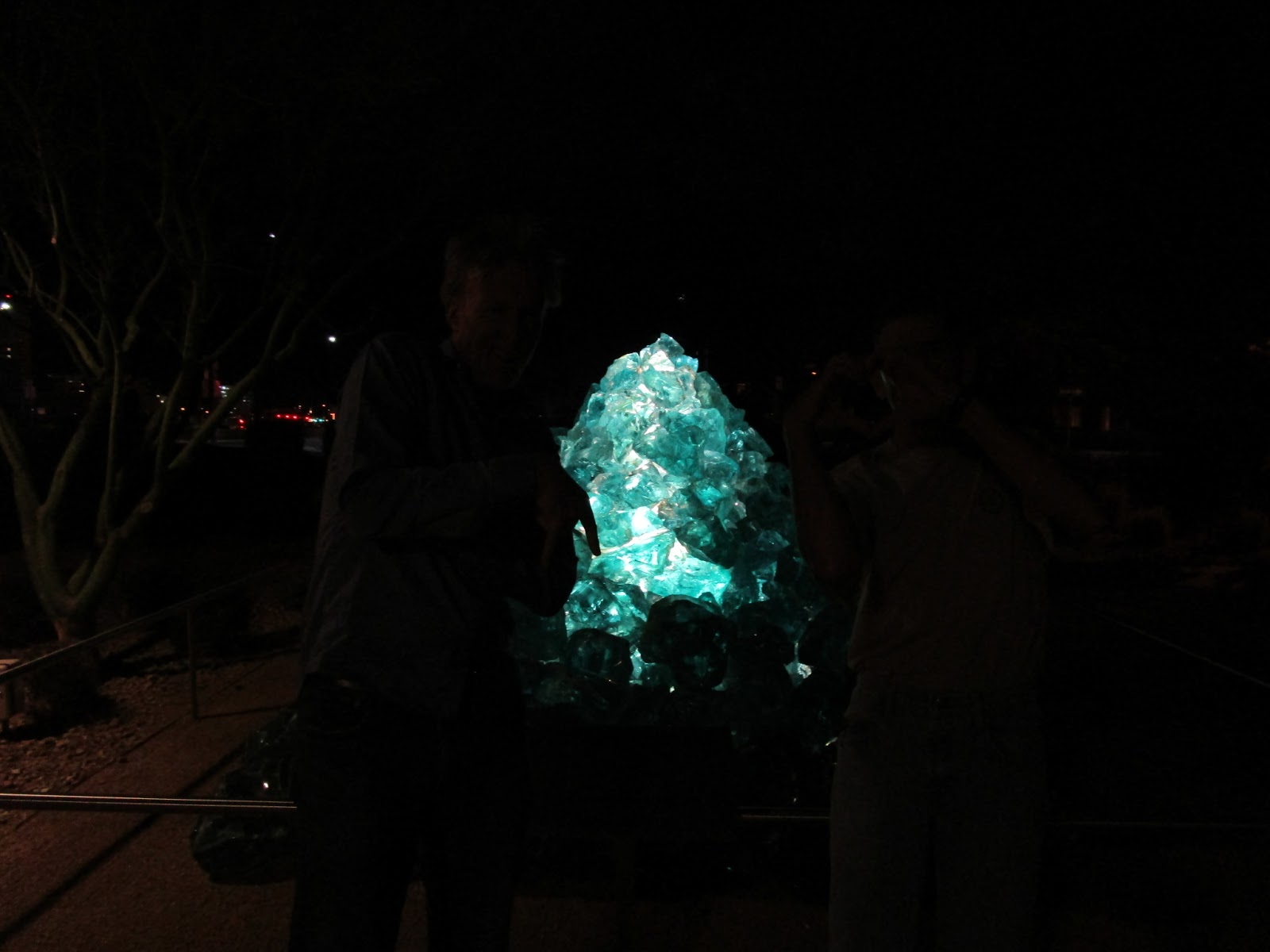 It was a super fun weekend and we enjoyed the racing and the challenge and Spencer's company - thank you Spencer! 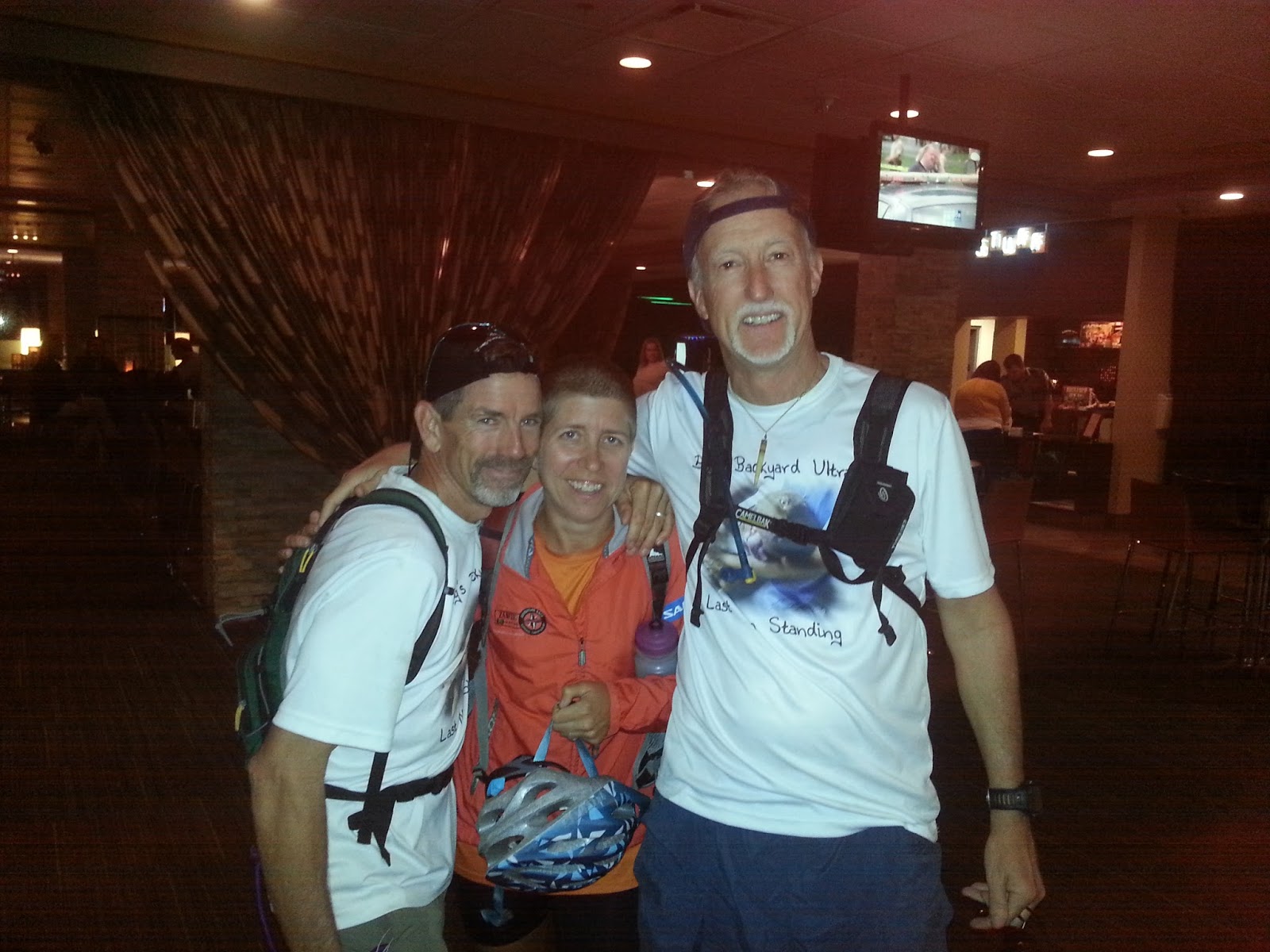 Looks like an awesome time, must be very hard to do this in Vegas. -RR