Mom has been wanting to see the tides of the Bay of Fundy, and since we think that is a pretty cool idea and we like traveling with Mom, we took a bus up from Boston to Vermont.  From there we started a journey to Canada with 3 people and a dog in a car with as little luggage as we thought we could get away with and still be warm.  Spring is coming north, but slowly.

Our first couple days of adventure were in New Brunswick.  We crossed the border from Maine and hopped on a free ferry over to Deer Island.  The Old Sow, a large whirlpool, was possibly going to be "running" that morning, a couple hours before high tide. 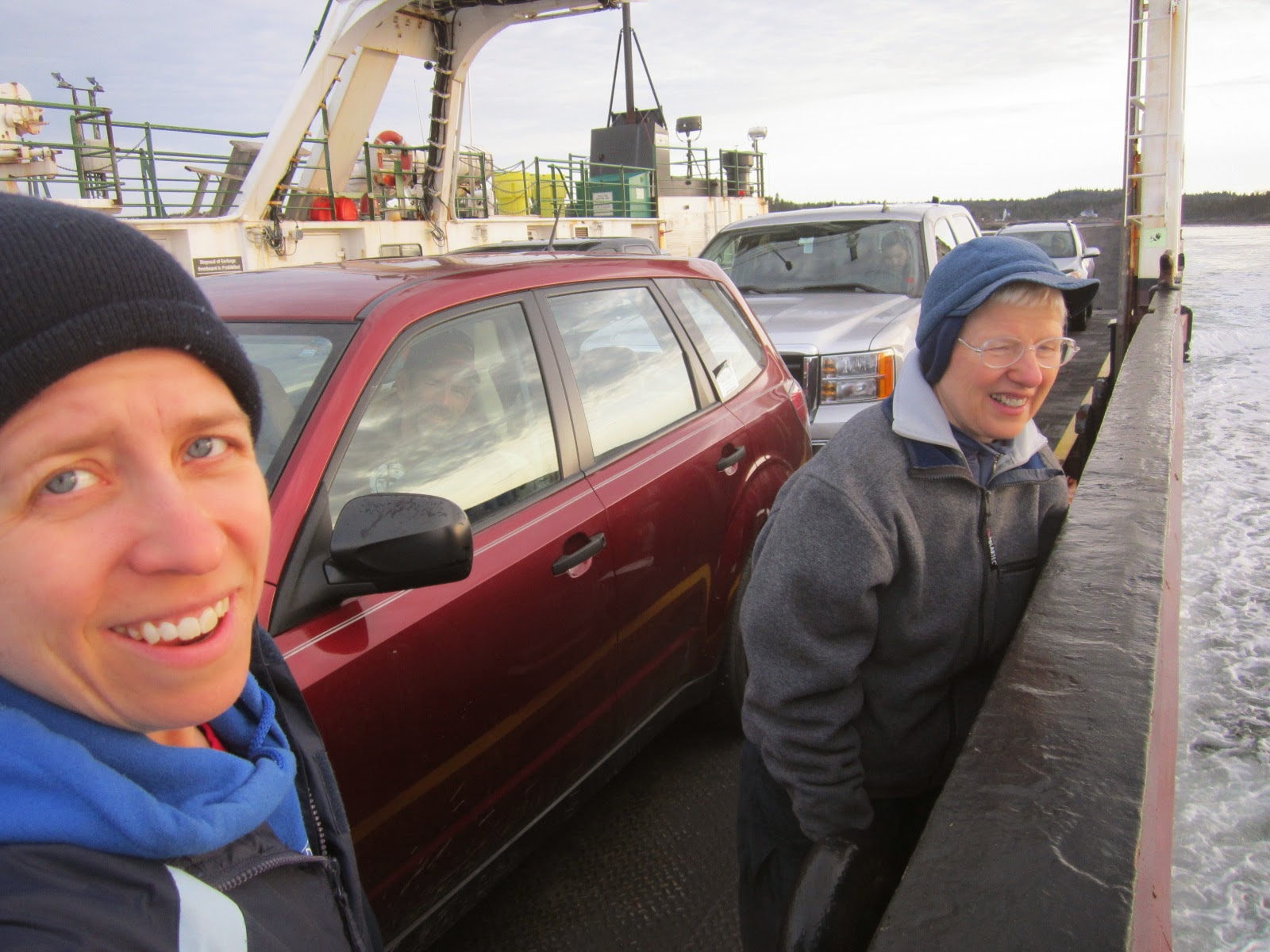 We're not sure we saw the Old Sow in full form, but we did see a lot of "disturbed water" around the southern point of the island. 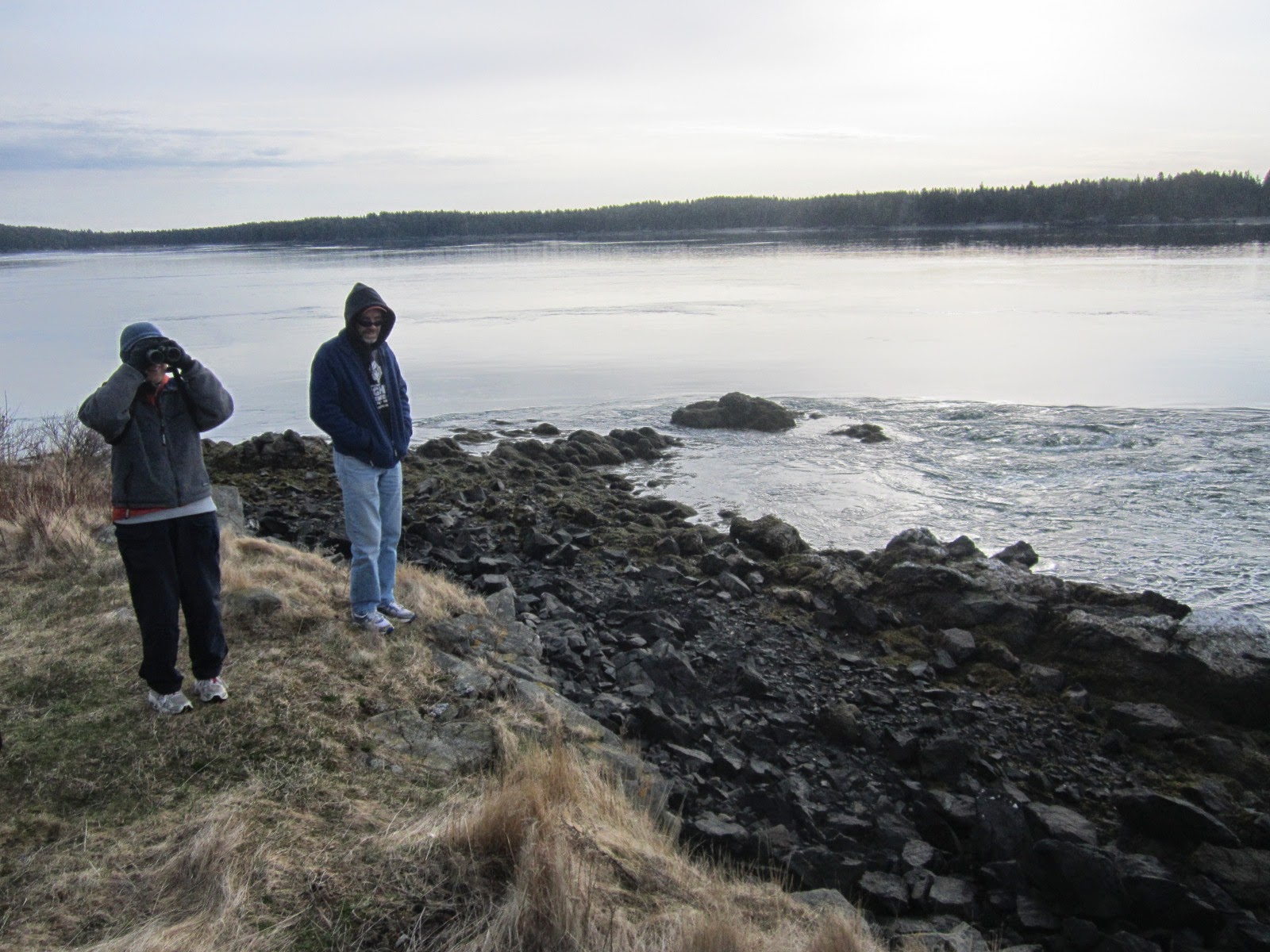 Rip-type waves would just appear and slide along, not so easy to document with a camera though. 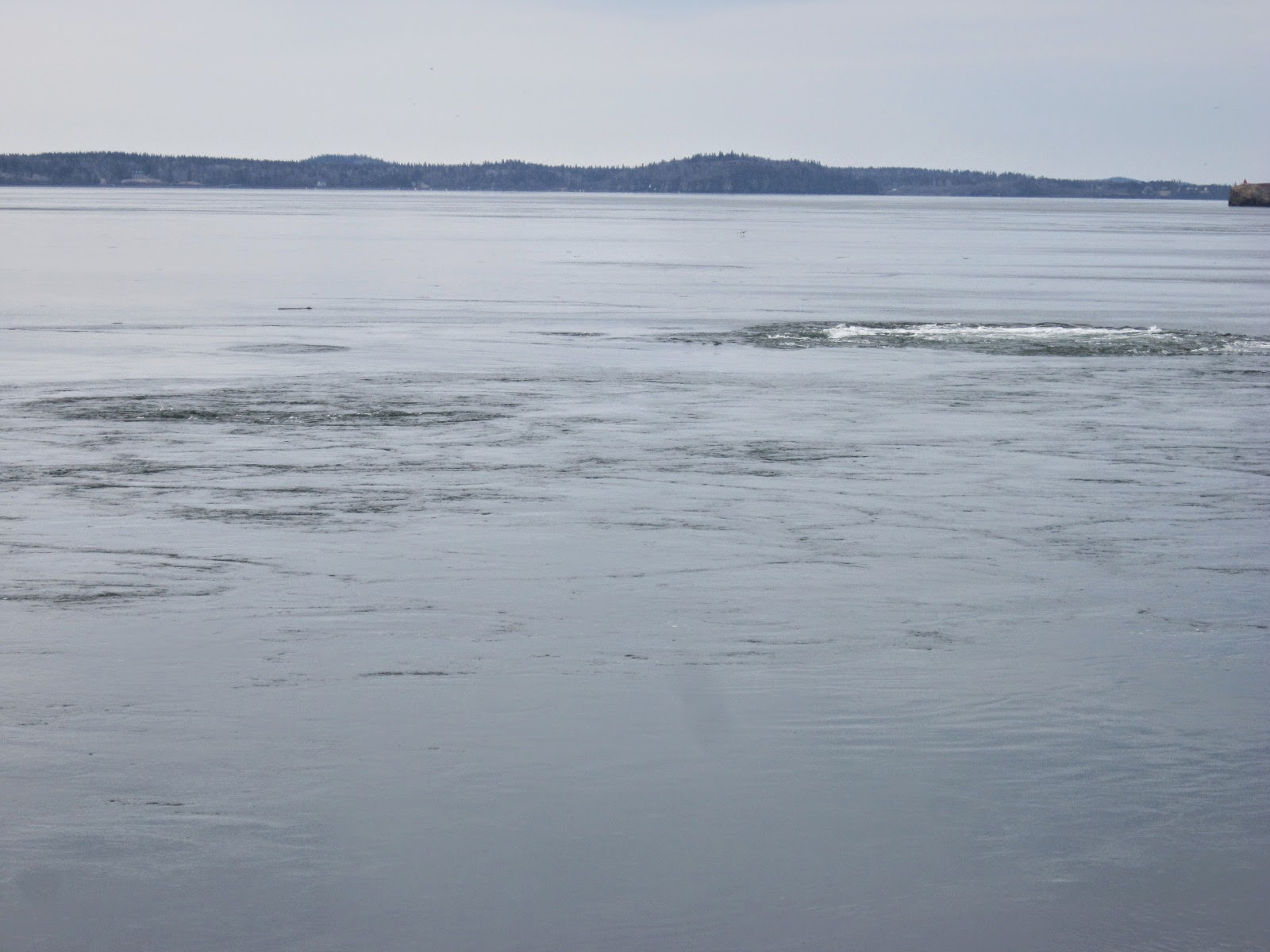 We saw a large raft of birds sitting on the water, slowly spinning in a huge circle.  That may be where the Old Sow appears, although it didn't seem to be a whirlpool that morning.  The highlight was spotting 3 bald eagles, yay!

We had our first experience with a tide coming rapidly in.  The rock on the left was connected to land when we arrived (we had all climbed up on it to watch the water), but here's how it looked not long later: 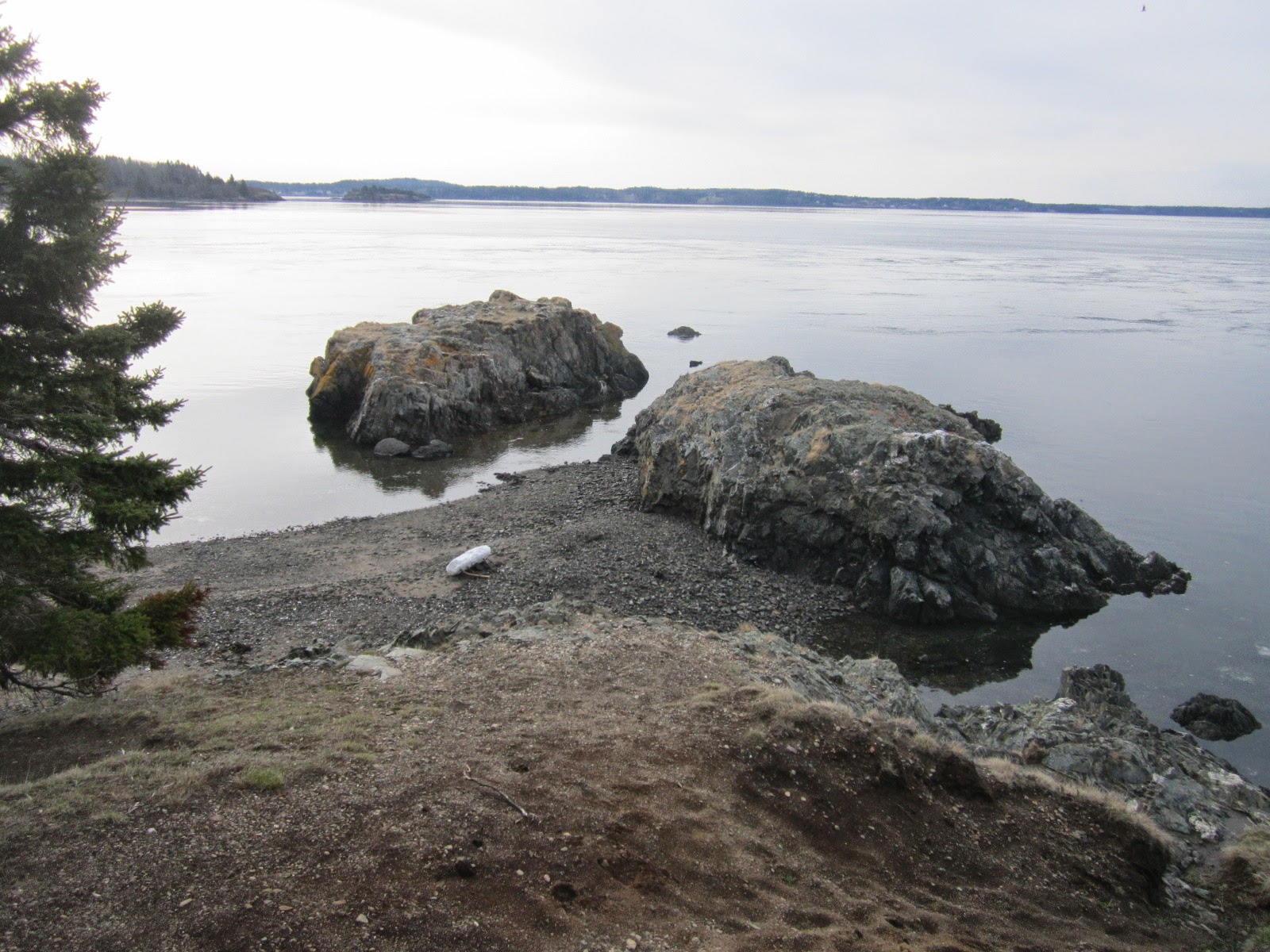 From there we drove up to St John for a run around a park and a quick look at the location where there are sometimes "reversing falls" (the water from the ocean tide comes upriver and creates a waterfall in the opposite direction).  Apparently there is too much spring snowmelt for that to happen in April, but the bridge has a nice view of the city and the river was roiling: 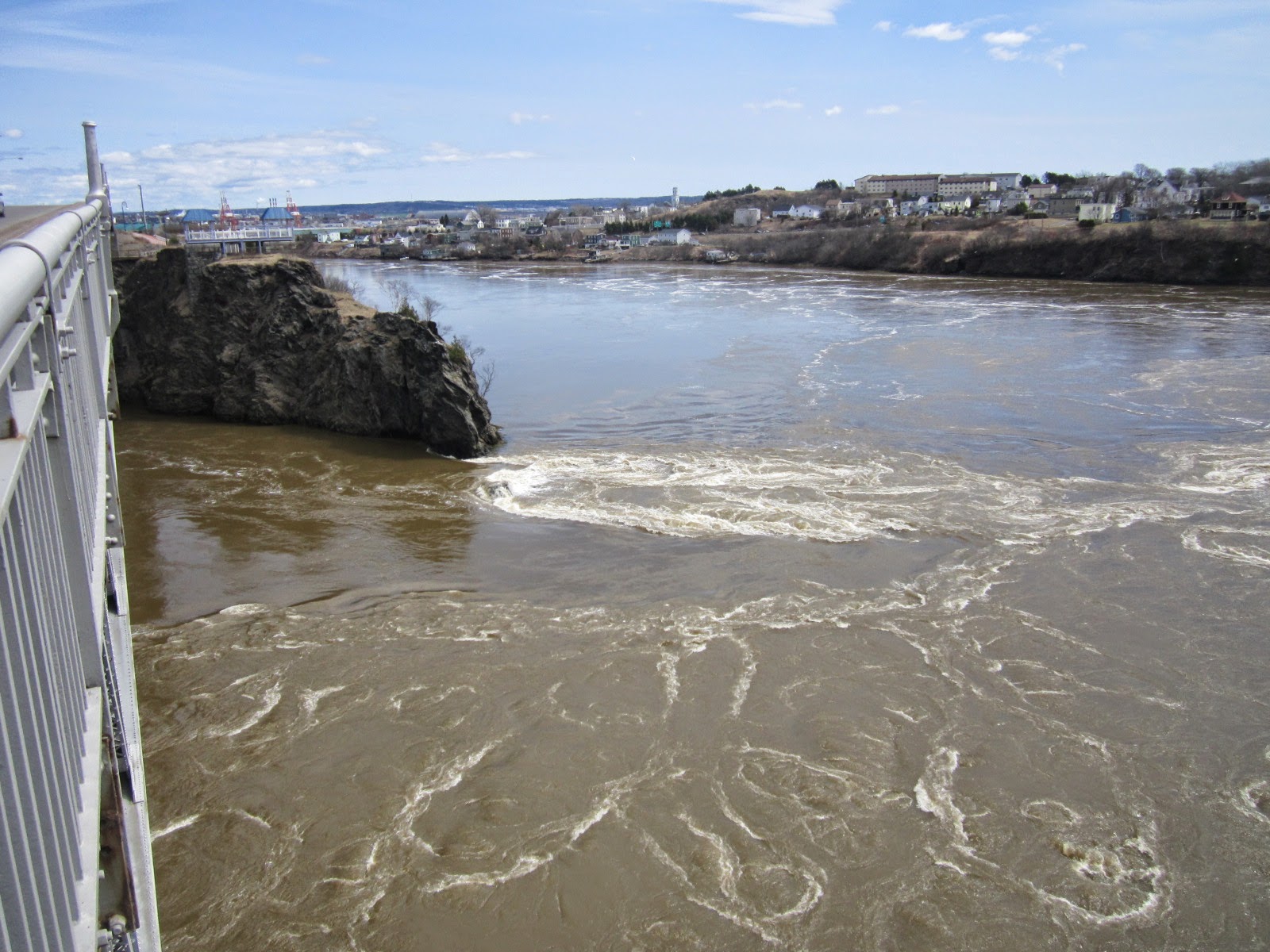 An old tower on a St John hill: 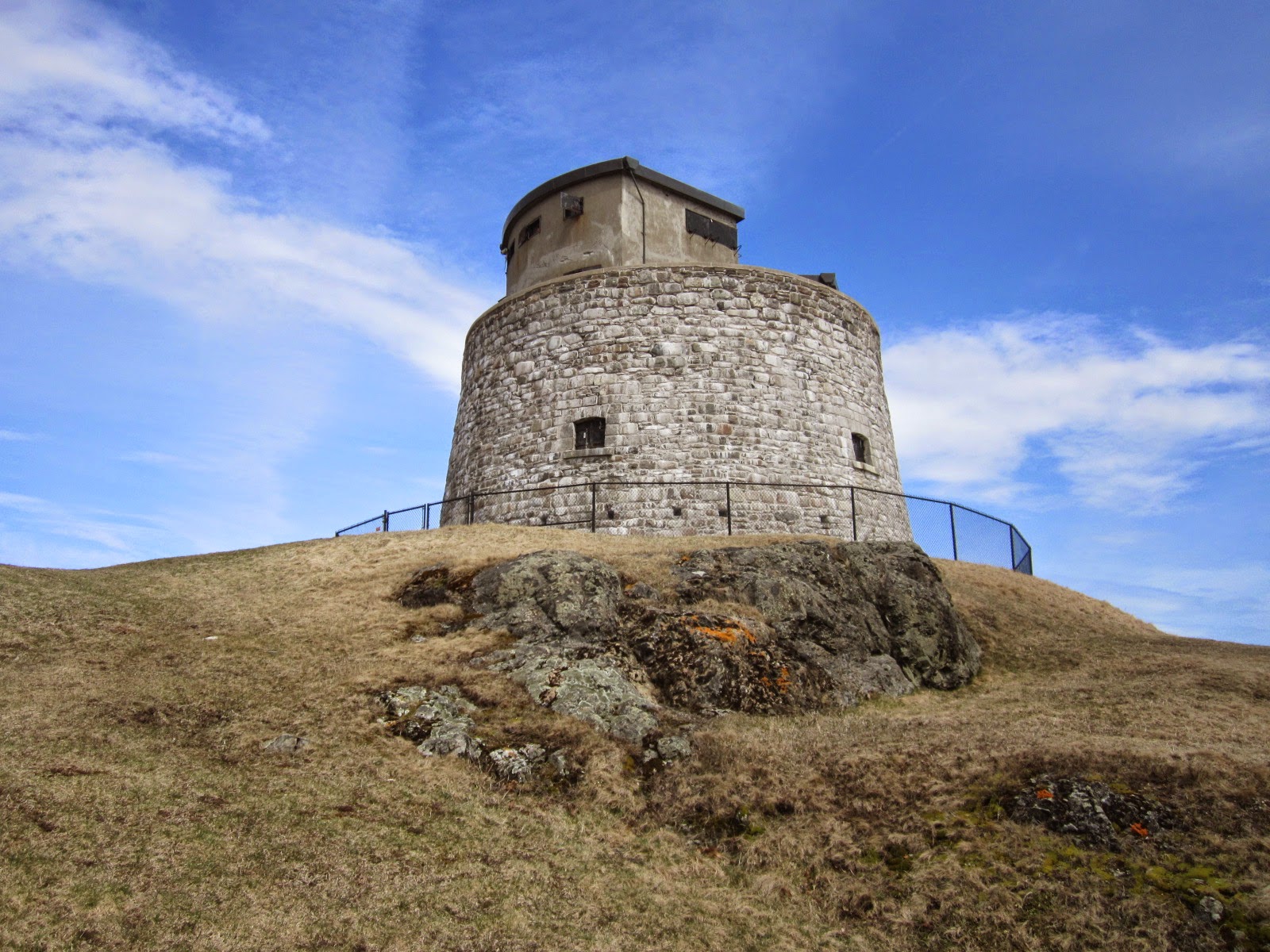 The next day we toured the New Brunswick coastline to the north.  Fundy National Park still had a bunch of snow in the upper area, and this lake was mostly covered with ice.  Hmm, just a little early in the season... 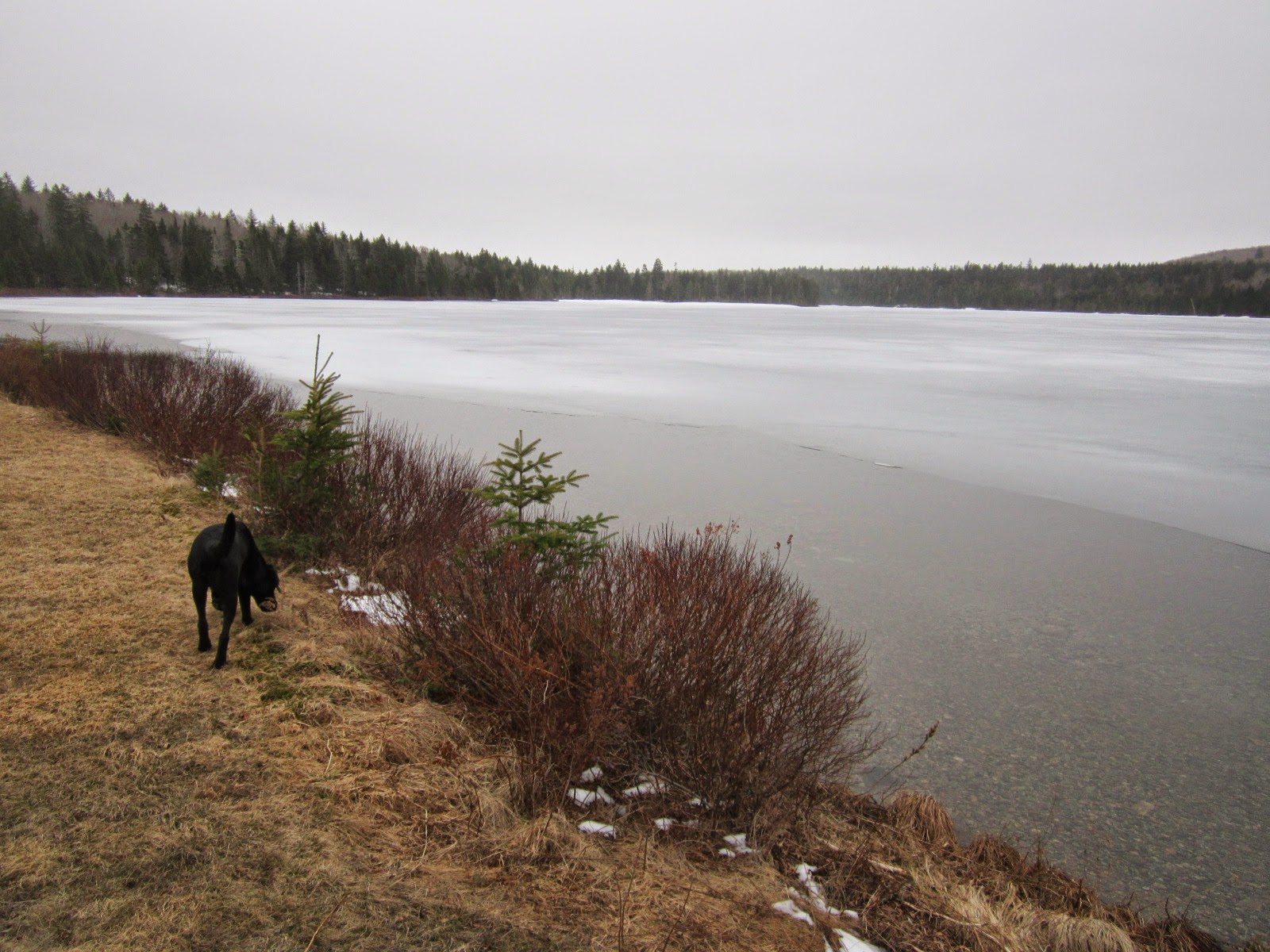 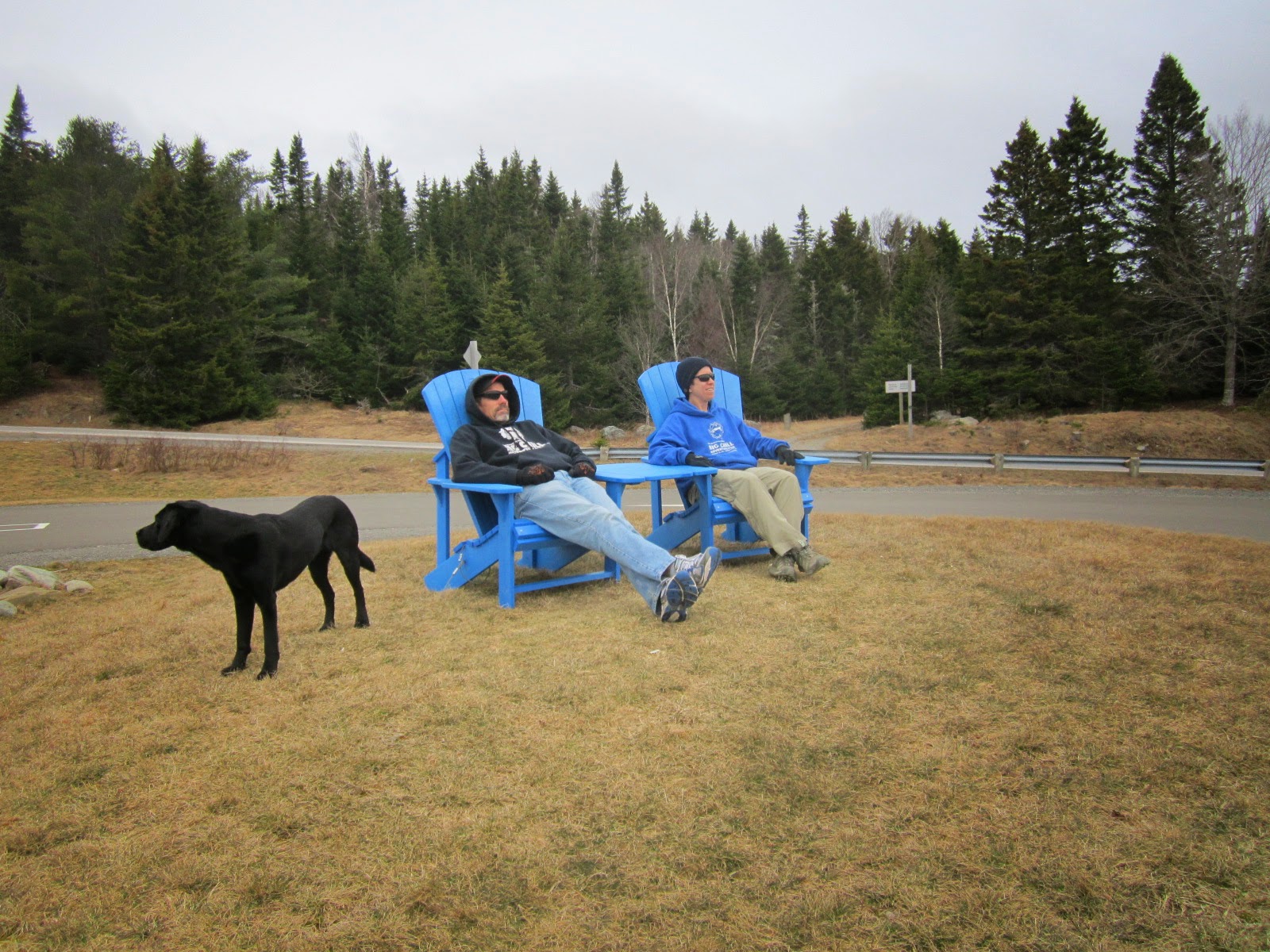 The Coastal Trail was open, so we got some good "forest time".  Only a little snow still left on parts of the trail, but easily passable. 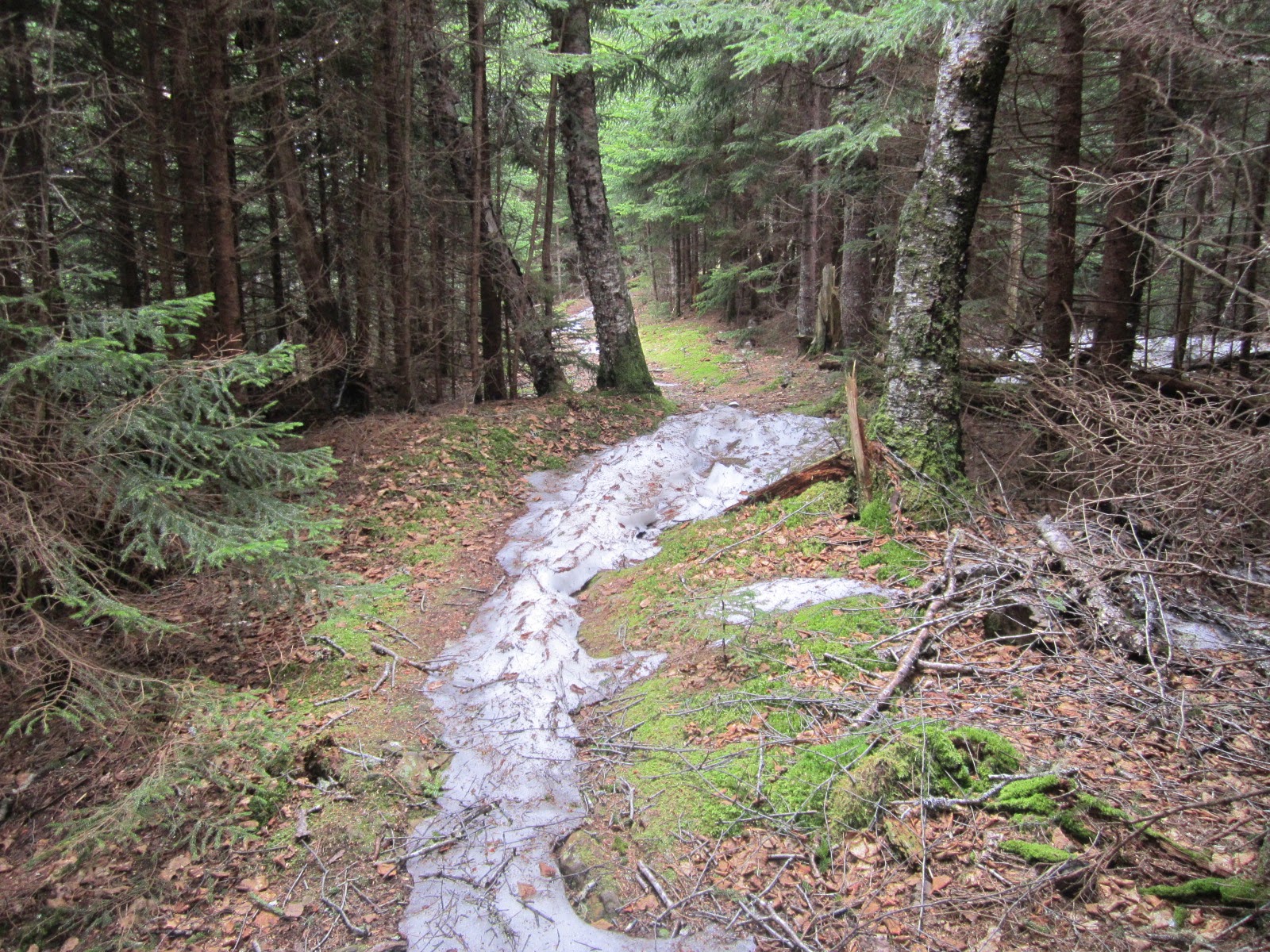 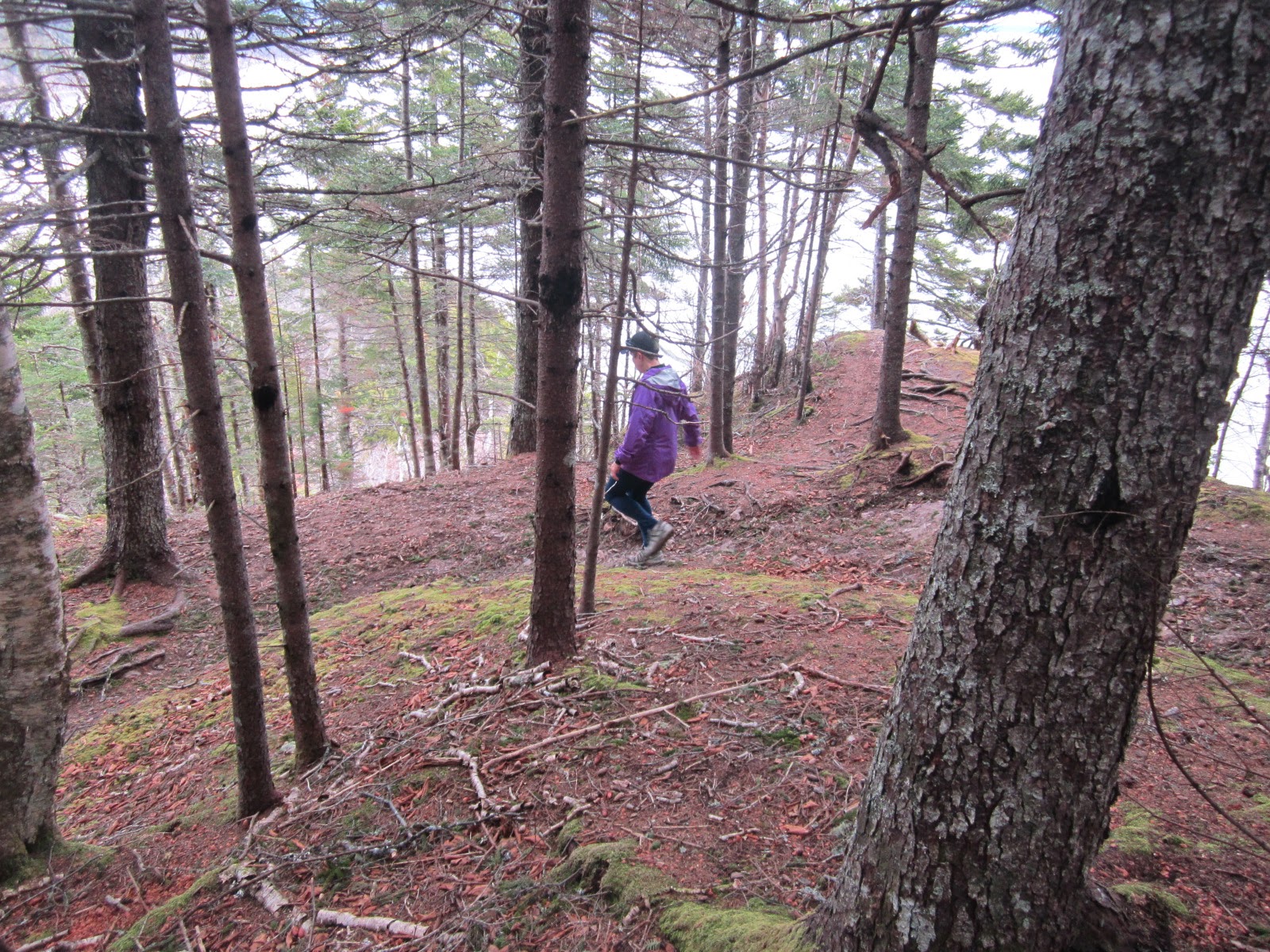 Our next stop was at a beach which I think is called Mary's Point.  We were there not long after high tide, so it was time for some ebbing action. 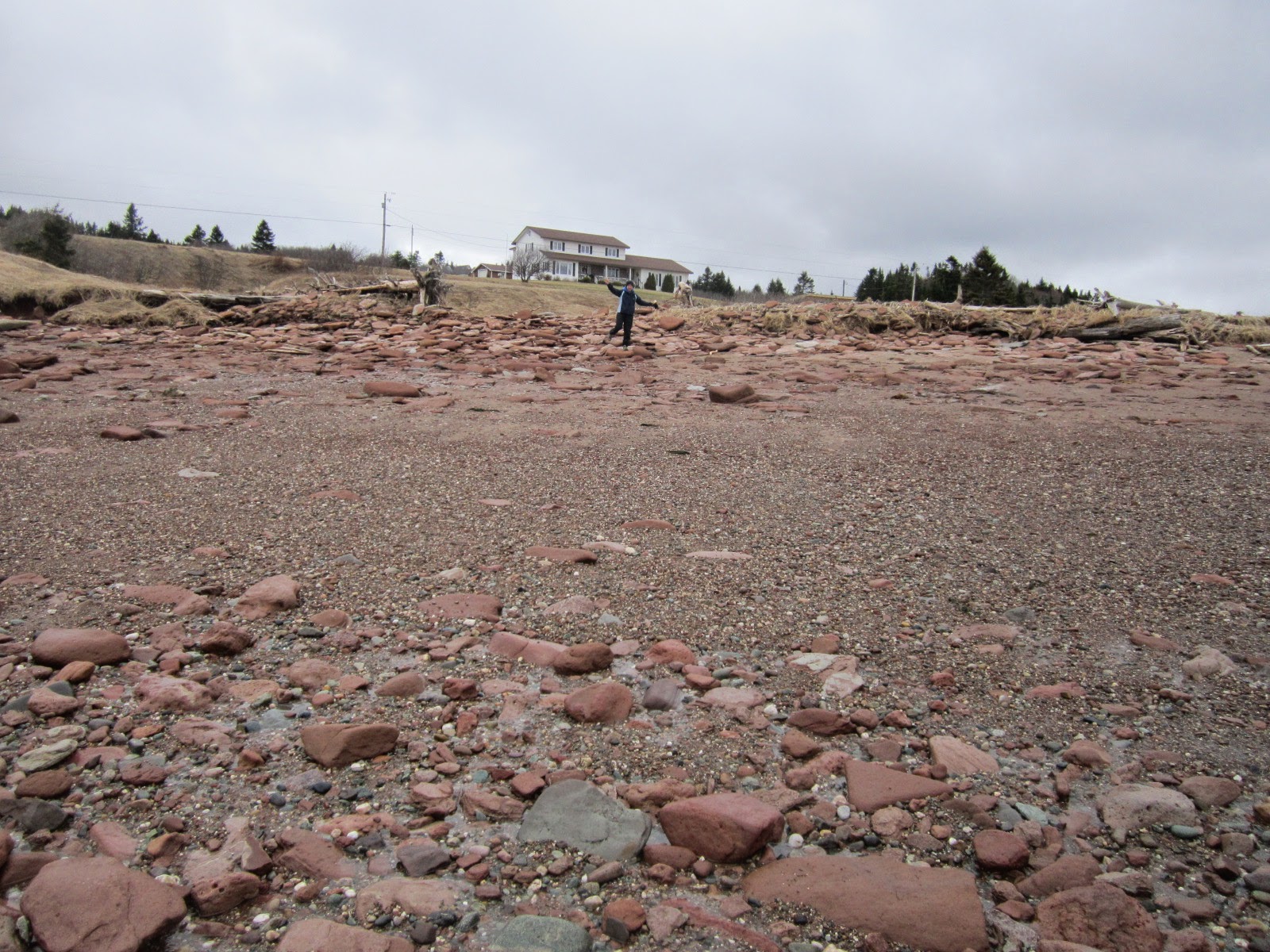 The land seems to be taking a bit of beating with all the water coming in and out: 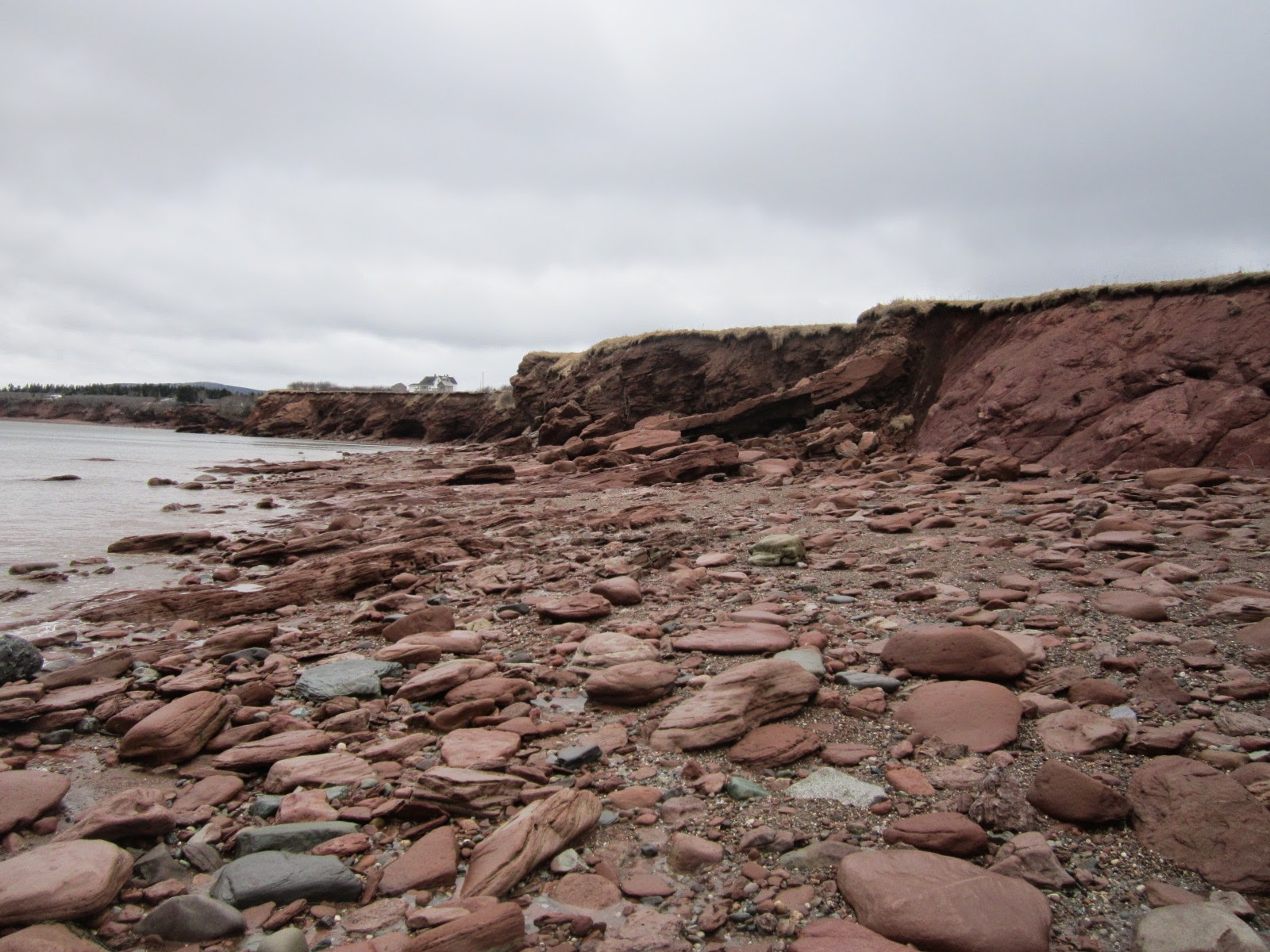 John jumped out to this rock and started his watch: 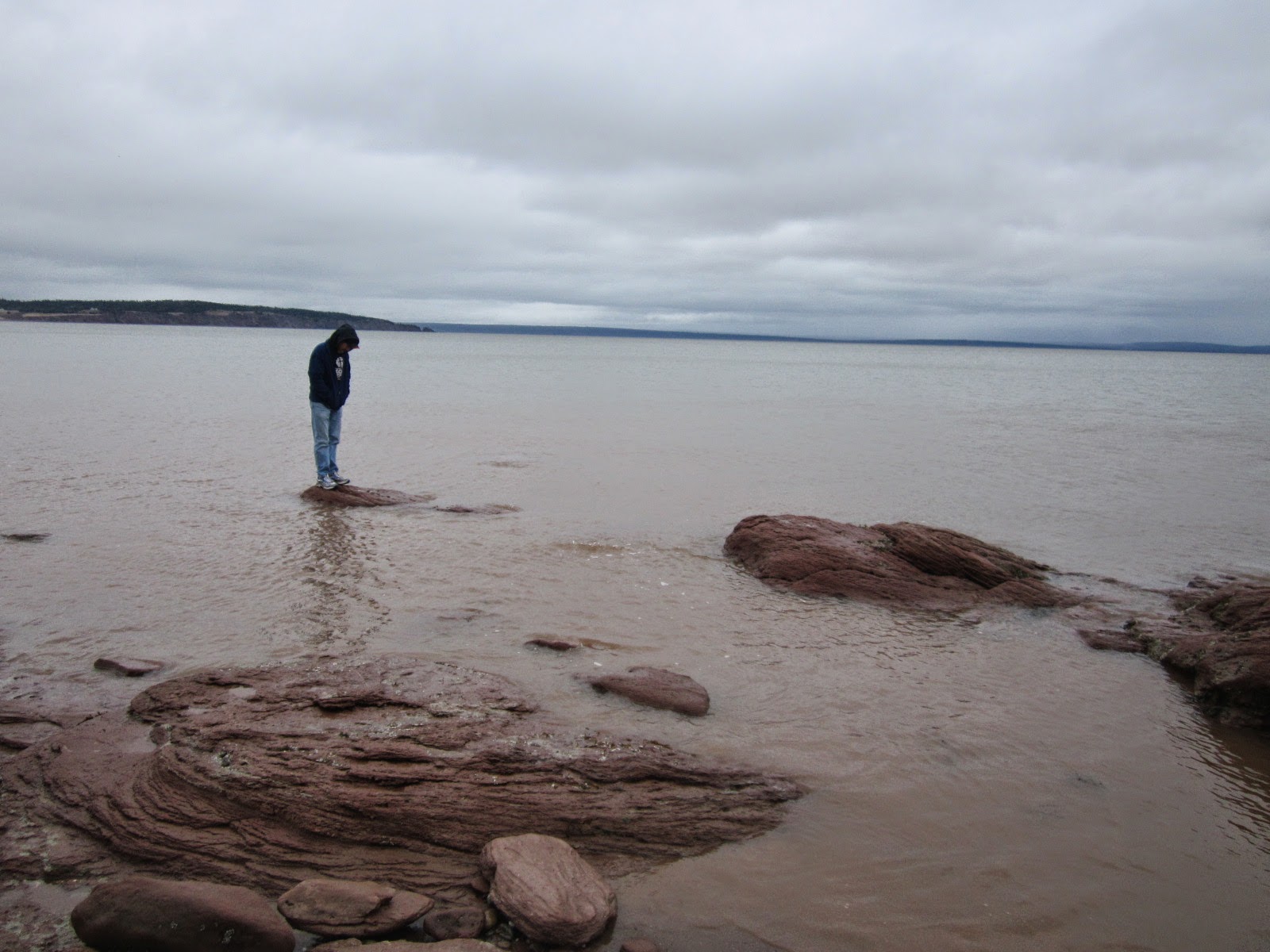 Renee was curious about this experiment: 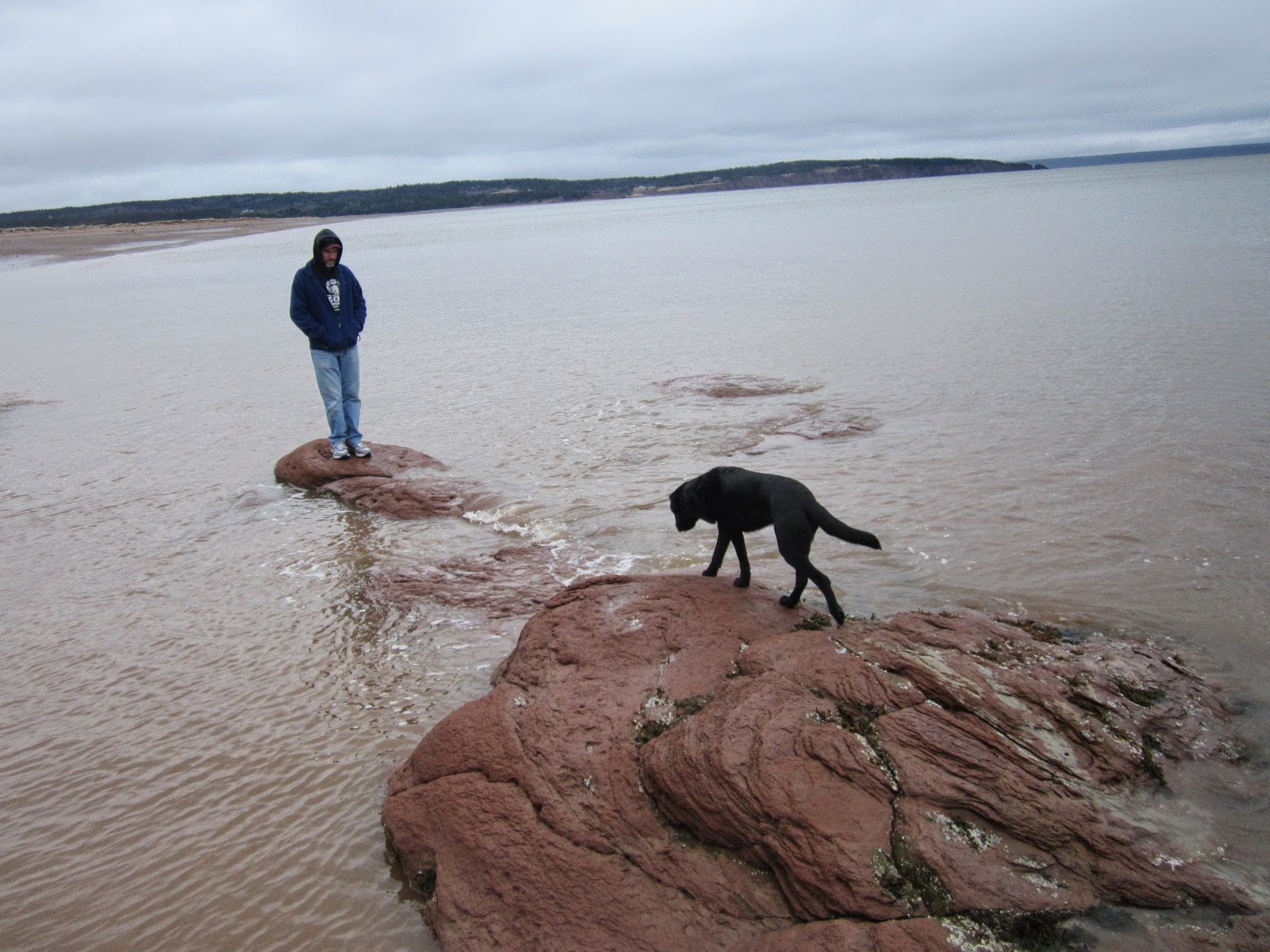 Renee "helping" John with some push-ups: 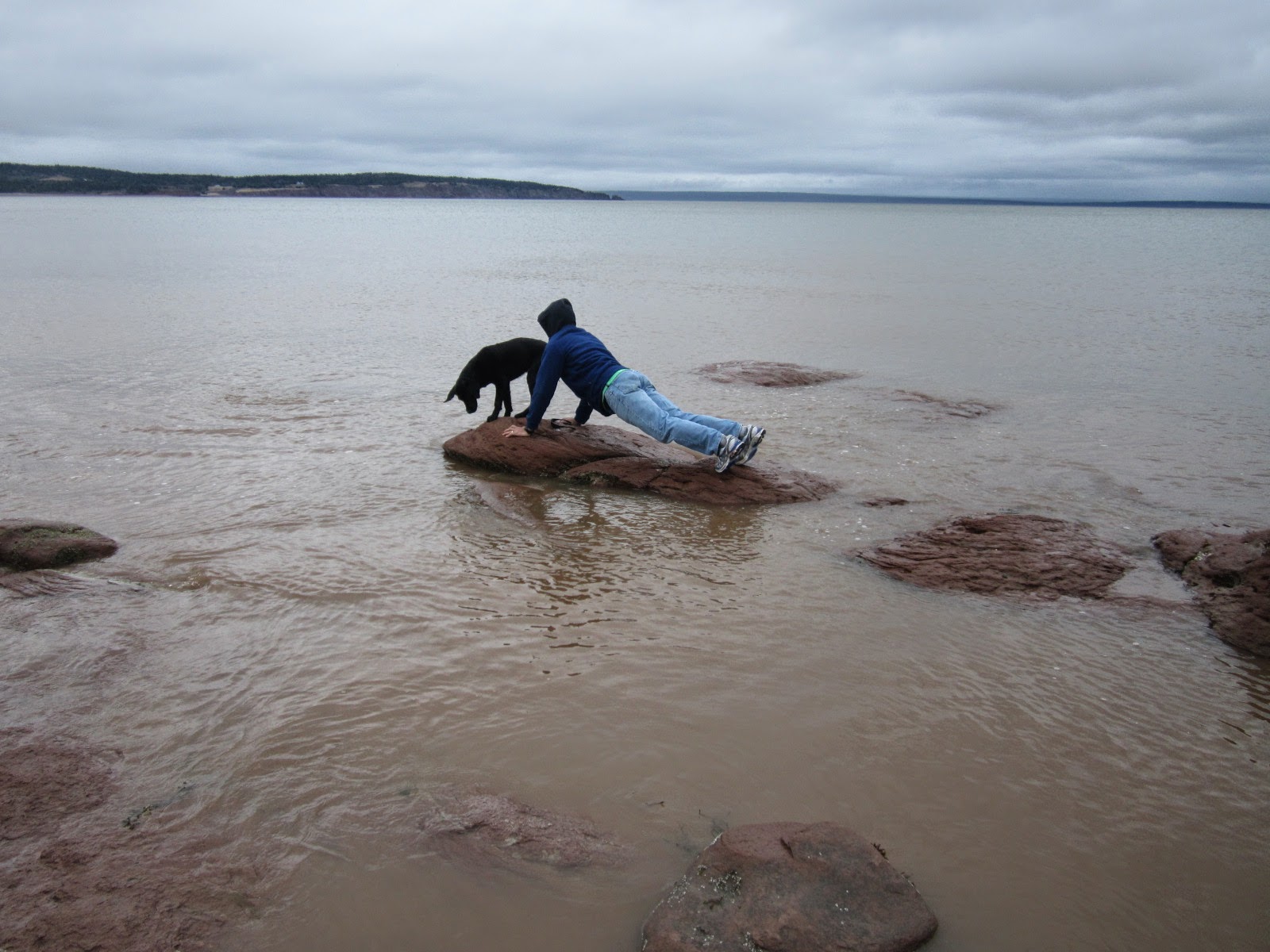 8 minutes after starting the timer: 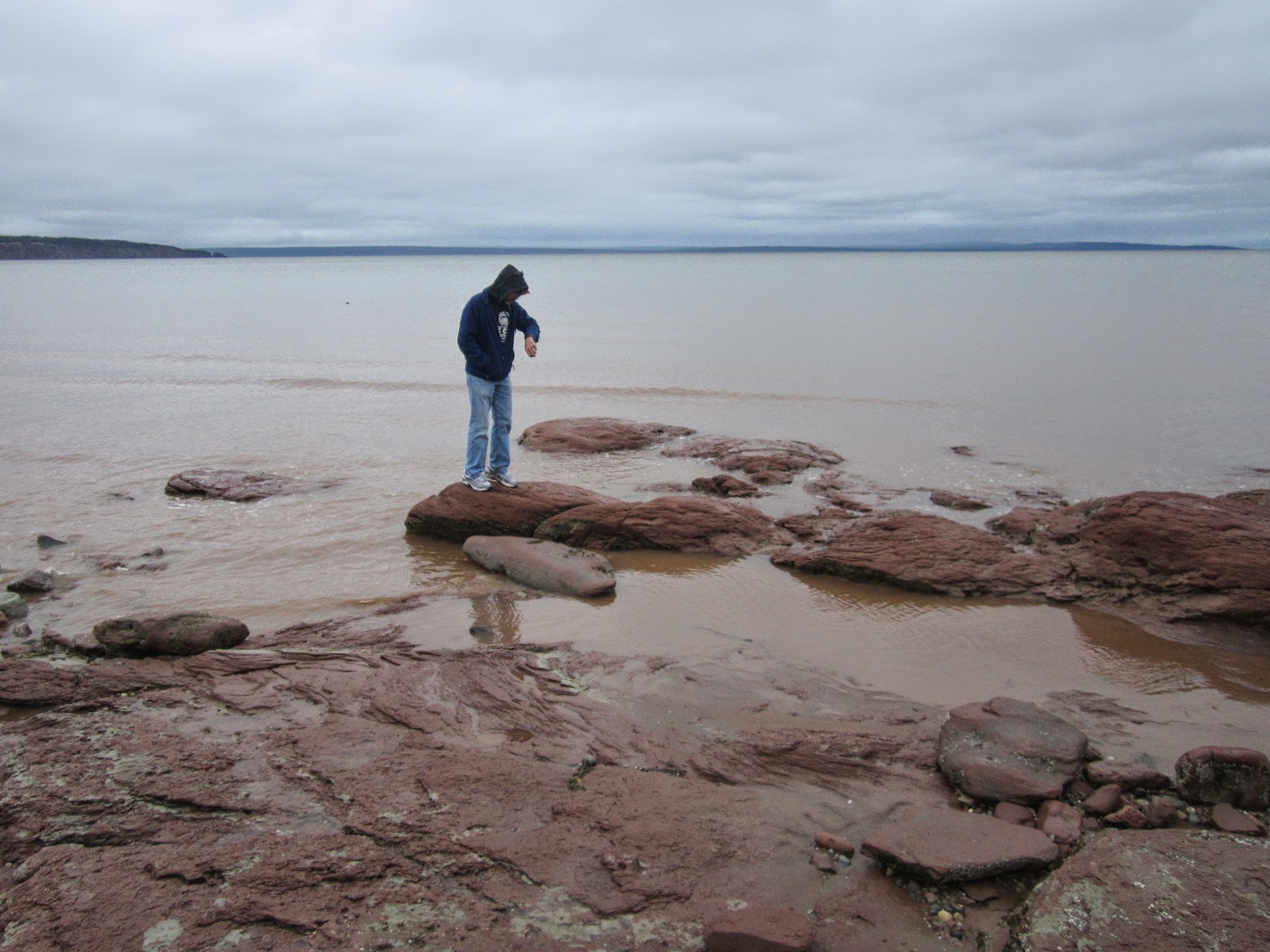 Renee loved running around on the newly-uncovered sand as the water quickly receded: 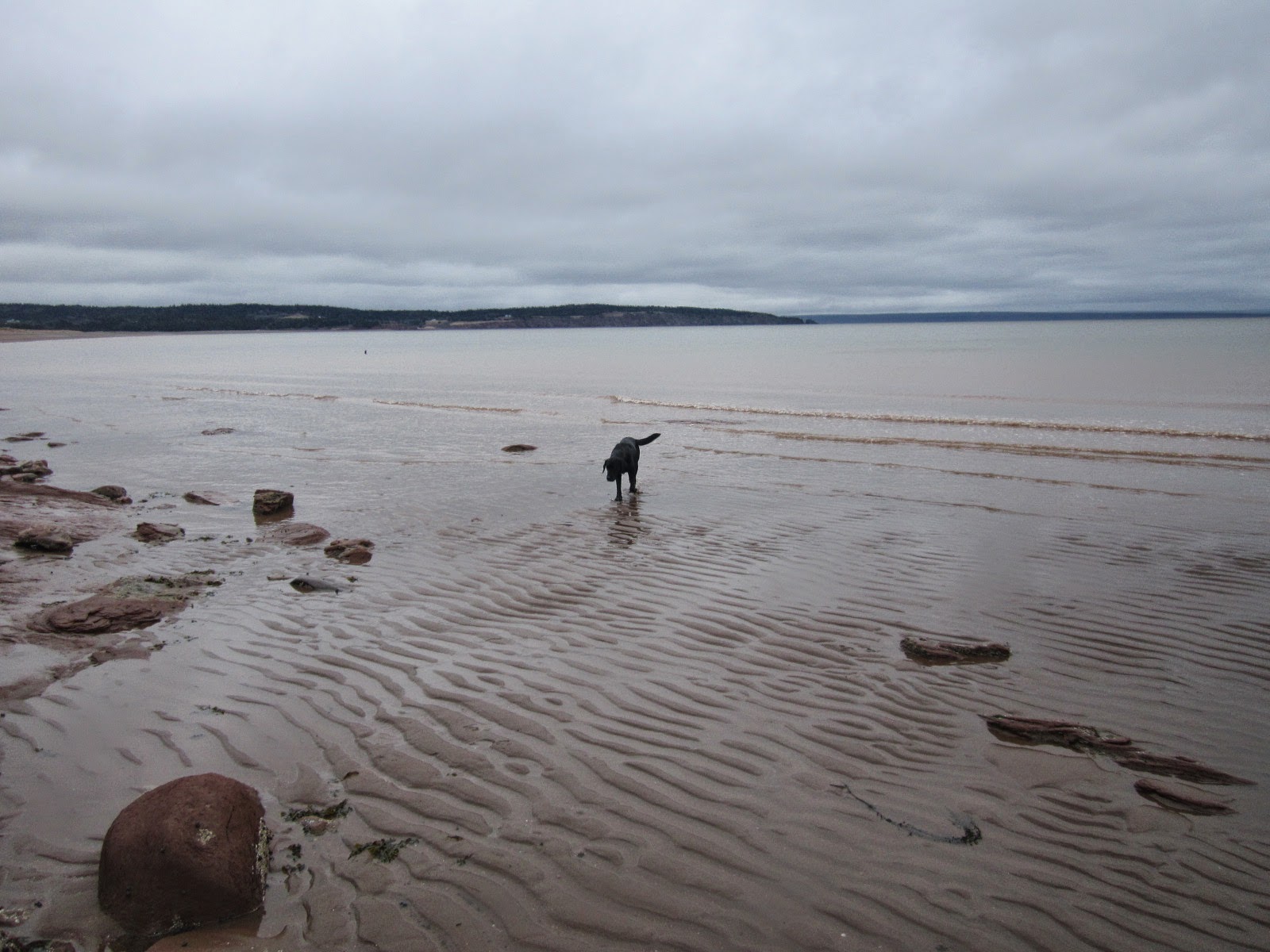 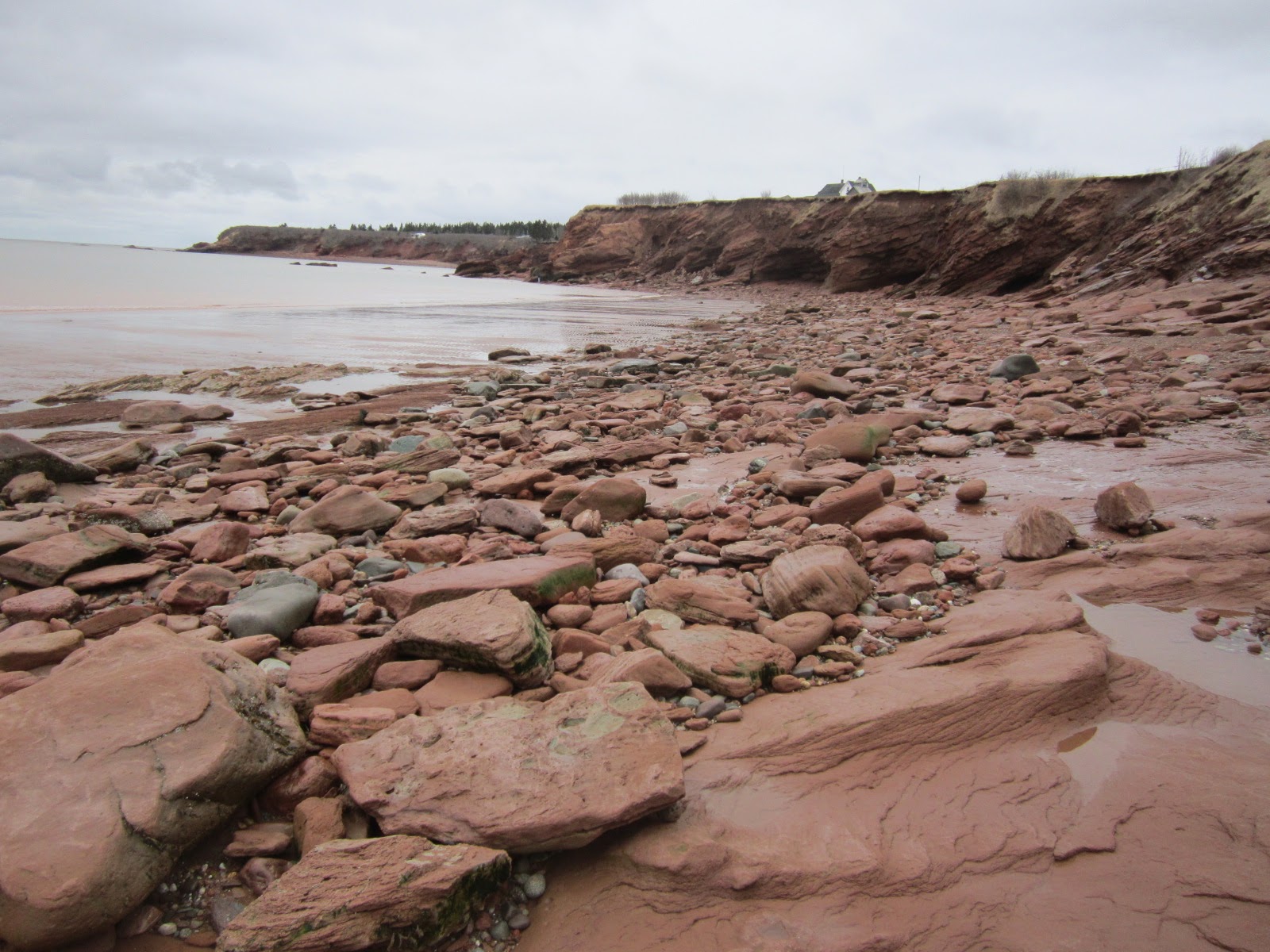 We were amazed at how quickly the water level dropped.  Very cool. 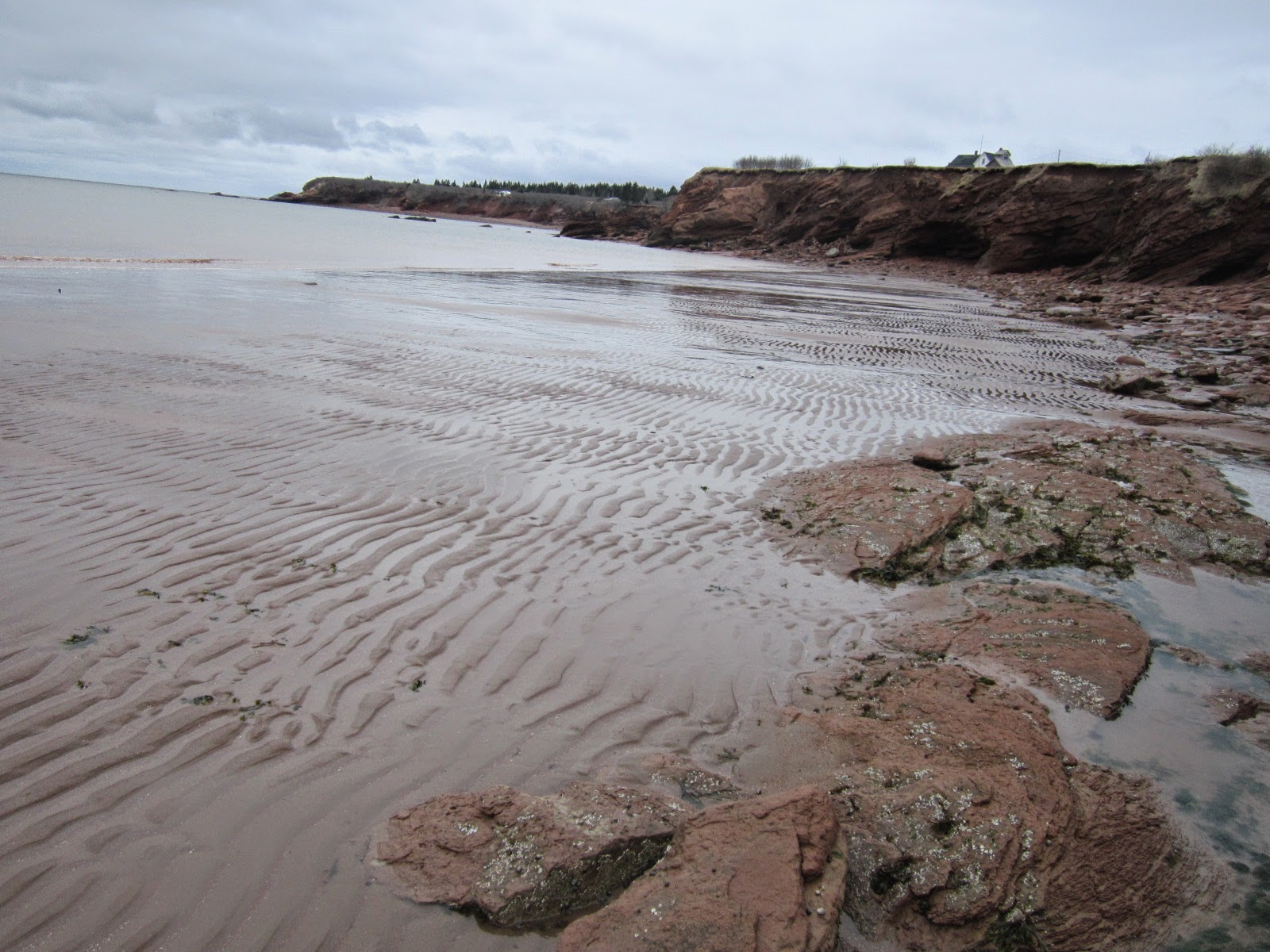 A little while later, back on the rock: 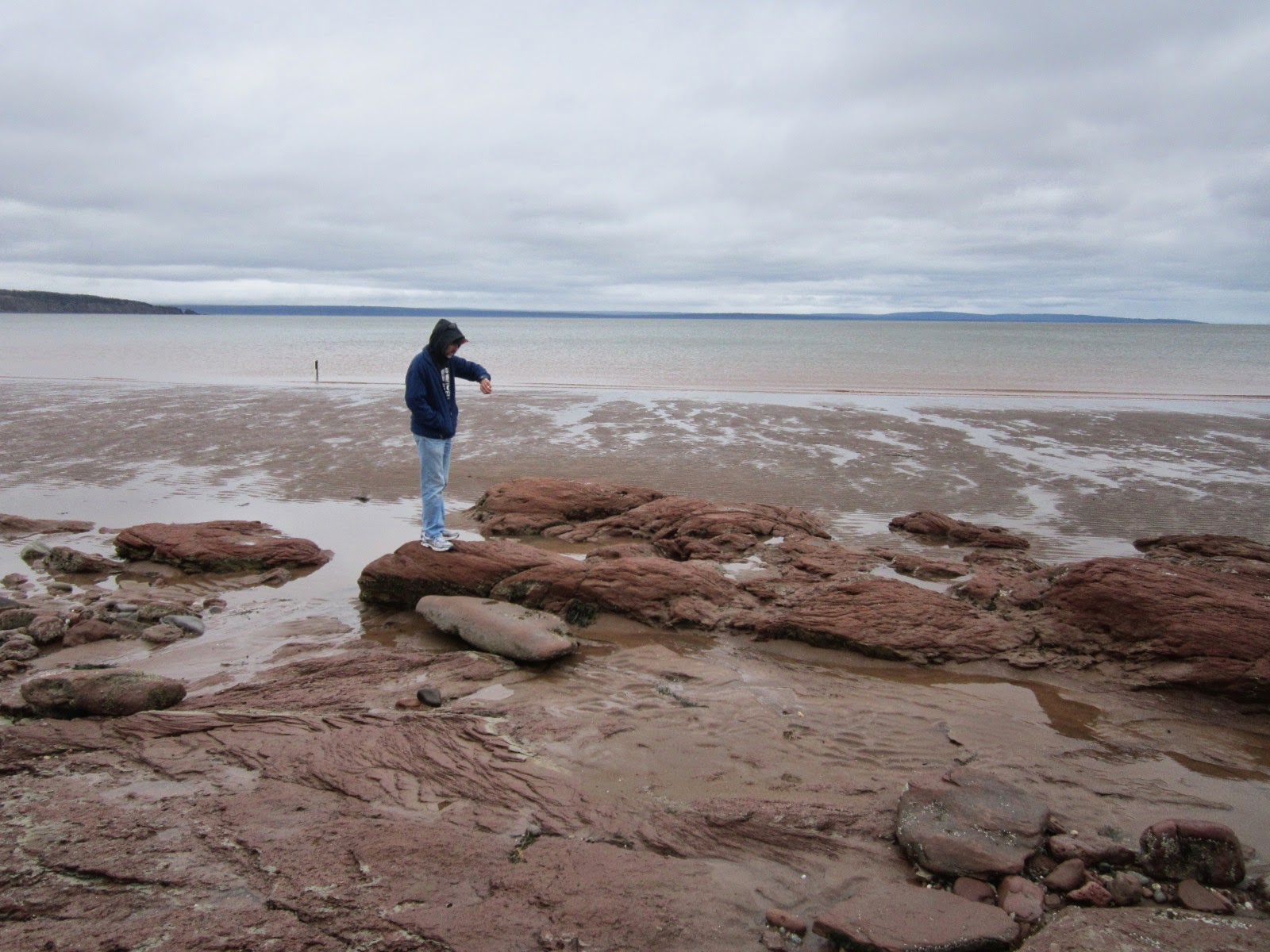 A view across to Cape Chignecto (we would be working our way around to there next): 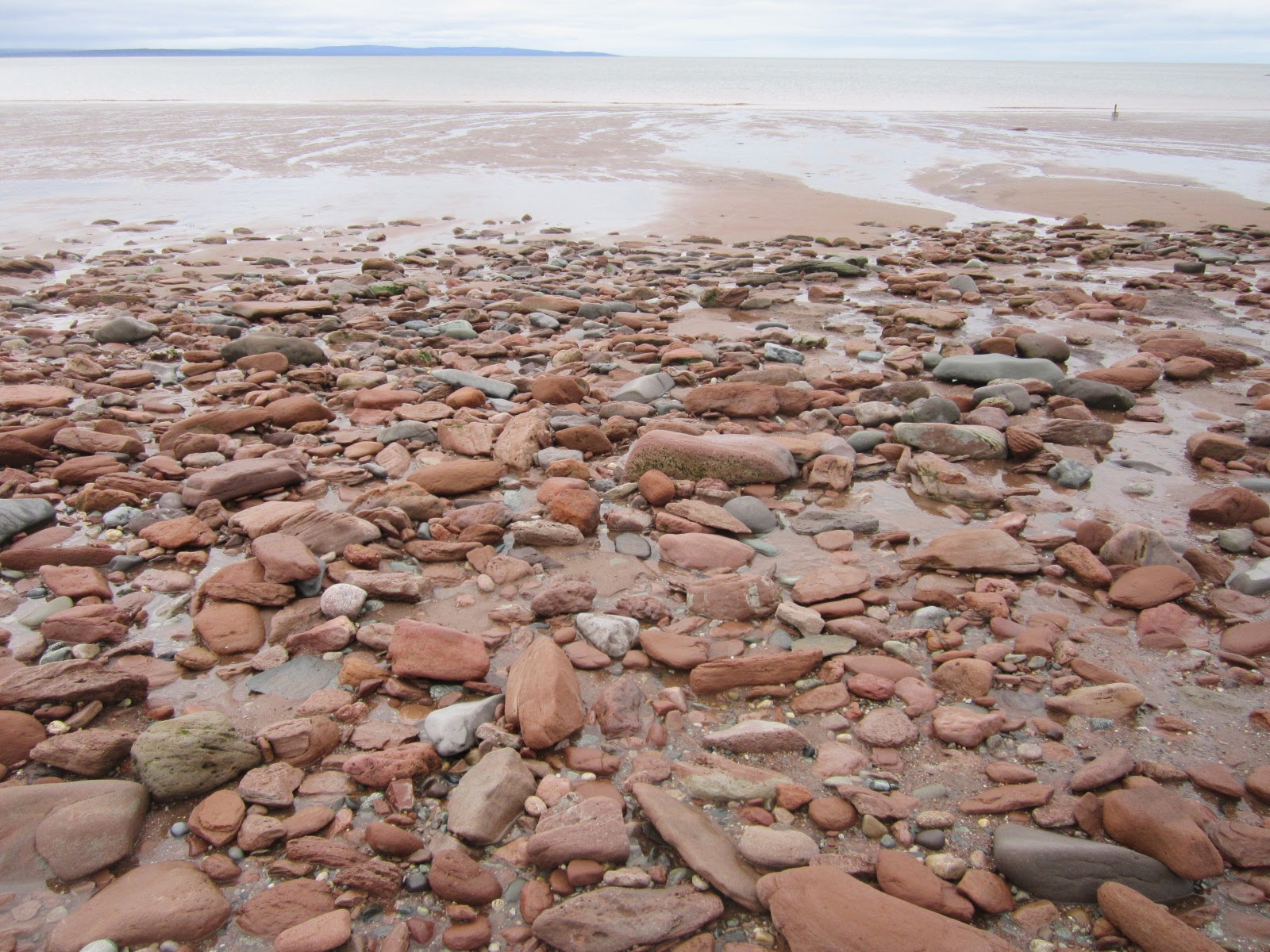 We stopped by Cape Enrage to look at the lighthouse, but a couple of unfriendly (shall we say, enraged?) guard dogs wouldn't let us far from the car.  Oh well, we survived, and I got a couple pictures: 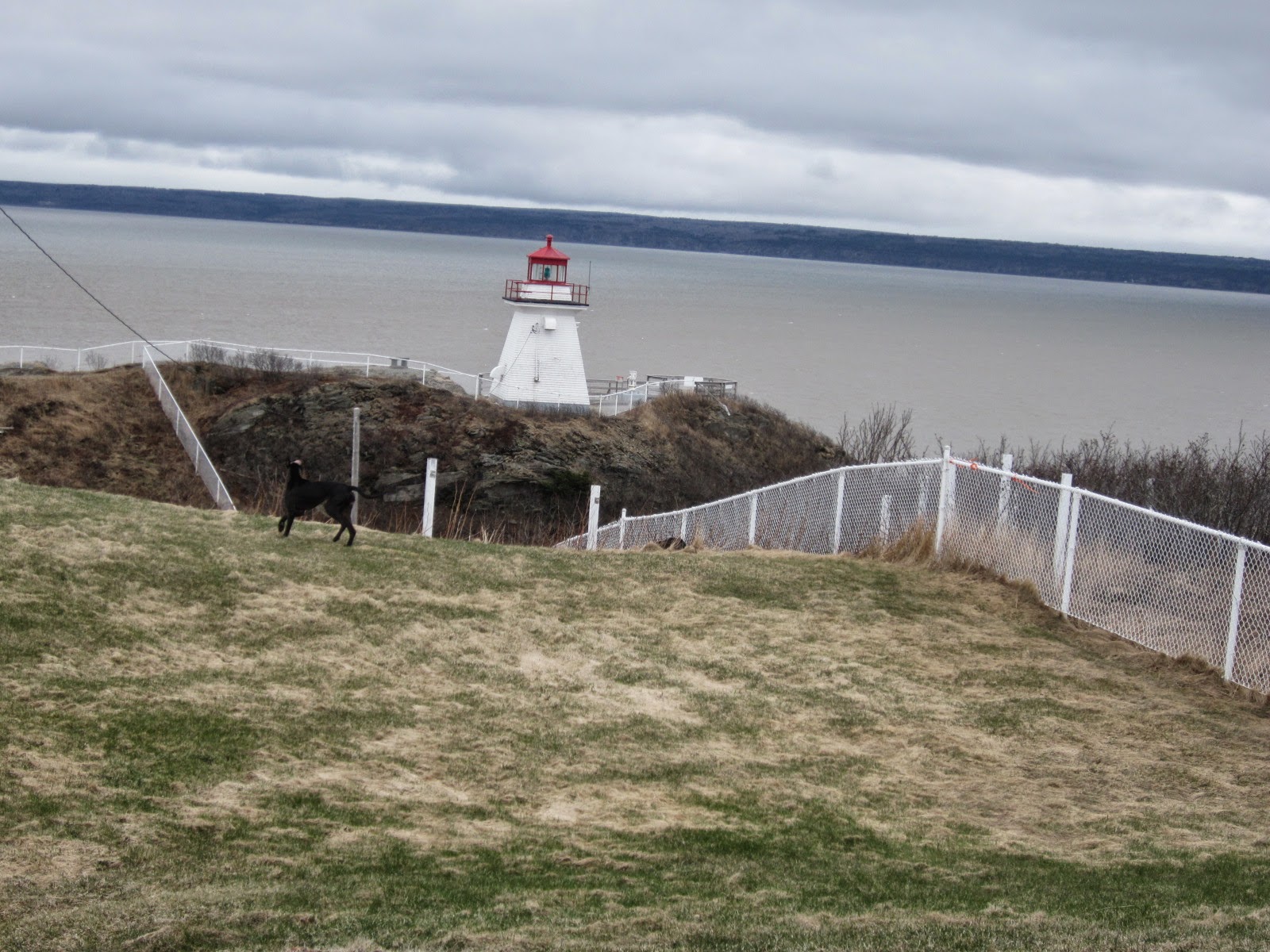 One place Mom most wanted to go was Hopewell Rocks at low tide to walk on the ocean floor amid the interesting formations.  This park, along with many others we went to, wasn't open for business yet because we were just slightly too early for tourist season to begin.  Also, it was raining and cold.  But we did find a way down! 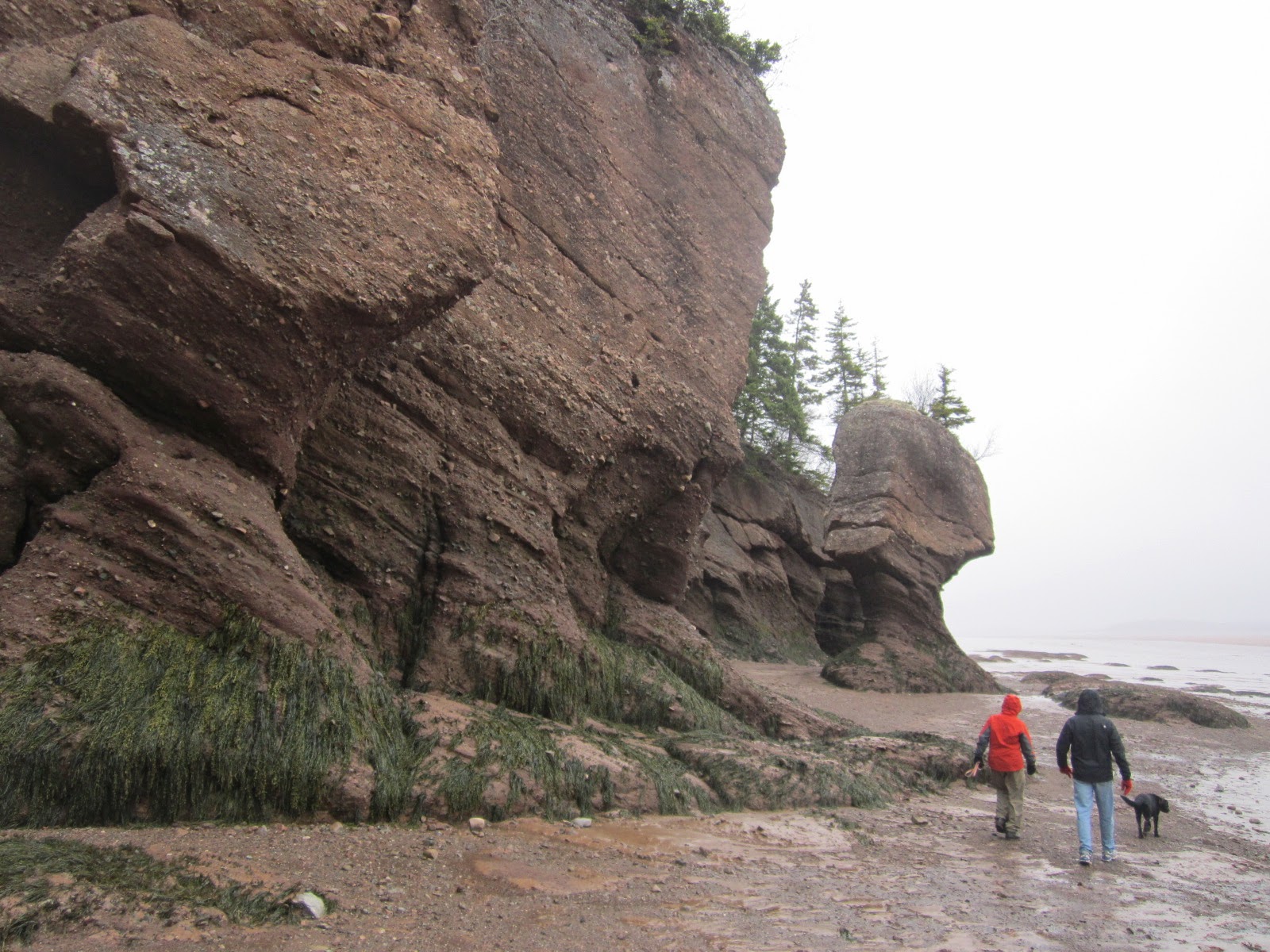 The rock formations, with trees growing on top, were mighty cool: 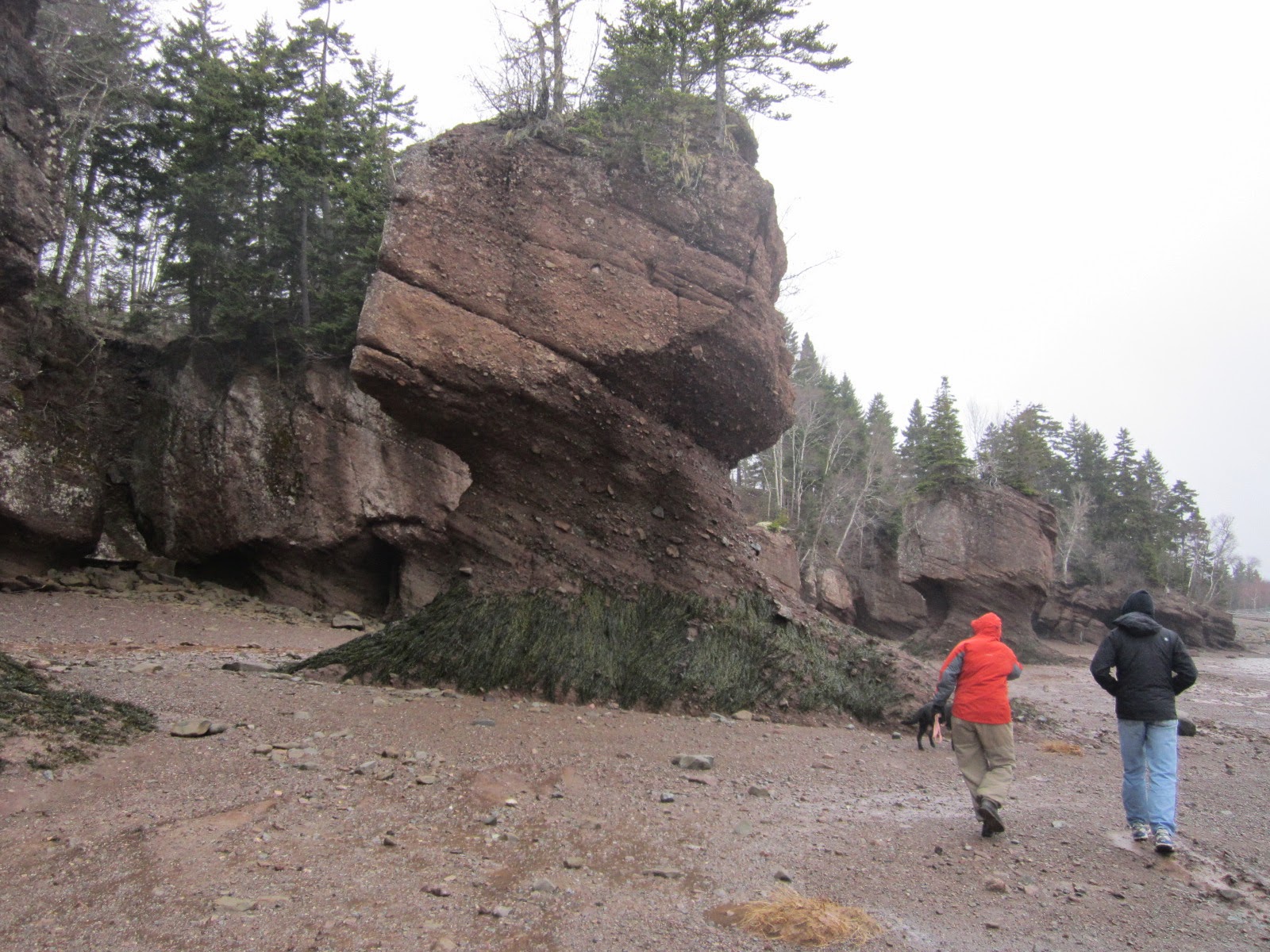 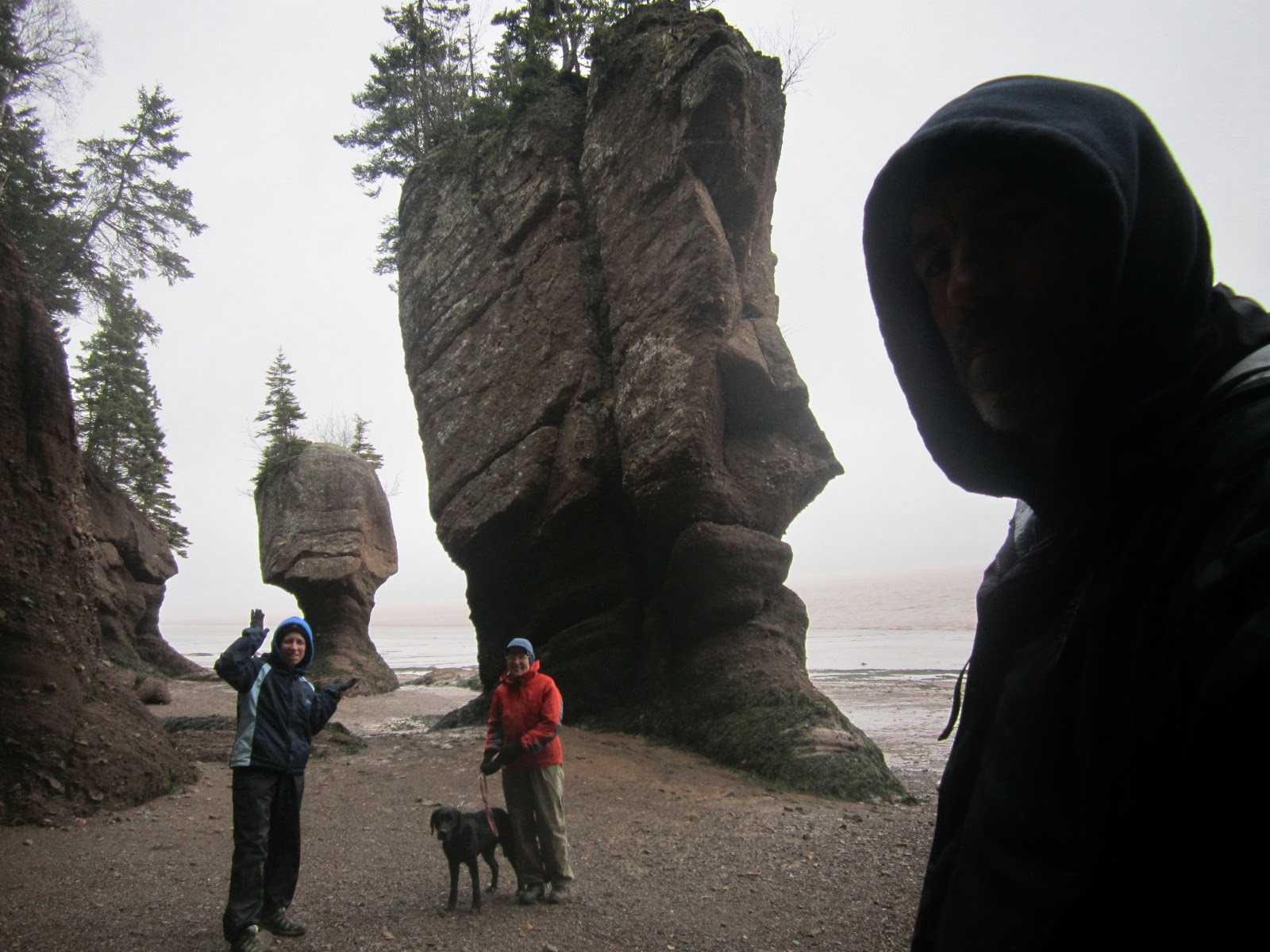 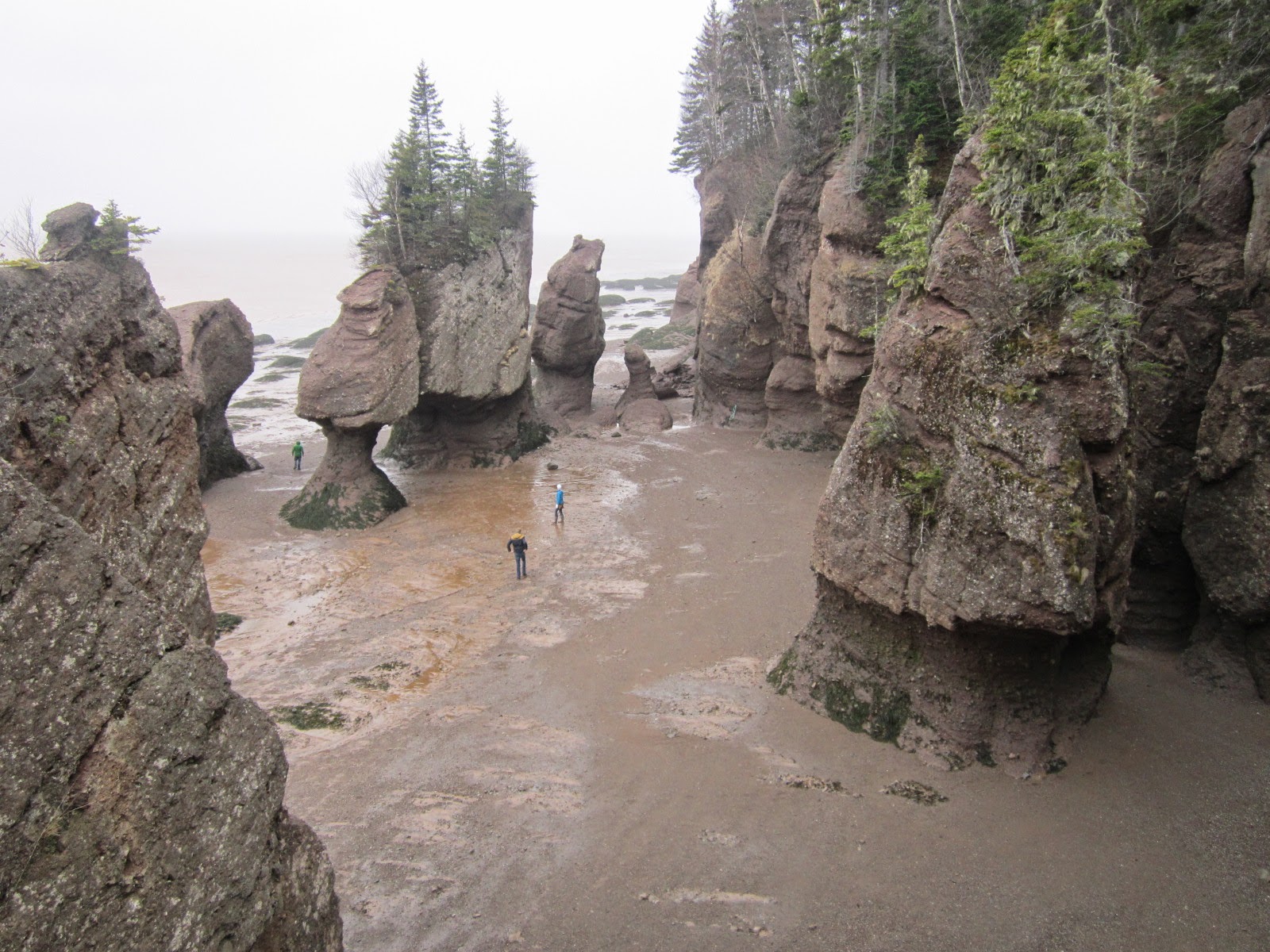 Oh, and we had to walk through snow to get there and back.  I figured I should document this so y'all would believe me.  We had to work for this one :) 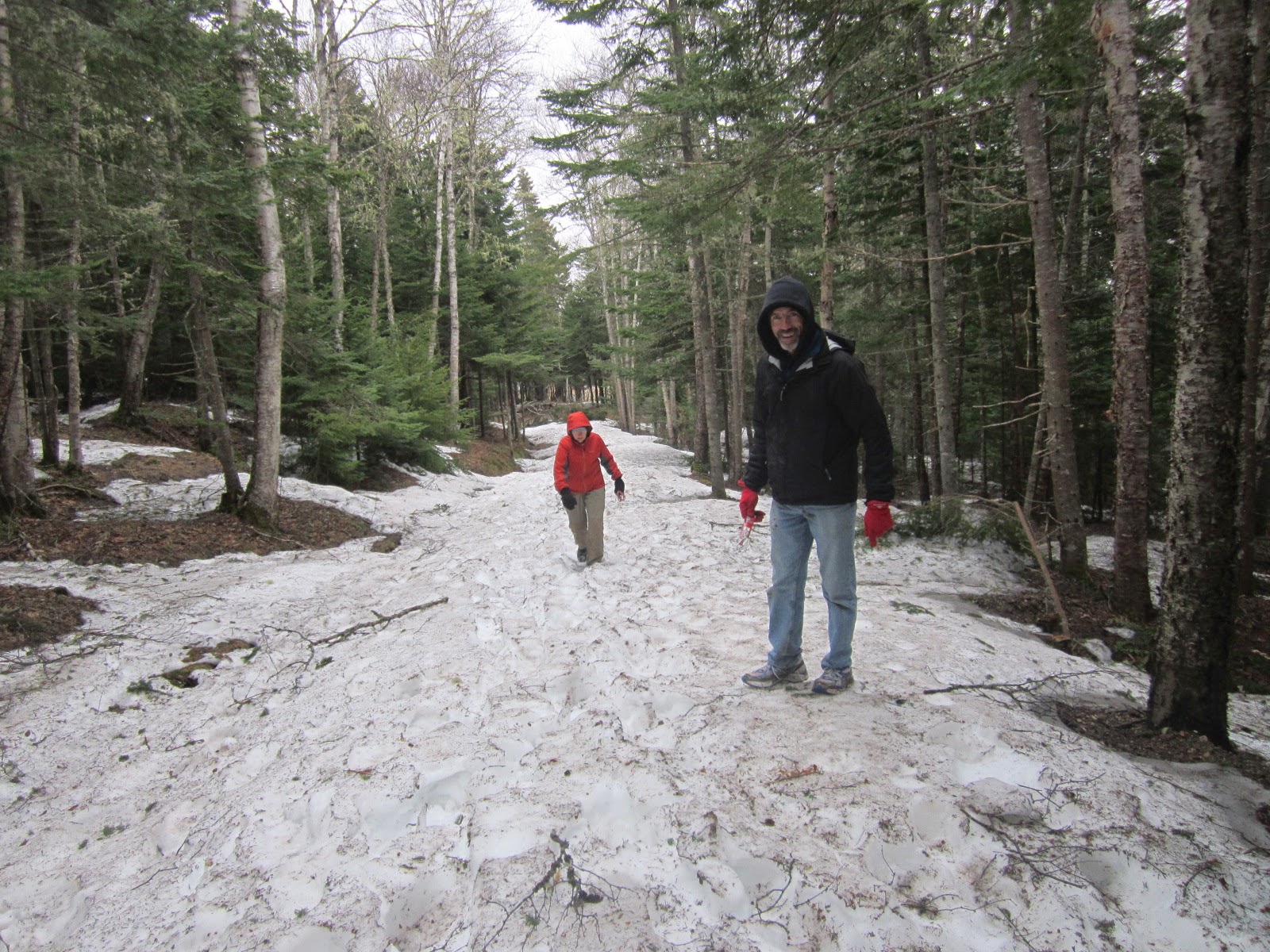 But it was worth it.  An excellent start to a fun trip!