John was excited to have the opportunity to join a CDT trail work crew for a week+ in the Bob Marshall Wilderness, not far from Glacier NP.  We drove around to the east side of the mountains to drop him off.

Packed and ready to go! 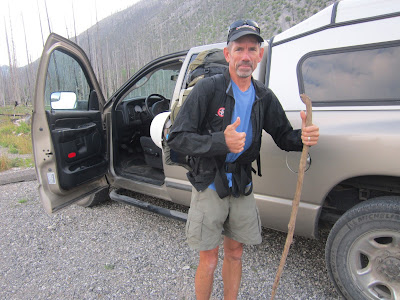 Checking out the map of "The Bob": 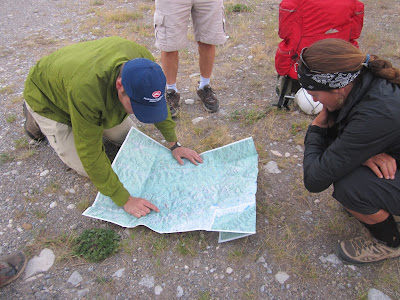 Mules that would pack in the camp, food, and supplies for the group: 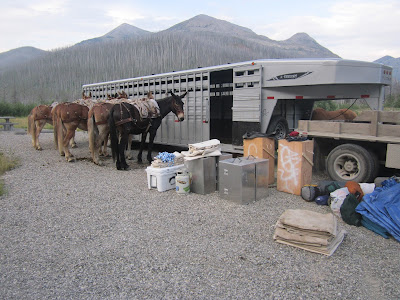 Setting off on a 15-mile hike into the wilderness - see you in a week, John! 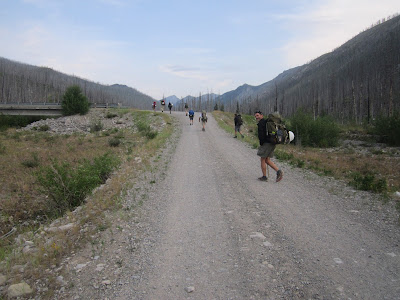 John took the following photos from camp and their work site.  He just delivered them back yesterday after a successful trip, so for once here is a timely set of pictures.

The horses and mules hanging out at camp after hauling a bunch of stuff in over a pass on the Divide.  Much deserved rest: 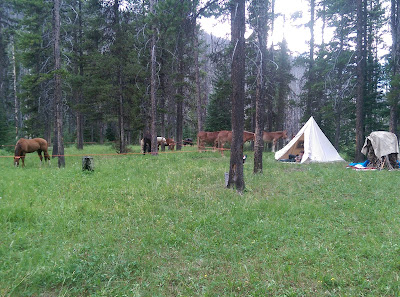 The start of a latrine.  Actually, John just informed me that this is the whole latrine: 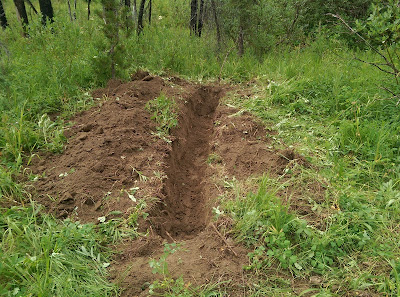 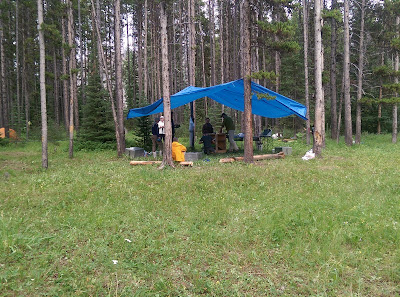 Tent city hidden in the trees: 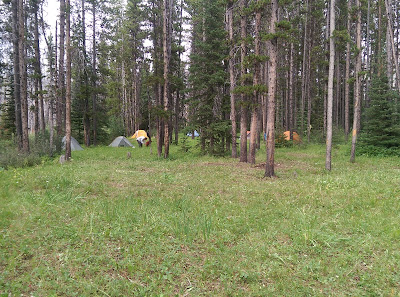 The trail where they will be working (the "before" picture): 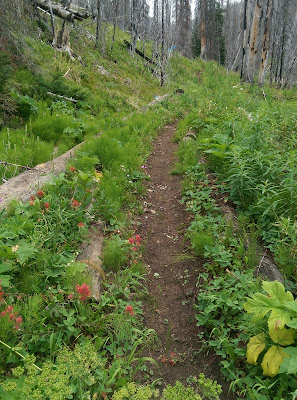 Starting off with some demo(lition): 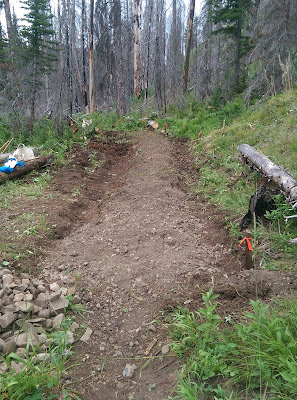 They cut down trees and stripped the bark to make new sides for the turnpike: 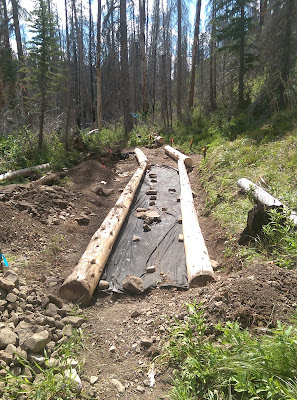 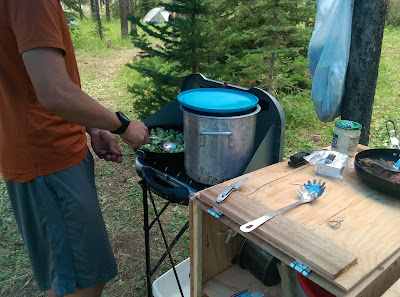 All work was done by hand - no motorized equipment - which I think is pretty amazing when looking at this: 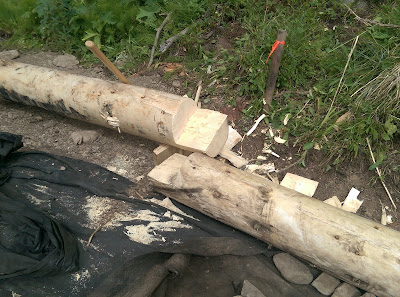 Filling it in, starting with rocks (along with the bag used for hauling rocks and dirt - I think it should be called a dirt bag, but John tells me the actual term is "gravel bag"): 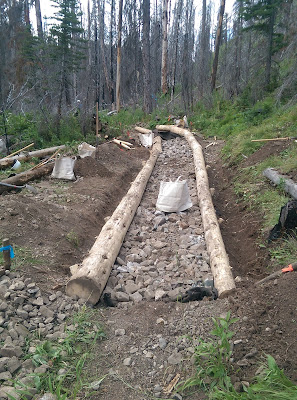 John had a bit of time for some roaming around so he climbed up for a view of the area: 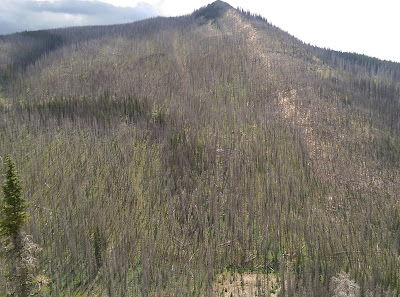 Starting to fill it in with dirt: 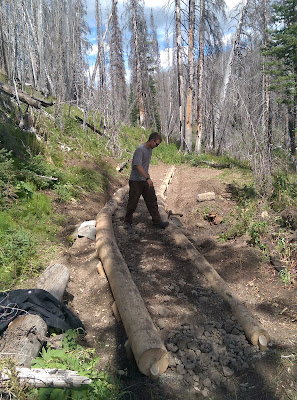 They had a day off mid-week, so John climbed up a nearby ridge for more views: 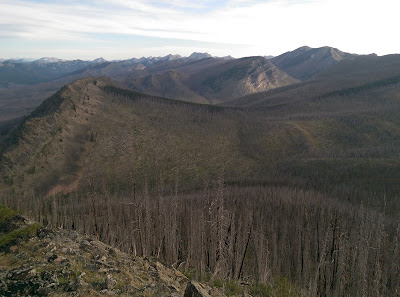 On top of Mount May with the group: 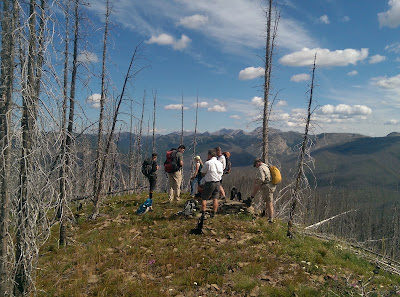 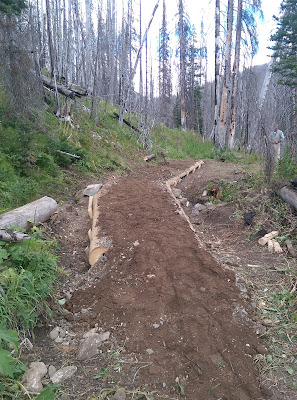 Another set of horses for hauling dirt to finish the work, also for bringing all the stuff back out to the trailhead on the last day: 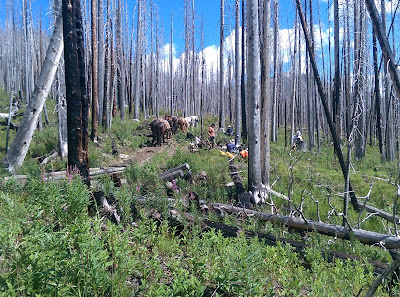 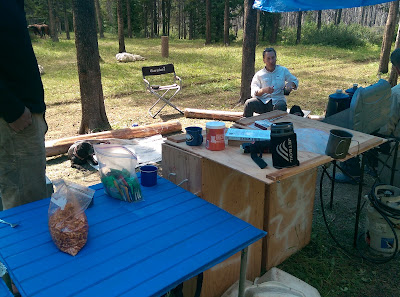 A couple days before hiking out, two dogs came wandering up to the group.  This was really quite odd, in that there were no other people around and no one showed up to claim them.  The dogs looked pretty tired, and it turned out that they had managed to journey from the trailhead, over the Divide, and finally found the trail crew.  This was 15 days after their owners lost track of them while staying at the cabins near the trail.  15 days!  These dogs were really lucky they had not been eaten by something, and also that they finally found some people to help them out.

Via radio the owners were contacted.  A pickup was coordinated at the trailhead after the group hiked out.  In the meantime, the crew took care of the pups and set about planning how to extract the dogs when the time came.

Here is the rig they fashioned to carry them out, not an easy addition to the loaded packs on their backs.  Luckily one dog seemed to be OK for walking most of the way (after jumping out of her Port-a-Pup bag) so there was only one dog-on-a-pole to share among the hikers. 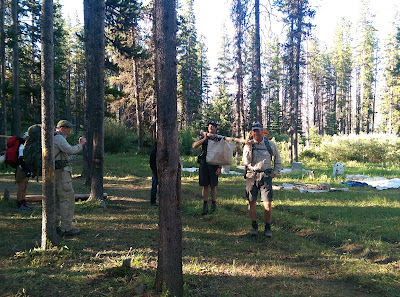 John also took a few turns with dog-hauling duty.  Everyone was pretty tired when they got back to their cars that afternoon! 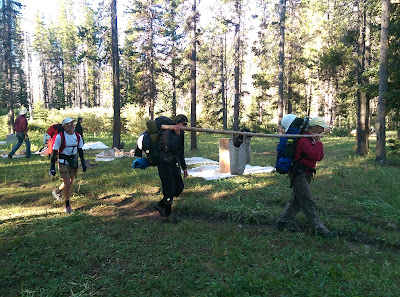 One new turnpike, two rescued dogs, and a bunch of tired but happy workers.  All-in-all, a successful trip!