John's here to visit, RPI men's hockey team is playing at home this weekend, and it happens to be the Big Red Freakout! How could I pass it up? Supposedly I didn't get "choice" tickets because I ordered only a week ago - but we liked 'em - front row seats on one of the corners of the rink. An awesome view of the action. 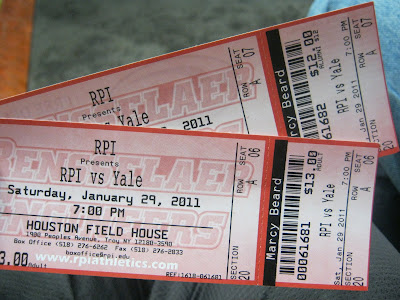 Heading to the game, John wanted to know what all this snow is doing here? 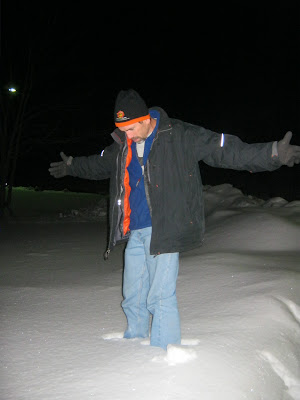 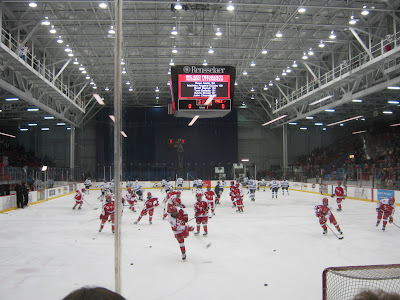 The annual Freakout tradition is give-away of some type. Back when I was a student (late 80s), one year they gave away a vuvuzela to every ticket holder. It was incredibly loud, obnoxious, and totally awesome. Not long after, they banned noise-makers at college hockey games. I'm pretty sure there was a direct correlation. The following year they gave away towels to wave. Hmm.
This year we got these neat (but non-noise-emitting) gloves: 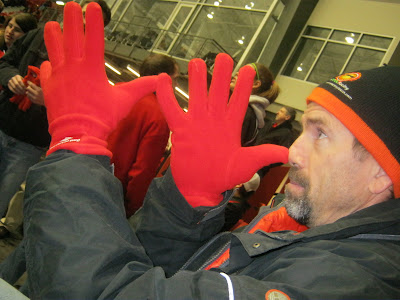 No more sign of The Swarm mascot - now we have Puck Man. Puck Man is really cool! 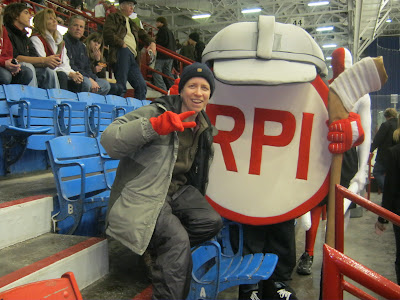 RPI jerseys and red clothing everywhere. I really needed to do a better job with our outfits for this event. And I need to head to the campus bookstore to discretely take photos of all the incredibly creative T-shirts that I saw. Example: "I go to Rennseler Rensseleer Rensalire I'm good at math" and "Rp" (hope the formatting holds for those). 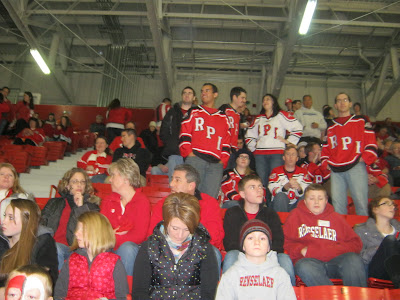 Something else new - during the National Anthem, everyone shouts the word RED during the line, "And the rockets' RED glare" - cool!
The game is on! Yale is (was?) ranked #1 in the country, a typical formidable Freakout foe. But Yale had lost on Friday night to Union, while RPI was on a winning streak. There was hope.
Both teams came out skating great - lots of action, good puck handling, I was impressed. Yale started pounding the puck at our goalie (York) but he held them off. It was pretty unreal watching RPI hockey again after all these years.
A little help fixing the glass where the players had slammed into it and broken the connector piece. I told John it was good that we have engineers in the house, but he corrected me that it was good that there are technicians in the house - better engineering wouldn't have broken in the first place :) 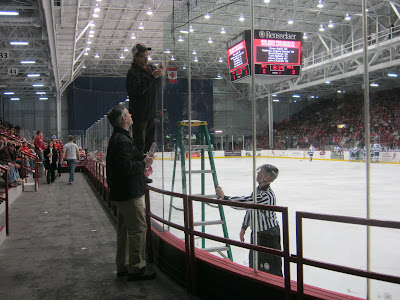 Mugging for the usual selfie: 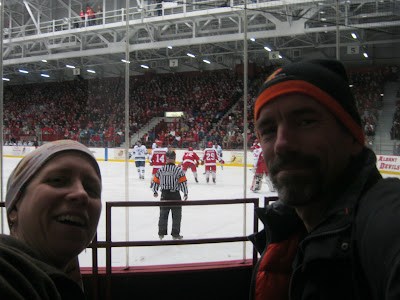 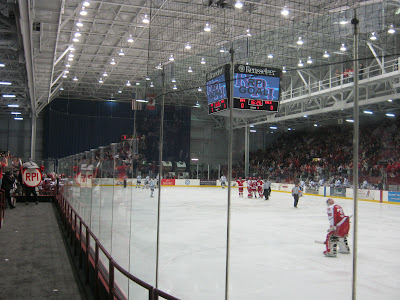 Action right in front of us - I really enjoyed these front-row seats even though it was hard to see the play down at the other end. It was also great fun to be on the student (i.e. louder) side of the rink. 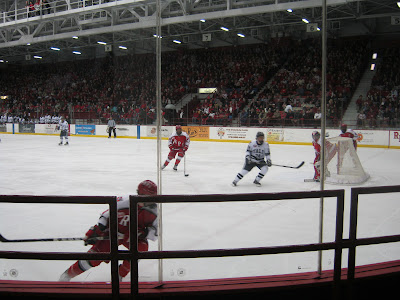 During the break between the 1st and 2nd periods, they rolled a car onto the ice and a guy had one chance to shoot the puck through a tiny slot in a board placed in front of the goal. This is almost an impossible task, so I concentrated on getting a picture just for kicks. But he made it in!!! The whole place erupted, it was incredible. Congratulations on winning a new car, dude! 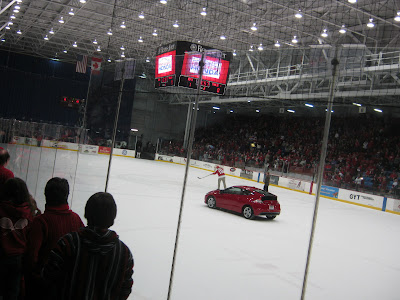 John said that we had already had so much fun, he'd be happy with just that much of the night. I don't think that was a hint (and even if it was, I wasn't leaving yet!) :)
Yale scored a goal in the second period, darn it. The crowd didn't let up with the cheering for the home team and even more loudly jeering the opponents. I don't recall hearing or shouting the words "You suck!" so many times ever in one night (even when we had season tickets senior year). Example - the announcer tries to explain that there is a penalty on #24 of Yale, (whatever his name is) drowned out by the crowd yelling "You Suck!", two minutes for (everyone chimes in with) "Sucking!"
More great hockey, enjoying the game: 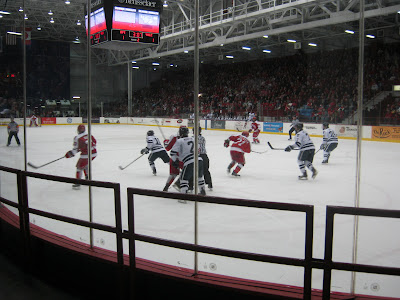 We closed out the 2nd period with an answering goal (this one right in front of us, awesome), so we were up 2-1 at that point. Another excellent 20 minutes of hockey, including a bunch of penalty killing by RPI (the refs started getting yelled at A LOT), amazing goal tending on our side, and some scary moments.
Let's Go Red! 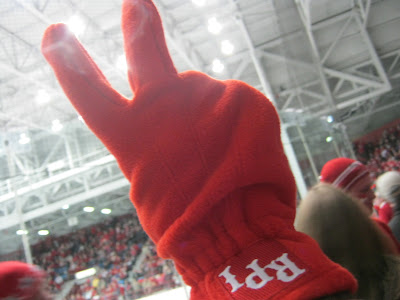 In the third and final period, all heck broke loose. The ref called a delayed penalty on Yale, and just as I noticed our goalie York leaving the ice, I was about to explain the situation to John when suddenly pandemonium broke out - we scored!! 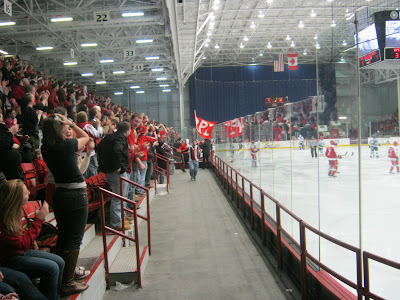 Then we still had a power play (because the teams had been at even strength when we scored), at which point we scored again!! Too awesome. 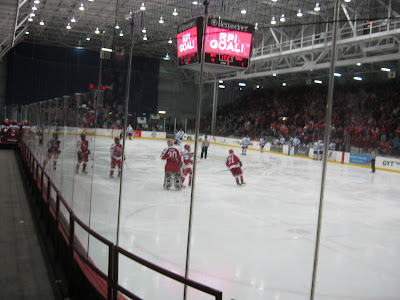 During the whole game, Yale kept getting opportunities at our net, and they kicked our butts in shots. Final tally was 40 to 18 shots on goal. But our percentage of scores vs shots on goal was way higher. Towards the end the chant started up with "O-ver-ra-ted" directed at Yale.
Our goalie taking a breather - he was a force last night: 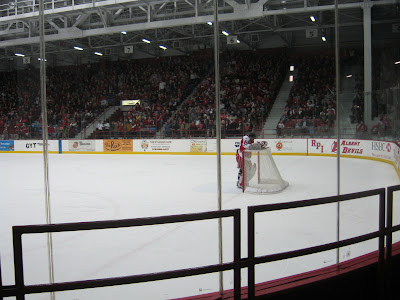 A bit more play before Yale scored their second goal of the game, bummer: 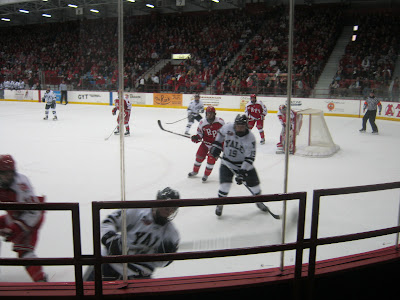 Time was winding down when Yale pulled their goalie to get an extra offensive player. We made them pay with an empty-net goal, and that was all she wrote.
The Engineers celebrating the most awesome win, final score 5-2: 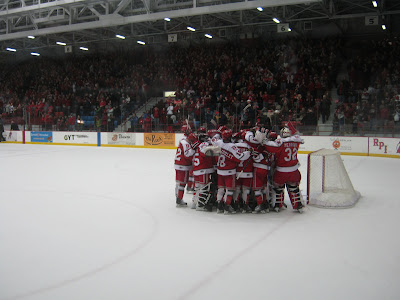 Yay for RPI hockey!! (Hope I don't lose my voice) 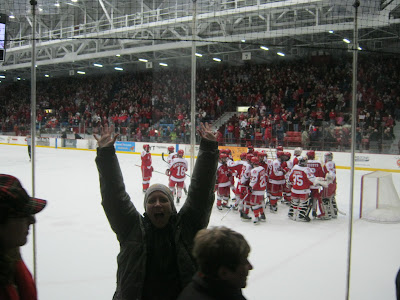 And to finish it off, some shots from our (quieter) snowshoe trek around Thacher SP this morning: 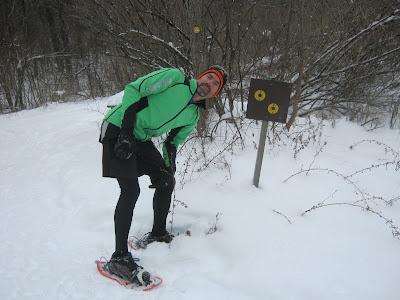 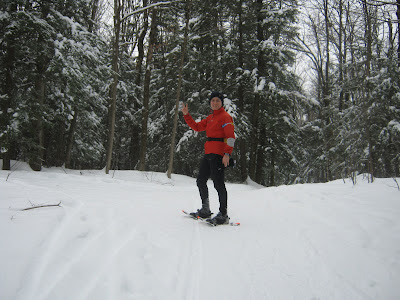 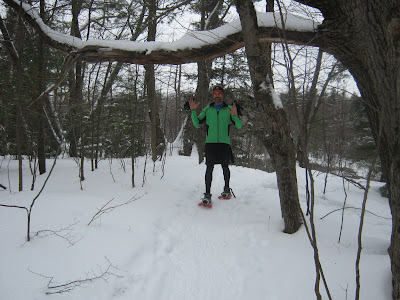 It wasn't even too cold (at least not yet) and we had a great time. Fun weekend!
Posted by Marcy at 12:59 PM