One last bit of Cowboy Tough race scouting to write about, then I can start detailing the actual race - getting there!  By the way, I'm now blogging about August (in September) so I must be making progress.

From Casper I tried to guess the last several legs of the course.  The 163-mile bike ride remained just a general idea (get from Lander to the Pathfinder Reservoir, on various gravel roads, somehow), and the TA at the end of the ride was a mystery (I made a guess but it was completely not right).  But I had a decent sense for what came next.

Legs 10 and 11 involved trekking and packrafting, and it was most logical to assume we'd be on the Pathfinder Reservoir, down Fremont Canyon, across Alcova Reservoir, and down the North Platte River.  In some combination of on the water and on foot.  John and I had a day to drive over to that area and check things out.

Starting at one possible take-out for the end of all that trekking/rafting - Government Bridge: 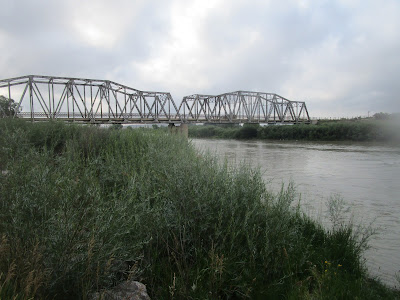 I liked the looks of the North Platte - good current, wide open, and as far as I could tell not many obstacles to be concerned about.  View from the likely put-in where the river flows out of the reservoir system: 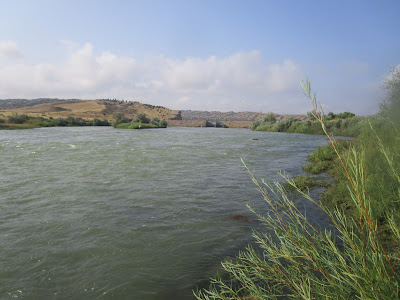 The canyon at the top end of Alcova Reservoir - high and scenic, it looked like a beautiful place to paddle (or to stand on a high rock and watch people on the water): 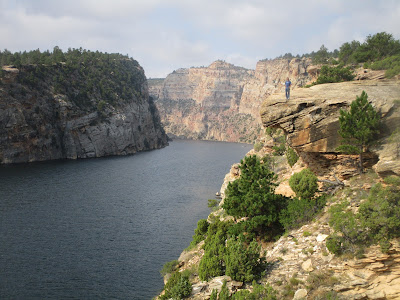 Alcova Reservoir, popular for boating and watersports - and after seeing the more desert-like areas around Casper, I can see why people converged on this lake: 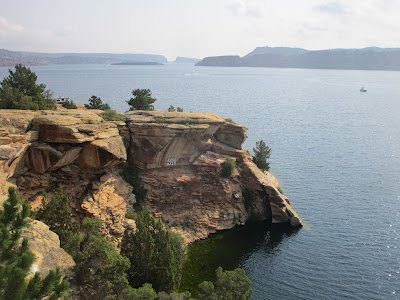 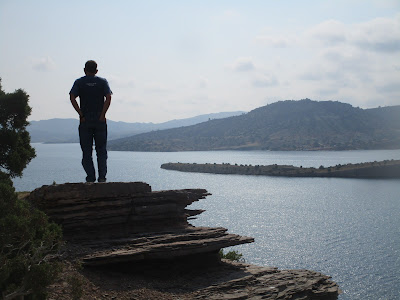 On over to the more-remote Pathfinder Reservoir, where we discovered a small store near the campgrounds.  I enjoyed talking with the woman who runs the store about the upcoming race.  We also scouted a water spigot here but forgot to check around the campgrounds.  Surely that won't be too important... 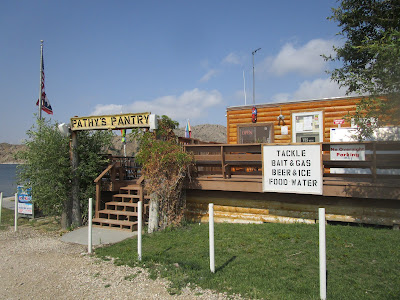 Quite the drop from the reservoir down to Fremont Canyon: 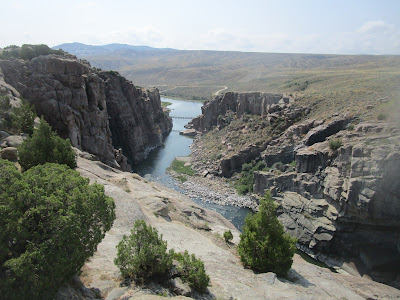 View of the dam from the trail that heads down into the canyon the long way around: 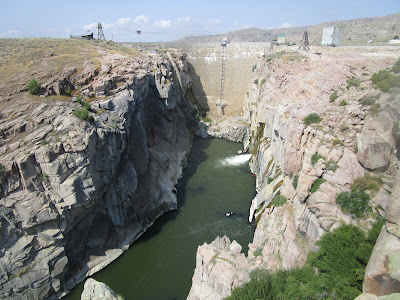 Cute little bridge at the bottom to make a loop to the trail that goes up to the dam on the other side (the short way down): 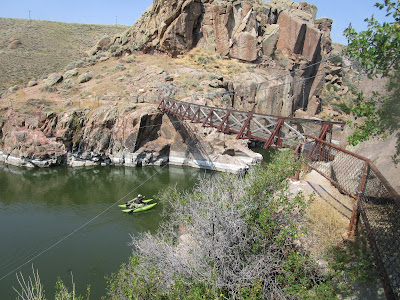 Vestiges from when the dam was built in 1909: 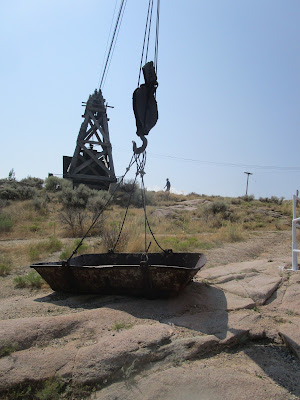 An informational sign describing an igneous dike of basaltic rock - we're always looking for signs of volcanic activity so we had to figure out what this was talking about: 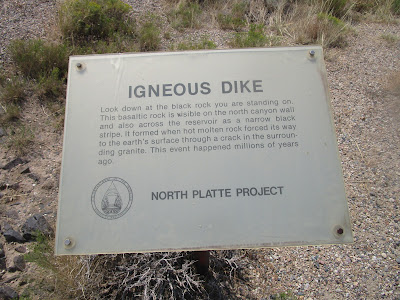 So the igneous dike is apparently the wide stripe that you can see on the other side of the canyon - molten lava came to the surface through a crack in the granite many, many years ago.  Now it looks like this: 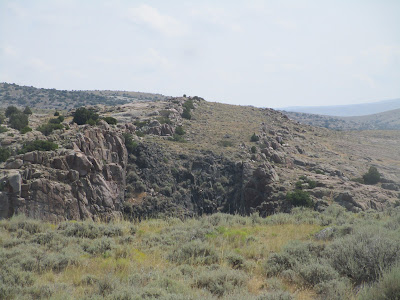 We were amazed to be able to pick it out on the other side of the bay also, heading up into the hills, once we knew what we were looking at: 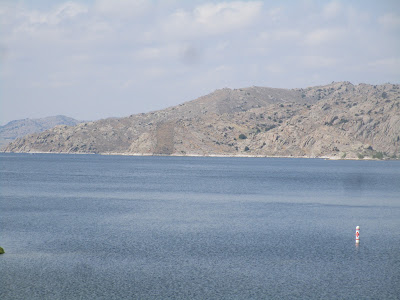 A possible packraft landing spot on one side of the dam: 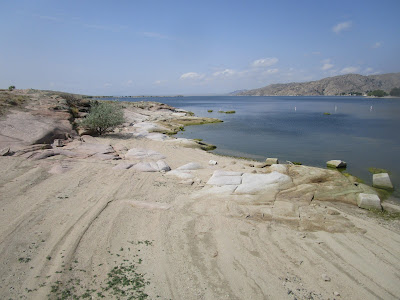 The beach at the base of the dam, another potential take-out: 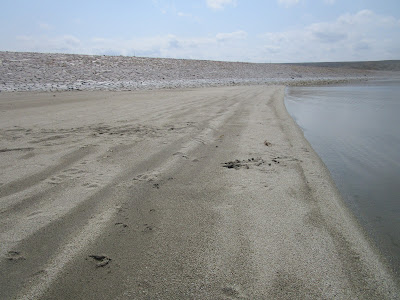 A view into the canyon - from on top of the dam: 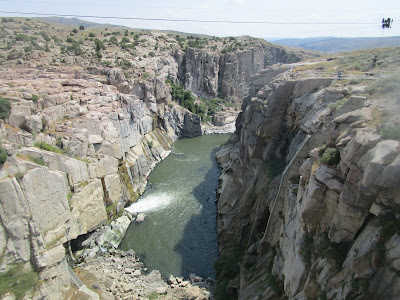 Yes, you are allowed to walk across the dam!  Now that's pretty cool.  And unexpected. 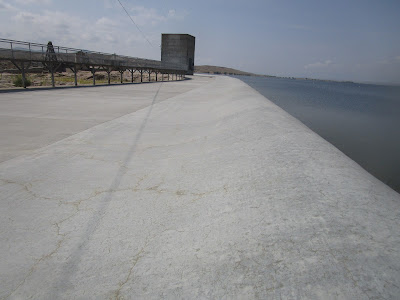 Heading down Fremont Canyon to get a sense of what the leg 11 whitewater might look like.  The river started mostly shallow, something we might want to portage around? 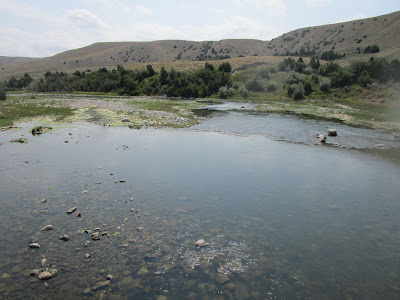 The wider valley heading for the narrow canyon - lots of shallow water and walking-the-boat opportunities: 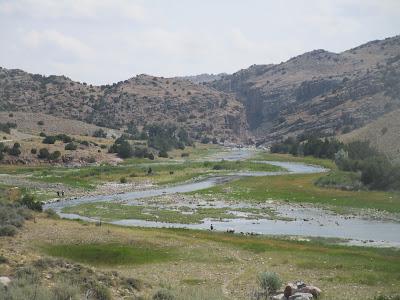 I found this story about John C. Fremont, the namesake of both the canyon and the reservoir above it:
https://community.nrs.com/duct-tape/2012/06/10/inflatable-boating-in-the-west/

I was hoping our team would avoid any "dumptrucking of the crew and cargo into the water" during the race.

Because, truly, there are a lot of rocks in the canyon: 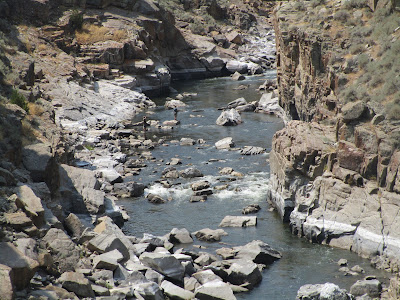 Maybe some spots where our rafts would be OK, interspersed with more rocks: 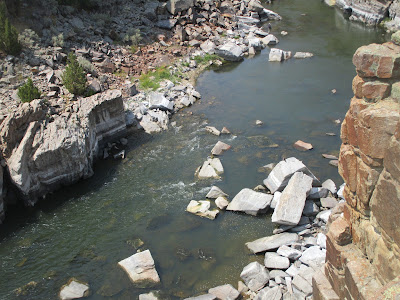 I was in a rather sour mood contemplating taking a packraft down through the canyon.  Lots of head shaking.  Maybe we could portage around all of it?? 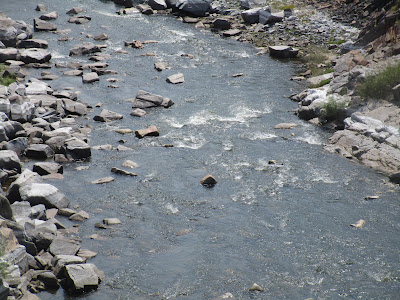 Looking for a possible put-in near the high bridge (the last place we might trek to from the dam), we found a possible option but it wasn't great.  The canyon was really pretty though: 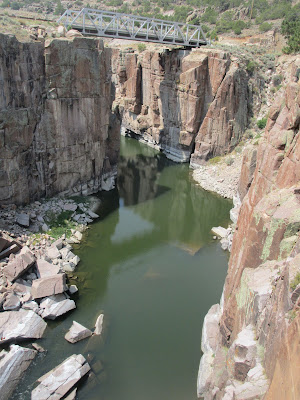 The river looked deeper and with fewer rocks in this area, so that was something: 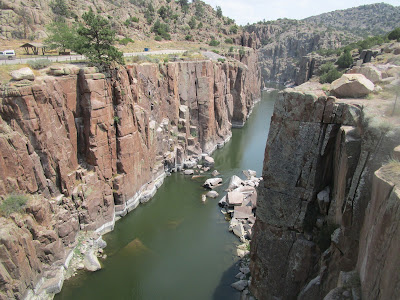 Trying to get a glimpse of the last 3 rocky sections and ways to carry the rafts around them, before the team would reach the wide-open water that eventually emptied into Alcova: 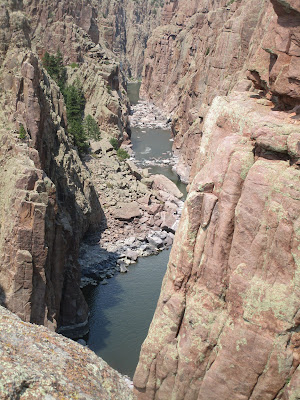 A couple things happened next.  I went into a Casper gear store and talked with the maps guy.  He sounded surprised that the race might be allowed to send us all the way down Fremont Canyon to Alcova, as there's a power plant outlet just below my photo above.  Apparently almost no one gets permission to boat through there.  Hmm, well, that's going to change some of the elevation stats for this leg of the race if we have to go around.

Also, John went back the next day to look more closely for an alternate river access spot (we had driven past one place that I started wondering about).  He took a top-down picture of the slot part of the canyon, super cool: 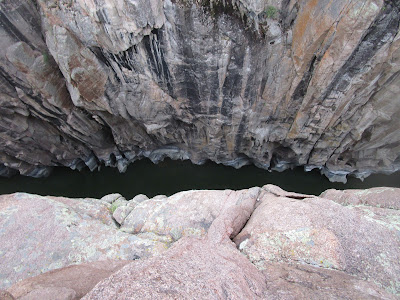 In the middle is a "sieve" that requires climbing over, so that was interesting to see (at least in a photo, from the top, with low water conditions): 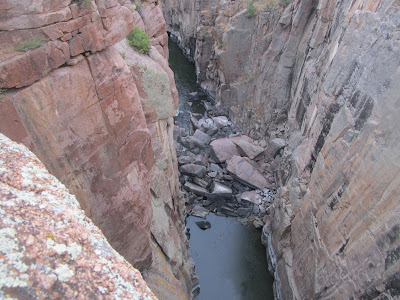 While he was wandering around he found a checkpoint flag, pretty funny! 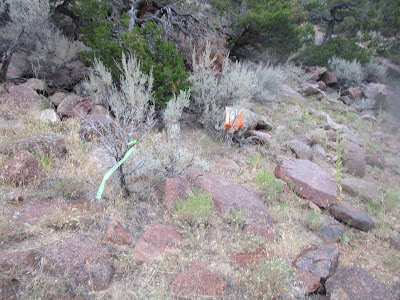 Even funnier was that we didn't even visit this spot during the actual race.  Ah well, it was a good try.

One last scouting mission - we drove the road up and over Casper Mountain just to see what we could see.  Nothing special, and actually I was expecting the final 33 mile bike leg to detour somewhere through the mountains because the amount of gravel listed for that leg was too much for the route to stay on the main road.  No time to play with anything besides the satellite view for that one, I figured we'd figure it out when we got there.

Oh, and then I spent a few hours focused on the first trek, when I went back to review it and realized it wasn't an obvious straightforward trail.  Yikes, that one could be a challenge!  We'll see what happens with that.

Next up - teammates arrive in Wyoming!