Moving on to Lander, which I enjoyed so much that we extended our stay there instead of hurrying back to Casper.  Sleeping Bear campground was great, riding around town and up to Sinks Canyon was enjoyable, the bike and gear shops in town were so helpful (especially The Bike Mill and Wild Iris), and I had plenty to keep me busy with scouting and gear prep.  It was a bit warmer than Dubois and Pinedale but not as hot as Casper, and I figured some heat acclimation was good for me.

Making progress on the bottom mount for the bike box.  It was great designing our own box to the race specs and custom fitting it for my bike.  It helps (a lot!) having a handyman for a husband. 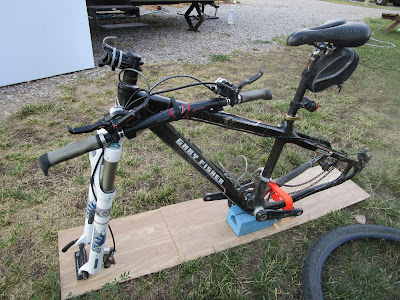 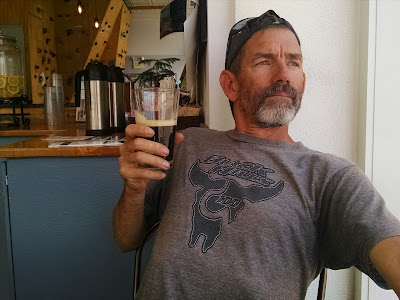 Initial pile of mandatory gear for Cowboy Tough, with some modifications coming (mostly fixing and paring down the med kit - for a 5-item med kit list, that sure took way too much time and energy): 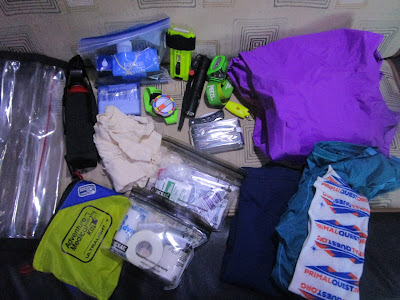 The almost-finished bike box, with very-useful side handles: 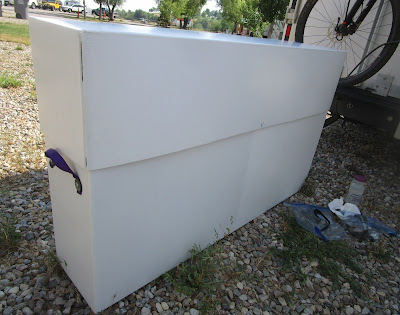 Everything fits, with room for some gear - thank you John! 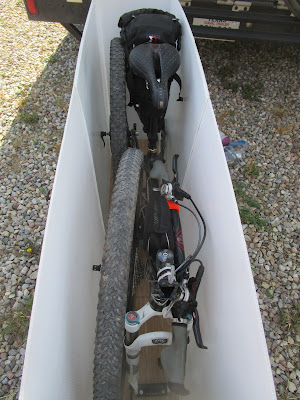 John headed off to Montana for his week of CDT trail work, and I spent the time in Lander doing gear prep, practicing loading and unloading the bike in the box, and scouting in the area.  I was well into spending every waking moment fixated on what I needed to do to get ready for the race (and to figure out where the race was going to take us - the fun part!).

However, I did take time out one evening to see a presentation by Alex Honnold about his free-solo climb of El Capitan.  He just happened to be in Lander and I just happened to see a flier about it - and it was amazing!  He showed lots of great photos and talked about preparation and his experiences.  I actually related to it a lot, what a humble and interesting and inspiring person.

So anyway, back to the race prep.

I figured I should focus on Sinks Canyon State Park, since that was a big part of the 2014 Cowboy Tough race and seemed a logical midpoint for our race this summer.  Plus, it looked like a neat place to go play around.  The bike ride up from town was a good gradual climb, a nice warmup (and a fun return trip down).

Taking a break my first time up there to get a picture of the start of the canyon: 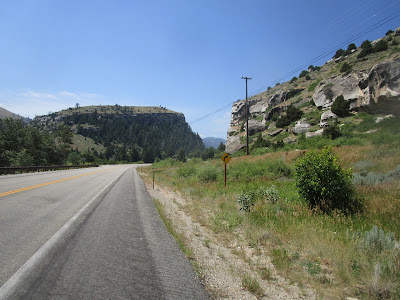 Checking out the water spigot at Sawmill Campground, the likely TA spot: 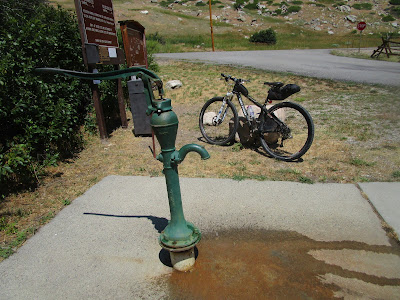 The site of the rappel in the 2014 race - it seemed too close (i.e. right across the road from the TA) for it to be our rappel, as we were supposed to be hiking 4 miles roundtrip to get to it.  I spent some time trying to figure out where our rappel would be, which led me to some interesting places but none of them were right. 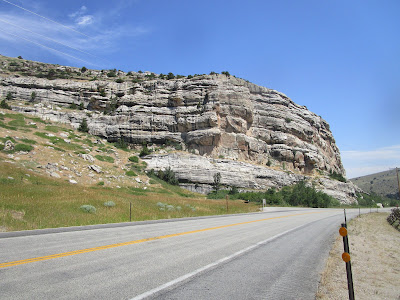 The "Rise of the Popo Agie" - so this needs a bit of explanation.  The Popo Agie (which I never did exactly pronounce correctly, but at least I tried harder than Dave) is the river running through the canyon.  Further up the hill I would find the "Sinks" where the river goes underground for a while.  Here's the spot where it comes back out.  Also where you can feed the giant fish, so they tended to hang around waiting for "people shadows" to signal that they should start positioning themselves to catch fish food: 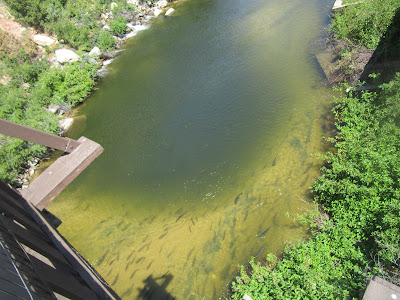 The visitor center near the Sinks has a bunch of great info including samples of all the many layers of various ages of rocks in the area.  Lots of geology on display. 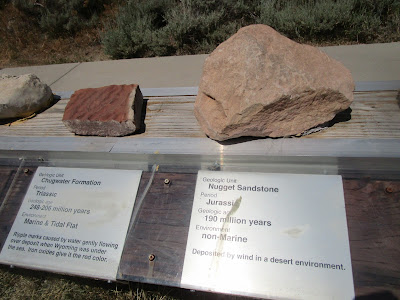 The rushing river coming down over the rocks... 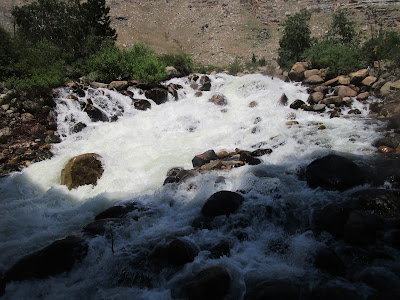 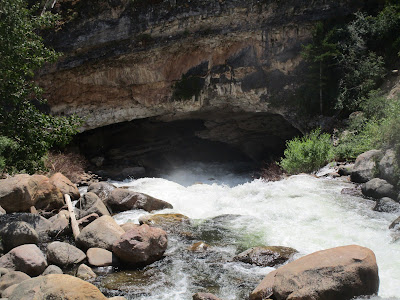 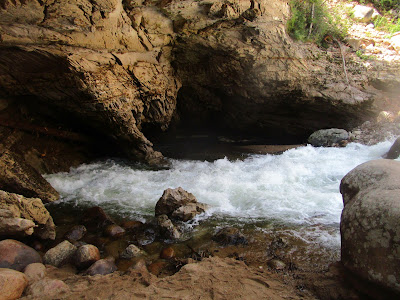 The "end" of the river is just a little whirlpool - so cool!  I've never seen anything like this: 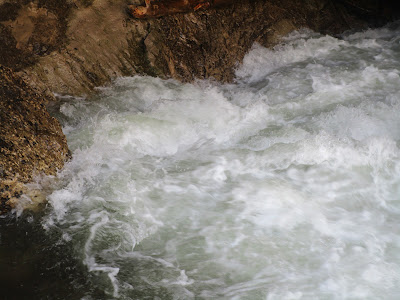 A video of the Sinks, trying to capture this phenomenon on film:

A sign with some explanation - how the water flows through caves in the limestone, how they proved with dye that it's the same water coming back up at the Rise.  The most interesting part is that the water comes back up over TWO HOURS later and there is more of it coming up the Rise than dropping into the Sinks.  Apparently those pieces are still a mystery: 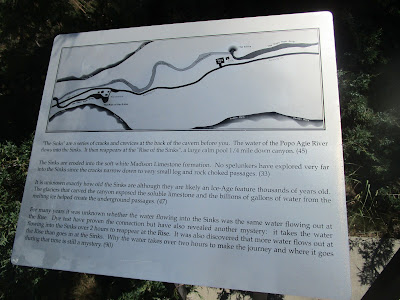 The suspension bridge leading to the trail system from the Popo Agie Campground: 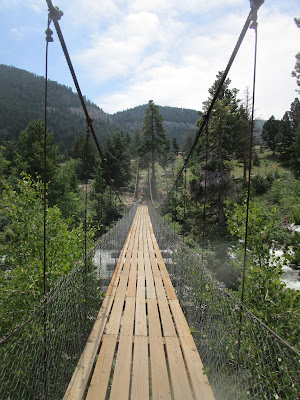 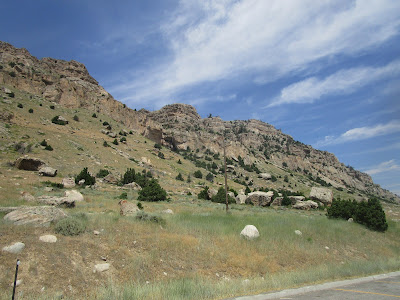 Scouting out the possible cutoff road if our team were to decide to bypass Lander during the race: 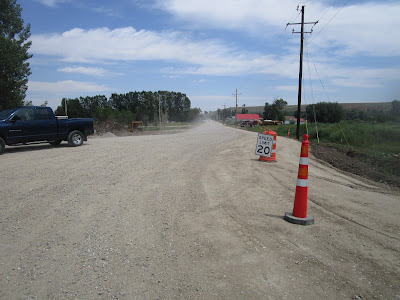 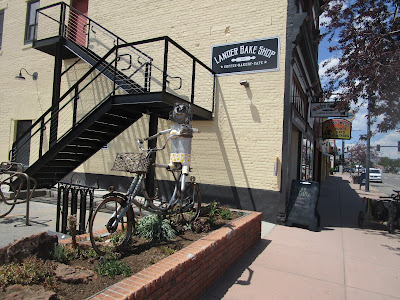 I enjoyed walking around town and seeing what other sculptures I could find, like Little Chuckie: 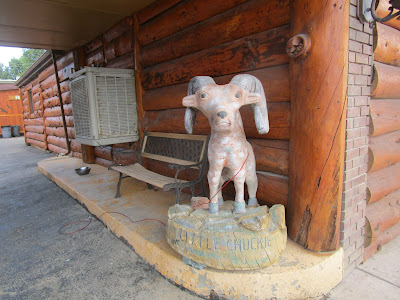 And this amazing bison: 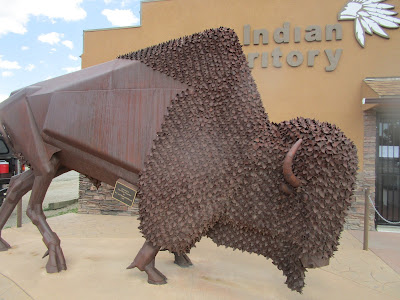 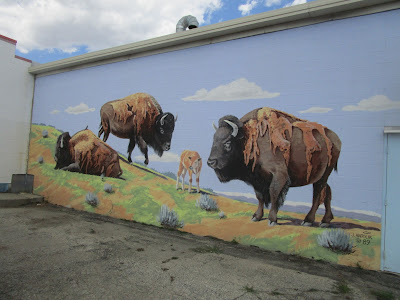 I stopped in at The Bike Mill to get some work done on my bike (my back brake had been giving me issues for a while, so I finally just replaced it and was glad everything worked great during the race).  Anyway, I noticed a trail map for Sinks Canyon on the wall and figured I should go ride and run some of these.  All the more reason to hang around Lander for a few more days. 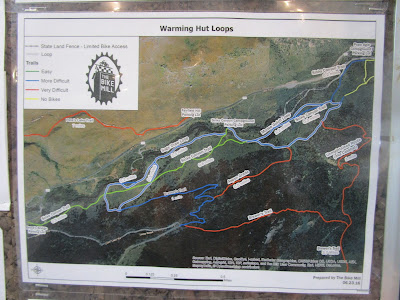 City Park in Lander, where you can camp for FREE for up to 3 nights, hey that's pretty cool!  Good to know that's an option for future reference. 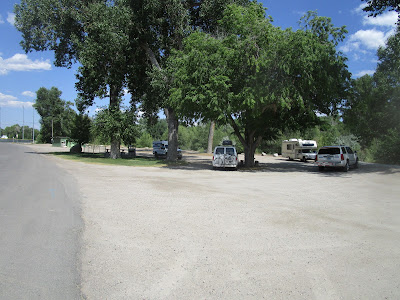 The well-marked trail system at Sink's Canyon, now that I was on a mission to see as many of the trails that I could: 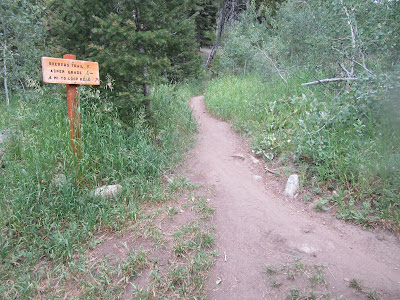 I hiked up Brewer's Trail and got an excellent view of the cliffs across the way.  It was a good time to admire the scenery, because once I started training to ride downhill on Brewer's I really needed to focus my attention a bit closer at hand: 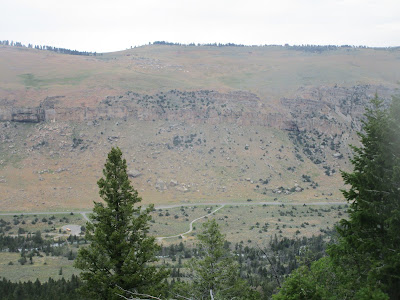 The rocky spot on the trail, making notes for where I might get off to run and where I figured I should be able to stay on the bike: 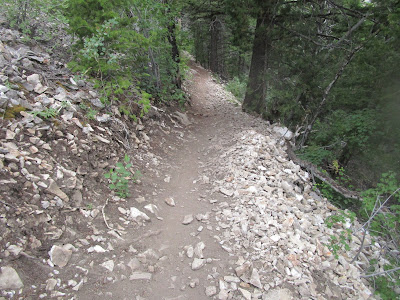 Still working on where we might bike and trek within the park, and enjoying the hours I spent roaming around trying to figure things out: 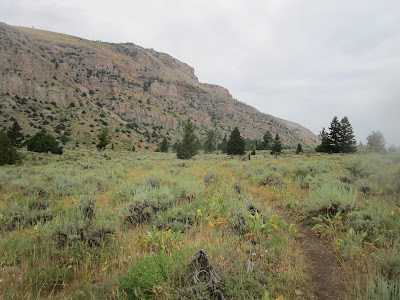 I have fond memories of Lander and look forward to coming back.  Which is good because we completely missed seeing our EcoChallenge teammate Darran who lives there (he's got a super-busy summer schedule and was away on a guiding trip) so we will certainly be back sometime to fix that!