Finally, my race report from Cameco Cowboy Tough in August!  Standard warning as for all my race reports, this will probably run long and have tons of details.  In this case, like the race itself, it will have multiple parts and take several days to write and read.

For anyone wanting a more readable and entertaining and much-more-reasonable length version, here's a link to the report by my teammate Dave:
https://docs.google.com/document/d/1j1vgd_Jc6KRf624UUTvRqJfuoP-GgwRFWxR_SLjVFWo

58 international adventure racing teams gathered at Teton Village near Jackson, WY for the start of the Cameco Cowboy Tough world championships - most of us had a long road to get here, but we were all excited to get started!

Knowing how excited we'd be, I asked the team if they wouldn't mind staying behind me for the opening rush to let me set a pace I thought I could sustain instead of dashing off up the hill and putting me into oxygen debt immediately.  We mostly succeeded, watching the majority of the teams dash away at the gun: 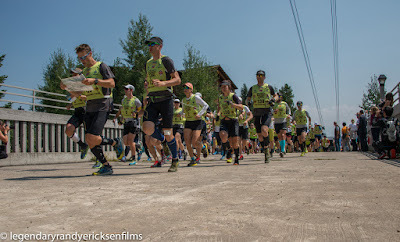 The ski area summer trails map, with our checkpoints labeled in red circles: 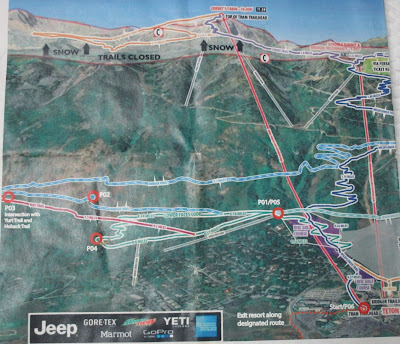 The Wildflower trail heading up the hill, a photo from my scouting days: 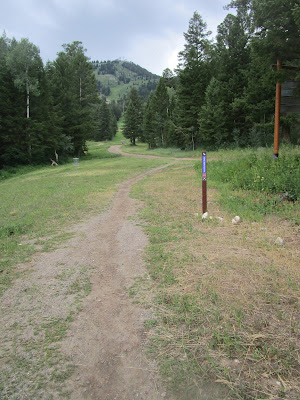 John hiked up to watch the mob come running up toward him: 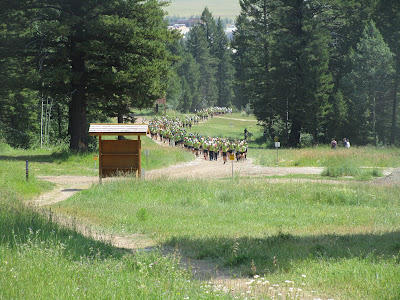 An uphill run is a good way to spread out the pack right away: 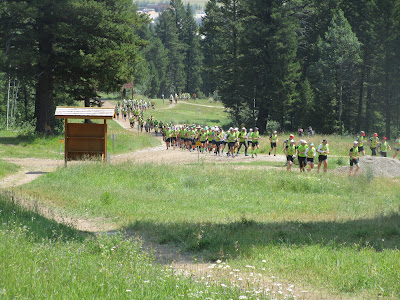 Differing ideas about whether to take the trail or the dirt road: 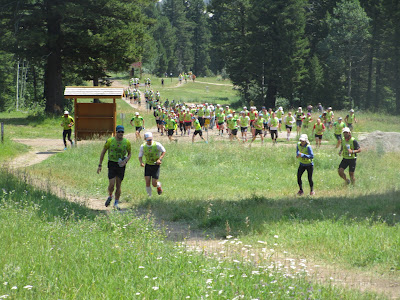 I wanted to take the trail, which was mostly just as direct, but eventually decided that that road must also be legal from the "stay on trails rule" standpoint, so we ran the road down on the way back.  Hi John, we're finally racing! 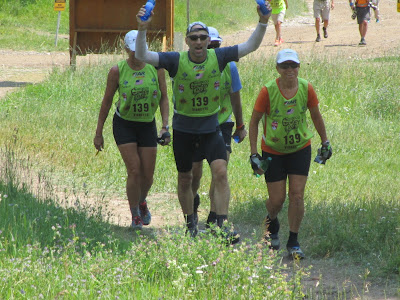 John had gotten permission from the race directors to follow us to various points on the course and take pictures, that was really cool: 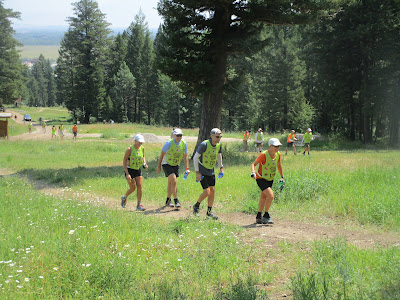 Making our way up the trail toward checkpoint P01: 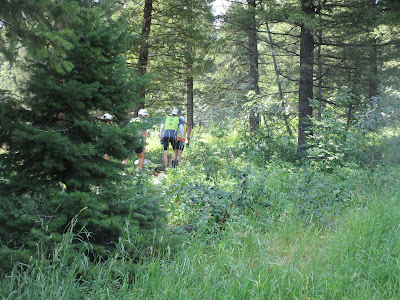 Soon we found the top of the small chairlift and our first checkpoint.  That was easy!  Time to jog on the flatter sections, following trails to make a CCW loop.  It looked like most teams had chosen this direction, which was nice because every team going the other way would have to come past us on a narrow trail.

We'd gotten some last-minute instructions on how to use the e-Punch to avoid multiple punches (and using up its capacity), so Leslie asked a couple questions to verify how it worked.  She wore it around her neck the whole race and we always knew it was safe with her.  It was great having real split times for an expedition race for once.

One checkpoint on the upper trail, one at the far end, then some downhill running along switchbacks to the last one in the loop.  We passed a couple teams along the way, so it was nice to know that we weren't last.

A bit more uphill hiking back to the top of the small chair lift, and then it was all downhill back to Teton Village.  It felt like we hiked/ran a solid pace, not too crazy.  And I made sure to catch the veer back onto singletrack at the end instead of missing that turn like I had during scouting.  Otherwise, the nav was easy.

John got a few pictures of teams returning at the end of leg 1: 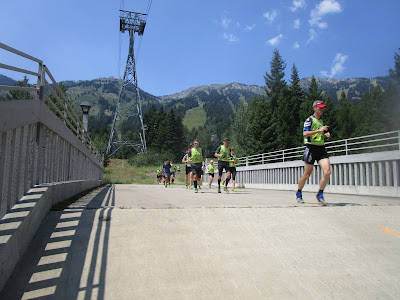 From the bus we had seen some wildfire smoke haze hanging over the Tetons, but it wasn't too bad, and the air quality got better as we moved east.  The sky looks pretty good from here - more racers returning to the starting line to collect their packs: 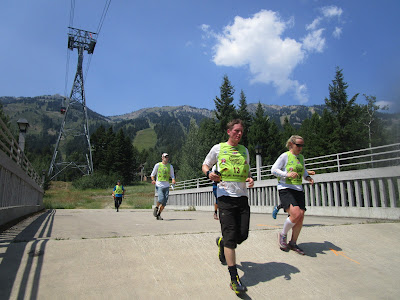 John tried to capture our team on video but missed, so you'll have to be content with a view of us walking away with our packs on: 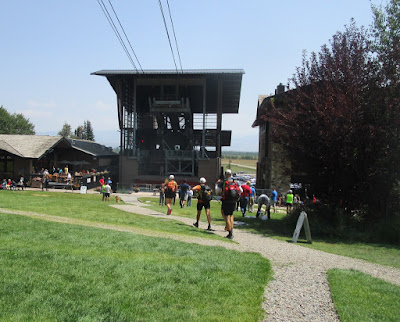 Leslie punched the P06 checkpoint and we jogged out of the Village toward the bike path: 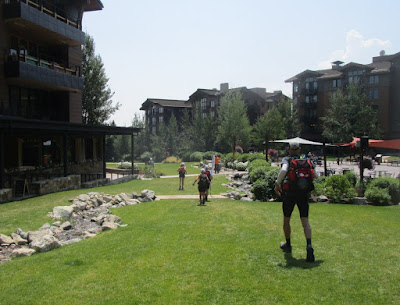 On the map we followed the dark line (the road/bikeway) from P06 to checkpoint 01/TA: 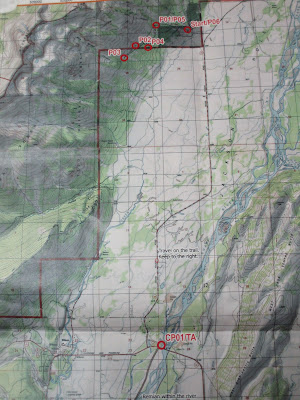 John trying to get a picture of us but mostly you can see that it was a nice day out: 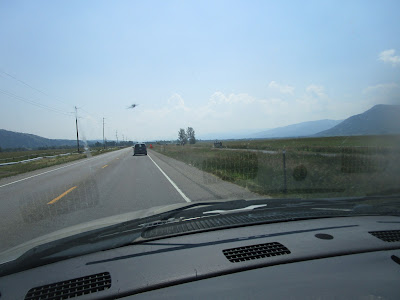 We set out at a solid jogging pace, certainly faster than I had expected, but I settled into it and was able to keep up if not talk much.  I wasn't really looking forward to this leg, figuring it to be rather tedious, but it went by quickly enough since we were running.  We got to meet a few teams (passing them, others passing us).  We'd take a walk break occasionally and I paused to drink Spiz a couple times.  Then back to jogging.  There were 1/2 mile markers so we could gauge our progress.

We were told to stay on the right, and most teams we saw were on the right half of the bike path, but apparently that wasn't good enough for a couple of cyclists.  One yelled some loud comments.  The craziest was a woman blaring a car horn on her bike - we didn't realize what it was (thought it was an actual car) until she rode past.  What the heck was that?

Happily, there were also plenty of pleasant people on the path, and even a few cheering us on.  And the rest of Wyoming was a lot friendlier!  And not as loud.

John drove down toward the river put-in and got some shots of the lead teams: 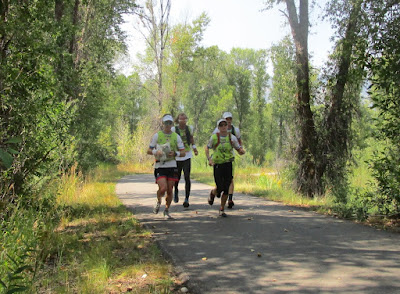 Eventually we showed up: 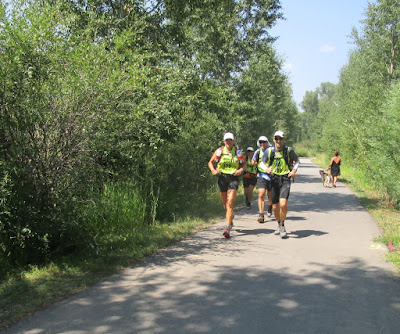 Almost done our 10 miles of running for the afternoon! 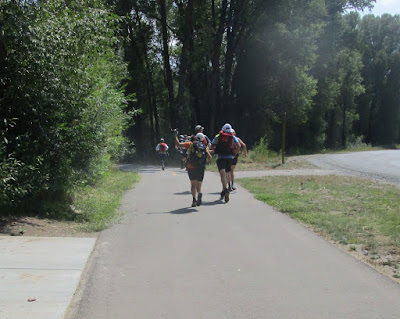 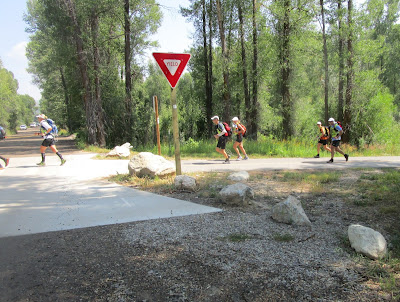