Loss of a friend

We are extremely saddened by the recent death of Dave Boyd. He was a doctor, adventure racer, mountain biker, and genuinely kind, caring, giving person. He fell while climbing in Colorado, and while he had a GPS device with emergency signaling, help could not get to him fast enough to save him. I have been thinking about him every day since we found out.

And I have been very much wanting to find his teammates from MOAT and hug them. I have a very hard time trying to imagine the loss of a teammate, so much so that I have to stop thinking about it. I am deeply sorry for their loss.

We are lucky to have had the chance to get to know Dave over the past year. He always took a genuine interest in our endeavors and wanted to know more. Although he was an incredible athlete and one of the best adventure racers Texas may ever see, you would not know it to talk with him. He was humble and friendly and made you feel good about yourself. I admire him greatly.

With apologies to Adventure World Magazine, here is a collection of photos of Dave and Team MOAT (#35) from Primal Quest 2008 from the online magazine and our camera: 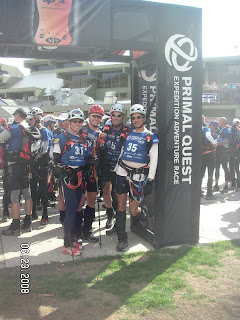 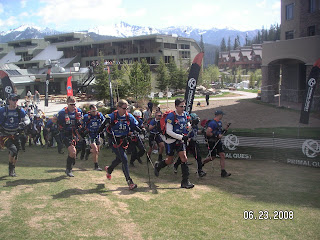 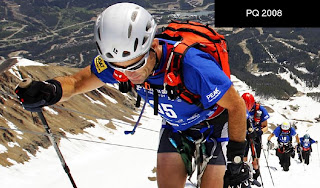 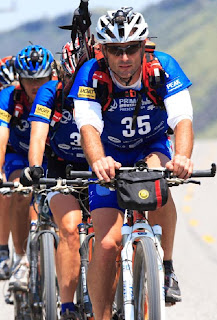 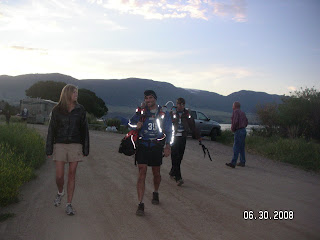 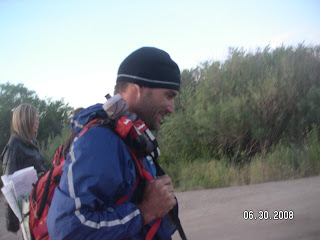 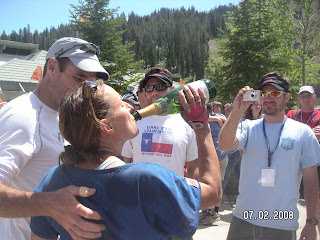 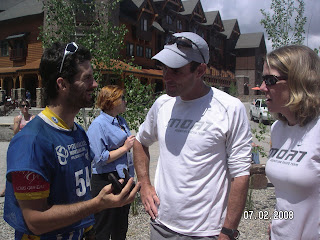 Dave, we cannot believe you are gone.
Posted by Marcy at 8:26 PM 1 comment:

Today we had a memorial service for Paunie, John's grandmother, who passed away earlier this month. It was a beautiful, touching, funny, tear-provoking service, and the church was full of family and friends there to share it. Everyone had wonderful stories to tell about an amazing woman who has touched many lives. 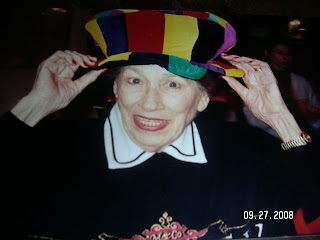 Can you pick out the future adventure racer in this photo? 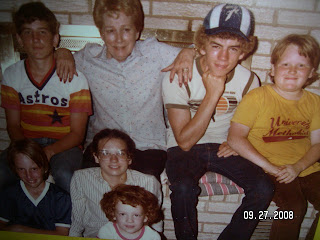 Back in the US, we are

It's always funny to fly into New York City and be greeted by a friendly customs officer with "Welcome home!" Someday we have to spend time in NYC.

We landed in Austin yesterday, stayed with Kip overnight, and now we're heading to East Texas for the weekend. A bit of The Daily Show, lunch at Fresh Choice, constant internet access. We're back!
Posted by Marcy at 11:27 AM No comments:

I haven't spent any time thinking about how to best make use of that cute little title I just thought up, c'est dommage. This is just a quick little update on where we've been over the past week...

We started by heading back to the Alps - how I miss the mountains again already. We saw some waterfalls and snowy peaks, then spent an afternoon doing via ferrata near Val d'Isere. John had a blast and I had a bit of fun on the easier stuff. But it's dang cold up in them thar hills, so we came back down and drove to Grenoble for a brief visit.

There we finally got to see Nico (Marion's husband, who we didn't get to see before the race) and their son Leo again (adorable child!). We also made a surprise visit at the farm of Marc Sinibaldi, our orienteering club leader, and it was great to chat with him and his wife again. We also spent some time watching parapentes since it was the weekend of the Coupe Icare festival.

Next we drove up to Dijon, which we had heard about but never visited. It is an adorable town with a lot packed into a small area. We were there during the "Weekend de Patrimonie" so many things were free to get into. We spent time in the fine arts museum, climbed the tour to see over the city, and browsed the mustard store.

We're currently spending our last couple European days (at least for 2008) in Strasbourg. This city sounds French but looks German, an interesting combination. There are lots of interesting churches, buildings, and museums here, including the Tomi Ungerer illustration museum where we spent a couple hours this afternoon. The Cathedral and its astronomical clock are also quite amazing.

I've got photos but no camera cable with me right now, so that will have to happen later.

On Wednesday we'll head back to Geneva and stay the night before flying home on Thursday. It has been a pleasant, relaxing week and I have slept enough for the next two months...

Run to the sea

We completed the 14-day stage race called La Grande Traversee des Alpes last Saturday. It is quite amazing to actually be done - me with a complete finish of all stages for the first time (yay!) and John in second place (one better than last time). Many things were better than last time, from our preparation to the race organization. All the other runners were incredibly nice and we got to know many of them well.

I had a variety of small goals along the way towards the big goal of getting from Thonon-les-Bains at Lac Leman to Menton on the Mediterranean Sea on foot. My first goal was to finish stage 3 without being exhausted. This required starting conservatively, although my finish times were still faster than last time. I figured Sylvie, a strong woman runner, would remain faster than me for the whole race unless she had problems. But on day 4 when I determined for certain that I wasn't exhausted, I stopped reigning myself in and allowed my body to go uphill as fast as felt comfortable. I still took it easy the downhills to try to save my knees. Somehow I finished ahead of Sylvie, and from them on I gained time on her until the end. All I had to do on the last day was finish without a catastrophe, and I managed that, so I ended up winning the women's race (out of 6 women originally signed up for the whole 14 days). Fancy that!

John ran great, faster than last time while also taking it easy on the downhills. He had no knee trouble, no problems getting sick, basically enjoying himself and working hard on the uphills. It was clear from early on that Laurent was faster overall, but due in large part to his agressive downhilling style (John usually beat Laurent to the top of the first climb but then followed him the rest of the day). Both of them were well ahead of the rest of the field, and John was content to stay in second place until the end.

On the last day, it was quite cold at the start, so John took off fast in order to warm up. He felt great, so he just kept running hard, including down the hills. He passed me really early in the day looking great, finishing strong a couple hours later. Laurent passed me on an uphill, but then he appeared again further along in the course. This I didn't understand, and I thought he might have gotten lost (the area where I saw him again had some confusing trail intersections), until topping out at the last col. Starting down the final 1000-meter descent to Menton, Laurent was below me going downhill backwards and in obvious pain. He had injured a quad and couldn't go downhill normally, but he was trying the best he could manage to get to the finish line.

I worked my way down to him, gave him 2 ibuprofen pills, then continued on to the finish. His two-hour lead over John had nearly evaporated, but somehow he got himself down that mountain backwards as fast as humanly possible. Laurent won overall by 11 minutes and 11 seconds, and it was quite a suspenseful finish!

I'll work on more of a story but that will take quite a bit of time. For now we're in Geneva with a rental car, working on plans for the next week. Maybe we'll go back to the Alps for a bit (without running in them, to be sure), maybe we'll head toward Dijon and Nancy to the west. We fly home to Austin next Thursday Sept 25, at which point I'll have more internet time to post photos and stories.

Thanks for everyone's great comments and encouragement! I am SO excited to have finished the GTA - a 2-year project, really. It was an amazing experience, I'm very glad we came back to run it, and now it's a relief that it's over :)

Ciao until perhaps next week!