Random stuff from Maui - and Lana'i

Besides doing boring things like working and preparing for upcoming blog-worthy travel, the exciting stuff has not lent itself to bringing a camera along.

'Cause we've been in the ocean a few times, and the camera is ocean-shy.  I haven't been motivated to get a waterproof version.  So here's a bit of text-only reporting.

John recently suggested that we should take advantage of the fact that the water is warm here, and get some experience with ocean waves and surf.  This is in response to us signing up for Primal Quest 2017 - wait what? - an expedition race on the schedule? - well, that's a big kick in the butt to start doing some non-running training.

Without our bikes here, but with plenty of water around (did I mention that it's warm water?), it only makes sense to get out and play around.

The adventures of the past month:

1) Surfing with the outrigger canoe - so cool!  I guess now that there aren't any whales to watch (they have all departed for cooler climates), the canoe club has decided to have some fun with the waves.  We hang out while the captain watches for slight rises in the ocean (very hard for me to spot), then we paddle hard until the boat picks up speed all on its own with a wave chasing the back end.  Then we glide in and laugh at how crazy this idea is (or at least I do, until I get used to the concept)!

2) Kayaking - and surfing with a kayak.  Some actual PQ training in a 2-person sit-on-top, paddling down the shoreline and looking for places to snorkel.  Our first go was on a rather windy day, so the snorkeling was a bit of a challenge (with one of us staying on the kayak at all times so we didn't lose it).  A good way to get to more remote reefs, in calmer weather.

The highlight was going back to the launch beach and figuring out if we could surf the thing.  John did great watching the waves form and deciding when to start paddling (easier to see than with the outrigger because you can be closer to them) and we were almost always able to "catch a wave" and ride it in.  The challenge was trying to steer to keep it going straight instead of turning sideways and rolling off.  There was lots of laughing involved in the process.  We both came off the boat one time, and during another I managed to stay on but John wasn't with me anymore so I got to practice steering from the front of the kayak.  All-around good training and I'm getting less intimidated by small breaking waves.

3) Snorkeling - with turtles!  We finally hit a calm day and swam from a great beach to find a wonderful little reef with beautiful, colorful fish.  Then John pointed to the sea turtle that was just hanging out underwater.  So awesome!  There were several around and they just kind of look at you and continue doing their own thing, much more graceful in the water than on land.  I love love love swimming with turtles.

4) Surf lessons - and a cut foot.  We still haven't gotten John on a board yet, but we will!  I think he will really enjoy it, especially with his experience in snowboarding and now he's gotten good at reading the waves.  I took a lesson to see what I could learn, and it went about as well as I could have expected.

Paddling around with my arms while lying on the board was great fun, I could probably do that all day (well, at least until those upper back/shoulder muscles gave out).  My instructor was very helpful in giving me starting directions and getting the wave timing right.  I eventually managed the "push up, knees on the board, one foot on the board" part pretty smoothly.  It's the next "stand up" action that eludes me most of the time, but I think I could get it with a lot more practice.  I kind of like the kneeling part, so I'm not sure my motivation is quite high enough to progress very far.

I did stand up several times, managed a few wobbly rides as the waves died out toward shore, and got at least a sense of what it was about.  My last couple rides were even half decent, or at least my instructor was really encouraging about it all.

The main "oopsy" was once when I fell off I hit the top of my foot on a piece of coral and got a nice little gash.  A couple stitches and a few days off from running, and it's almost back to normal.  A scar to add to my "memory collection"!

Besides our watersports fun, the other tidbit of news is that John has been working on Lana'i for several weeks.  Neat that he has been able to experience a whole 'nother Hawaiian island.

Some pictures from John - thanks John for adding some color to this blog post!

On the ferry over the Lana'i: 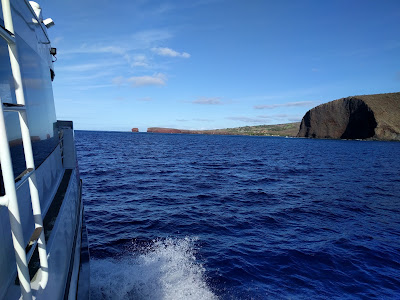 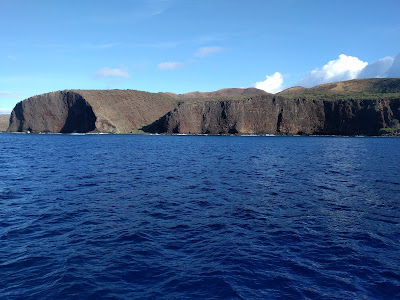 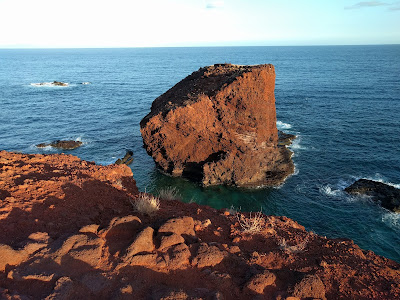 Coming back toward Maui, with the west Maui mountains (and a big notch) in the foreground and Haleakala in the clouds back to the right: 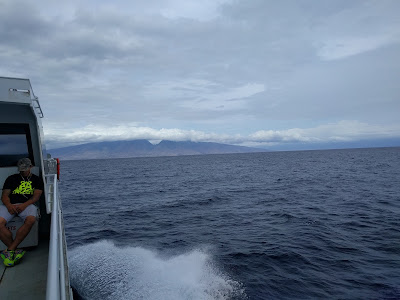 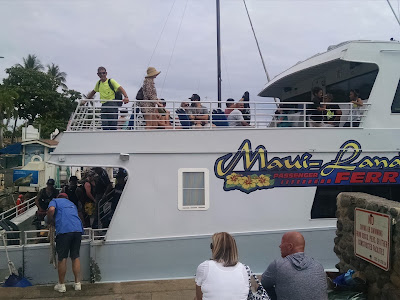 It happened to be Lahaina Second Friday + Art Night a couple hours after John landed, so we decided to check it out for the first time.  This is the closest to what we know as "Art Night' on Maui, with a ton of really neat galleries to explore.  Many had the actual artist there, even some who were painting as we watched.  Also live music, food and drinks, people strolling up and down the street.  We didn't quite make it all the way through this long list, but we enjoyed everything we saw: 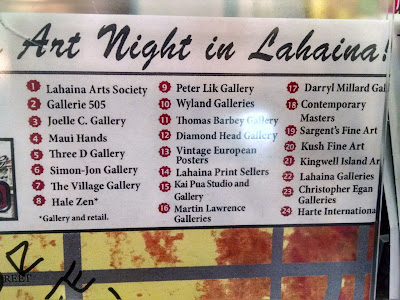 On a different weekend, we checked out the Maui Brewing Company's brew pub and had an excellent lunch - we're really starting to dig brew pub food these days, many are surprisingly good places to eat.  We enjoyed the fun local beer names and I liked the samples I tried (I like when I can order a flight with several small tasting glasses). 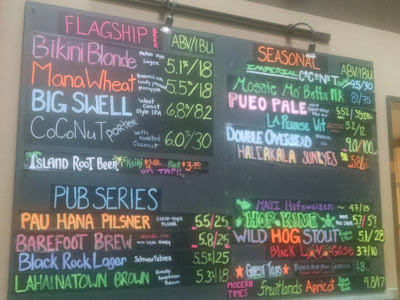 And finally, a brief mention of the amazing food that grows in the yard where we are living.  Our hosts have focused on growing an "edible garden" and we are constantly amazed at what different item is ripe each month.  So far from the garden we have eaten lilikoi (passion fruit - still my favorite), star fruit, coconut water and meat, New Zealand spinach, curly head and lacinato kale, apple bananas (now my preference over "normal" bananas), and the latest is papaya.  I didn't think I cared much for papaya when we tried it from the store, but straight off the tree?  Sweet and yummy!

Couldn't wait for John to get home before I ate my half... 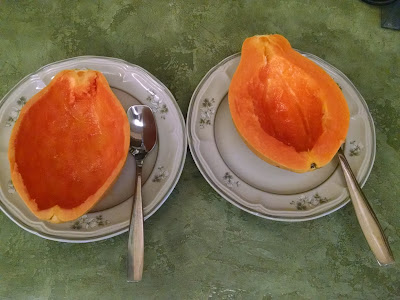 So that's the random Maui blog post of the month!