I have finally finished all my pending race reports!

Happy Thanksgiving, everyone!
Posted by Marcy at 6:08 AM No comments:

The Beards in print

There is an article in the November/December 2009 issue of "Inside Texas Running" magazine about us, courtesy of Joe Prusaitis. I scanned it and put a copy on my web page:

Pretty funny to see our photos and bio in print!
Posted by Marcy at 12:07 PM 1 comment:

It's only slightly late, but we have finally finished a couple race reports from GUR NOLA: 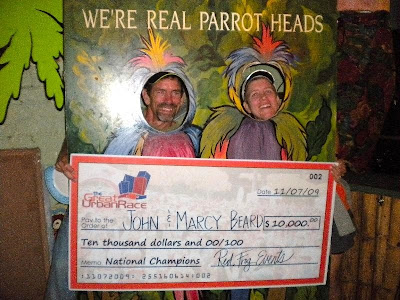 Last Saturday we had our last of 3 national championship races in 4 weeks. Phew, that was a lot of racing!

Again, I have plans to write a real race report soon. Until then, here are some photos from the morning race: 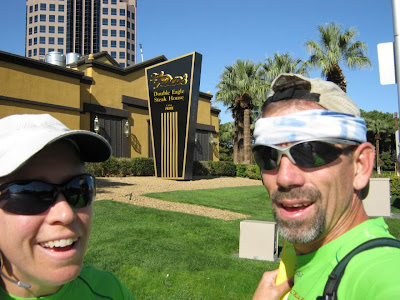 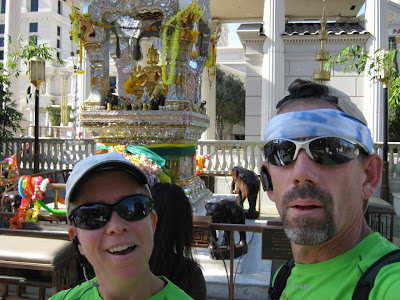 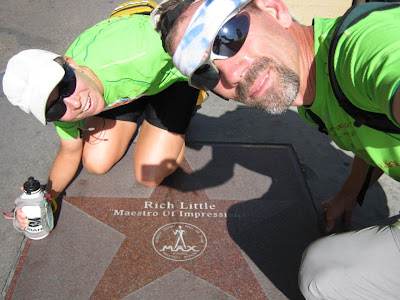 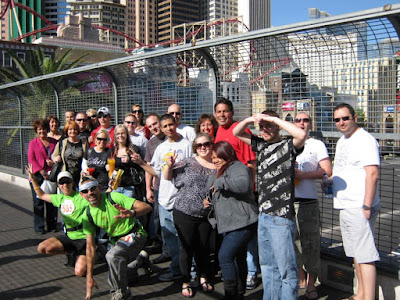 The first race went great. We ran from the Miracle Mile shops (the start/finish) out to UNLV, up to Fashion Show Mall, and along the Strip to New York, New York and back. Along the way, we bargained with a shop owner for 10 1-dollar bills with an "L" or a "V" in the serial number. We also got a photo with 20 people on a pedestrian walkway.

We ran back into Miracle Mile, just behind Kip and Dave for second place. All five of our Austin teams made the 10-person finals race. Congrats to our whole group! Then it was time to recharge the phones, eat a quick lunch, and get back there for the finals.

Photos from the second race: 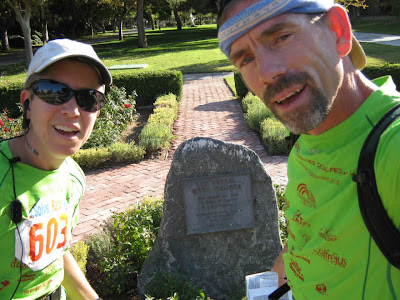 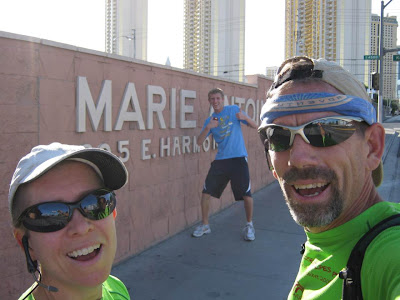 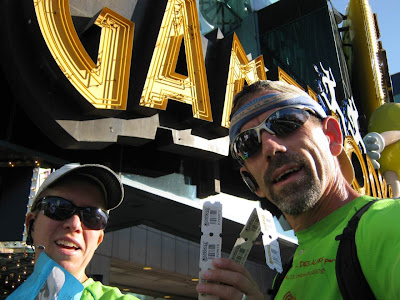 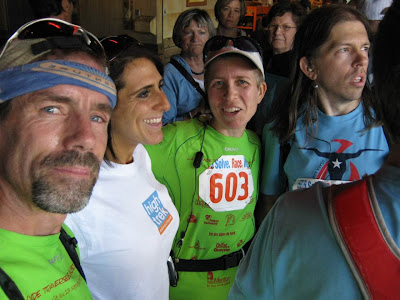 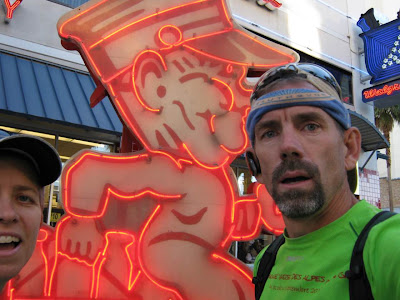 We had a local cross-country runner tag-along named Kyle. Each team had a tag-along, apparently to ensure that no one cheated. Sounds good to me! Kyle was fun, and he was definitely fast enough to stay with (or way ahead) of us. He appears in the Marie Antoinette shot, above :)

The first half of the second race again went to UNLV and back, plus a stop in Game Works to play skeeball (which was fun once we got the stupid card to work in the machine). Then we headed to Margaritaville to locate a woman who had our second set of clues. Time to head downtown! It was a long bus ride with a bunch of other teams who had caught up while waiting for the bus. Then a quick run through downtown, and back on another bus.

We got (stupidly) lucky on our bus route choice back. The buses seemed to all be on detour routes through downtown, and the one we tried to catch actually turned out to be a different bus going down a different street than normal. But somehow we managed to get on the fastest bus back to the finish. That was a huge break.

We crossed the finish line first - but wait! There was one final challenge, a 60-question crossword puzzle based on the Ocean's 11-13 movies, UNLV school colors, names of casinos, and the cities HTA has held races in this year. Basically a trivia quiz, with no help from other teams or people at home. So you either knew it or you didn't, in many cases. Each wrong answer was a 5-minute penalty. We did our best, but we obviously didn't have the right info in our brains because it wasn't good enough to hold onto our lead and we ended up in 3rd. Bummer.

John's knee mostly held up, although he was limping again by the end of the day (I ask again, how can someone limp faster than I can run?). We pushed hard, raced well, and were very pleased with our urban racing performance. Trivia questions... not so much. But that's how it goes sometimes!
Posted by Marcy at 1:00 PM No comments:

John and I raced in the Great Urban Race championships in New Orleans last Saturday. What a day! We talked about taking it easy because John's knee is still in question. So I figured I'd have a relatively easy time keeping up - not even! He would have left me in the dust (we didn't trust his knee enough to bring a tow rope) but he kept a slower pace so I could keep up. And there was much heavy breathing...

Anyway, we went into the race with a good attitude - let's just have fun, see what we (and John's knee) can do, and just try our best. I think it helped me from being too serious/focused/whatever it is that is causing me to yell at John during our urban races. We worked together well, had a good plan, had an awesome crew helping us out, and had a LOT of fun.

I'll get a real race report written after this next weekend's race. But for now, here are some photos...

In the morning race, I spotted this checkpoint on the Tulane campus - thank goodness, because it was a tough clue to find online: 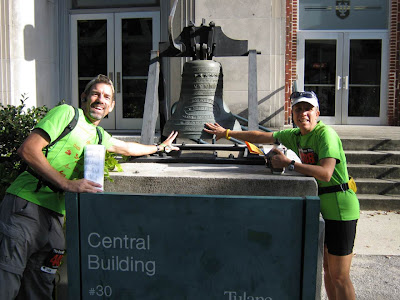 I offered John a piggyback, but he was feeling good enough to pick me up (the instructions on the sign were to have one teammate piggyback the other and get a photo with one of our race numbers visible): 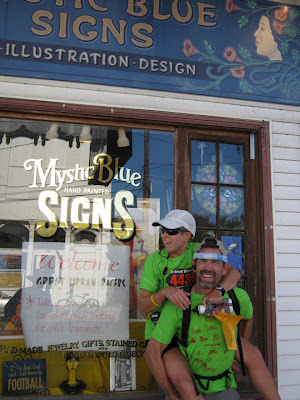 The best part - riding Cruisers around town! Here's us at Lee Circle for our CP5 photo: 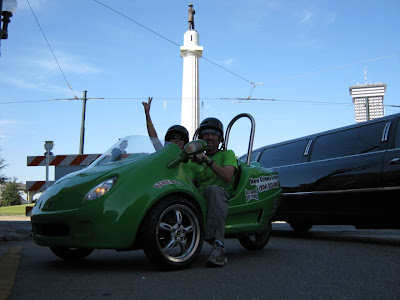 Molly A Market with the correct # of fingers (also known as the "Waffle House Salute"): 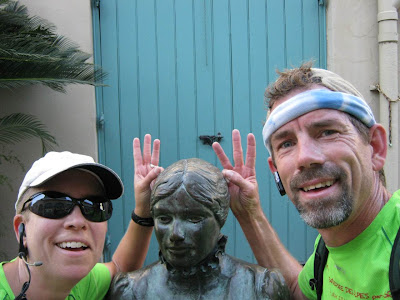 Us with the horse and the cathedral and a clock: 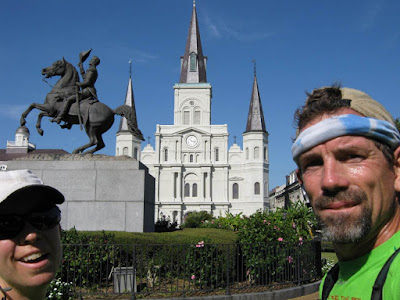 In the finals race, with a statue of a previous governor, doing the Charlie's Angels thing: 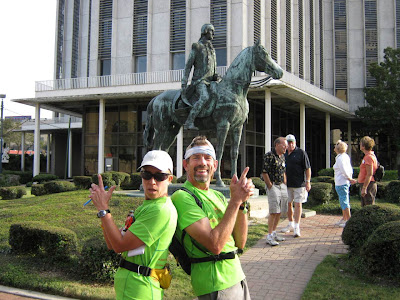 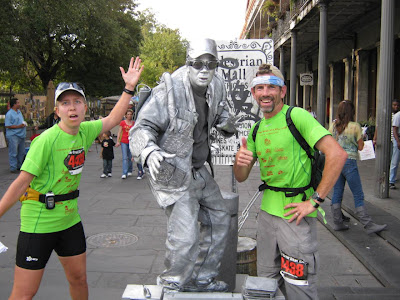 Well, there's a lot more to the story, but I'll finish for now with a summary:

Morning race = longer than expected, rode a trolley to Tulane, did a word search, tried to find a CP in chalk on the sidewalk (skipped that CP, as we were allowed one skip), donated money to St Jude's charity, did a charades problem (my friend Kathy thinks more like I do than John does, let's just put it that way), and finished up by carrying a real LIVE and pretty pissed off alligator around a room (OMG!)... came across the line in around 2.5 hours and were stunned to learn we were the first ones back. All photos good = yay! Many teams finished right after us, including Kip and Dave who also made the top 8 for the finals race.

Finals race = interesting time management challenge with a race cut-off of 2.5 hours and a lot to do; started at City Park, assembled a Lego racecar, did a logic problem and guessed correctly which pretty much saved our race, paddled row boats on the lake, rode a trolley back downtown. Then ran out to the Garden District, found a fake flower among a bunch of real ones, found and played a 45 record, did a smell test to identify 5 scents, skipped the pie-eating challenge (thank goodness), headed back to the French Quarter. Started running low on time... rode a mechical orca whale (??!!) and barely hung on sideways for 7 seconds, and finished by building 30 paper boats with about 20 minutes to go. Somehow managed all 30 boats and ran back to the finish line with 5 minutes to spare before the cutoff time. We were the first team back with all points (except the one allowed skip point) completed - so we won!

That was too amazing - perhaps the closest finish in an urban race championships ever?

Thank you to everyone who helped and cheered us on from New Orleans and from afar!
Posted by Marcy at 12:20 PM No comments:

Last night Jason hosted a dinner party/murder mystery. We weren't required to come in costume, but it was the perfect night for it (when else can you shop for interesting dresses at Goodwill? Actually, I don't really know the answer to that question...) and everyone came in character. Good food, good company, good fun! 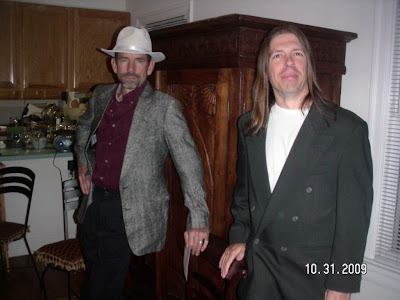 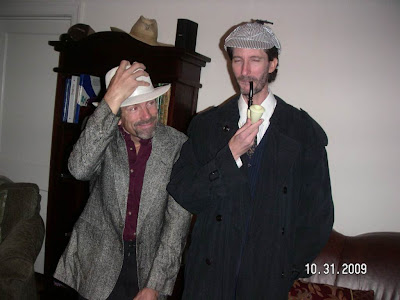 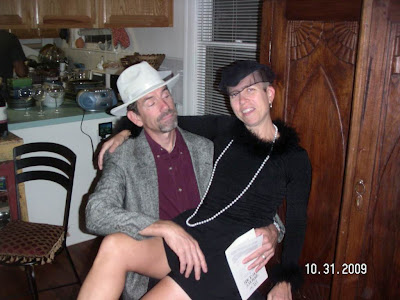 A gang of, well, something: 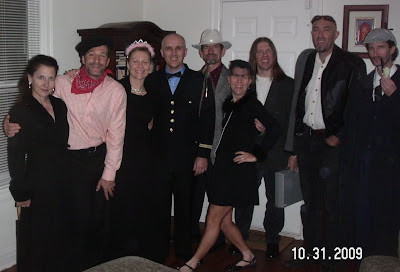