I've been waiting for a chance to try this FKT up in the hills above Flagstaff.  It took some additional planning and mapping, we were distracted by other adventures last fall, and then it snowed.  I expect there were fairly deep drifts up in the Elden bowl over the winter.  The topo maps would have to wait a few months.

Then it got warm, the snow melted quickly, my training and mileage improved, and it was finally time to see what it was like to roam around off-trail in the ponderosas at 8000-9000 feet.

Jason Henrie ran and posted this FKT concept in 2015, but no one has taken him up on it until now.  It seemed like a great opportunity to explore, see what obstacles we might encounter, and set a "reasonable" standard for future adventurers.

Also a good distance and something fun for John - I was psyched to have his company.  Not only that, but a couple friends were interested in joining us.  They are training for their first ultra race next month, and this fit nicely into their ramp-up schedule.  Super cool!

We gathered at the Sunset Trail parking lot for the first of many group selfies - meet Taylor, Andrew, and their running dog Basil: 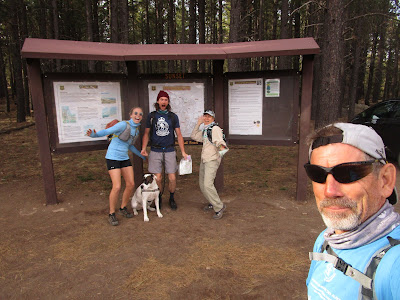 I love "open course" FKT's that include navigation.  An orienteering challenge, except without the control flags.
We trotted down the first road and soon were climbing straight up the side of hill #1 ("8503" on the map, meaning it didn't have a name, just an elevation).  That was quite a warm-up!  Happily the terrain leveled out along the upper ridge and soon we had summited the rock at the top: 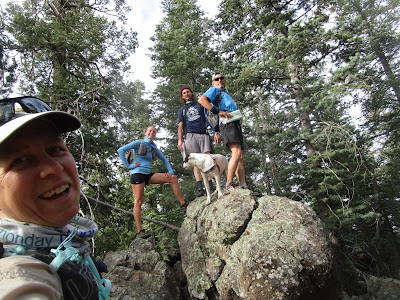 Andrew followed along on the map and he and John led the way to the next hill, #8460.  Now that we were in the general Dry Lake Hills area, it wasn't such an effort to reach the top.
Great view of the San Francisco Peaks from here: 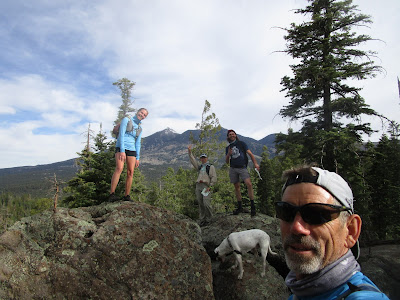 What a lovely day for a group trek!  Some clouds and breezes to keep it from getting too hot, overall very pleasant.  Basil seemed to appreciate it too, keeping puppy pep going all day.  Most impressive dog.
We're hitting the goals fast and furious now - here's the rock on top of hill 3, #8549.  We were pleasantly surprised to find obvious high spots (with obvious rock features) at the top of most of the hills, instead of having to roam around trying to guess: 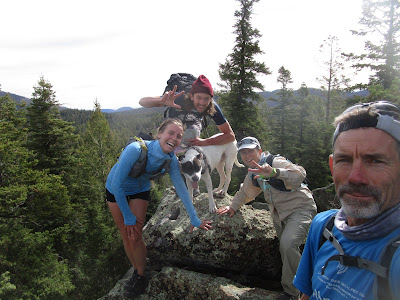 One of the two dry lakes in the area (we made a big circle around the other big one to the east).  We were having a grand time with the route finding and roaming: 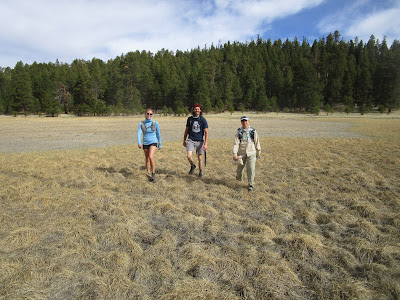 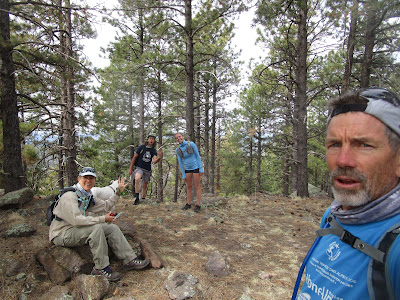 Hi John!  Thanks for the funny face :) 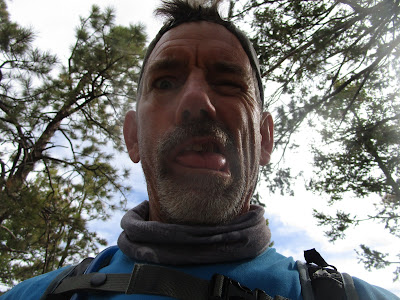 All the way over to #8402, which overlooks town but doesn't have a good view of it: 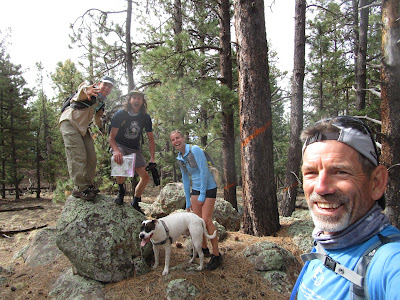 John took us on a nice traversing path around to the little road and I led us to the spur that climbed up to our 6th hill, another #8549.  We opted to climb the big rocks just south of the boundary marker, because why not.  Hello from up high! 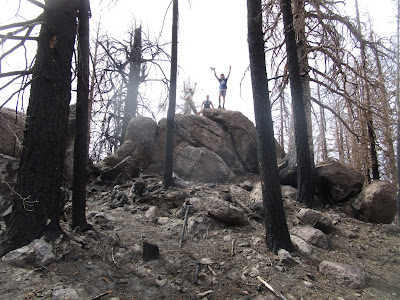 We also walked over to the actual (probably) high point just north of the marker, but that was more boring.
One of the burned-out root systems from the fire several years ago.  They make interesting patterns in the sandy soil, almost like dinosaur footprints with toes where the larger root offshoots used to be: 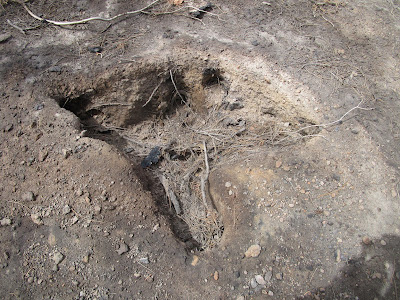 Heading down through a previous burn area.  I'd expected Basil to come out covered in soot, but he seemed to shed every bit of dirt he ambled through (although I wasn't the one who had to wash him later): 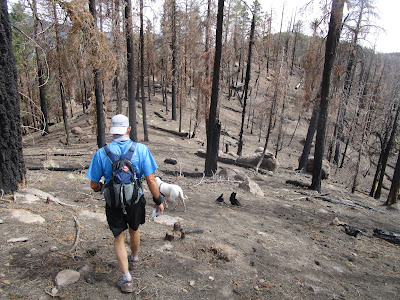 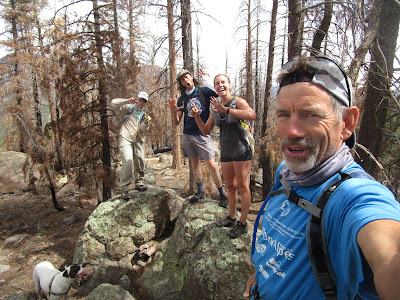 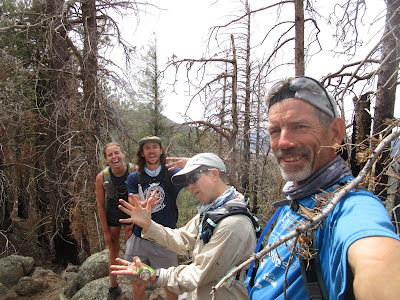 Hey, there's a view of town: 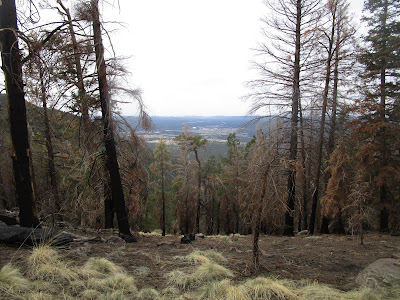 We climbed down to Brookbank trail, found the intersection with Sunset, and started a longer trail/road section to work around to the Elden side of things.
View of Elden from the top of Heart trail: 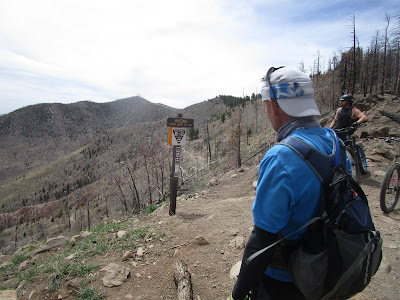 We jumped on the road over to the Turkey Park area, cutting up to the antenna towers at Devils Head: 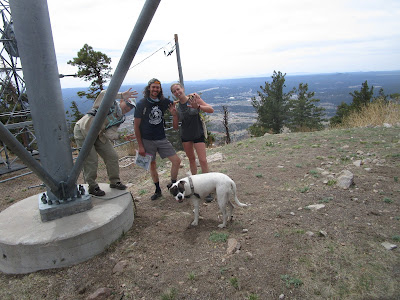 I noticed that the InReach Mini mileage had jumped several miles more than expected - it had read one tracking point in the wrong spot.  Not only over in town, but 16,000 feet in the air!  I delete that point from the track later so as not to give any wrong impressions about our flying ability.
Wow, did it ever get windy all of a sudden!  We fought some gusts on the way to the highpoint of the day on top of Elden Mountain.  Number 10! 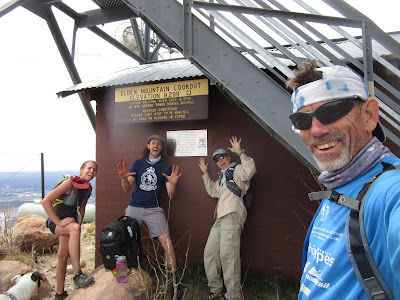 That was a good spot to sit for lunch, out of the wind.  John retrieved a water gallon he had previously stashed as our resupply, thank you John!  Basil got plenty of food and water too, and we were all rejuvenated.  Only two hills to go...
Coming into this, I had been most curious about Little Elden Mountain.  From a distance it looks rocky and somewhat challenging.  For sure, the off-trail section along the ridge was slower than the rest of the course, but without any problems.  Just a bit of clambering over/under trees and through some boulders.  It was more tree-covered than I had imagined.
When we reached a possible high spot, I pulled out the Gaia map to verify that yes, we were in the right place and didn't need to continue along the ridge.  And hey, that giant pile of boulders looks really interesting.  Obviously we needed to try to "top out" over there.
This turned out to be the most entertaining part of the day.  First we scrambled through the middle of the rocks, finding a "canyon" that divided two sections: 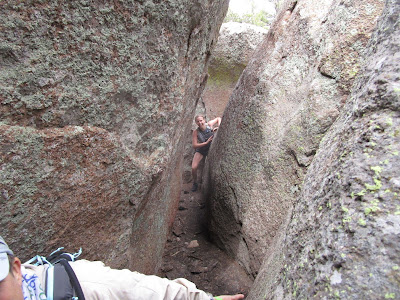 Above us, Andrew located the highest point and John gave me a hand-up assist as we converged on this spot.  And there was a summit register in a little glass jar, how cool!  First, hill #11 selfie: 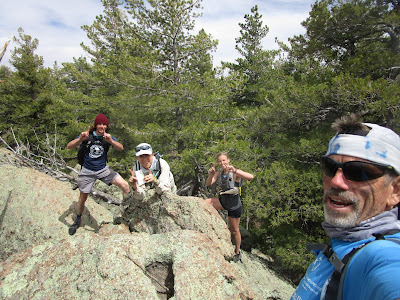 The register was placed in 1988, the first entry was in 1994, and there were not many after that, maybe another 10 or so.  We were thrilled to be one of the few to find it: 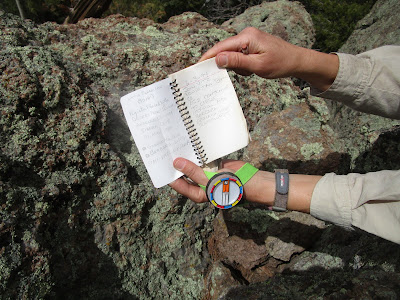 Of course I had to make a note of our presence: 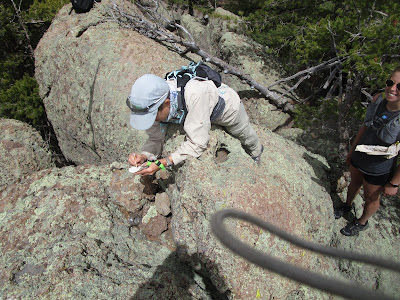 Basil even joined in the fun, not content to wait for us down below.  This dog is quite the rock hopper! 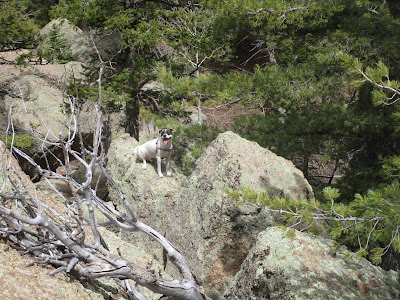 We were having such an entertaining time on Little Elden that I forgot to hit the "I'm OK" message on the tracker.  Ah well, our track definitely shows us at the right location, couldn't miss that one.
After slithering, jumping, and scrambling back down... thank you Little Elden! 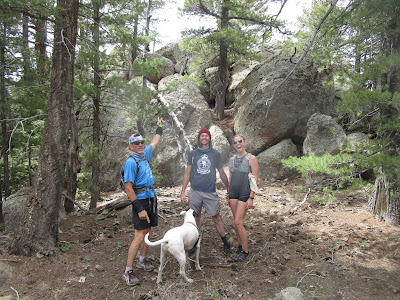 One last challenge - how to get off the mountain?  We had seen some big boulders in this area when we were coming over on Sunset trail and it wasn't clear just how easy the descent would be.  In retrospect, it might be faster (depending on a person's bouldering speed) to backtrack another 500 meters before dropping to the trail.  But definitely less entertaining.
There was some hemming, hawing, and squeezing through rocks action: 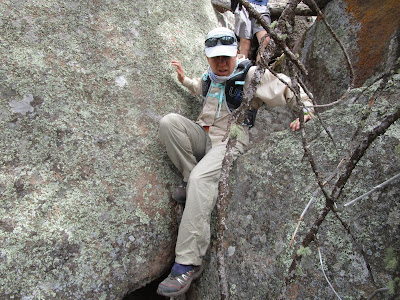 Eventually we reached the bottom, back at the saddle at the top of Little Bear trail: 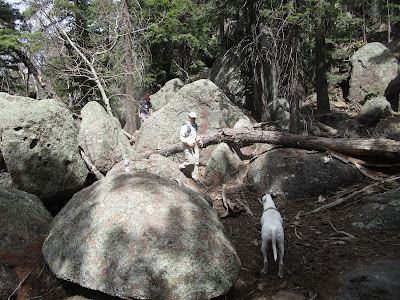 One more climb!  Perhaps it would have been less effort to take the trail around, but instead we charged straight up #8843.  In any case, we made it, hill 12 out of 12 complete: 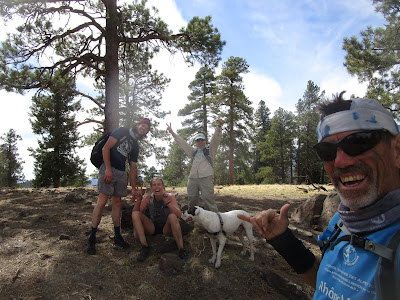 There's a nice view of O'Leary from here: 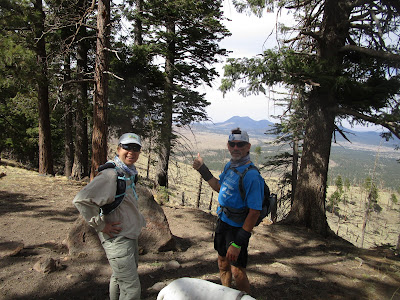 A couple miles down the trail and we were back at our cars: 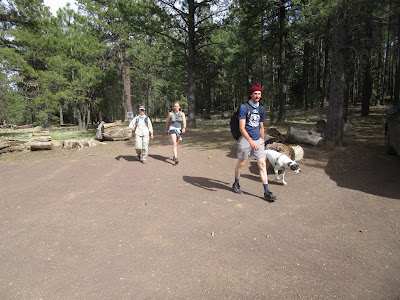 Well done everyone, especially the aspiring ultrarunners and most especially Basil the Wonder Dog! 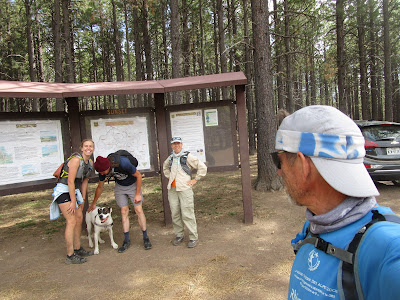