In November I signed up for a "mileage challenge" with a large group of folks, many of them Austin paddlers, but also people from all over the US and athletes doing various disciplines.  There were conversions for swimming (1:4), mountain biking (2:1) and road biking (3:1).  The main goal was to reach 100 miles between Thanksgiving and Christmas.  We joined some friends as "Team Vignette" to have our average miles compared to other groups as a friendly competition.

Because, yeah, a mileage challenge for me is always about competition, and it's highly motivating for me for some reason.  I start planning every day around maximizing miles, it gets addicting, and by the end it gets a little crazy.  But it's excellent training and all in good fun  :)

Other motivation = the food we ate for Thanksgiving: 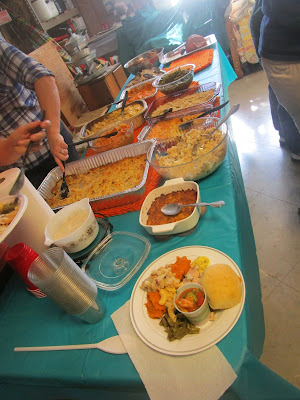 The first day, being Thanksgiving with family and all that, was light - hill repeats at the Beard Farm.  The next day I started in earnest with a long run around Tyler.

Some photos from that run, including one for our nephew David: 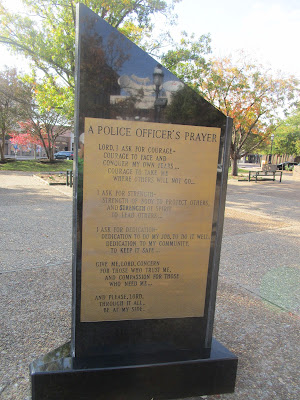 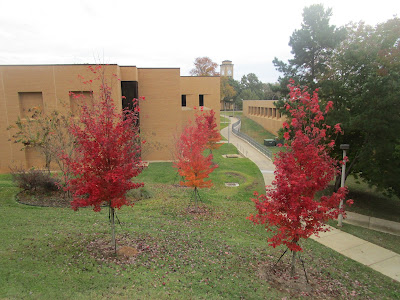 And my favorite picture of the day, the "East Texas Watch Dog": 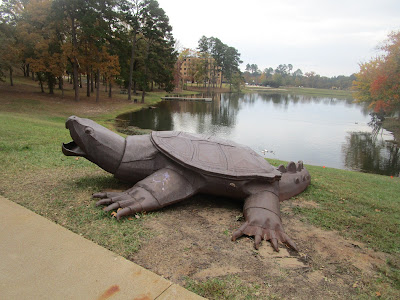 The next week involved running at the track, riding in Tyler, two big loops on foot at Tyler State Park, and riding & running on the fast trails at Faulkner.  I also discovered Lindsey Park and it is now my favorite place to ride, 13 miles of fun singletrack.

It soon became clear that having a choice between running and riding a bike was very helpful.  Running was a bit more efficient (usually) and easier to do in cold weather, while riding was easier on my legs and a nice way to run errands around town and see more things.

The next weekend I ran 51 miles at the 12-hour Circus race at McKinney Roughs.  Lots of rain and mud and lots of work, but it was an excellent and memorable challenge.  On the other hand, between tapering for and recovering from the race, my daily mileage average for that weekend wasn't anything special.

I didn't expect to drop off the blogosphere at that point, but a couple things happened that took away my time and energy after that.

Next up was the last week we were stationed in Tyler.  I went back to Lindsey a couple times and rode around Tyler (including stopping at Einstein's for a bagel) a couple times.

We moved to Austin (hello Austin!) and immediately drove away.  We found our friend Art at Brazos Bend State Park, in the middle of running his first 100-mile race.  Go Art go!  John and I took turns pacing him during the night and enjoyed the company and seeing the trails along the swamps in the dark.  Art went on to finish strong the next morning, congratulations!

I, however, couldn't hold up my part of the pacing duties.  In the middle of the night I came down with a stomach issue - not sure if it was food poisoning or a bug, either way it knocked me flat.  Hate to be graphic, but stuff was coming out from both ends for a while.  Yuck.  Thank goodness no one around me was inflicted.

That took me out for about 4 days as my stomach (and appetite and energy) slowly recovered.  Setback for the mileage challenge.  But a bonus loss of 3-4 pounds.  Not a recommended diet plan.

I ramped back up slowly, started feeling better, and started exploring Austin.  I discovered that Bruegger's Bagels in Westlake is reachable from Town Lake with only a couple hills in between, yay! 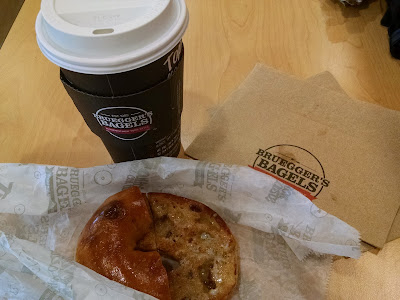 That started a trend of taking pictures of what I was eating in the middle of workouts.  Yay, my appetite was back!  Hope you aren't hungry while reading this.

But first, more training.  Some Hill of Life repeats (great for climbing practice).  Riding over to McKinney Falls to find out that I have close access to those trails (excellent).  Then a long ride around Austin.

Some photos from that ride - up to Mount Bonnell: 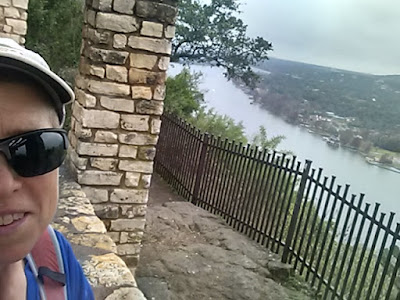 I hadn't been here since this was added at the bottom of the stairs: 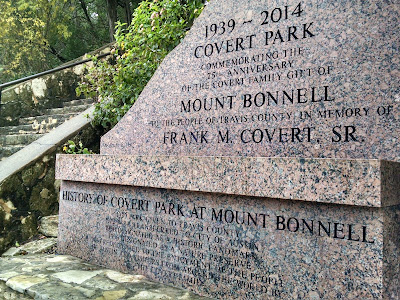 An excellent Christmas Duck on Mesa Drive (my favorite holiday decoration perhaps ever): 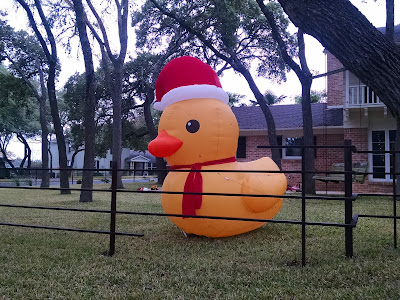 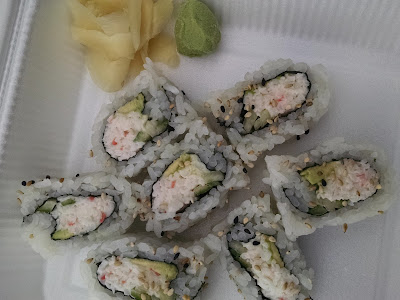 View from my lunch spot: 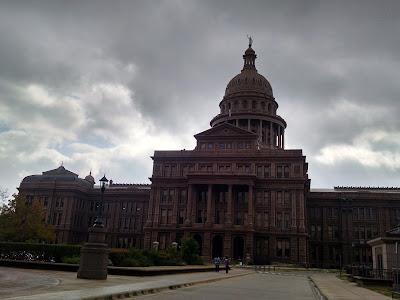 The really-cool graffiti park that is way bigger than I expected, wow, that's awesome: 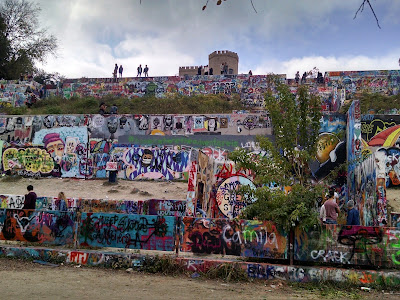 I stopped here A LOT - love that TJ's is now in downtown Austin, right off the hike and bike trail.  And my customary mid-workout snack (I'm working on reducing sugar intake, but make an exception for riding/running fueling): 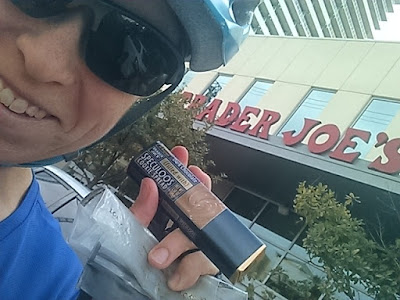 My timing heading home was perfect - I managed to catch the World Championship Beer Mile going on in the Statesman parking lot.  Ridiculous, amazing, and geez, these are some fast runners doing this now.  The leader, downing a mid-race beer: 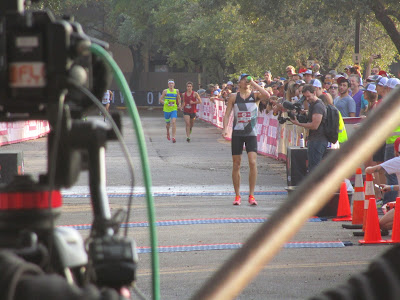 Taking off for another lap (4 beers, 4 quarter mile laps): 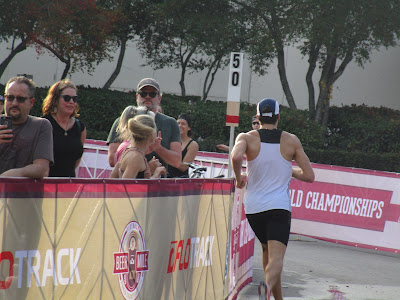 A couple of the chasers: 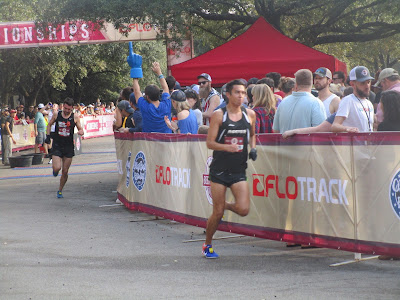 The winner took it in 4:48, what?!  Not a world record, apparently it was a little too humid for drinking plus running plus breathing all at almost the same time.  Whatever, that's crazy fast.

The aftermath, with the guys mostly keeping their cookies (these are the professionals): 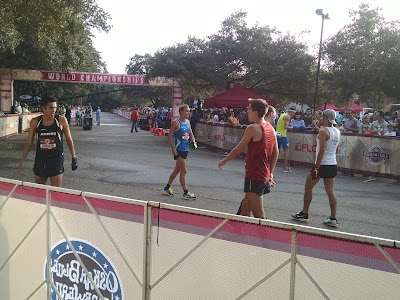 It was time.  I decided to make a serious run at the mileage challenge title.  Only 8 days left, which is a reasonable time frame to focus on something.  I took the week off from everything else and devoted my days to running and/or biking from 8 to 5.  It was like a self-created stage race.  Get up, eat, get out and explore Austin, come back before dark, shower and eat, fall into bed.  For some reason I really enjoy that, a week at a time.  Nothing else to do but run (or bike)!  And figure out where to go tomorrow.

When it was cold (and it got pretty cold), I ran.  When it warmed up (which it did, because this is Texas), I biked.

I ran to Town Lake, up the Greenbelt and out at the Hill of Life, over to Bruegger's, down to Red Bud, back along Town Lake, with a stop at Trader Joe's.  Where I found this on the bathroom wall - fun!  And yes I do! 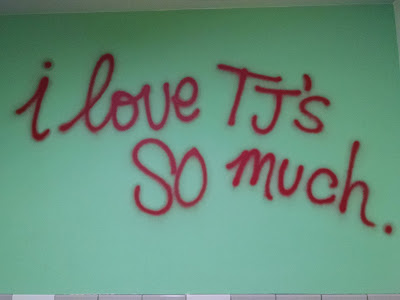 It's a take-off on a local mural, as is this iconic (but slightly modified) frog: 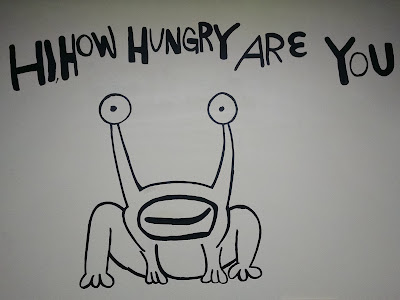 I spent the next cold day alternating biking (cold feet!) and running (warm up the feet!).  Repeat.  At least the sun was out.

I was excited to spend most of the next day trekking over to McKinney Falls and running/walking all of the trails including the paved loop.  I added some biking at the end, returning to the park to ride the Homestead Loop.  Excellent.

It finally warmed up, so I rode to Westlake, stopped at the Bicycle Sports Shop to replace an almost-slick tire, and then up to Walnut Creek park to try to figure out the trails now that there's a paved path right through the middle of the park.  Should have brought my orienteering map.  And the paved path goes all the way to Mopac, that is so weird.  I found a half-decent route back down through east Austin to cap off the day.

The next day was fairly epic.  First I tried out the new (at least to me) Walnut Creek bike path up the east side of Austin, along the railroad tracks and behind Freescale all the way up toward Manor.  Nice!  Then on roads up to Round Rock, with a slight uphill and headwind.  By the time I reached Dave's house I was starting to wonder if I had enough time to get back before dark.

Proof of arrival in Round Rock (my friends weren't home, I probably should have checked that before I rode all the way up there, but it was still a fun destination): 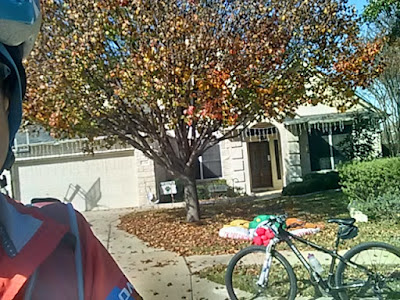 Happily the tailwind and slight downhill helped me get back to south Austin at a good clip, and I even had time to stop at Kerbey Lane for a pancake.  This sure has been a fun week.

Last big run in Austin - of course, I had to go here: 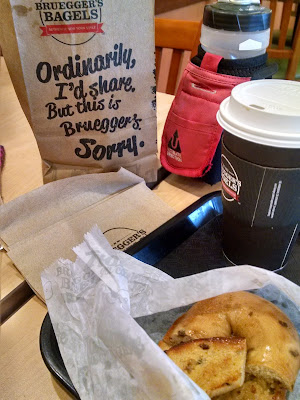 There was a brass band playing Christmas music at the Capitol, neat! 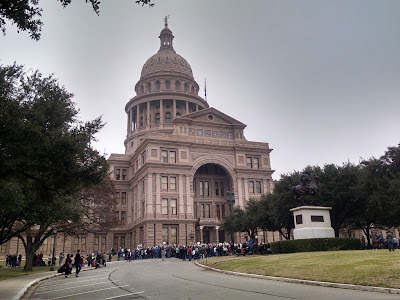 A sculpture on the UT campus that I haven't seen before (except the version in Las Vegas): 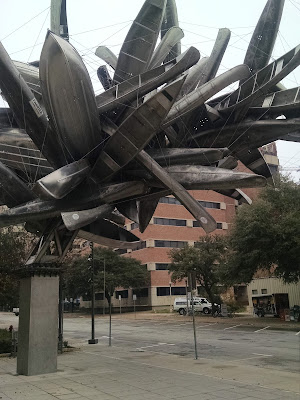 Lunch at Thai How Are You? which I was hoping would be better because I love the name and the pad Thai/sushi bento box idea, but it was only just OK. 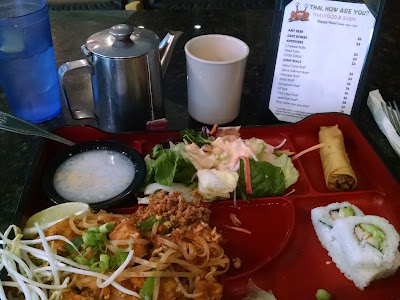 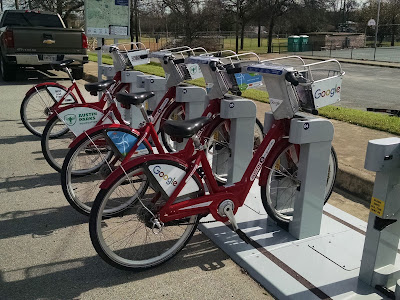 Second-to-last day was some running at the Frankston track during our brief Christmas weekend there.  Easy to log a few miles later in the day, and nice for working off some holiday food.

The final day involved Christmas morning with the family, driving back to the Austin, then running in the evening.  I lasted almost to midnight (I had to stay up for something else anyway, so it wasn't completely idiotic) and optimized my mileage challenge time.  My only regret was that I had remembered my mileage wrong and missed a round number by 0.1 miles... as problems go, that's not one of them.

Phew!  A good solid finish to a very interesting month.  Big thanks to Brian for setting this up and maintaining the tracking for a huge bunch of people!