May you have a wonderful, peaceful holiday season! Love, Marcy and John 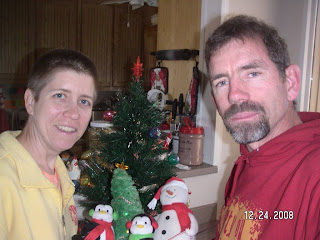 As my brother Kip says, "Best movie trailer ever":

http://www.youtube.com/watch?v=d6wRkzCW5qI
Posted by Marcy at 4:31 PM No comments:

It's finally done! Time to move on to planning the next big adventure...

http://www.kipley.com/marcy/gta/index.html
Posted by Marcy at 8:20 AM No comments:

My teammate Dave wrote a detailed race report (and I added a couple comments) about our race last Saturday:

Fun times!
Posted by Marcy at 8:41 PM No comments:

Last weekend Team Vignette went to Sam Houston National Forest to compete at the 12-hour Texas DARE (Dave Boyd Adventure Race). John, Kip, Dave, and I don't often get the chance to race as a foursome, so we enjoyed spending some quality time together. We were also very honored to be racing in the memory of Dave Boyd.

There was a sprint race held at the same time, and the first leg was a marked trail run for teams on both courses. It was a nice run through the woods, on dirt roads and trail.

The second leg involved running to the boats, paddling to an island, then paddling and running back. The catch was that the boats were over 7 miles away on paved roads. The running part was OK, but the pavement part was hard on our feet. Especially for Kip and Dave, who ran the Sunmart 50-miler last week!

We paddled along an inlet toward large Lake Livingston, while I fretted because it was a really windy morning. Sure enough, the lake was full of confused waves and we bobbed up and down. I did not enjoy this very much.

Team MOAT, the only team ahead of us at that point, was enjoying it even less because their boat flipped and all four teammates ended up in the cold water. We paddled toward them to see if we could help, while Rick Sanders (the race director) approached in a john boat. Our two canoes ended up pulling Patti and Jonathan to shore while Rick towed their boat and brought Shaun and Nathan in.

Rick called a halt to the lake section, which is good because we had already decided we were skipping the rest of it! I was so happy we didn't go for a swim ourselves.

We helped MOAT try to get warm (including firing up a grill on the porch of an empty house), got our boats back in the water, paddled back up the inlet, and started back on foot to the TA. We passed a few teams who had been turned around, and many of them seemed worried about us and MOAT. We reassured them that everyone was fine, MOAT was just wet and cold.

MOAT decided to continue racing, following us back on foot instead of taking a ride that was offered. Way to hang in there!

The next section was navigation in the woods on bikes. The first checkpoint was easy. We had an issue finding the road toward the next CP, ending up walking knee-deep through swamp mud, twice. We were a bit chagrined riding through TA again, looking for a trail and smelling like swamp. We found the road on our second try, and from there our nav got better.

The pipeline/old roads were interesting to ride on. There were a bunch of blown-down trees over the trail, so I got to practice riding over the smaller ones and carrying my bike over the bigger ones. Thank goodness for a lighter bike!

Riding up a pipeline trail, Dave came to a stop where it appeared the trail ended at a creek. John and Dave thought they could see it start up on the other side, so we waded through knee-to-thigh-deep water. At least it wasn't swamp mud, and they were right about the trail on the other side. Nice work.

We passed a couple teams on this leg, coming back into TA with one team out ahead of us. The next bike leg followed the sprint course around the bike trails for 8+ miles. MOAT sped by us on the trail, which was not surprising. They had actually dealt with a broken chain, fixed it, and still caught us on bikes, they are that fast.

I was just glad to be finished biking before dark. I was also glad we didn't have to do the Sevylor pond paddle like the sprint teams! One more leg - trekking/nav for about 6 miles.

We started out with MOAT at the first point, and Kenny Farrow's team was right on our heels. On the way to the next CP it got dark, we followed a creek and then a ditch for a ways through the underbrush, then we saw a team coming toward us. It turned out to be a HART team - they had been in the lead but were moving slower because one of their teammates was not doing too well. John located the CP flag behind a tree not far from there. We lost track of MOAT somewhere about this time.

We followed HART up the creek to the last bushwhack point, then took off running up the pipeline trail. The final two CPs were mostly on dirt roads/trails, and we were ready to run to try to take the lead and hang onto it. Coming back on an out-and-back we saw HART coming toward us with MOAT not far behind, so we were motivated to keep running. I decided the most direct bushwhack route would not be a good idea (confirmed by HART and MOAT who both tried it), and instead we took the Lone Star trail around a longer but faster path to the lake.

One last CP, a bit more jogging, then we were done! Then it started raining off and on, which must have been tough for teams still out on the course. We got our TA taken down in between showers (both types) and a nice awards ceremony where Dave Boyd's father handed out awards to the top 3 teams. Then we headed home for a nice Sunday of rest.

Congratulations to everyone who stuck it out and finished this tough race!

Well, I'm closing in on completing this puppy. As usual, writing/publishing the report takes longer than the race itself - in this case, about 6 times as long. I should start collecting stats to get an average "report time to race time" ratio for the various races we do :)

For those who wish to get a jump-start on this very-thrilling (not really) reading, or who are desperate for something to assist with their insomnia (can you tell I've been listening to a lot of Car Talk lately?), check out:

Like last time, the photos are the real value.

The "Next Day" link at the bottom of each day will work except where the following day's page has not yet been posted.

For anyone wanting to wait and read it all at once (??), I'll post a "report complete!" note on the blog when it's ready for you.

Happy scrolling!
Posted by Marcy at 4:12 PM No comments: