West side of Florida

Well hello!  I've got one more set of photos from early March, and it's probably way past time to post them.  On the other hand, I don't yet have anything to follow it up with (staying put and all that) so it's nice to go back and look at these a couple months later.

So here we have some parts of Florida that we had not seen before, starting with a boat tour in the Everglades.  With Siobhan, Kip, and Rodney too!  I've been wanting to see the Everglades for a while now.  We got off the cruise ship on Sunday morning and had plenty of time to drive out there (and our truck was available for that purpose, for once).

Let's go see what animals we (or our boat captain) can spot. 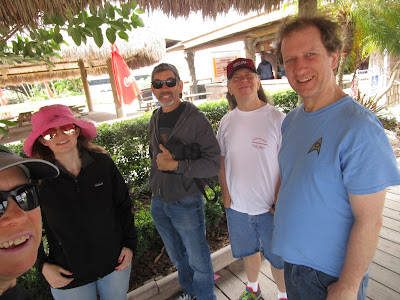 Not too surprising that a gator showed up first! 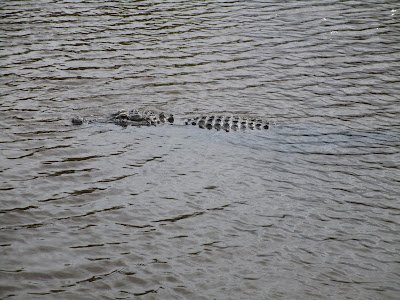 This bird was neat, not only for its color but also how it would run across the lily pads.  I believe our guide called it a purple gallinule: 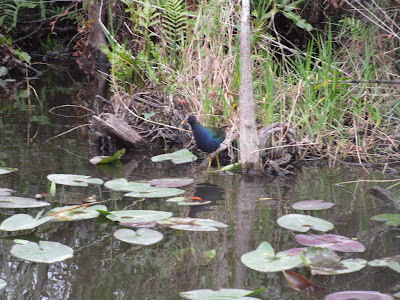 It was fun coasting the airboat through the waterways, and our boat captain seemed to enjoy showing off how it could get up to speed and slide sideways in the wider areas.  For the narrow passages he kept it to a photo-taking velocity instead: 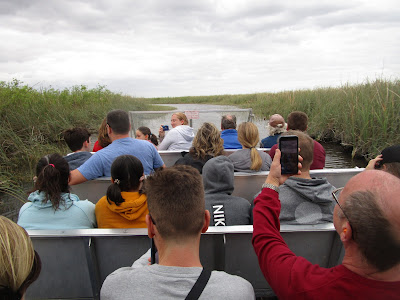 Possibly an anhinga?  There were herons out there too. 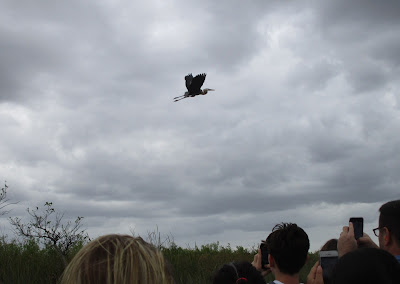 Another fun close-up encounter with a purple gallinule: 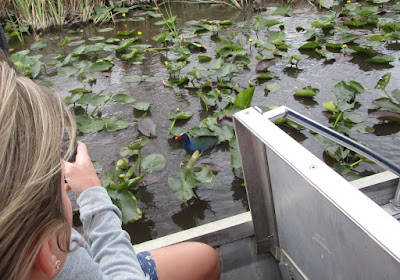 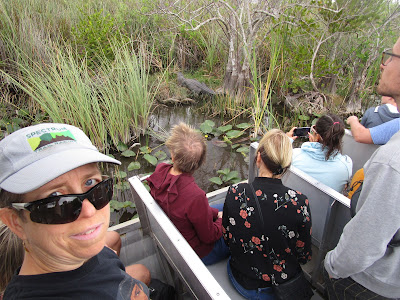 This guy was super chill, just hanging out next to the boat and watching John perhaps just a little too closely... 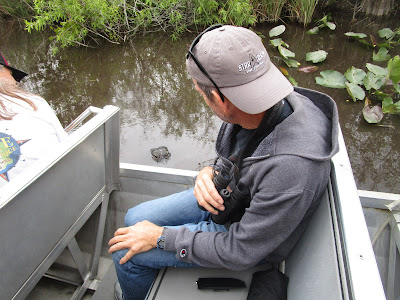 Back at the ranch, we were treated to an interesting animal show, starting with this handheld scorpion that several people got an up-close look at: 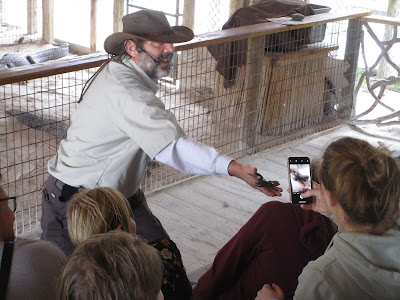 Snacks for the gators who decided it was worth moving a little for: 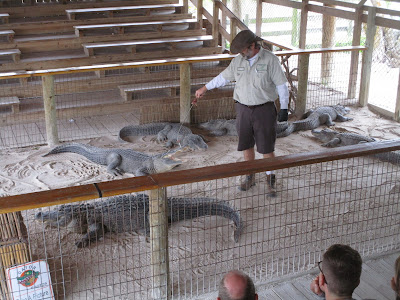 Adorable!  I wish I could remember this little fella's name: 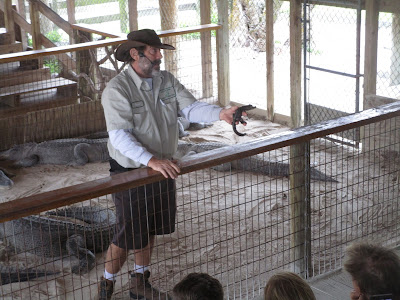 We had to take our companions to the airport :( then John and I came back to the Everglades to camp overnight and check out more of the park.

I think we saw some wood storks flying around, but never got a good shot of them.  In lieu of that, here's the visitor center display - interesting bird! 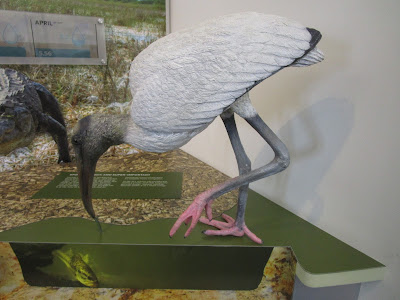 Going for a walk on the boardwalk: 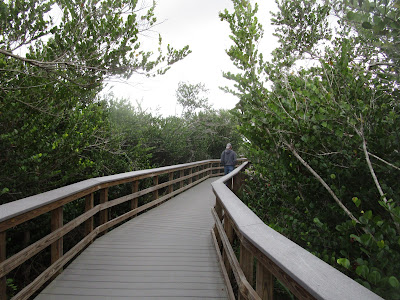 Snowy egrets and other birds abounded: 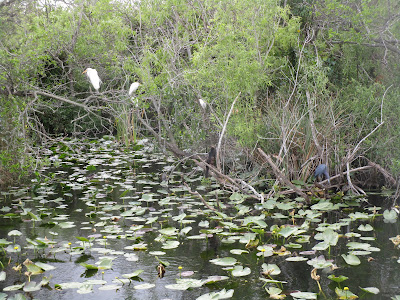 The next day we started driving up the west coast of the state, stopping for some exploring and running in Myakka River State Park.  They have a neat treehouse/viewing stand with elaborate stairs and a bridge through the canopy: 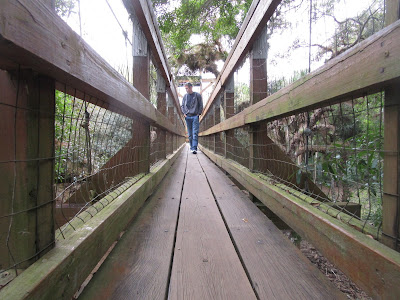 Fun tree shapes and moss and all kinds of different vegetation from what we're used to: 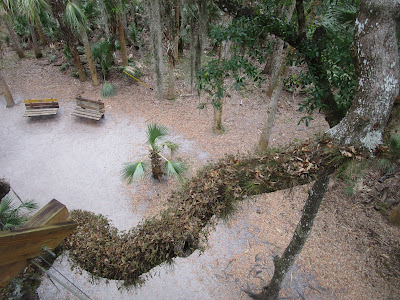 And a wonderful view of the forest from one of the higher spots around: 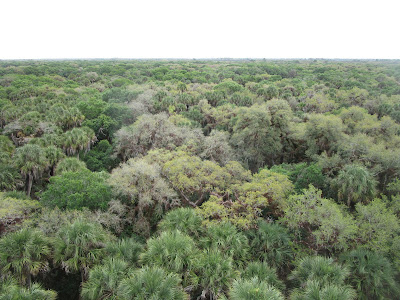 And more animal watching, this time on our own so I'm sure we missed some things but there was still plenty to see and try to ID.  So, my online image search says this is a limpkin - a what?  Not only are there many interesting birds in Florida, but many of them also have great names! 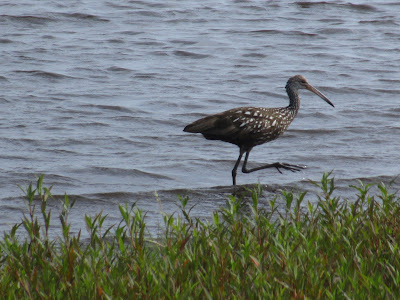 This was a great spot to hang around for a while, with birds to watch and alligators to track.  Lots going on that morning: 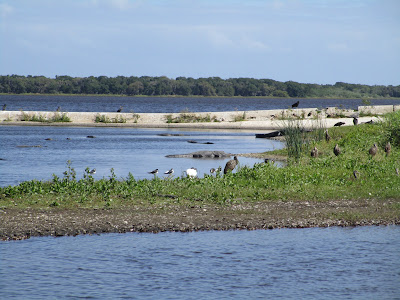 I'm getting better at picking out the great blue heron: 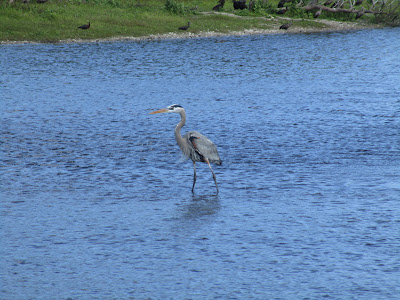 Perhaps a glossy ibis in the foreground, but our attention got pulled to the gator with something in its mouth.  What the heck? 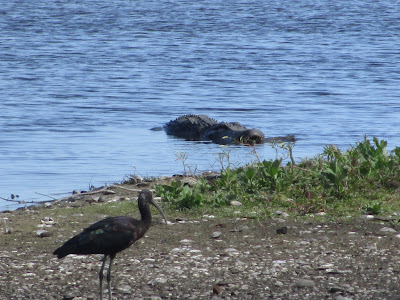 We couldn't get a good angle to see what it might be, but it seemed to be large and hairy.  Maybe a muskrat?  We watched for a while but the gator had more patience than we did. 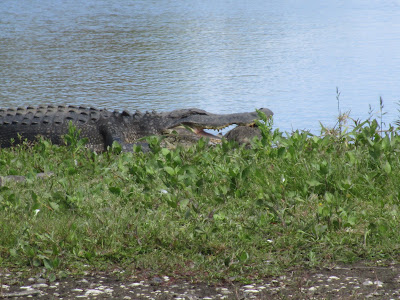 So we had to move on, continuing north, and spending a few extra miles/minutes searching around Tampa for an open campsite.  We barely found one, happy to spend another quiet night in a peaceful park in the woods instead of having to resort to a hotel room, yay!

We were excited to stop at Crystal River since it sounded like there were manatees around.  Three Sisters Springs did not disappoint - neither did the manatees!  There were plenty moseying around underwater, our first manatee viewings ever.  So cool!

And so not easy to photograph (unless you're underwater with them, that must be amazing).  There were a few in the canal, coming up for air occasionally and reminding us of tiny whales (sort of but not really).  I was just so happy to finally see some. 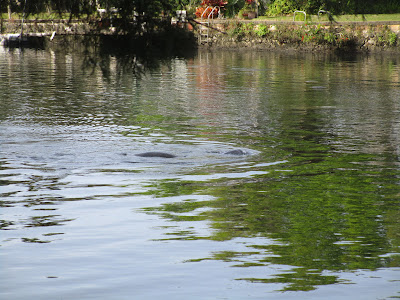 A better view, a group hanging out in the sunlight: 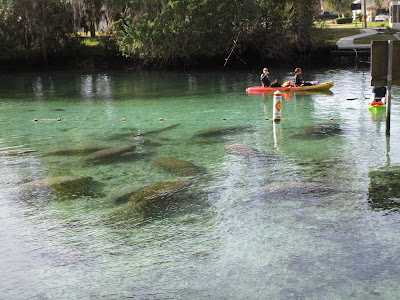 This one was interesting - it has a tracker buoy following it wherever it goes.  We had seen the buoy bobbing across the way and it was neat to get a closer look at what it was attached to.  Thank you, sweet manatee! 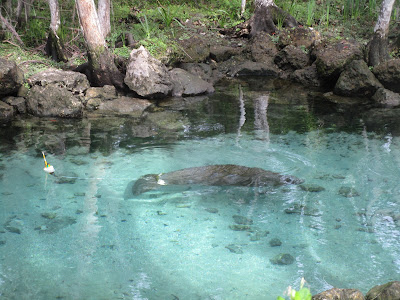 A walking bird - another ibis perhaps (like a juvenile white one)? 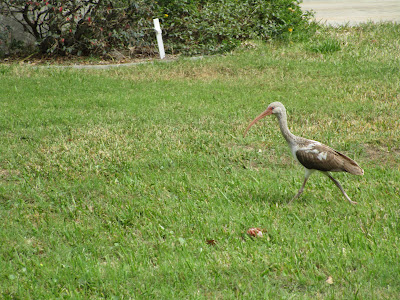 We sure got our share of wildlife viewing in Florida, that was great!

One more quick stop on the way back to Alabama, getting a glimpse of the capitol building in Tallahassee: 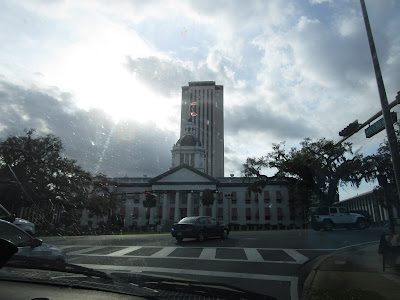 John caught this one - two TJ's in the same parking lot  :) 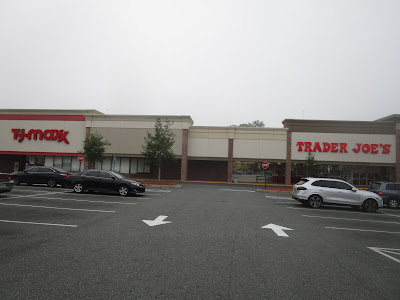 That was a fun set of photos to go through again!

Our life since then involved a virtual RV Entrepreneur summit while we stayed at Lake Guntersville campground and joined in via our computers.  We did a bunch of running on the trails there, which was great - quiet, remote, lots of trees, plenty of trails to explore and hills to climb.  Then we drove almost straight to Austin (with one quick overnight in northern Louisiana) where we have been "in place" ever since.  Instead of running in Zion for my birthday, we Zoomed with friends (a very nice substitute).

It might be awhile before we have more travel/running adventures to report on.  Until then, we're focusing on our All Electric Project, so if you're missing my "totally engrossing" reporting, check us out over here:
https://allelectricproject.com/blog/

Hope everyone is safe and well!