Last weekend I flew down to Maryland to visit briefly with Kathy and Bob (hi! bye!) and then drove to Virginia for an organized training run on the Massanutten 100 course. I'll be doing that race in May for the first time, so it was nice to see the middle third of the course and meet a few people also doing the race. Major bonus was warm weather and the chance to really run, on trails, without snowshoes :)
About 50 folks gathered at the slightly-chilly start: 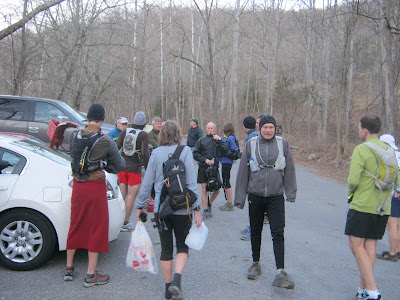 Then the run director told us to get going, so we started up the first climb. Nice little trail up the side of the hill with a few switchbacks. A bit of an action shot: 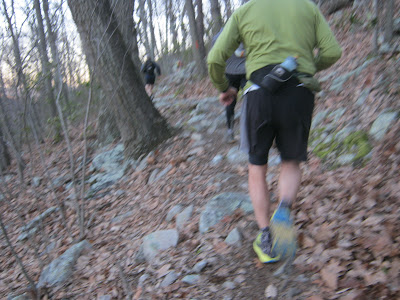 An attempt at an on-the-fly selfie: 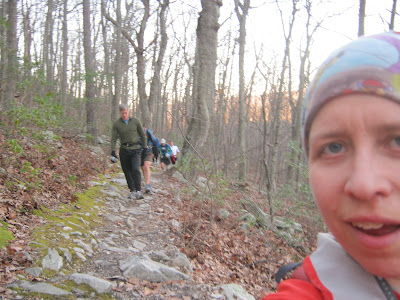 It turned out to be a very pretty day with lots of gorgeous sunshine. Also lots of wind, which we especially felt up on the ridgeline. You could hear the biggest blasts coming through the trees and then it was time to hang onto your hat for a few seconds!
The course varies a lot in that section: Singletrack up and down over the ridge, some forest roads, a bit of road running, up a steep hill back to the ridge, along the ridge for a few miles, back downhill, more road, one last big uphill, another section of ridge, and finally 5 miles of the Stephens Trail which seem to take forever. That trail goes in and out, up and down, through one little drainage after another, without landmarks or any idea how far you still have to go. Then suddenly there's the parking lot. That should be interesting during the race.
One of the pretty trails heading toward the ridge: 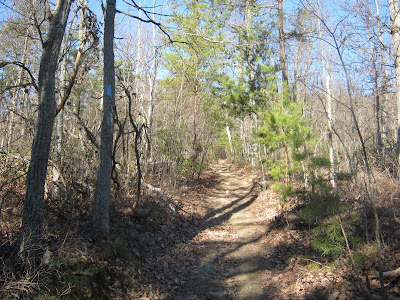 The race motto is "Massanutten Rocks!", and there certainly are plenty of those. But there are also plenty of leaves (at least in February), which tend to cover up many of the rocks. That made for some interesting challenges, including a couple slippery climbs and descents. So I'd like to add that "Massanutten Rocks and Leaves!" 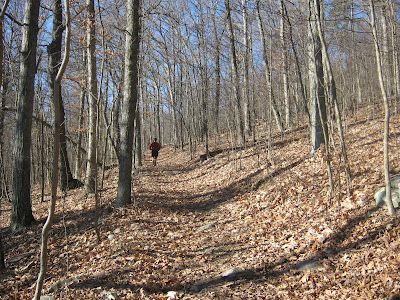 On one of the road sections looking up toward the ridge: 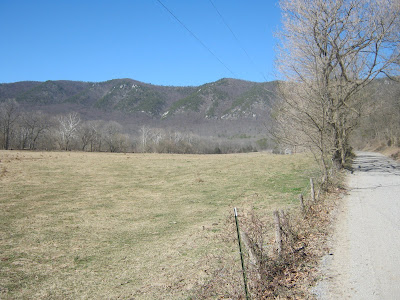 Following the Shenandoah River as it twisted and turned through the valley. At least we weren't paddling on it for miles and miles... 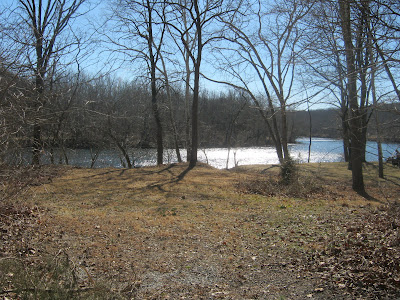 It was real pretty up on the ridge, but without many "photo opportunities" in the way of views. This was one of the better spots I happened to catch: 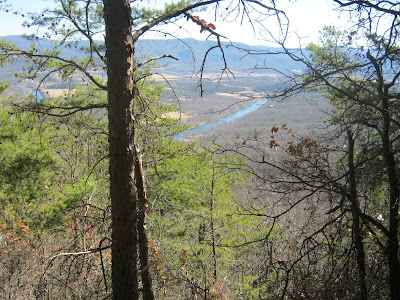 An attempt at photographing the ridge itself - not too successful in showing the terrain sloping down on either side: 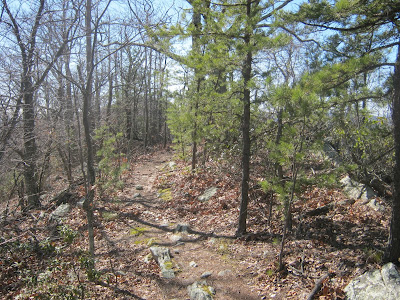 Saturday's training run went great, and we all won a jug of water or soda to take home (leftover from the aid station donations) :)
I stayed in Luray Saturday night to give myself another shot at the course on Sunday morning in the form of a 10-mile loop.
Another pretty morning, another leaf-covered climb. I'm not sure how awake I was right at the start: 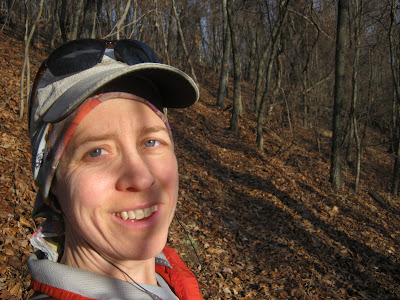 Some interesting rocks in the first climb: 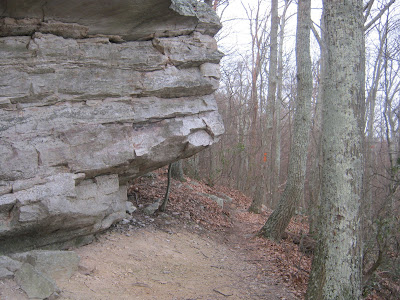 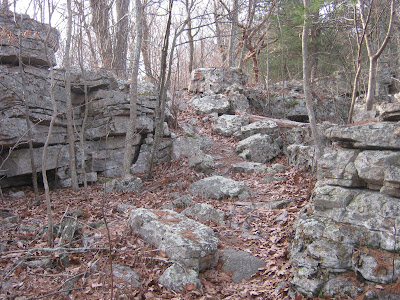 And a short side trip to see a real view! 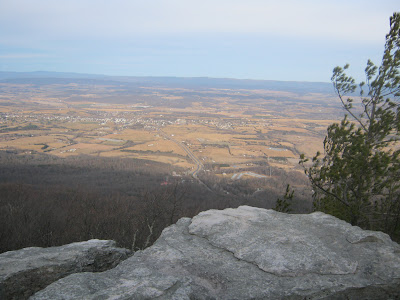 I got to spend a couple hours with Kathy and Bob and the Daytona 500 that afternoon, sweet! Then it was back to Albany and somehow winter had returned in the meantime. Sigh... back on the snowshoes tonight. But at least it's training!
Posted by Marcy at 5:31 PM No comments:

Snowshoe day in the northern Catskills

I'm loving my new snowshoes! Getting into Hardrock (really? I still can't believe it) means getting serious about uphill training, so I went to the Catskills yesterday for the first time. It was a bit of a drive but totally worth it for a long training day.
I started with a short foray to the north along the Long Path, up the first climb: 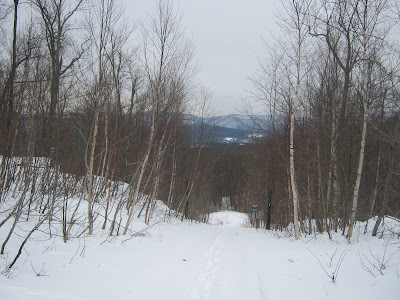 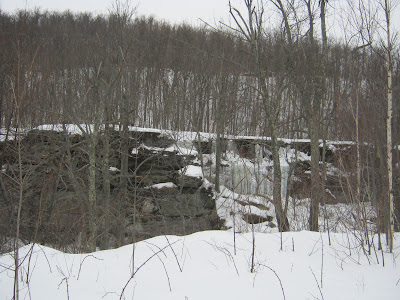 Then back down and up the Escarpment Trail to Windham High Peak. That trail had plenty of traffic and was well-packed to the peak, making for a nice extended climb with a few views of the ridge to the south: 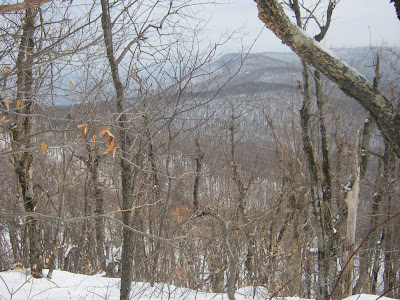 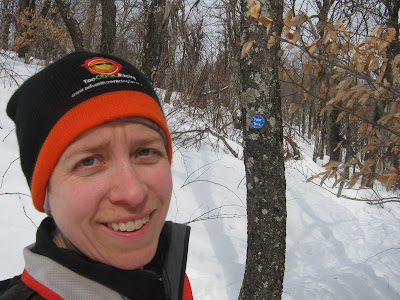 Almost to the top... so if I go up this mountain 4 times would that be enough altitude training for Colorado? I guess not - but it's still better than basically flat/sea level in Albany. 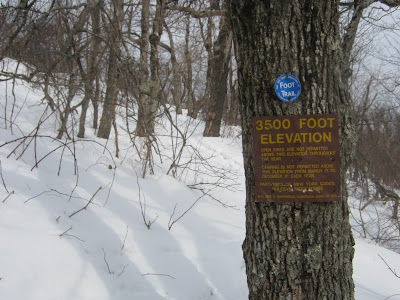 Continuing over the peak, the trail was much less traveled and more work, with was also good training. Just slower. Hard to believe how little distance I covered overall yesterday. But I did see some interesting views and rock formations: 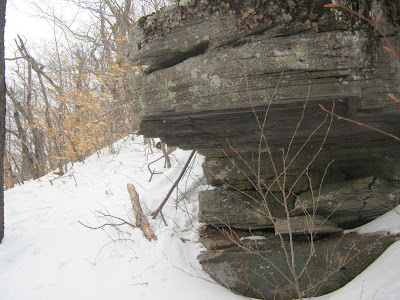 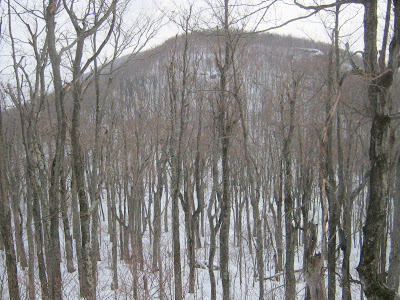 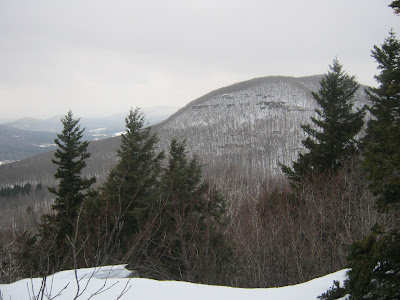 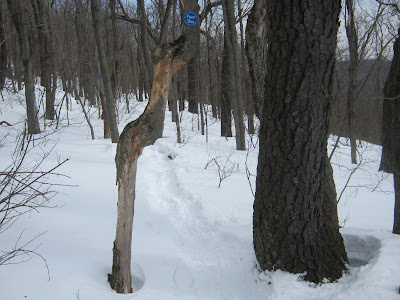 I had nice weather all morning, even some beautiful sunshine as I was heading back: 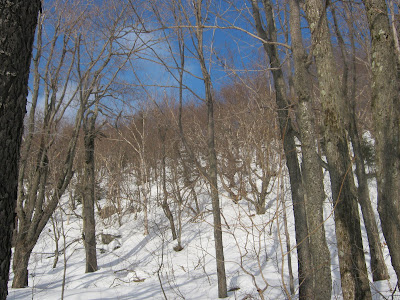 Then... a snow squall hit as I was starting up the final 600-ft climb back to the top of Windham High Peak. That was pretty crazy. My previous tracks were still visible but were in the process of getting covered over. I made sure to watch the trail markers - wouldn't want to go off course at the end of the day in a snowstorm.
I made it to the top with tired legs - after only 4000 ft climbing. I've got some work to do!
The sun trying to break through the blowing snow: 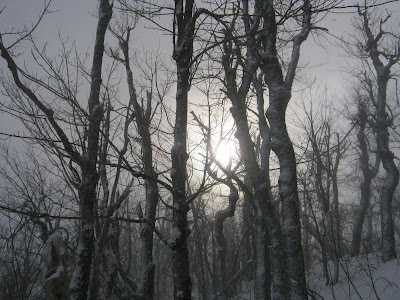 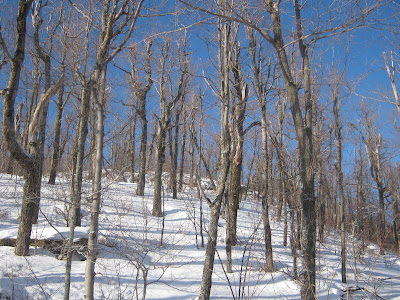 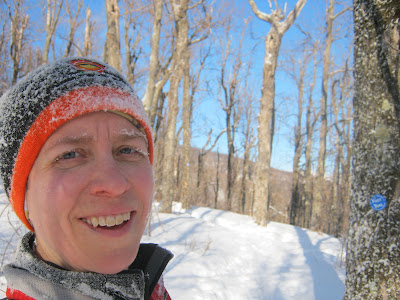 I liked these shadows: 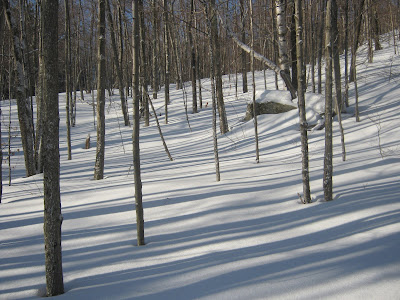 By the time I got back down to the car, the snow squalling had started up again, time to be done for the day. Many thanks to McDonald's for the large bathroom where I could change and for the hot oatmeal and coffee :)
Posted by Marcy at 5:16 AM No comments: