Too Cool put on the Big Chill 24-hour adventure race in/around Bastrop, TX on Saturday-Sunday. John is still healing (nicely), so Adam Reardon stepped in to try his first adventure race. Adam is an awesome triathlete, on and off road, so if he survived the paddle he had a good chance of enjoying the rest of the race. That's pretty much what happened! Jason raced his first Big Chill, and Dave anchored our team as the main nav guy.

We were transported by bus at the start, spending 10 minutes answering trivia questions about various topics related to "Big" and "Chill" and "Big Chill" and all things cold. Teams were released from the starting line in 30-second increments depending on their trivia performance. At least we weren't last...

There was a fun, fast run on McKinney Roughs trails, collecting three CP's (checkpoints) and finding the boat put-in. Here we are running toward John and the boats: 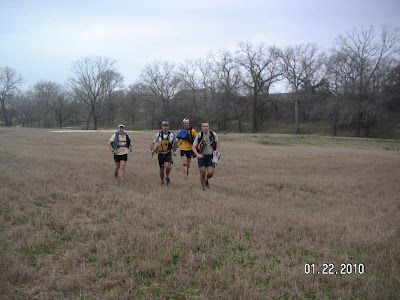 We were the first ones on the water... 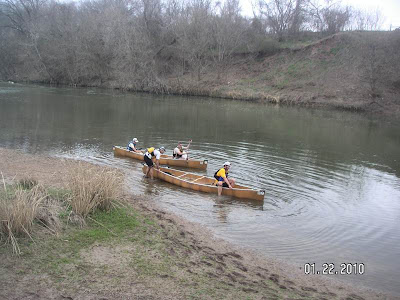 ...but almost immediately got passed up by team iMOAT. They were in a 4-person boat and are super paddlers. They were gone from sight 5 miles later when we decided to portage 3 kilometers along route 969 to cut off over 10 miles of the river paddle. We were sad to find out they had also noticed the portage possibility, but that pretty much sealed our decision.

After a half hour+ of hoofing it along the road (and watching iMOAT way ahead of us), we found a place to drop back down to the river. We were so fast finishing the paddle that the boat take-out wasn't set up yet, so that caused some difficulty for the race organizers. Eventually everything got sorted out and we continued on foot, finding one more CP on the way back to the transition area (TA). Somehow we ended up in front of iMOAT, as each team had a different strategy for dealing with the take-out problem.

The next leg was all biking, starting with a sandy and muddy trail from the south shore of Lake Bastrop to the north shore. Then around to some back roads of Bastrop State Park that aren't normally open to the public. These roads were either poorly mapped or not at all, so we took at least three detours trying to figure out the intersections. One of those detours was completely our own fault, and involved us climbing through a huge, split, downed tree across the path - TWICE, since we had to turn around and come back. The most amazing thing was coming back to the right road and seeing an "Adventure Race ->" sign 100 meters further down the road. D'oh!

More biking on little roads and then on the powerline, a bit more mud here and there, a few hills, more CP's, then back to TA. Nice interesting leg!

The next two sections were short - a quick run through the park to collect 3 CP's, then a paddle on a now-windy lake for another CP. We debated portaging back, but I was convinced that would be too much effort with the heavy rental boats and we paddled upwind instead. It didn't end up being too bad.

Another bike section - this time to Bastrop town for a bit of street nav, carrying our bikes up a long stairway, and then south to the Tahitian Village neighborhood. It's a bit confusing figuring out the streets in that area, but Dave pulled out the Bastrop street map we'd been given at the start of the race and we mostly took a good route.

Two CP's in culverts (thanks for climbing down there, Dave!), one CP at Rising Phoenix, and then back to TA in the dark. One more leg! This one involved trekking to Bastrop State Park and night-navigating to 5 orienteering points. We were real careful with the map-reading, ran on a couple trails, and found the CP's without much trouble. Phew!

One long road run, and we were back to the finish line - still in first, with iMOAT not far behind. Here are our two teams (minus Nathan from iMOAT) after the awards ceremony, with everyone looking at all the different cameras pointed at us: 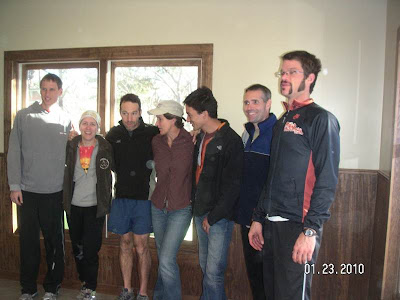 Loved the variety and new areas to explore - excellent race! Thank you to my team and to everyone who helped us in TA!
Posted by Marcy at 8:16 AM