John and I are very lucky to get to spend 2 weeks with our friends Kathy and Bob in Maryland.  Part of this time we are playing tourists in the DC area, something we have been looking forward to for a while.

We started off on the right foot yesterday, heading directly for the Supreme Court where there would be several sets of "arguments" that the public could attend.  Our timing was perfect, arriving just in time to snag tickets to wait in line to get in.  It was windy and chilly but we were just happy to be there: 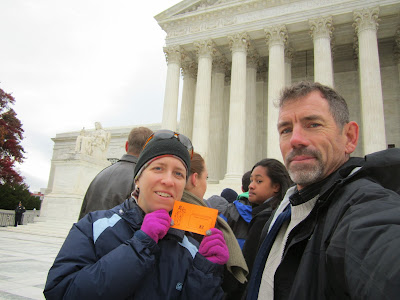 The Capitol across the street: 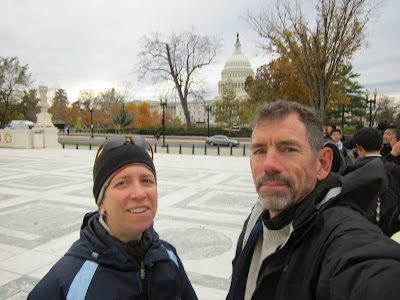 We had to leave all electronics in lockers, so I've got no photo documentation.  However, we did get in, we saw the nine justices, and we listened to two full hours of oral arguments where the justices grilled several lawyers on the details and hypotheticals of two cases in front of the court.  It was fascinating, easier to follow than I expected, and sometimes hard to believe we were sitting "right there" watching it all.

A quick tour of the ground floor after the sessions were over... President/Chief Justice Taft: 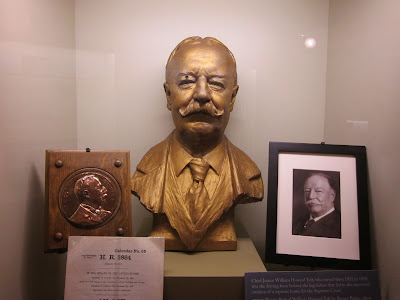 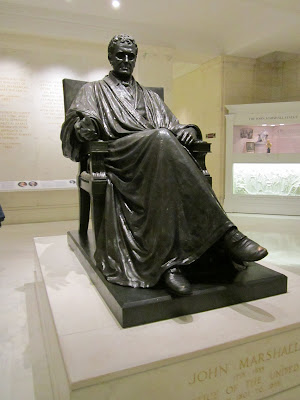 Looking up at the spiral staircase: 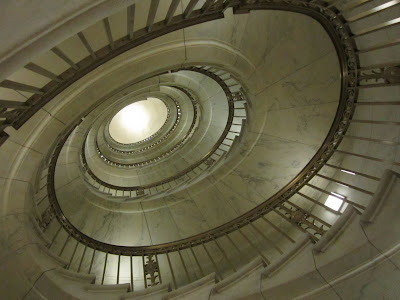 On our way to lunch I spotted some Britto art which reminded me of Danny and the cruise: 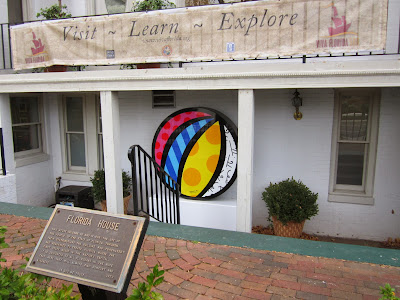 Next we wandered over to the Capitol Visitor Center and immediately got the chance to jump into a tour, what the heck: 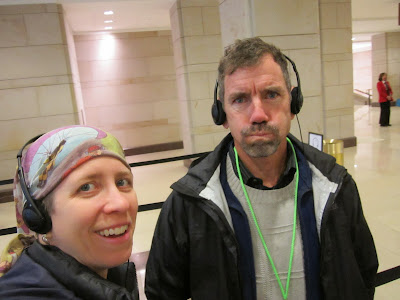 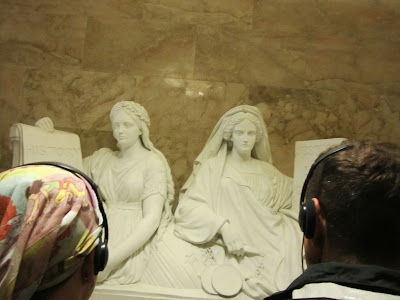 The old Supreme Court room with a really old clock that still runs: 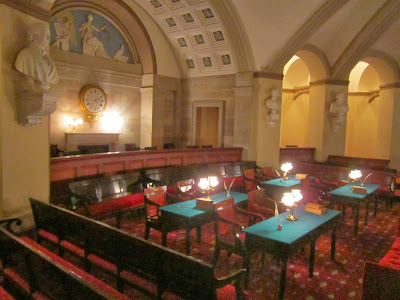 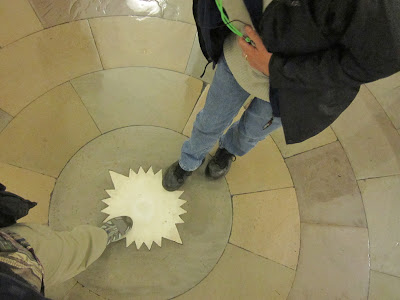 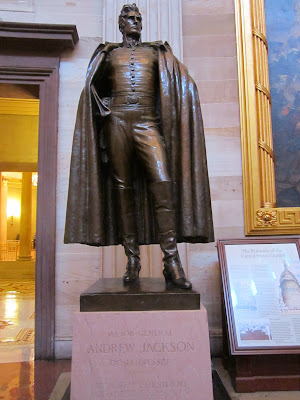 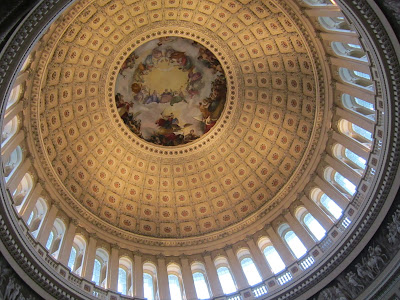 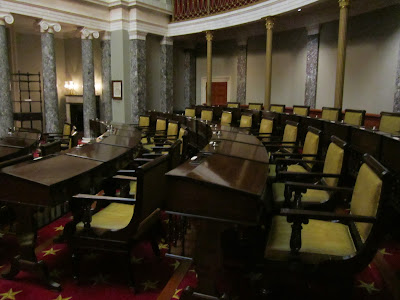 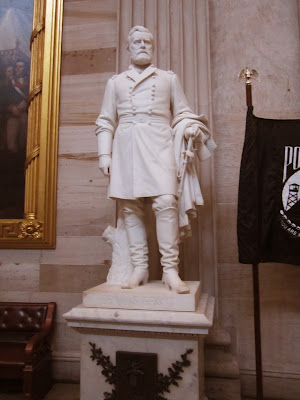 Where Abe Lincoln's desk used to be: 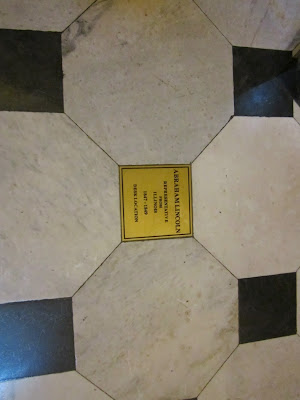 One of the few non-Americans honored: 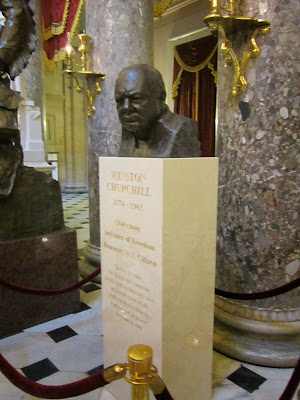 Our own Vermonter, Ethan Allen: 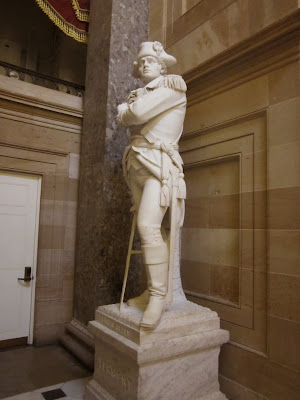 Our excellent tour guide, with Rosa Parks behind him to the left: 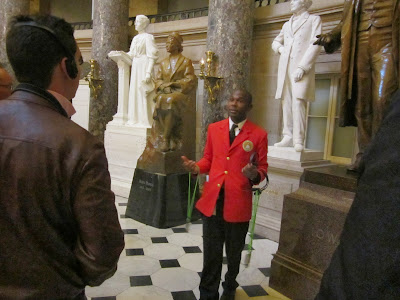 Ronald Reagan, with a piece of the Berlin Wall in the base: 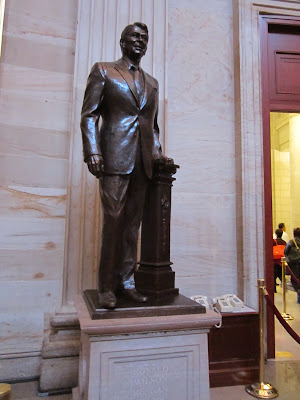 We were also lucky to get passes into the House and Senate galleries, so we unexpectedly ended up in the House chamber, looking down at, well, nothing was going on at the time.  But it was still cool.  Again, no electronics allowed, no photos.

So we ventured over to the Senate where there were at least some people working.  We heard something would happen in a little while, so we hung out and waited.  In return for our patience we were treated to a speech by John Cornyn where he threatened to filibuster a judiciary appointment by President Obama.  He left, and a while later Dick Durbin came in and waxed eloquently about how the Republicans are trying to keep women out of positions for which they are fully qualified.  He left, then Patrick Leahy (from Vermont!) stood at a podium and expanded on Mr. Durbin's position with stronger, more emphatic language about equal rights for women.

Not long after that, there was a vote on the issue and all the Senators came in to record their vote and apparently have a big informal gab session on the floor while the votes were eventually all registered.  It looked all unorganized but eventually the votes were gathered and counted.  There was a majority of "ayes" but not enough to overcome the filibuster threat.  But no actual filibuster.

They had another vote that passed easily (one dissent) and gradually they all left until it was just a few people hanging out working on laptops.  It was all quite interesting, and we certainly got our money's worth for the day!