The other "bookend" of our trip to Texas (the first being a day in Austin with friends and the Barkley documentary) - an urban race in Fort Worth, cool!  We ran the Urban Dare with hopes of getting entry into the Super Dare next year.

It was a beautiful day for racing.  We started with a run toward downtown, veering off into a park for a three-legged race dare.  Partway around I noticed I was holding the cluesheet close to John's face, so I asked him, "Am I poking you?" - "No, am I poking you?" was his answer, and my mind dove down into the gutter and made me giggle.  When he followed it up with "I didn't think I was," it devolved into all-out laughter.  Funnest 3-legged race we have done yet!

Our first downtown checkpoint was making a balloon sword, and thankfully I still remember how.  It's never clear in my mind but somehow my hands make it happen.

Still smiling as Dave guides us to our first photo checkpoint at the Zipper mural: 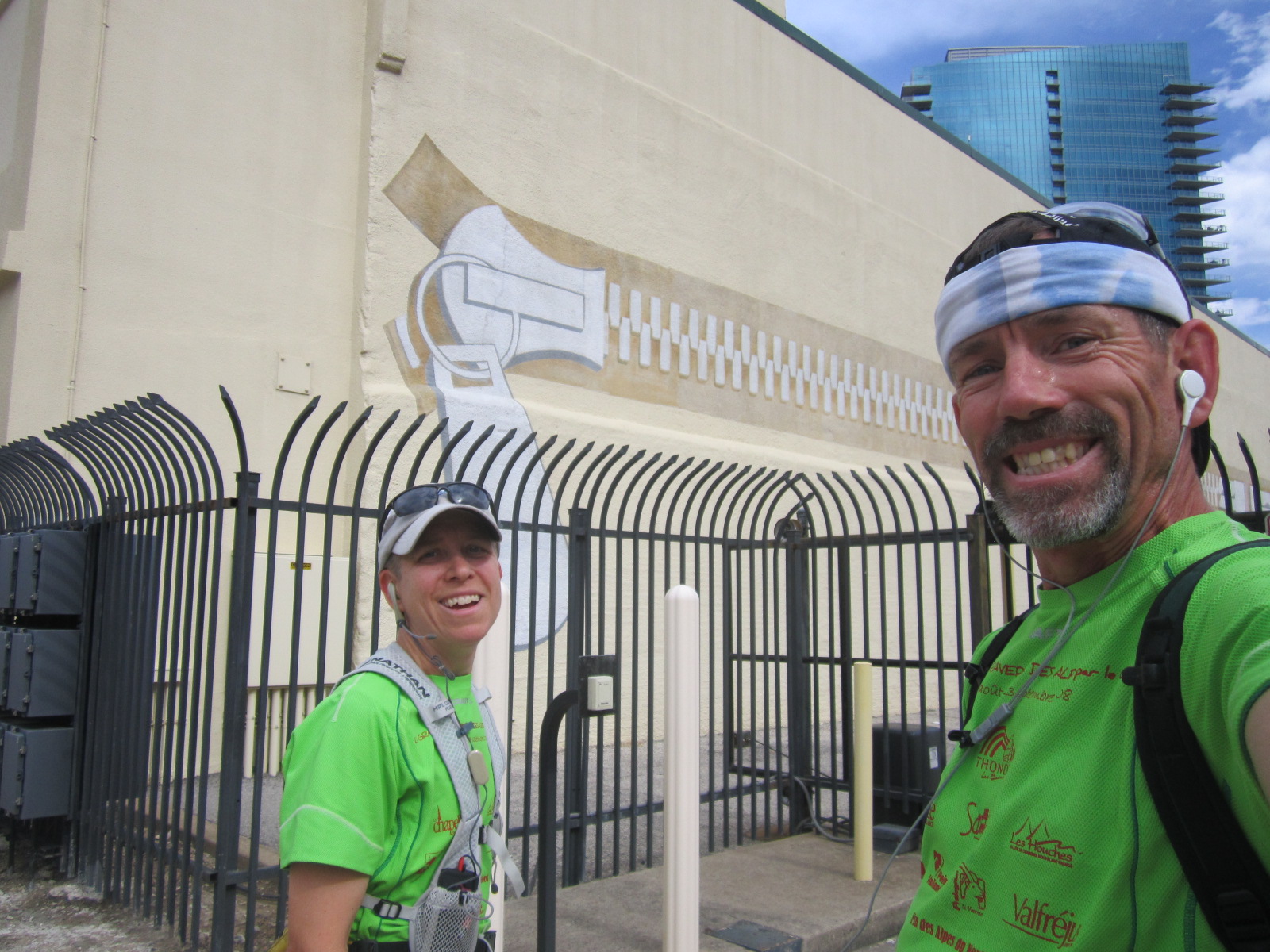 Yay for Whiskey and Rye! 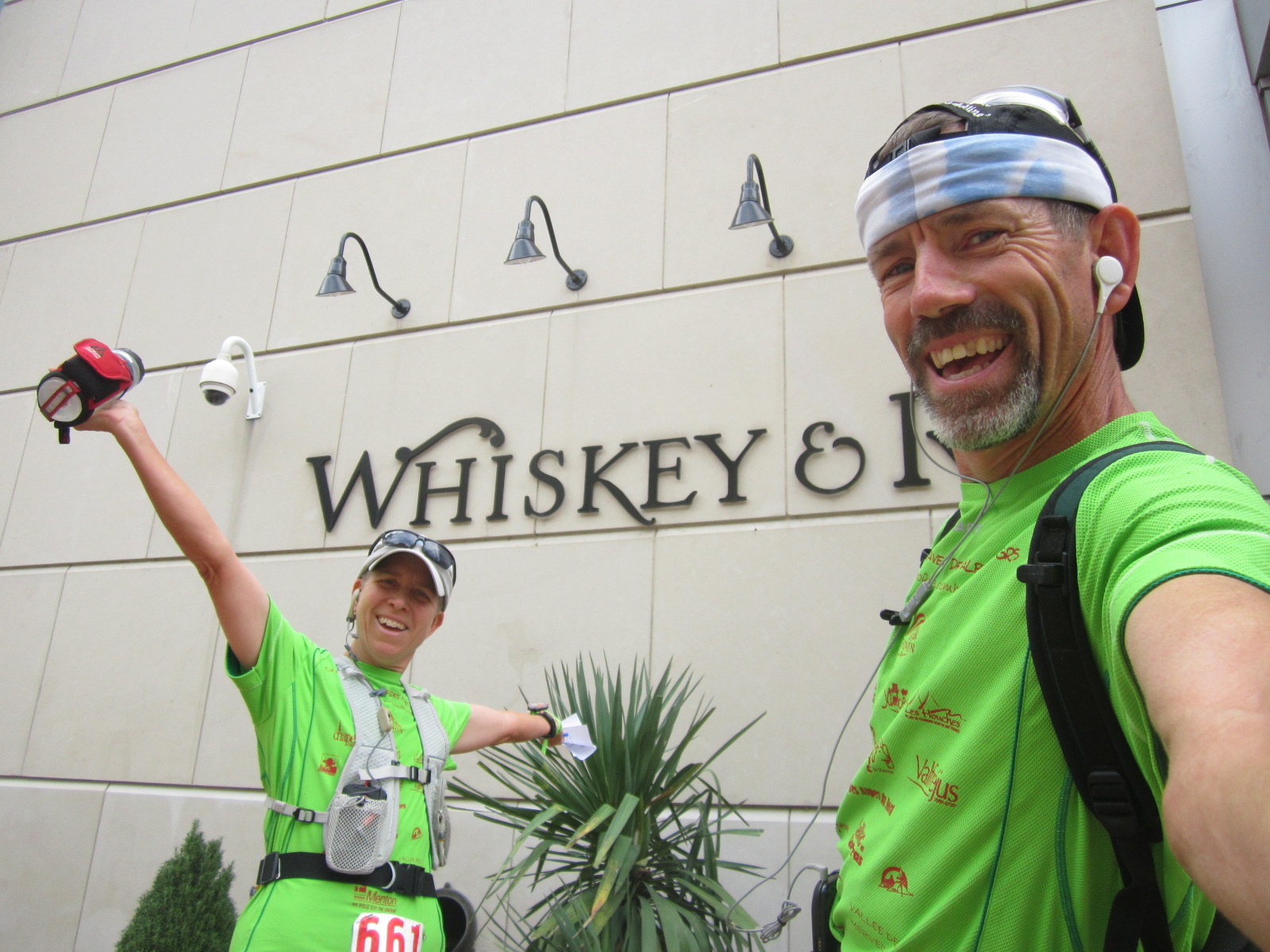 We found the Scrabble Stick dare near the convention center and started looking for our letters.  While we were doing the addition, the volunteer stamped our passport.  John suggested he might need to check our word for the right answer.  The helpful (and very nice) volunteer was like "Oh, OK!  Did you get 165?"  Um, yes, as a matter of fact we did.  Just now, in fact, and that's the truth!  This was turning into one of our easier races.

Next I got dropped off the phone call with Dave, then suddenly Sheila was on the line - ?!  Hi Sheila!  We were both quite confused about this turn of events, as Sheila was in the car driving back from riding her bike all the way across Texas.  Congratulations Sheila!  Can I call you back?  Later we learned that it was MY phone that had dialed HER.  It seems that my phone decided on its own that it was an urban race, so Sheila should be called.  Sorry about that Sheila!

In the middle of that interesting exchange, we managed to wrassle up a couple of strangers for our scavenger photos.  First a cartwheel: 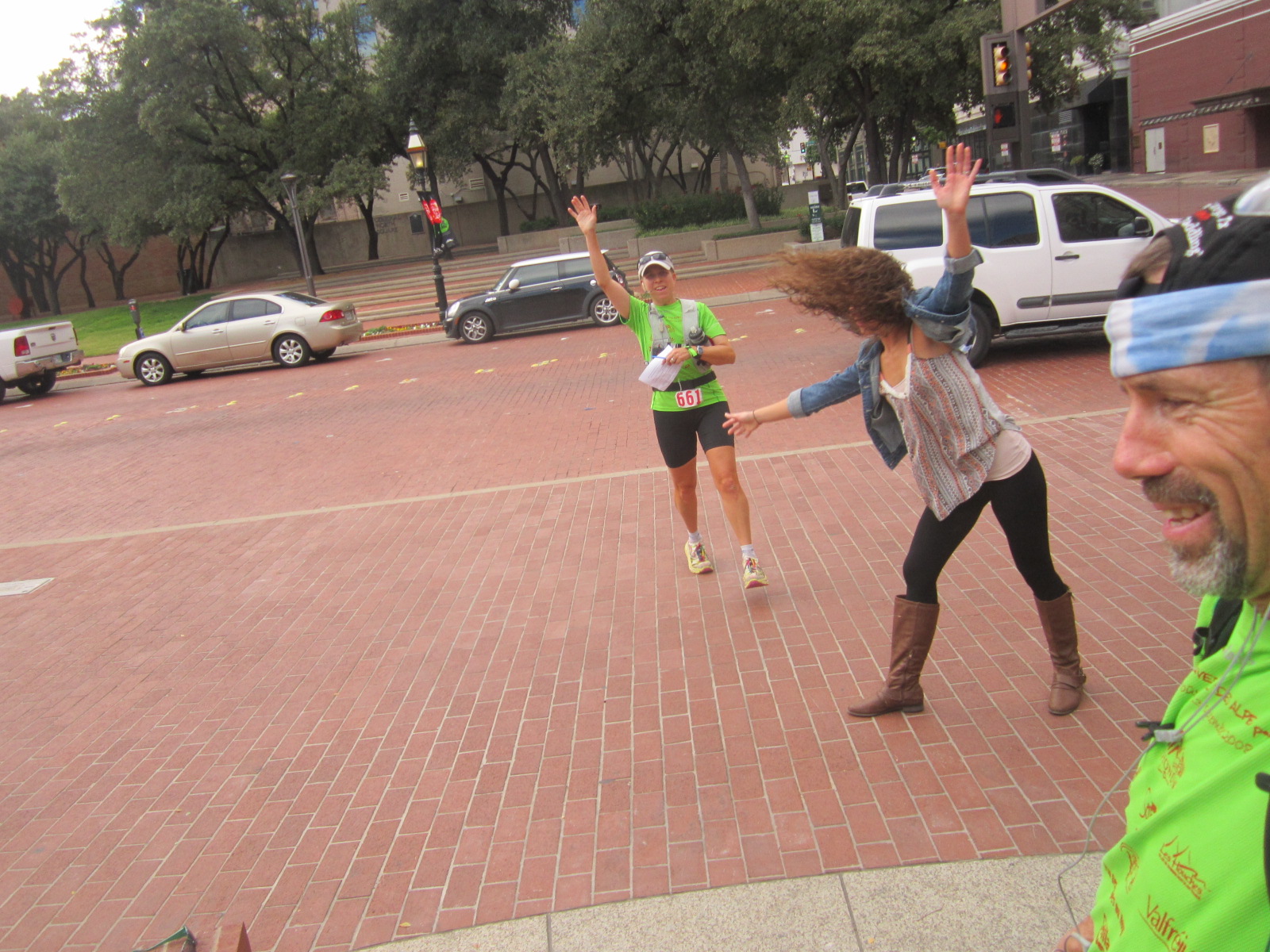 And a marriage proposal with her friend - thank you both! 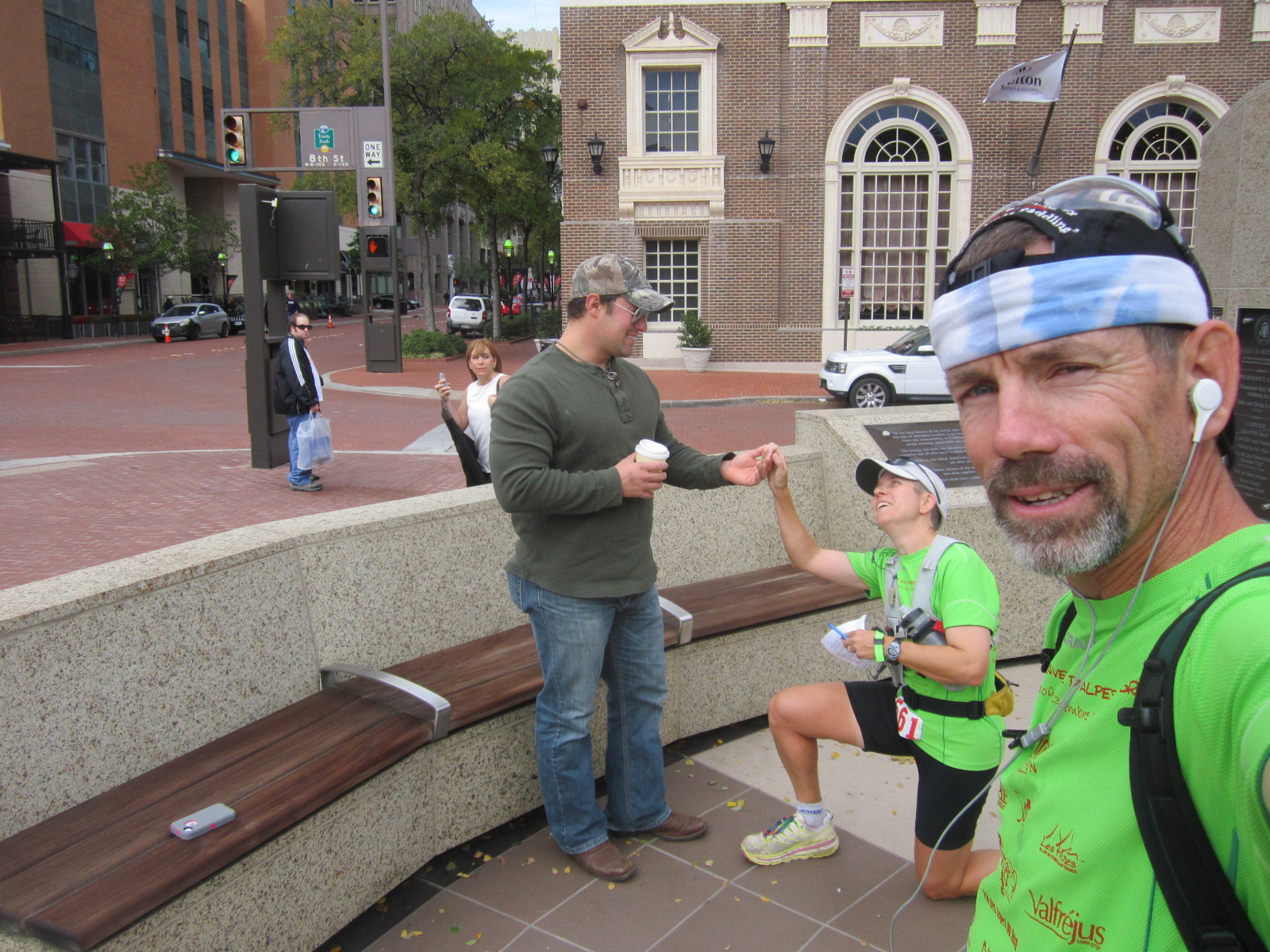 We were looking for someone wearing TCU Horned Frogs garb for a 5-minute bonus, but every single person who was wearing purple was from Kansas State - what are the odds?

Back on the phone with Dave, back to the race...

Here we are at Casablanca coffee house (tiny sign in the coffee cup): 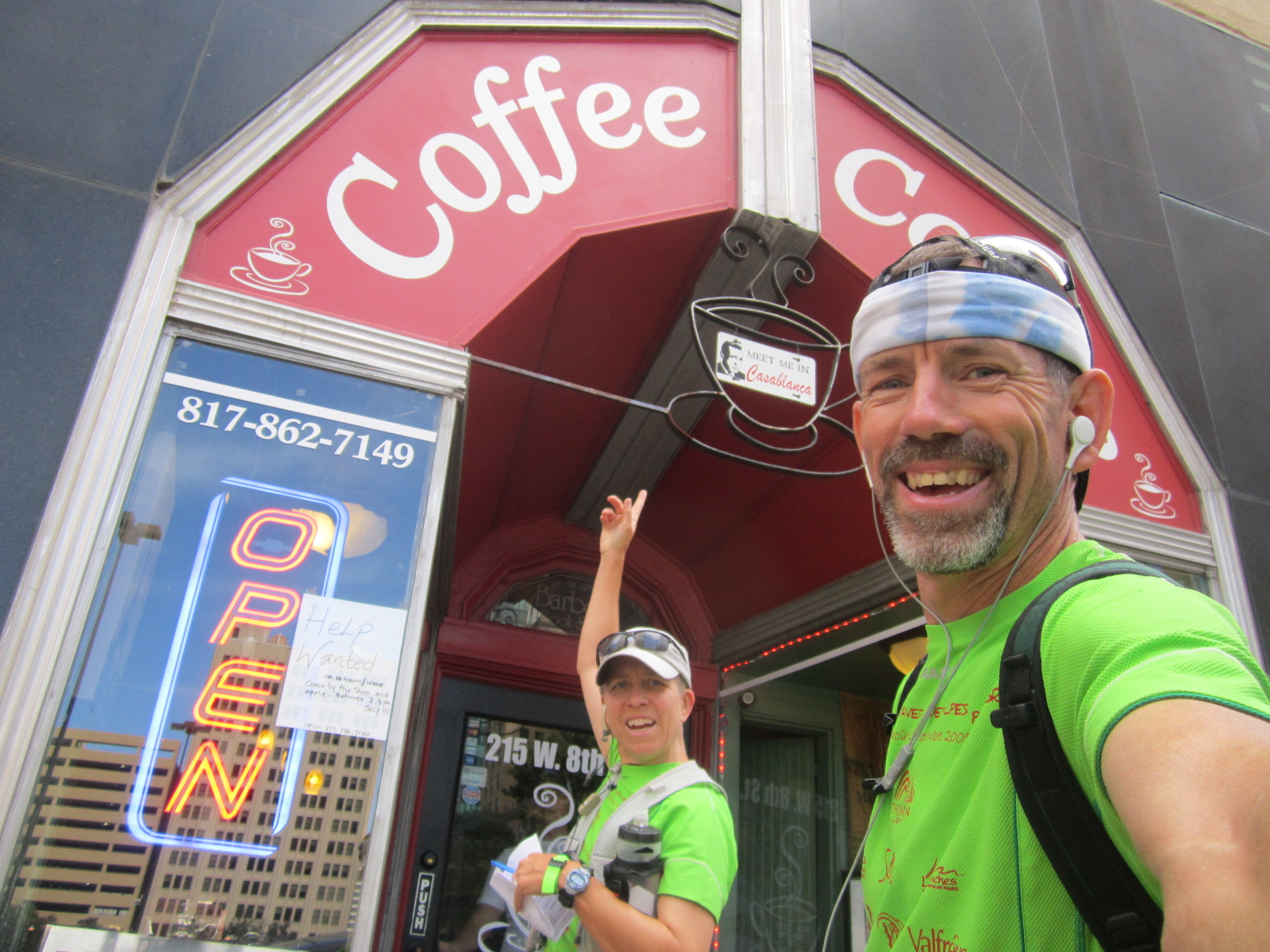 And at an interesting piece of artwork: 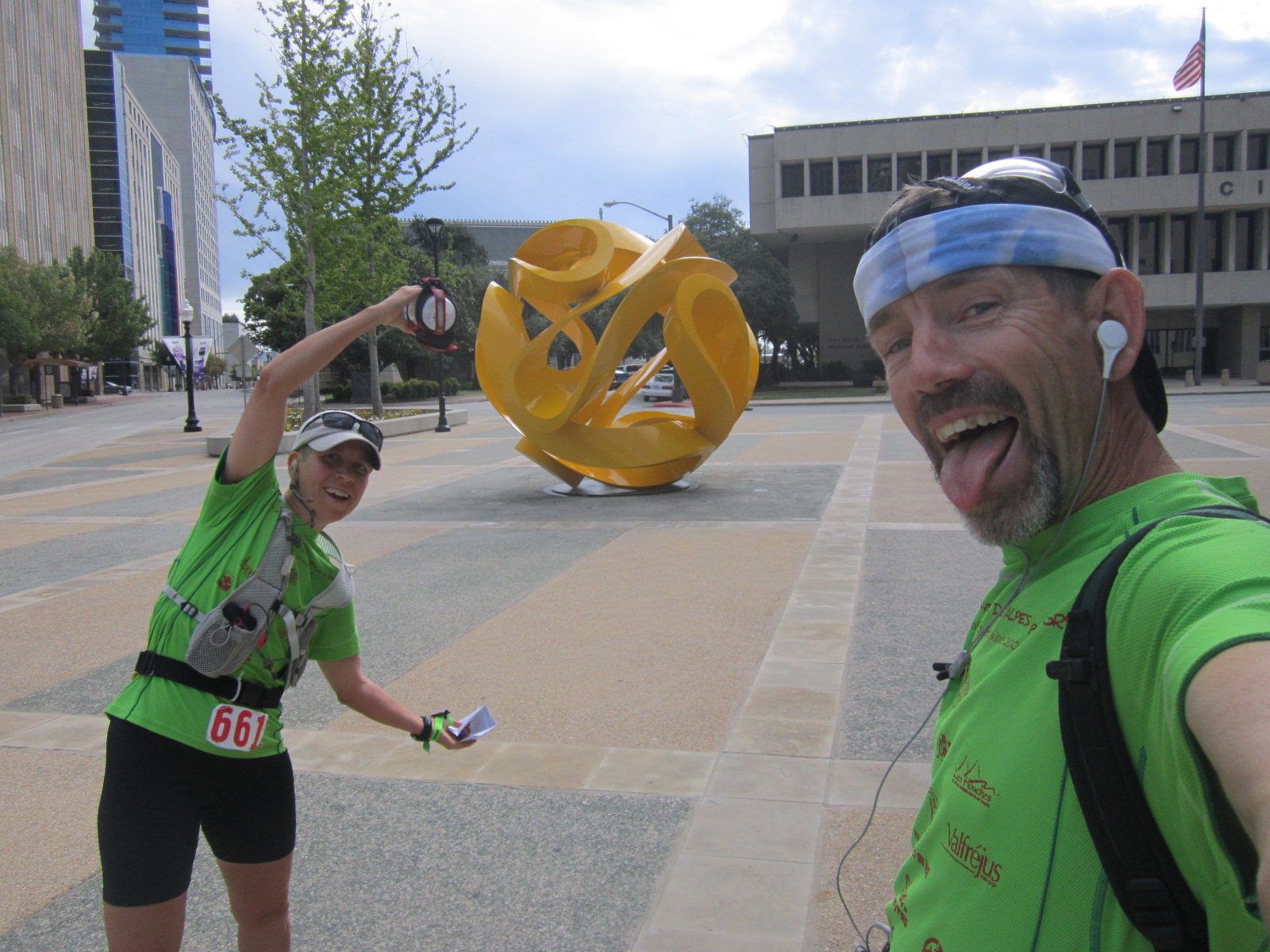 Which way is True North, Dave? 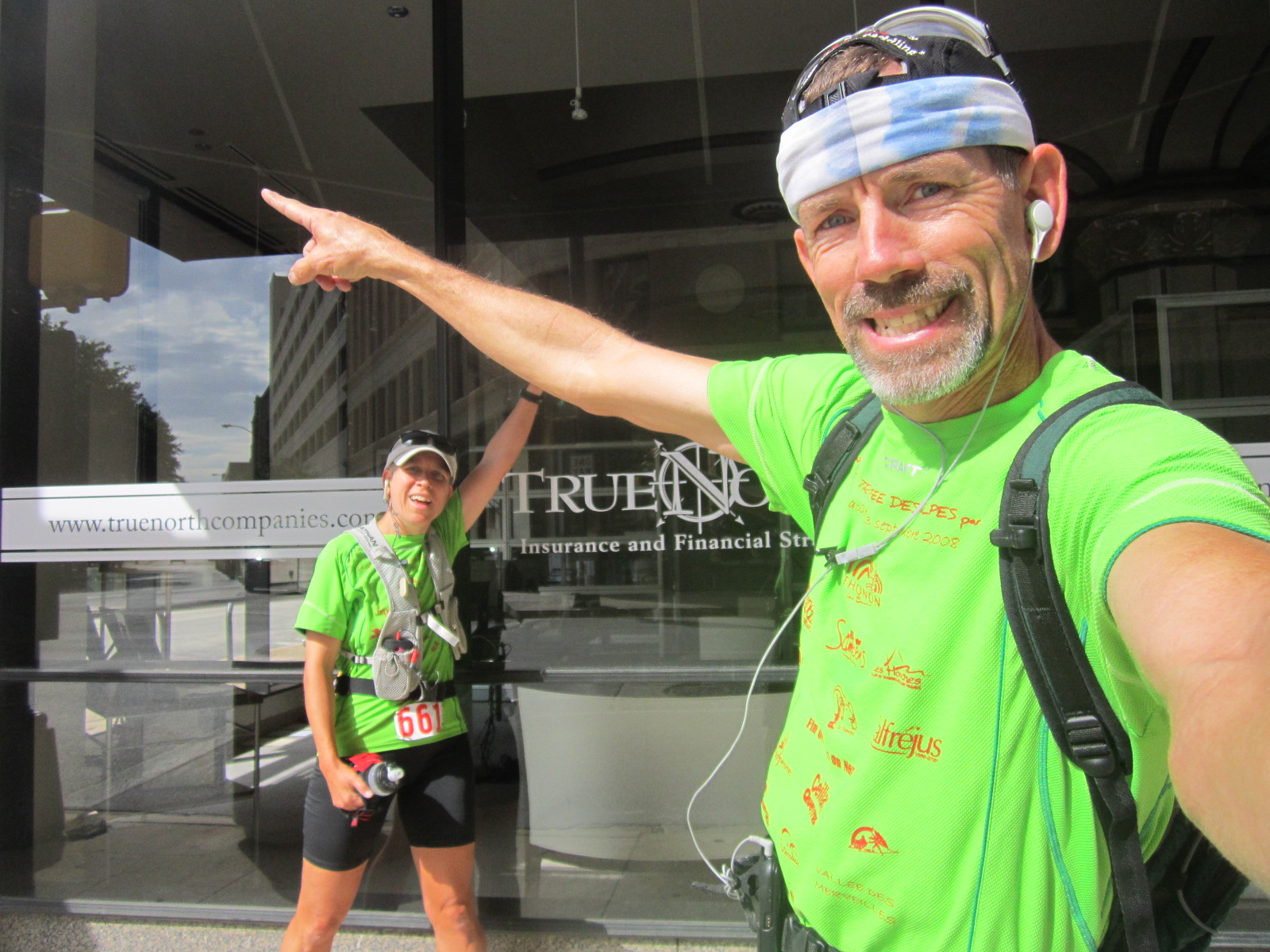 A Brand Inspector, and a couple of the odder faces we have ever made (remind me not to do that again): 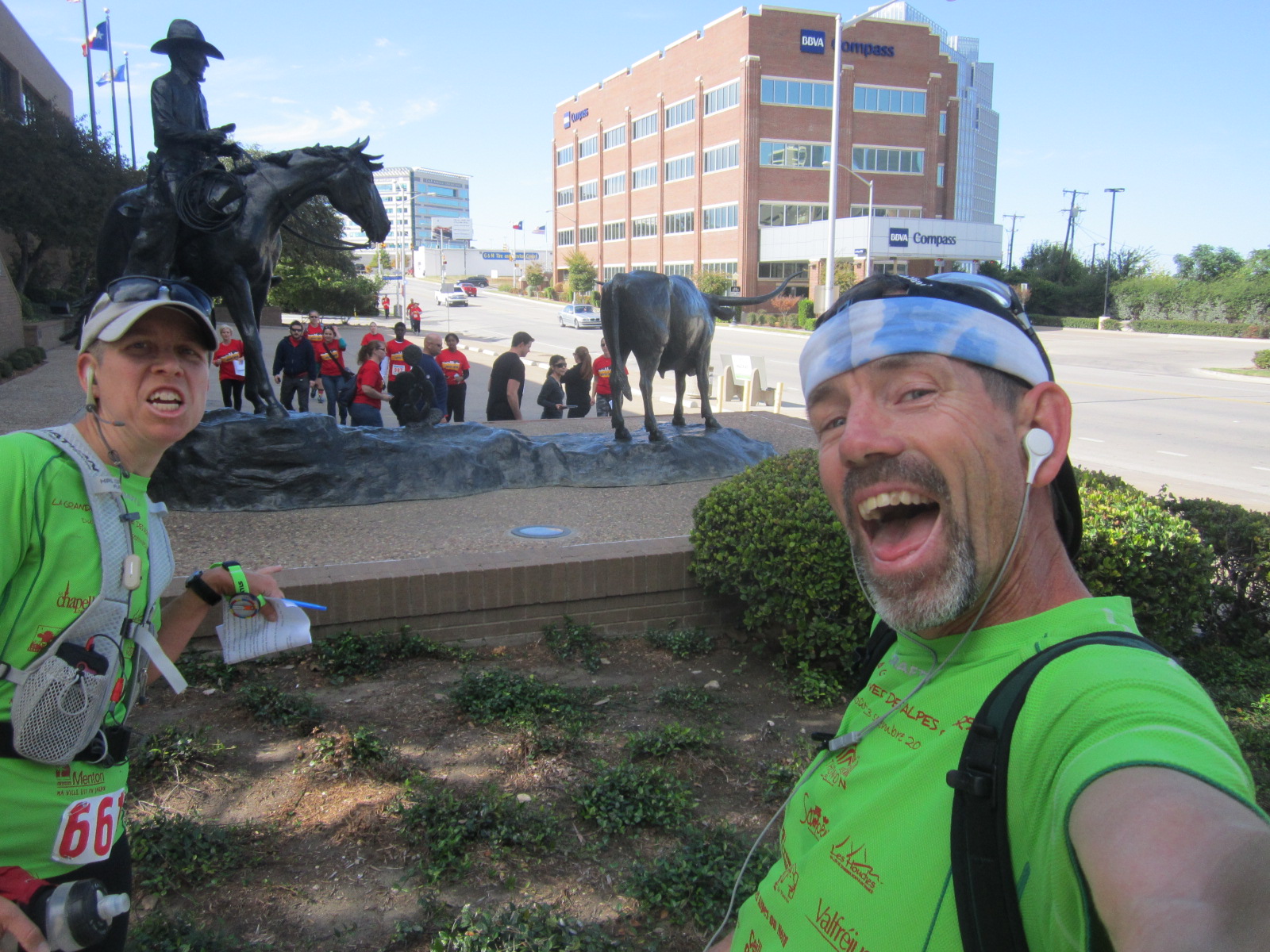 Finishing up with the (Fabulous) Baker Brothers: 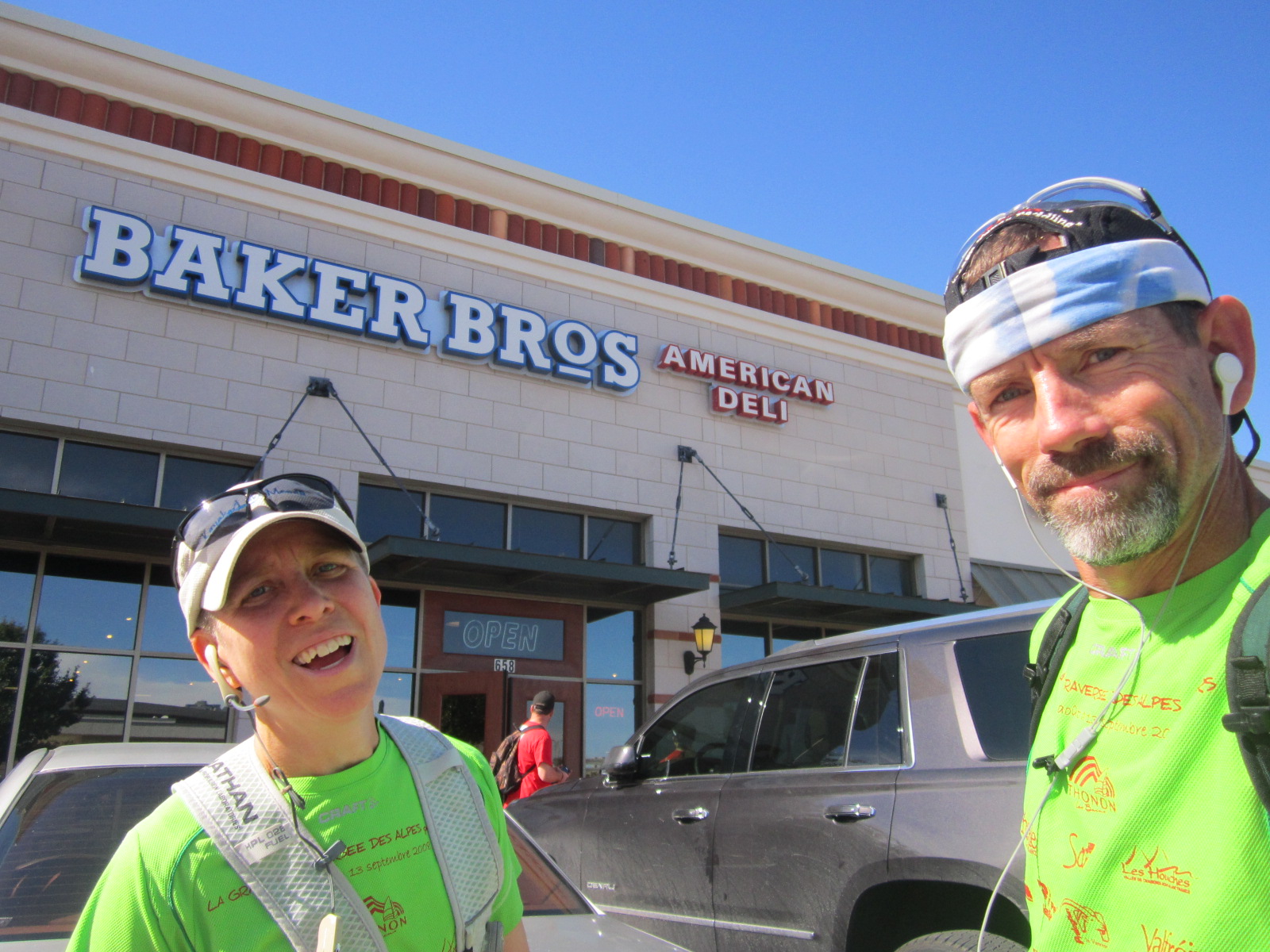 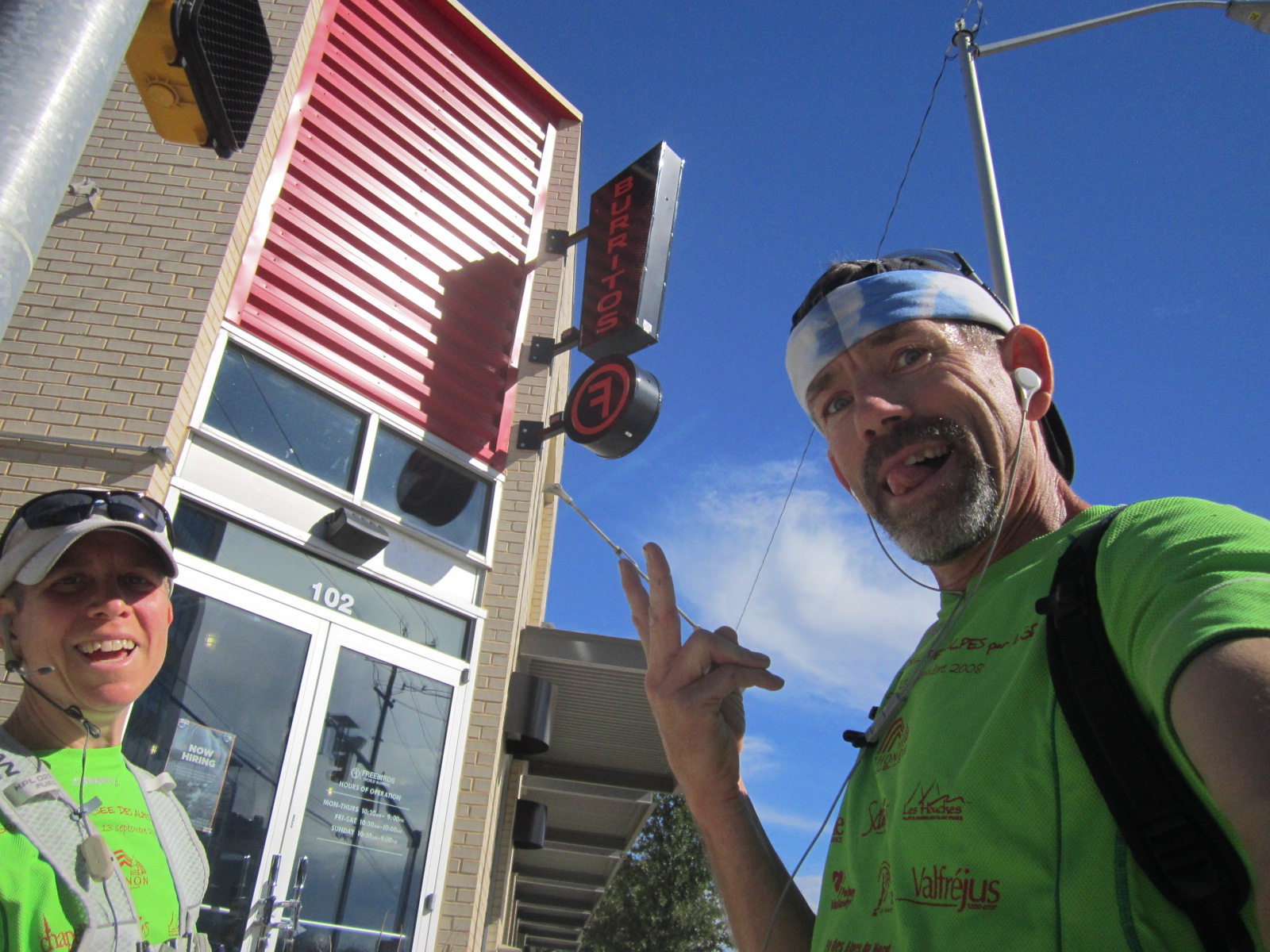 On the way to the finish we finally found some purple people who were TCU (not Kansas) fans and they agreed to pose with us.  Apparently they were popular with other teams today too.  Thank you! 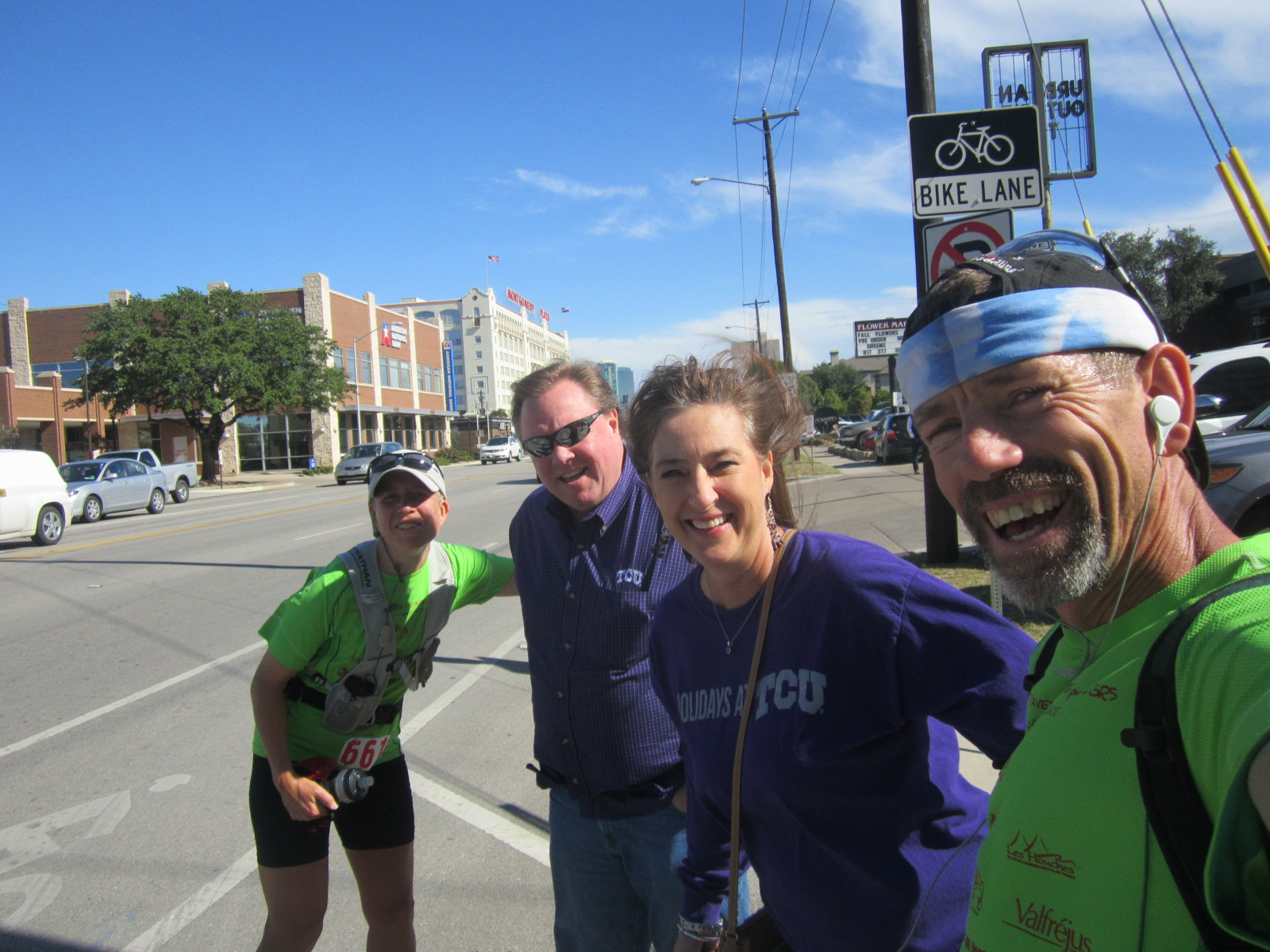 Back to the finish, first ones there, photos are good!  An excellent run around town, thank you race director Kevin!