It was quite an "ocean" day yesterday, at least bookended with ocean experiences.

Starting with a sunrise paddle with the Maui Canoe Club.  I am so glad to have the opportunity to experience outrigger canoe paddling, and I'm so impressed with the Maui Canoe Club.  They make it easy for beginners to try it, you get a nice workout to start the day, and if you go at the right time of year you might even see whales!  Or turtles or flying fish... or at least a lot of lovely scenery.

Here's a shot of a double canoe like I was in last week: 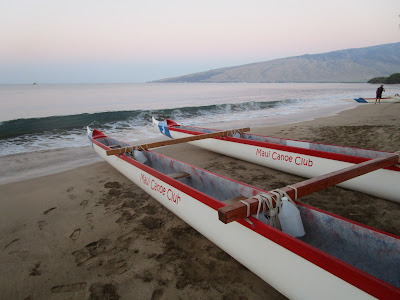 Yesterday I paddled in a single, with an outrigger.  It seemed plenty stable, but I hear it's easy to tip one over if everyone leans to the right at the same time.  I kept the camera in a waterproof bag except when we stopped.  So far no dunkings... 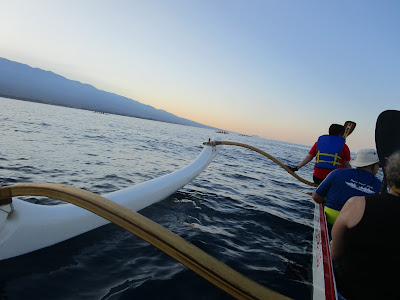 A view of the wind turbines and another canoe across the water.  Also a darker area of land where there was a fire a couple weeks ago (John saw it while driving back from Lahaina for work): 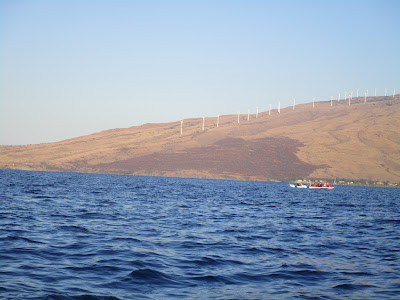 During most of the paddle we saw whales but only from a distance.  On our way back we got lucky! 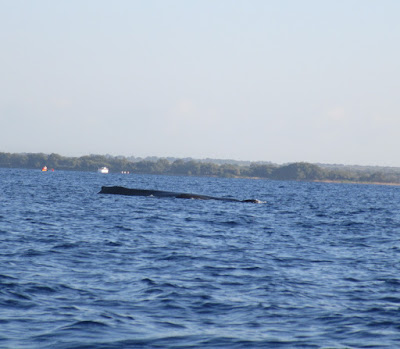 Now this is the way to go whale watching: 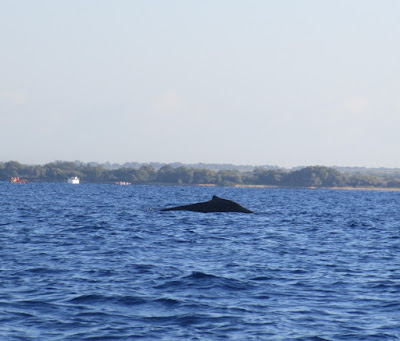 People in the boat were guessing that it was a mom pushing along a newborn, going slowly and staying near the surface.  Very cool. 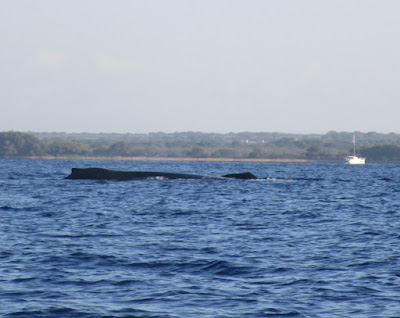 Then a juvenile whale started doing leaps out of the water, up and splash, up and splash.  Dang it for not having the camera out still.

Thank you whales, that was awesome!

After John got off work that afternoon we went to see if we could do some more ocean spectating, this time in the form of huge waves on the north shore.  It's a spot called "Jaws" where the ocean topography is such that when there's a surf advisory, huge waves tend to form, funneling in toward shore.  And surfers head out to play.

It was a fun little 4WD road down to a big gathering of folks with the same idea, watching the amazingness of the waves and the surfers.  I realized too late that I had neglected to bring both the binoculars and the good camera.  Well, it's not a good camera like a bunch of folks had, but it's better than the one on my phone.

Phone photos will have to do.  There's a little speck of a guy on the left side of this wave: 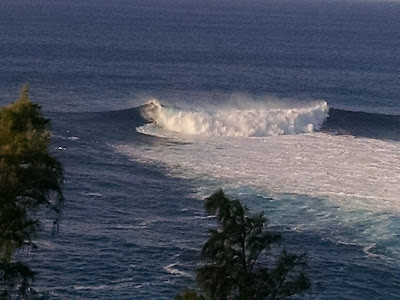 Big wave rising up and starting to form: 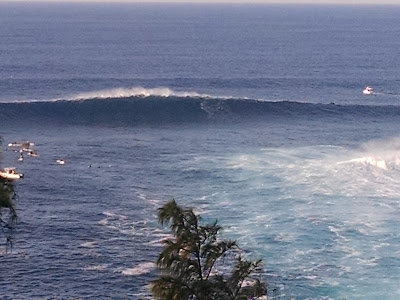 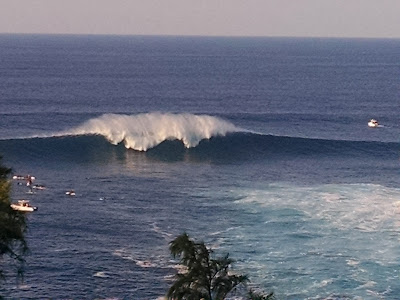 And crash!  Even though we were pretty far away, up on the cliffs watching, it was still loud: 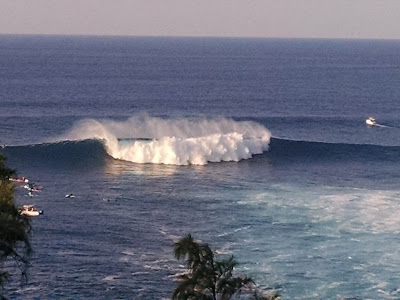 I cannot begin to figure out how to impart just how ridiculously amazing/crazy this was and how large the waves actually were.

This happened at Jaws in January and made national news (quick little Vine video):
https://vine.co/v/i5Z9O3atJLd

And I just spent 7+ minutes mesmerized by a better view of the action (also taken back in January):
https://www.youtube.com/watch?v=nGVwrx1Yp8M

Well, that was quite a day.