I happened upon a timed race in Adelaide that fit into our Australia travel schedule.  The long version was 24 hours, more than I've ever run in a fixed time event, and this seemed like a good training event for Big Dog later this year.  John wisely opted for the 6-hour version and probably enjoyed even more volunteering with the course take-down on Sunday.

The 6- and 12-hour runners started in the wee hours on Saturday (well, it wasn't THAT early but July is winter in Australia so it wasn't light out yet).  I watched the start and went back to the Jucy for a nap.

John was so "not serious" about the whole thing that he didn't bother to start on time.  Here he is getting going a few seconds later, and I'm pretty sure he still has his winter jacket on (that "winter" thing and all): 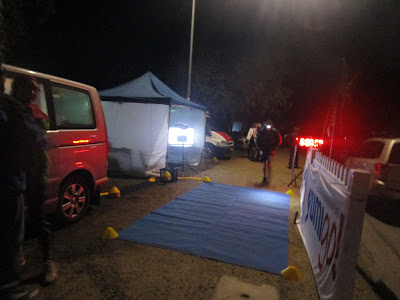 View from my seat in the Jucy, with a nice sightline right alongside the course.  Looking good, John!  I see you found some coffee, excellent: 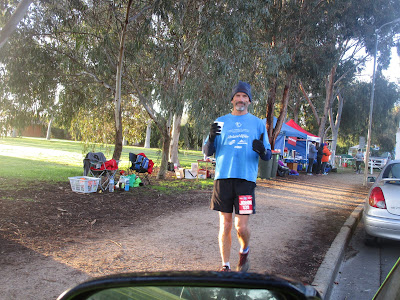 John found a groove, ran for several hours, and decided "good enough!"  The beauty of a timed race, you can get whatever you want/need out of it and you get credit for every kilometer you complete.

The group of crazy 24-hour racers getting ready to start in the gray morning: 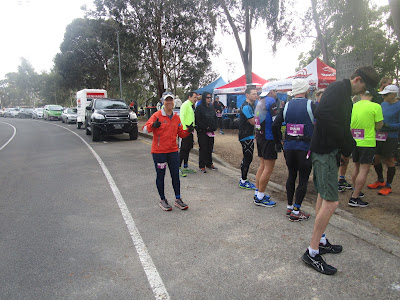 At least it wasn't raining (yet) - apparently 2015 was a very wet year, so no one was complaining about the dreary clouds on Saturday morning.

Running past the table where they were setting up the "where I stopped" flags for the 6-hour racers (the race organizers would measure the distance to each one to get an official total distance for every runner): 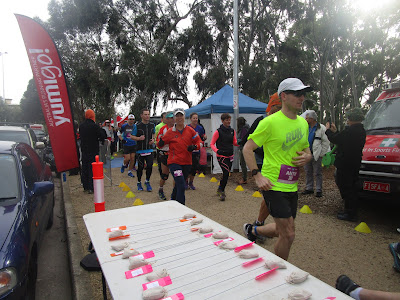 The course was a really nice 2.2 kilometer loop on crushed gravel, the perfect surface in my opinion.  It followed the perimeter of a section of parkland which provided entertainment during the day (people using the various playing fields).  Nice trees, not too much traffic around us, and a zoo across the way with a morning serenade from the monkeys - I assume those were monkeys, but I've since learned that kookaburras sound an awful lot like simians so who knows.

I started slowly, with a pacing plan to mimic the Big Dog, and soon most of the 24-hour runners were somewhere on the loop ahead of me.  Hi John, doing good so far! 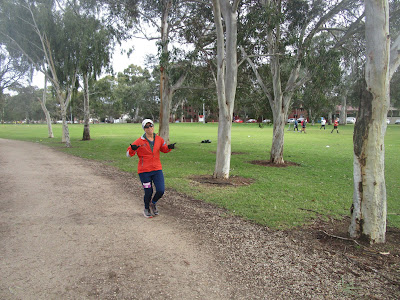 I ran/walked 3 loops, paused for a snack, then repeated that a few times.  The loop had a slight uphill in the middle, shorter/steeper in one direction and longer/more gradual in the other.  We ran in one direction for 3 hours and then switched (clockwise and "anticlockwise").  In the first half of the race I preferred walking up the steeper side and running down the long gentle pseudo-descent.

Yeah, it's not much of a hill, but we had plenty of time to experience it over and over and analyze it.  The guy in front of me was taking his dog for a run around a lap or two: 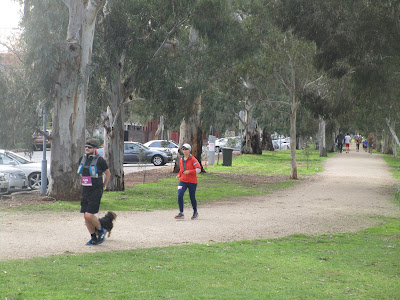 John snapped a few photos and then went for a walk (see the prior post).  I spent the afternoon watching all the goings-on in the park.  The most interesting was the Australian Rules Football game, lots of mud and yelling and running and football action.  I would have had to stop to watch if I had a shot at figuring out the game.

On the next field over people were practicing archery.  Shooting arrows at targets, then walking up to the target to have a discussion.  That was cool.

Soccer on another field (and the restroom next to it was open during the day, very helpful).  A woman using the workout stations.  Lots of people out for a walk or a run.  Birds, lots of birds, loud birds.

John got some bird photos as he was strolling around.  I believe this is a butcherbird, although there are magpies in Australia with similar coloring so it could be that instead: 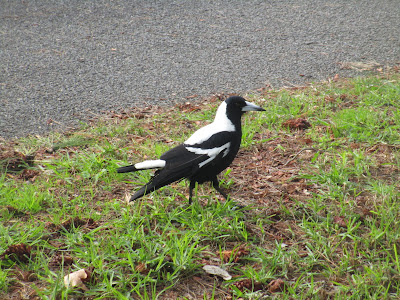 Funny little "angry bird", maybe a parrot (all over the country we saw parrots, parakeets, Rainbow Lorikeets, and who knows what else, lots of bright colors!): 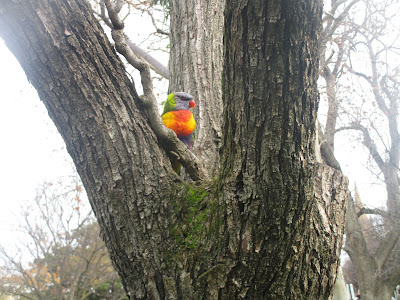 And the ever-present Running Marcy Bird in her native habitat of "the other side of that tree": 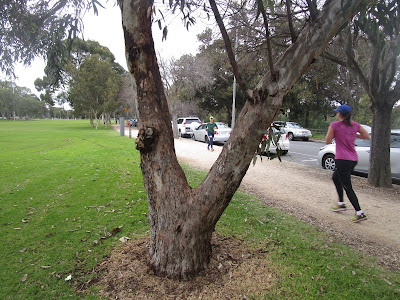 Not sure what this pose is about, although the operative word is probably supposed to be "running": 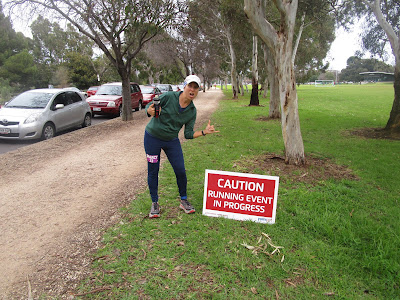 Jucy in Adelaide (or - another excuse to pause for a moment): 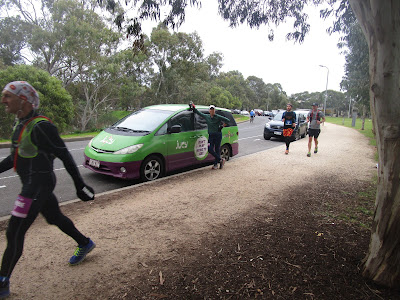 And so it continued on.  I was feeling pretty good and getting in my 3 laps well under an hour each time.  I made up the extra lap I needed in order to hit 100 miles in 24 hours, basically the goal I came in with.  For a while I started wondering if hey, maybe I could set a PR for 100 miles?  That actually got me too excited and I had to work on calming the heck down.  I hit 12 sets of 3 laps in well under 12 hours.

Then my legs got tired.  Time to stop being so calm and start working on what to do.  I took a couple slow laps to regroup, and somewhere around here it started raining off and on.  The 6- and 12-hour races were long over so the race director let us move my box and chair (thank you to the volunteer who loaned us a chair!) into a big tent.  That made it a lot easier to drink some SPIZ, work with clothing swaps, and sit for a couple minutes.

John tried to take a photo of me in the tent once but the flash was turned off - probably for the best: 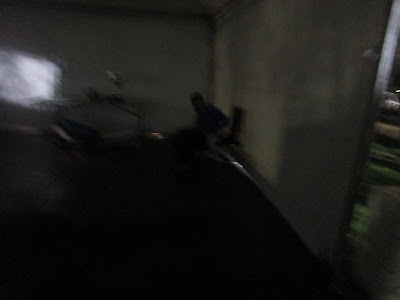 I decided to try one ibuprofen, which isn't something I normally take.  In this case, the course was a lot flatter than I'm used to and I was using basically the same muscles the whole time instead of the usual climb/descend/rock hop variation.  Well, it worked marvelously.  I switched to walking with running breaks instead of vice versa, and overall I was able to keep moving well enough.

Funny thing was that I started to prefer the other direction with the long gradual climb because it was easier to speed-walk up it instead of feeling like I should be running the whole way down.

Each time I passed the aid station tent the nurse asked how I was feeling and was I "still weeing?" - weeing?  Is that an Australian thing or is she an elementary school nurse?  A more common question was "How you going?" or "How going?" and we were slowly coming up to speed on the nuances of this language.

My lap times were certainly slower, closer to 1 hour not including the quick break.  That made me focus more on keeping the break short and speed-walking instead of just ambling along.  Math kept me entertained.  How much leeway do I have?  How about now?  How much room do I have to slow down and still make 100 miles?

At one point I realized I was going off my memory on how many laps I needed to reach 100 miles.  The stopping points for various distances were marked (very nice), but I wasn't completely certain about the # of laps up to that point.  I asked John to find out for sure, along with the mile-to-kilometer conversion that was involved.  Would hate to get that wrong and miss the goal by a lap!

Rain, rain, more rain.  No downpours, just a constant wet.  My jacket worked for the most part, the tights kept my legs warm, there weren't too many puddles on the trail, so I just kept moving.  Eventually I turned on the iPod and time moved along nicely.  The field thinned as people stopped or paused, and eventually it was super quiet.

Every 3 hours we'd turn around and greet people going the other direction - that was great!  Many of us saw it as a treat and broke out of our quiet shells to say "Good job!" to everyone else.  Lots of camaraderie when running in the rain in the dark.  Bunch of crazy people.  I loved it.

Each time we crossed the lap line our chip was recorded and on the screen we could see our lap time, placing, etc.  It took a few times around to figure out what all the numbers meant, so that was fun.  I couldn't see the screen easily when going in the clockwise direction, so I decided it would best if I just forgot about it until we turned around to go anticlockwise again.  Being out on the course all night I managed to move up a few places, more motivation to keep moving.

Towards morning my legs suddenly got stiff and my brain turned a bit negative.  Oh right, the ibu must be wearing off.  It took one slow lap to figure that out.  I took one more and got back up to speed.  A very interesting experiment.  I'm so not a fan of relying on anything like that, so you can be sure any future use will be in much moderation.

Dawn.  More runners back on the course.  Less rain.  I still have some leeway, but not a lot.  Calculations kept my brain active and slightly fretting kept me moving.

John was back out on the course with the camera - another example of the birds in the area, along with mileage markings (the white ones were every 100 meters and this is #4 of 21 around the loop): 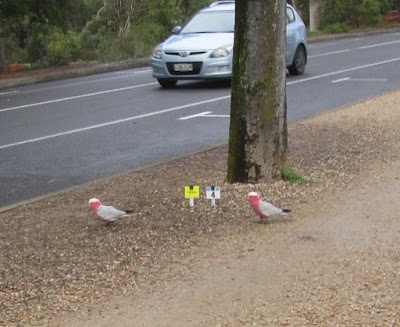 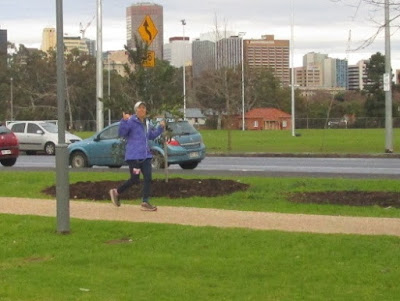 John came with me for the last couple laps.  I finally knew I was going to make it to 100 miles.  I was sort of in a race with a guy named William for 10th place, but he was running too well (after taking a break) and I didn't feel like duking it out.  My legs were back to "when are we stopping??" mode by this point.  Without my realizing it, William and I both passed the kilometer total of another runner (Cameron) who had left earlier, so I got 10th place anyway.  Sweet! 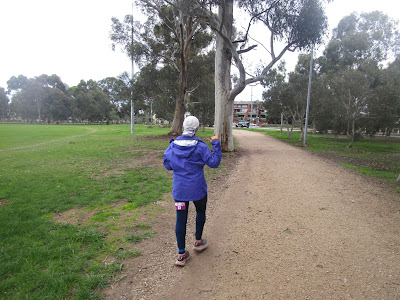 I got to carry a "where I stopped" flag during the last lap, and John walked with me up the little hill to the 100-mile mark.  Here it is, I made it! 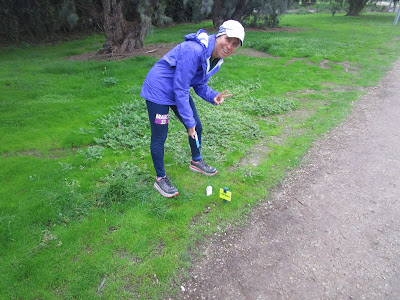 I guess I might as well keep walking, I have a few more minutes.  I made it as far as this tree when the horn sounded: 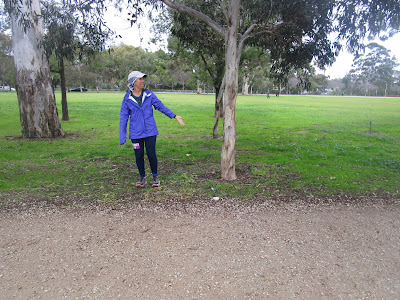 A nice hug at the awards ceremony - along with a nice bottle of wine  :) 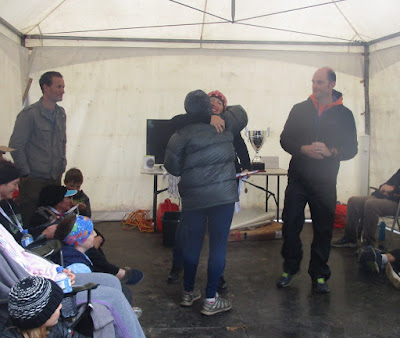 Apparently they give speeches at awards ceremonies here, um, OK, I cobbled something together on the fly and hopefully it was somewhat coherent.  I'm guessing John would be a lot less motivated to win races if we lived here. 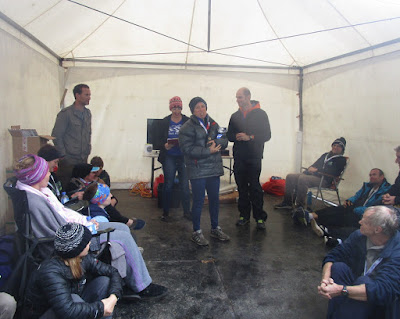 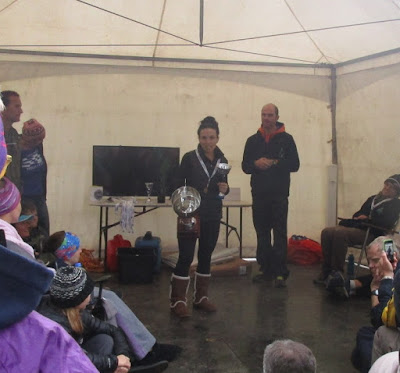 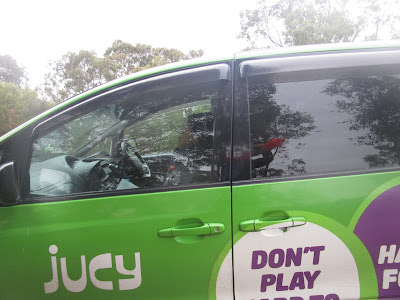 Fun race!  Thank you to the race director, all the volunteers, and of course to John for putting up with these crazy ideas of mine.