Another in the series of "Random photos around Austin" - more new things to see!  And a few old ones to revisit.

Here's a completely new one - riding bikes on the Circuit of the Americas Formula 1 racetrack, now that was super cool!  Thank you to our friend Kurt for setting up a group outing.  Once a week in the spring they open up the track to cyclists, and we were pretty excited to get a chance to ride somewhere we never expected to be. 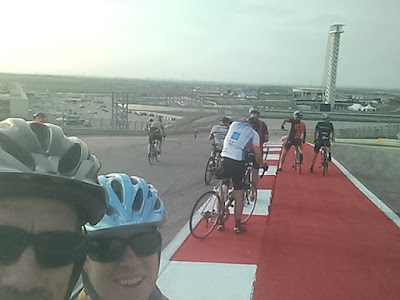 Through the grandstand area (I don't really know what you call this, not being a racecar person, so I'm just equating it to a horse track and hoping for the best): 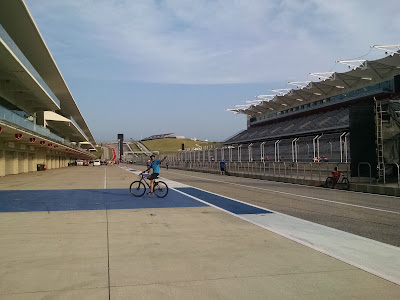 Riding by the tall "diving board" tower where I assume they watch/film the races: 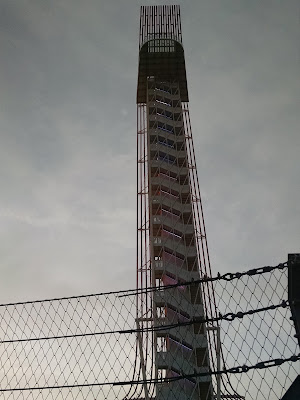 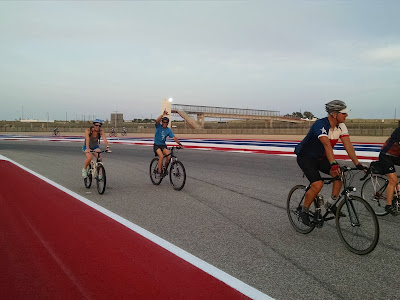 So that was the easy ride.  Lots of fun.

The hard ride was a solo effort.  It really had to be solo, because pretty much no one my (slower) speed wants to ride this far and no one that can ride this many miles wants to wait for me at the top and bottom of every hill and through every break.  The challenge was Loop #2 of the Tour das Hugel course.  I had previously ridden Loop #1 (the first 1/3 of the course) and it kicked my butt.  The second part is twice as long with twice as many hills.  Many of them are steep.  Thankfully not all of them are steep.

Here I am at the bottom of one of the steepest ones - and maybe Ladera Norte by itself isn't too bad (I honestly don't remember, it has been many years), but the detour to Smokey Valley to get partway up is ridiculous.  This was the only hill where I used the switchback method to keep from walking.  And I'm on a mountain bike - there are some seriously strong road cyclists out there.  The smile just means I didn't know what was coming! 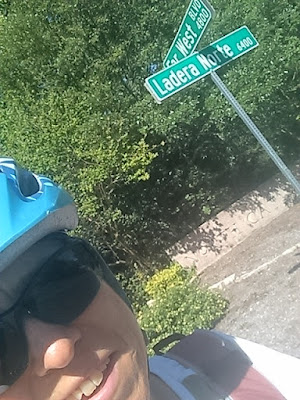 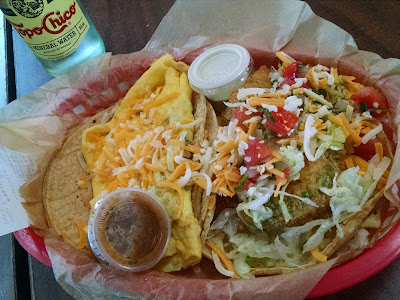 I approached the day assuming that I wouldn't finish the whole loop, but every section was one that I wouldn't be repeating again later when I came back to complete the task.  That was by far the best way to break it down into manageable segments.

The loop around Bluegrass/Lost Horizon/Rain Creek was very nice, a new neighborhood for me.  Celebration with a snack at Trader Joe's - also something new for me (the yogurt, not TJ's), again, yum: 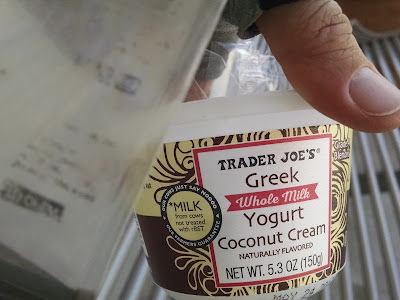 Back to an area I'm too familiar with - up Beauford and down Jester.  At least there's a lovely view of Austin from here: 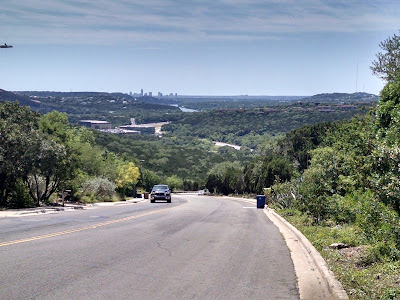 Courtyard hill, not too bad, oh wait, OK, that was some work at the top.  I liked learning about the connection from City Park Road over to Big View/River Place, very nice.  A statue on the loop around by the Oasis, inspired by the "riding" theme: 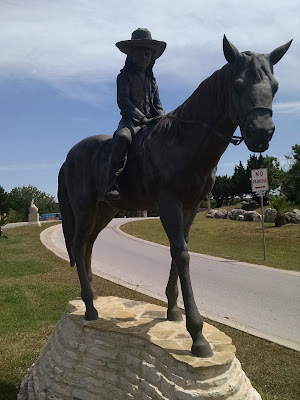 To the far end of the course - down 620 to the river - I'm pretty sure I have time for this.  My favorite Facebook comment of the day was when I posted this photo with "There's only one possible caption for this" and Kurt wrote, "DARN, I can't think of a caption": 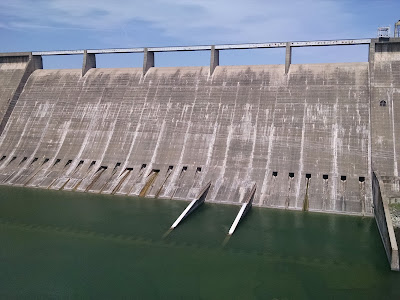 Another break, this time at the Coffee Bean & Tea Leaf (you'll just have to guess at how many times I stopped overall, I ain't telling), then back up the hill.  Yay for making it to the dam and back!

Yes, the course DOES go down/up River Place Boulevard AGAIN (I was not surprised, just a bit resigned), and THEN down to the bottom of Big View and back up.  Phew.  Another short break to recover... 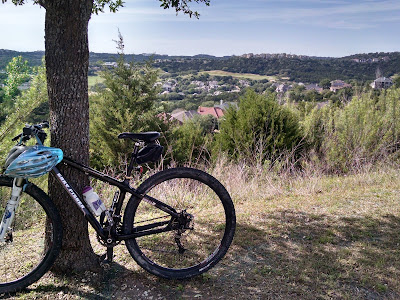 Well, I might as well finish it up now!  Even though that means climbing Jester at the end of a long day (that seems rather cruel).  Good thing the market was still open at the bottom.  OK, let's do this... 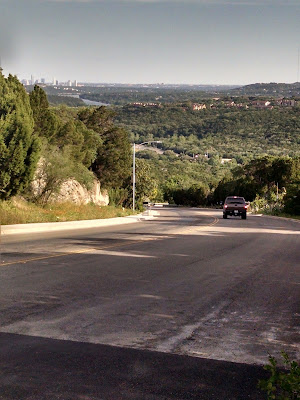 Happily, the ride back along 360 was like a cooldown.  Still hilly, but long, gentle hills that I could slowly spin up and not even use my lowest gear for once.  And at least I realized that Bruegger's was going to be closed by the time I got there, so I wasn't standing in front of it when the "no bagel for you" disappointment hit.  As a consolation I stopped at Trader Joe's downtown - and John picked me up there, bonus!!  Thanks John  :)

On another day, while running into town, this caught my eye: 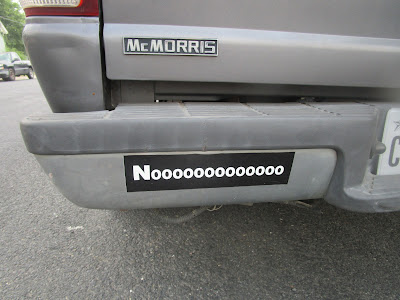 I was on my way to briefly visit Eeyore's Birthday Party - I haven't been in forever.  Still very funky and fun.  And lots of interestingly-dressed people but I didn't want to be all rude and take pictures.  Here's Eeyore, at least: 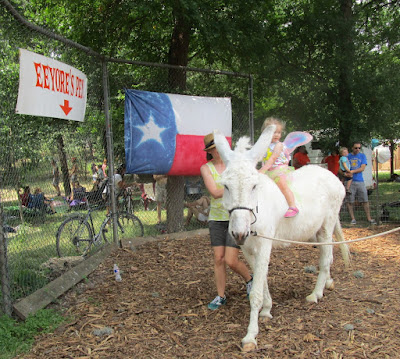 I caught one costume heading toward the party: 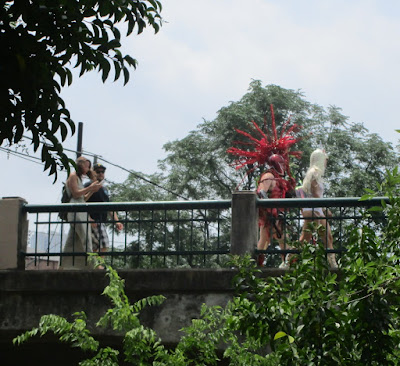 The main purpose of the day was to join the climate march at the Capitol, my first group gathering there.  I've been wanting to join a protest here all year and decided I should really make it a point to get to this one. 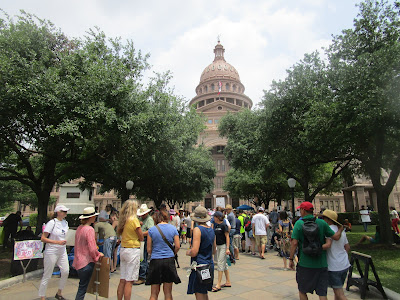 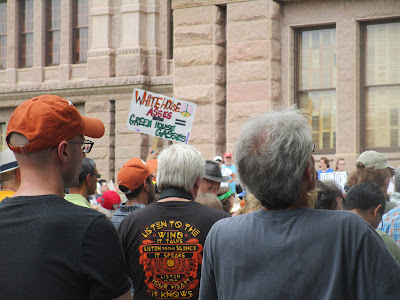 Congressman Lloyd Doggett showed up to give a speech, awesome! 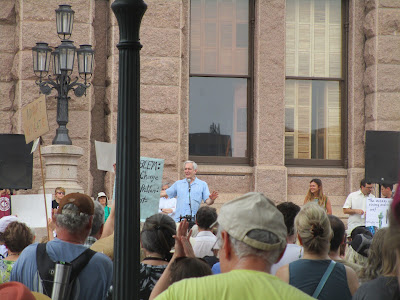 Lots of excellent signs, it was impossible to get photos of all of them, but a lot of fun to walk among them and read the creativity: 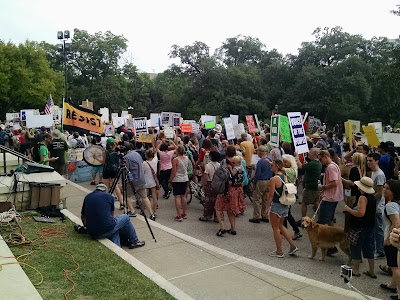 And a few costumes: Marching north out the back of the Capitol complex: 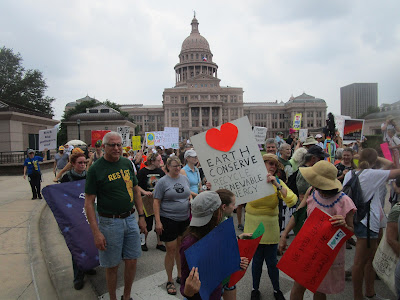 We stopped traffic on Guadalupe for a while, and I was thinking, yeesh, I hope people turned off their engines?  There's irony in causing a bunch of vehicles to idle in the name of reducing emissions... 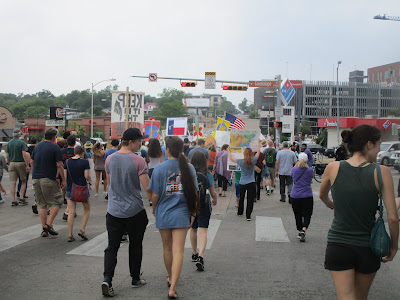 This looks like more of a longer term installation and not just there for the day? 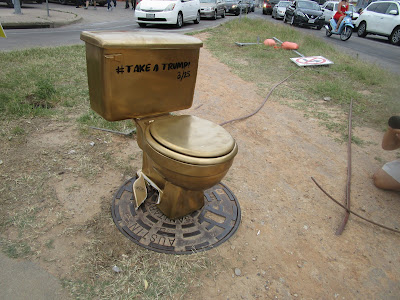 I really enjoyed the march - it was so nice being around a bunch of people with the same goals and thoughts about the future of our planet, and people who weren't afraid to speak their minds about it.  Quite inspiring.

Back to a bit of levity - can you spot the palindrome?  (also the photographer?) 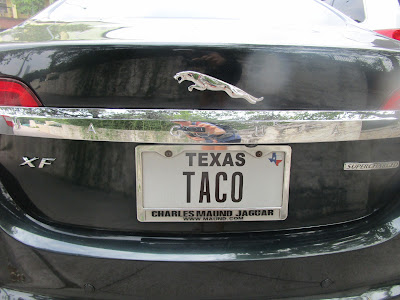 I've been meaning to photograph this colorful artwork for a while, finally passed it on foot for an easier shot: 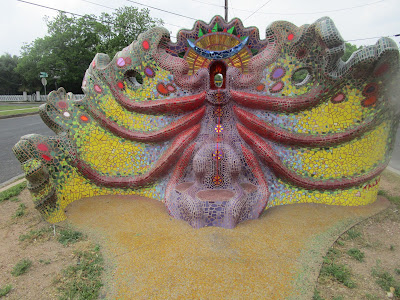 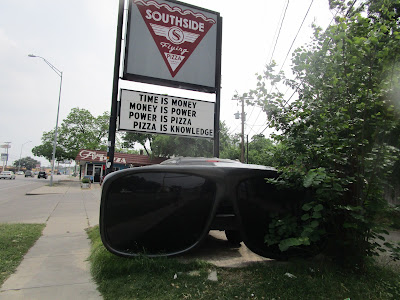 A fitting way to end the day (and this post) - a work in progress, and it looks like a good one: 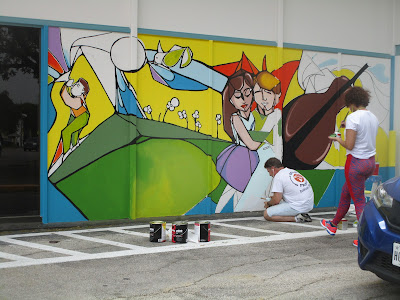