Pinnacles!  I had no idea until recently that there's a national park so close to the Bay Area.  With Mom visiting from Vermont, it seemed like the perfect time to go explore.

And what a lovely gem of a park it is.  We started with a short hike up to Bear Gulch Cave, which is a different sort of a cave than anything we had seen before.  It was created from large boulders covering a narrow gulch.  I wasn't sure that even qualifies as being a cave, but the posters in the nature center claim that yes, that counts.

An intriguing little trail up through giant rocks: 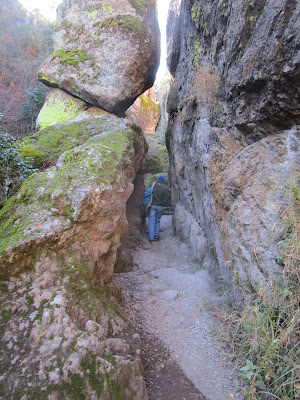 Checking out a climbing wall - with all the little rocks jutting out, it's almost like a manmade wall in a climbing gym: 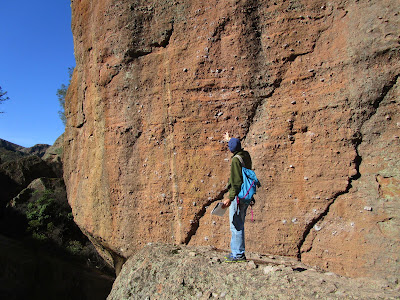 Up through the various twists and turns of the cave, popping out to this sight near the top: 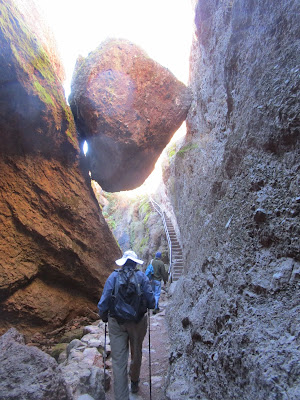 Thank you for the stairs!  The CCC built much of the infrastructure here, including the little dam at the top: 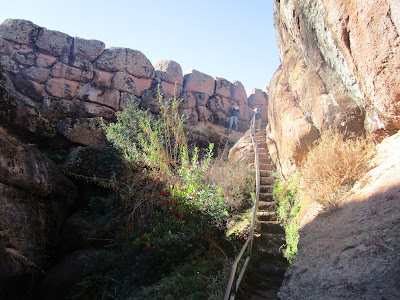 The pretty reservoir above the cave gulch: 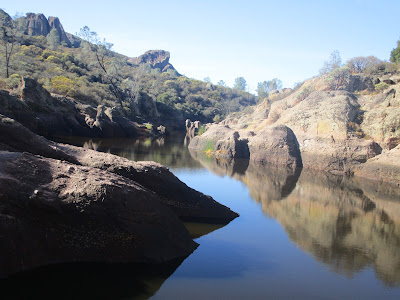 The park is named after the pinnacle and spire rock formations like these: 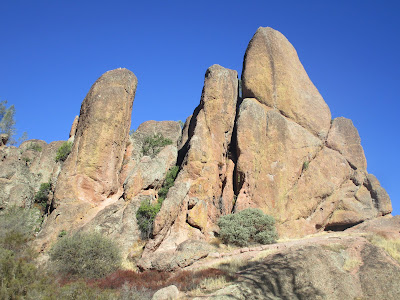 An interesting mix of gray and red through the trunk of this (manzanita?) tree - we guessed that it is partially dead: 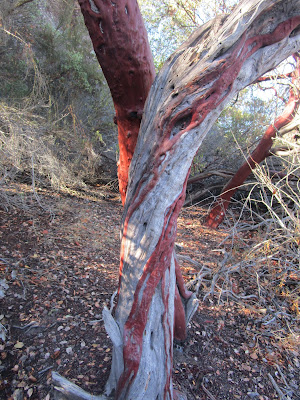 Frog rock on the ridge as we headed up the High Peaks trail: 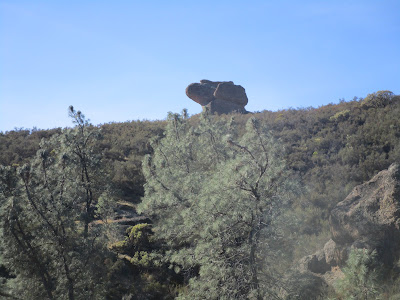 More wonderful rock formations - and here's where we saw three condors come to land!  We had seen some large birds soaring high overhead when we first arrived but didn't get a good look at them to be sure they were condors. 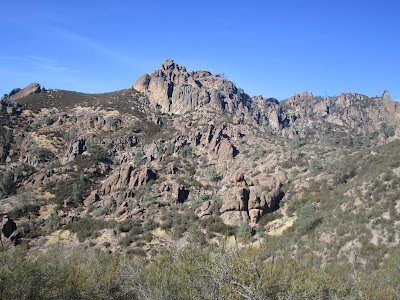 We stood for a while with binoculars, watching the birds hang out, getting a close enough look to see the red heads.  Not close enough for a good picture.  But now we were sure they were condors.  One by one, they spread their wings and flew off, very cool!  I'm so glad Mom got a good view of the condors.

I continued up and around the High Peaks trail while Mom and John backtracked to the truck.

More scenery on the other side of the ridge: 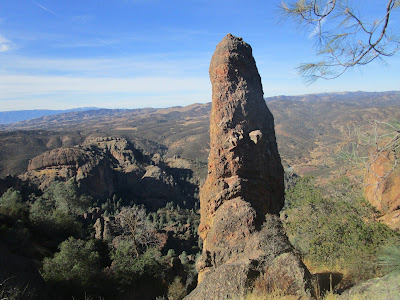 The very-cool trail winding around the high pinnacles: 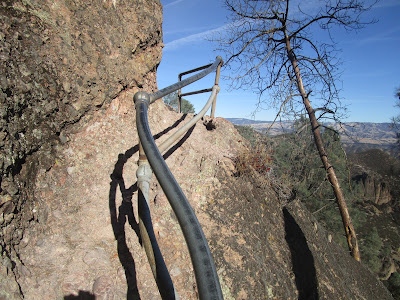 Little steps built into the rocks: 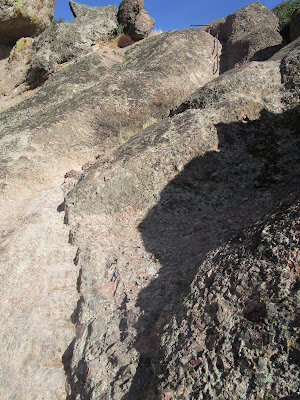 As I was taking the picture of the steps, I heard the whoosh or saw the shadow of a large bird.  Whipping around, I managed to catch a photo of a condor soaring right overhead - awesome! 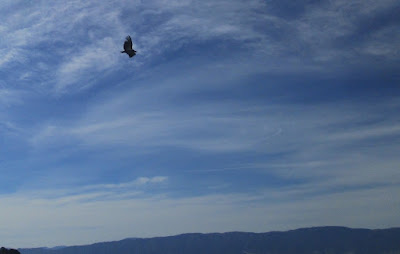 Even better - it landed on a nearby rock!  I was thrilled to get a closer look.  And my camera was finally in range: 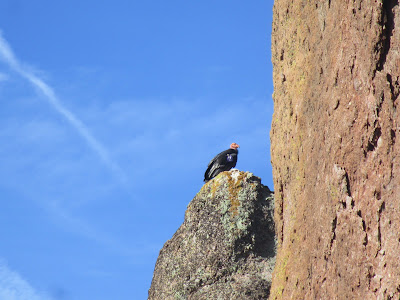 I stood for a while, watching it preen itself as I slowly zoomed in and snapped pictures: 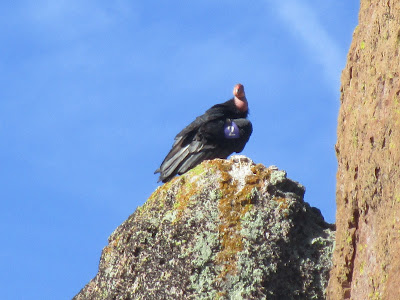 Hello, condor #2!  Thank you so much for hanging out with me.  You may be quite ugly, but you're an amazing bird. 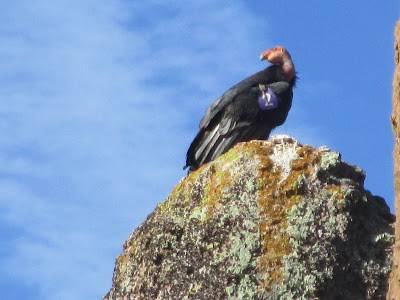 Finally I had to get moving again. 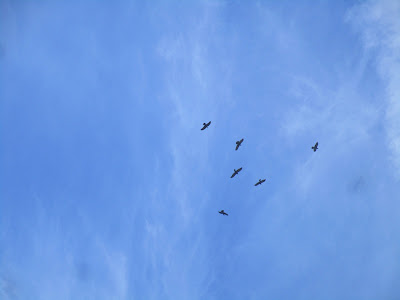 More fun on the "steep and narrow" section of the trail: 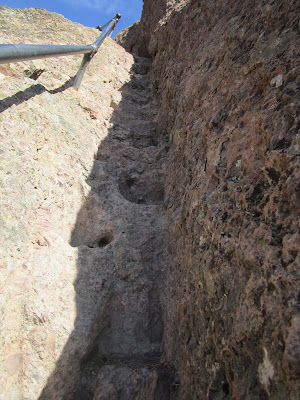 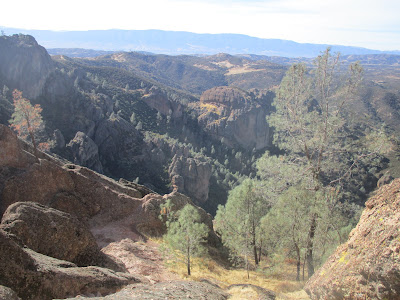 Not so much a "trail running" trail, more of an adventure: 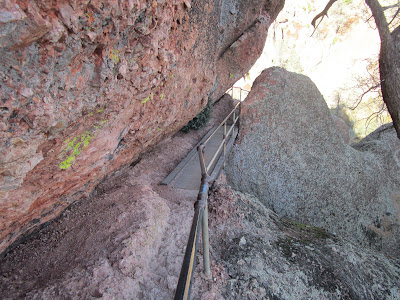 Coming down the other end of the ridge: 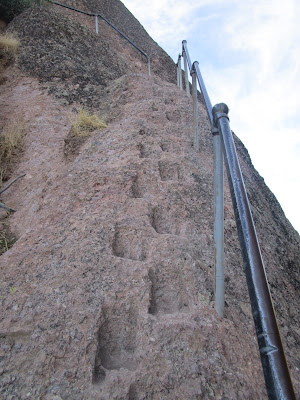 Lots of stopping and admiring the rocky views: 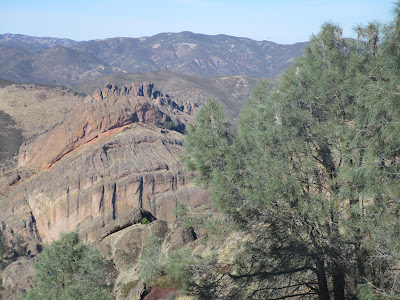 Thank you, Pinnacles, we will certainly be back.

One more bit of excitement, an excellent lunch with Kip at Google - thank you Kip! 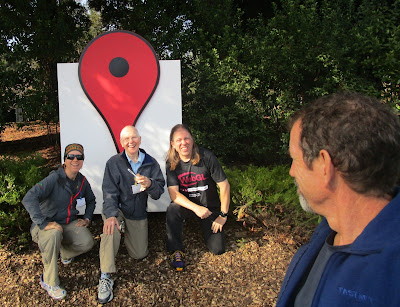