Harvest Caye (also called Risa in the Star Trek vernacular), quite lovely.  I believe Norwegian Cruise Line owns the little island off the coast of Belize, so everything is geared toward cruise passengers.  We looked forward to a bit of roam-around time and a scavenger hunt. 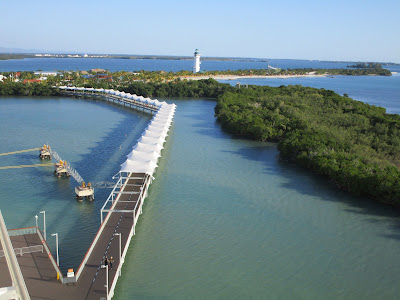 Another leisurely morning.  If it wasn't for the late nights, we'd be getting lots of sleep.  As it was, I had decided to pretend I was still on California time so I could stay awake for the midnight (and later) events.  Anyway, it was a beautiful day, let's get walking. 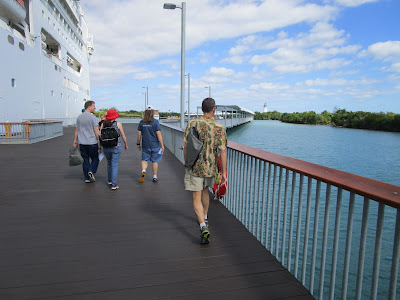 What??  The first place we walked into had a Star Trek actor on the wall, but we're pretty sure he wasn't planted there for this cruise.  Just random coincidence.  Hi Chris! 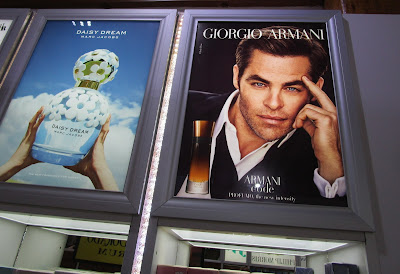 The sign says "Free chocolate samples inside" - why yes, don't mind if we do. 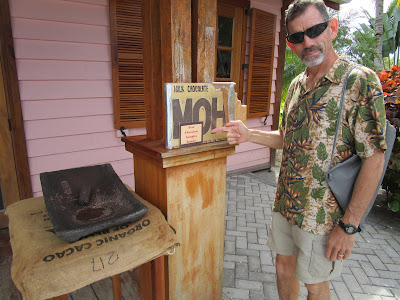 Probably less of a coincidence: 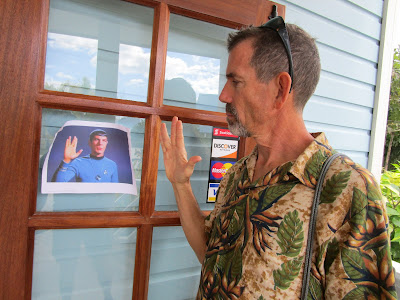 Scavenger hunt scouting and a nice place for a group photo: 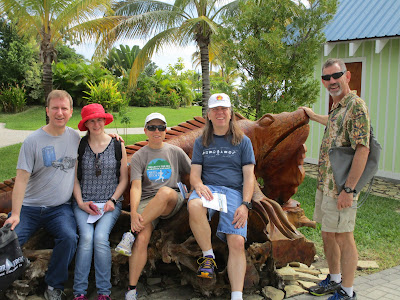 The nature center has a butterfly house, small but quite wonderful, with the highlight being the blue morpho butterflies (brown on the outside, bright blue inside): 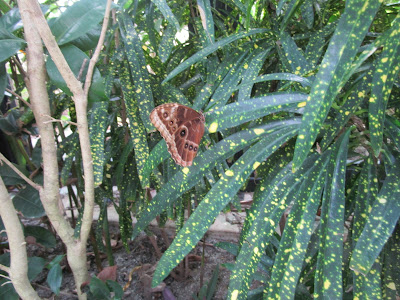 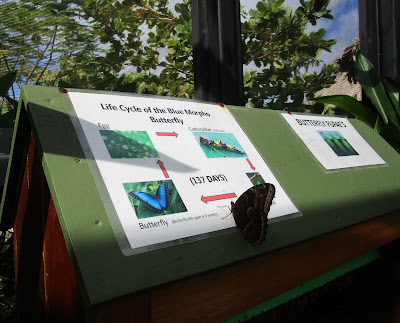 The box where they hatch: 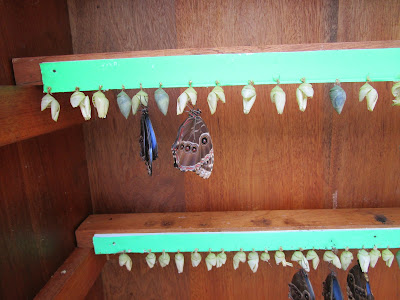 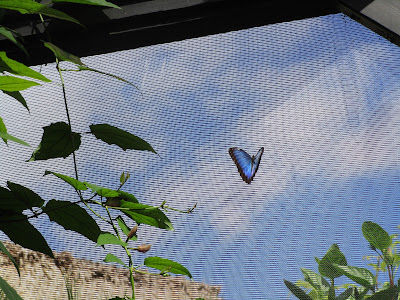 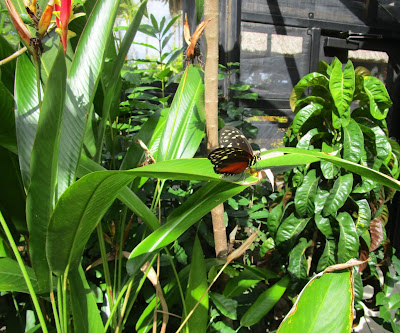 Such a picturesque island.  You can't even tell in this photo that the lighthouse is actually part of the zipline experience.  Yeah, touristy but still pretty. 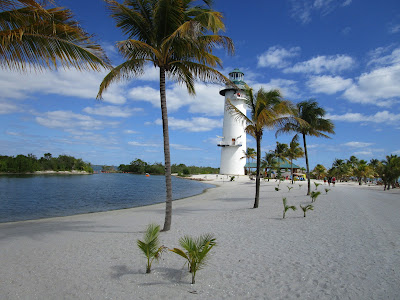 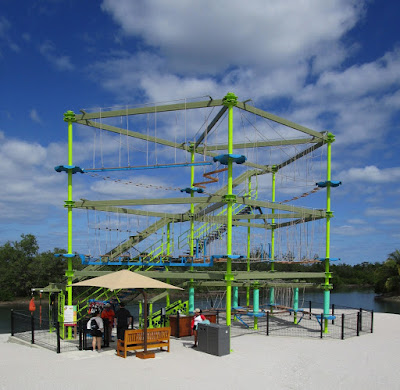 Central American lizards are quite something to see: 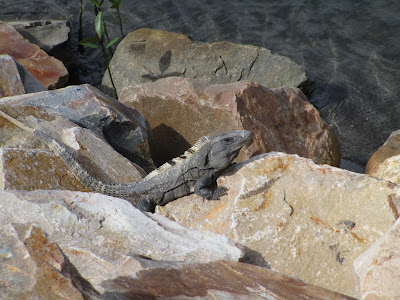 Siobhan and Rodney checking out the beach: 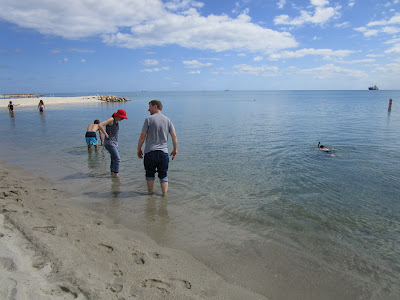 More wildlife - this one was a bit camera shy (well, I probably ran up to it too quickly), so here's a zoomed-in picture: 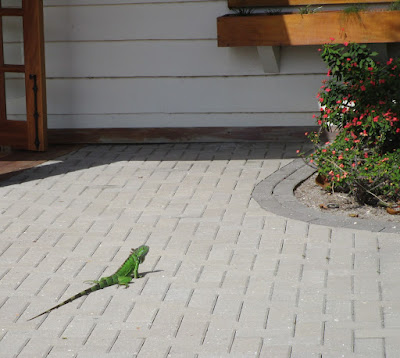 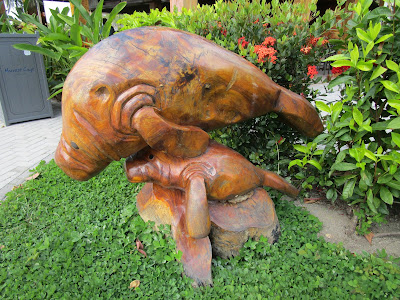 That sculpture was part of the scavenger hunt (although I can't remember how they worked Star Trek into that one), and we had done a decent job of scouting before the hunt started.  No, Chris Pine and Mr. Spock weren't part of the answers.  But we had a bead on the rest of it.  Just had to locate a few more things.  We turned in our answers and waited a couple days to find out if we got them right and who would win the random drawing from all the correct entries.

Apparently we did OK because Rodney and Siobhan won the scavenger hunt - congratulations!

Checking out the sand castle building contest - I think this is a Borg cube getting fired on by a starship (someone more "in the know" can tell me what type of ship that is): 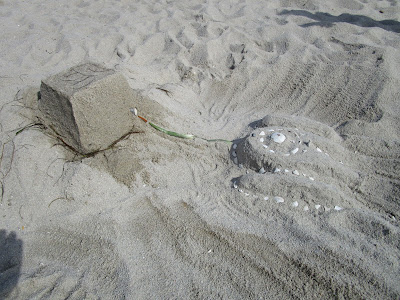 My favorite!  Awesome idea and well made. 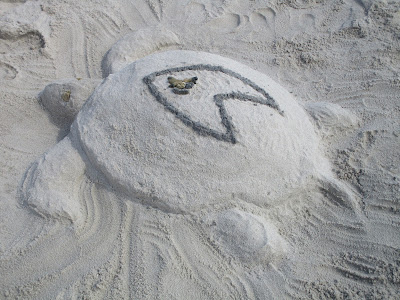 This one went for size, not bad: 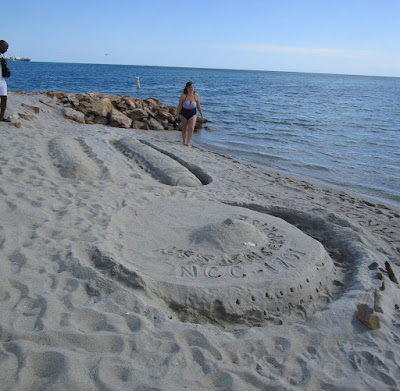 We tracked down a 2-for-1 deal and shared some fruity drinks, yum: 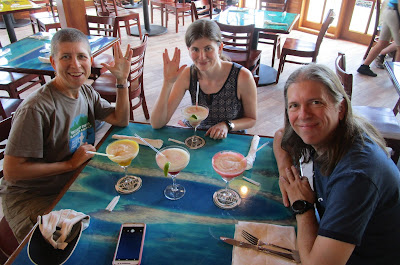 Another excellent towel animal - plus a notice that there were a few tickets now available for the Klingon Pub Krawl.  Sweet!  We had tried to sign up before the cruise but they quickly sold out.  Another chance tomorrow to try to score some spots. 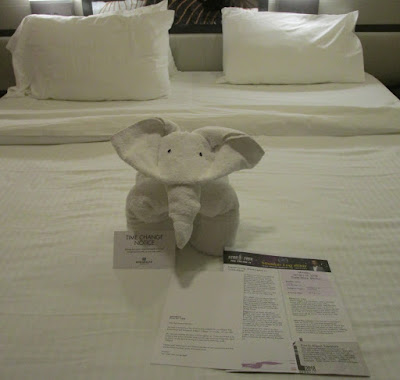 The highlight of the evening - Star Trek Squares!  With George as the center square, of course.  And the Gorn made an appearance!  The Gorn was funny, making noises and gestures and actually trying to answer the questions.  The rest of the stars were also hilarious. 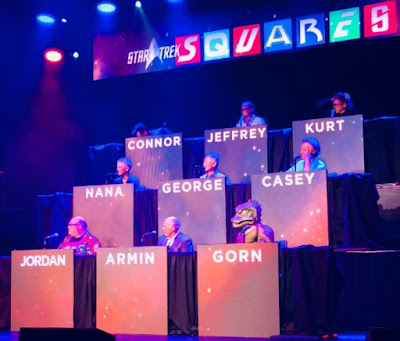 I realize now we could have gone back to the 2nd showing to see if seats were available, since each show was completely different.  Next time!

We listened to Robert O'Reilly talk about his 3 sons and his life growing up in NYC.  Quite enjoyable, and I could picture a lot of the places in New York that he talked about.  It's neat getting to know some of these actors in ways you'd never see on television.

The Tribble Toss on the pool deck looked like fun (but quite challenging).  We might have also heard a bit of karaoke this evening, I can't recall for sure.

I did find out later that there was one super awesome karaoke performance on the ship, posted on Instagram by astronomer Phil Plait.  Thanks Phil!

One more time with The Rat Pack!  I couldn't resist.  They make me laugh.  They're adorable.  They're creative and musical.  They're cool and nerdy at the same time. 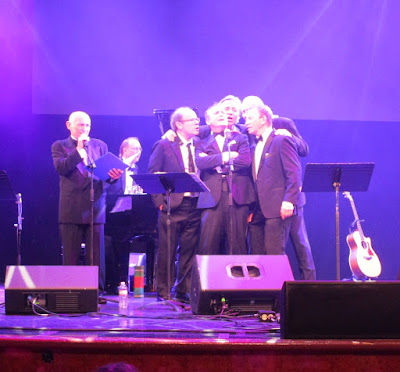 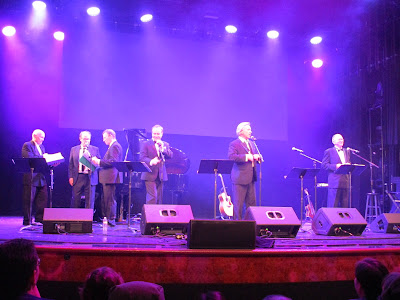 It was worth staying up late for.  Again.