Just a short little race recap.  Kip and I have enjoyed running at Shasta Trail Run's 4MPH Challenge for several years now, always a great event.  It's a 6 mile-long trail that you have 90 minutes to complete.  Everyone who wants to continue starts again for another set, going back the other way for another 6 miles within 90 minutes.  Last man (and woman) standing wins.

Not only is this a format that I really like, it's also a great way to customize your race.  This year it needed to be a "training run" for me, as I've been gradually healing from a PF issue since last fall.  Recent 50K races have gone well and my foot rarely aches anymore, but I'm not prepared to run a big chunk of miles again (yet).  This would be a good test.

Along those lines, no ibuprofen for me - I needed to know if it ever came time to stop in the name of preventing a PF relapse.

The day went well and we enjoyed running and talking.  Despite a ton of recent rain, the trail was in superb condition.  Thank goodness for well-draining trails.  There was one large puddle to tiptoe around but that was it.  No mud or slippery-ness, even down the steep hill to the creek crossing.

The course was extended this year, presumably because it wasn't quite a full 6 miles in the past.  That put the far aid station up in the parking lot instead of on the sloping grass, a move I fully endorse despite the added running distance.  We had plenty of room and a really nice aid station setup.  The volunteers were still great - as always!

The recent 50K's seemed to help my leg pep, because my lap times were similar to last year even with the couple minute-longer course.  I was gentle and methodical up the hills, light and springy on the flats, and smooth and easy on the downhills.  It made running very pleasant for many hours.

Also pleasant was the weather.  Happily it didn't snow (as an early forecast predicted) nor hardly rain (we were really expecting some), it was just quite cold and mostly sunny.  I had to plan well with clothing choices since it's 3 hours between seeing the same bag twice.  It helped wearing my new running vest for some laps so I could stash clothes and not deal with a jacket around my waist, a nice improvement.

The nighttime was slower, as usual, always more of a challenge to watch your step.  There aren't tons of rocks and roots, but enough to cause an occasional stumble.  Or a flying leap, in Kip's case.  He was fine, only disappointed that no one had witnessed such a marvelous display.  Anyway, nighttime always adds a few minutes to every lap, along with the slowing from the added miles.

That's when the large crowd of runners started dwindling.  I actually expected to need quite a few more miles than maybe was smart in order to win the women's division.  My first goal was more than 36 miles (so I could say it was worth paying for the Unlimited category instead of the 36-mile version).  Then it was nice to get to the darkness for some nighttime running for the first time in a while.  My PR here is 96 miles, and it would be a huge stretch to get that far, but I at least was pondering the possibility.

So when the last couple women dropped well before that, and I was the only woman left running, with just 6 miles to go in order to win, well, I had to ponder that for a while.  I had 90 minutes to ponder as I was running to decide how much further to push.

I think my body took that as a cue to provide some input.  I will never doubt the idea of the mind-body connection.  As soon as I started contemplating whether to stop or keep running, all kinds of little aches and pains started popping up.  Happily none of them were in my right heel.  In addition, it suddenly became challenging to keep up the pace I needed to make it to the turnaround on time.

I ran pretty hard (or at least, the version that feels like that even though it probably didn't look anything of the sort).  I made it to the far aid station with less than 2 minutes to spare.  I could have turned it around, but I decided that 66 miles - and the win - was a dang fine effort for the day.  A good indicator of where I am and what I need to do in the coming months.

Funny enough, I finished 7th overall, same as last year.  The overall winner was the same guy, Saravanan Mylsamy, with the same number of miles (126) as last year.  A bit of deja vu.

They managed to grab a photo of me before we headed out (the cold night made it hard to hang around long) - hey, an actual prize this time (an Altra gift card), awesome! 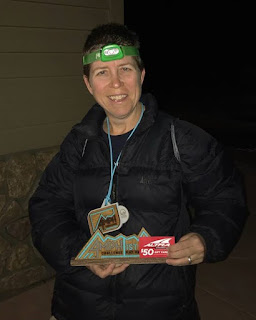 We like that the race is evolving over time and making good improvements while keeping what works well.  Thank you Shasta Trail Runs for another fun Challenge!