Big training weekend!  As we continue to prepare for Mount Rainier later this summer, we figured we should attempt one of the bigger California mountains.  Mount Shasta looked pretty big when we saw it last year from Lassen Peak.  We can now confirm that yes, it is large.  And snowy.  Impressive from any distance.

Our friend Jason flew out to climb with us, and we were joined by my friend Leslie from a recent MAA climb.  We have another friend named Leslie coming to climb Mount Rainier with us, so that created a bit of humorous confusion, but eventually we got it sorted out.

The weather for our climb was fabulous, way better than a couple months ago when Leslie and I were supposed to climb Shasta but got diverted for a storm that aimed directly at the mountain.  Happily we were able to climb Round Top instead, and that's where we met.  We were excited to team up for another climbing/training day. 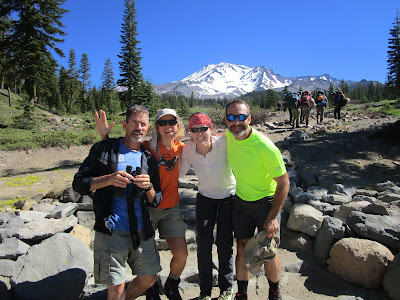 Finalizing large packs full of camping and climbing gear at the trailhead: 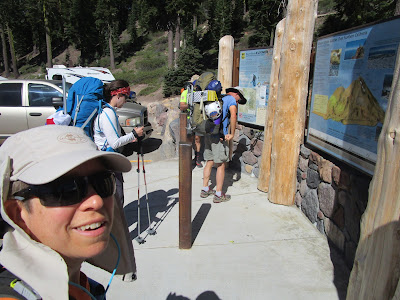 And a selfie for good measure: 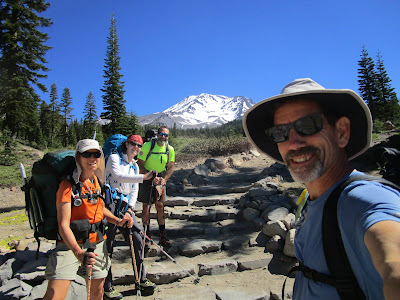 The walk up to Horse Camp was quick and easy.  We took a little break, enjoying the atmosphere around the hut and working on our altitude adaptation. 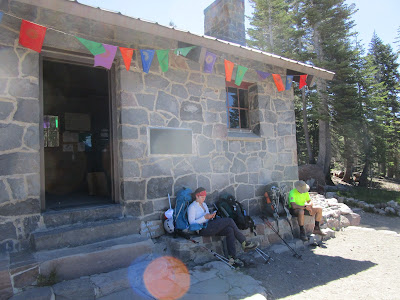 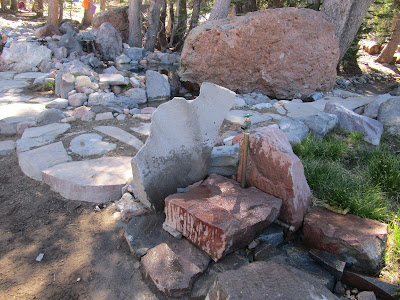 The news of the day was about rescues - two men in their 70's had been lost overnight but were now located.  SAR was still busy, though, with some kind of ankle injury.  We watched a helicopter fly over a few times.

John talking with someone about the Avalanche Gulch route and the multitude of tents expected up at Helen Lake. 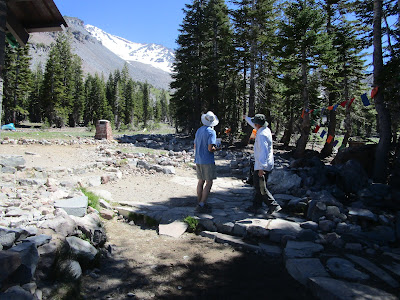 We, however, were headed for Hidden Valley and the West Face route.  Much less populated.  The path in that direction was a bit rocky but we were constantly distracted by the incredible scenery all around us: 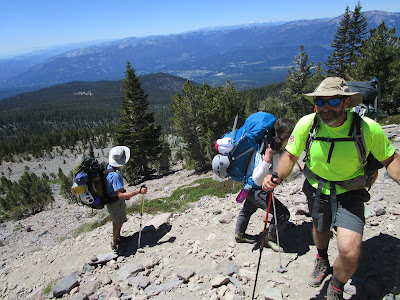 Coming over the last little ridge, Shastina (on the left) and the West Face route (on the right) in full view, grand and gorgeous: 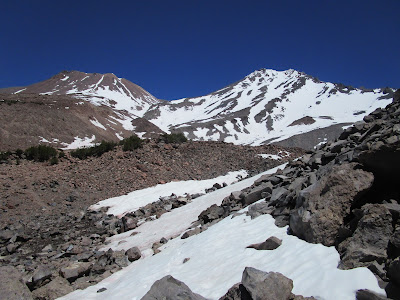 I was just telling Leslie how I keep bringing John to places where there is snow in the summer, and I managed to catch a look of "disgust" from him at the first snow crossing along the trail: 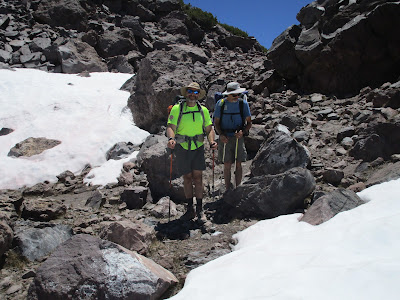 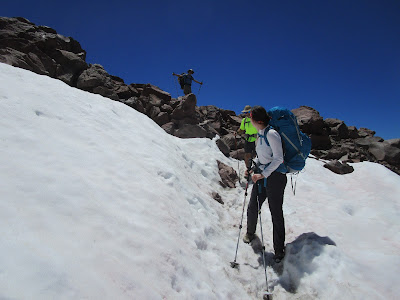 The good news was that the snow has been melting, enough that we were able to camp on dirt that night.  We found a great spot on soft sand and spent some time looking up at our route. 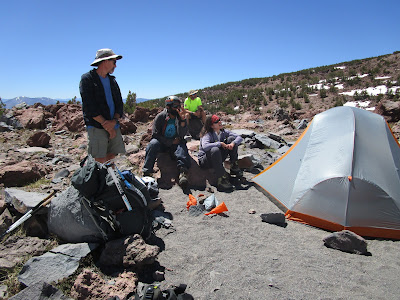 Everything I had read sounded straightforward, but we watched people descending across to a different snowfield, and then we heard about the guy with the ankle problem.  Turns out he had taken a slide that morning, not badly hurt but he wasn't able to walk out.  So the ongoing rescue was actually on our side of the mountain.

We queried climbers as they came back through camp and discussed route options.  We named the shapes of the dirt fields so we could talk about them more easily - the dragon, knuckles, fingers (not the same hand as the knuckles), Christmas tree, and the sideways menorah.  No one else would have a clue what we were talking about, but at least we could communicate within the team about the route. 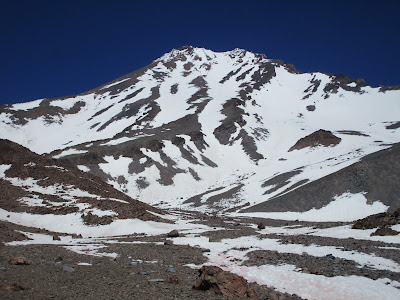 The helicopter was back - actually I think it was a different one, maybe from the National Guard.  The pilot seemed adept at flying into the valley, hovering to drop a rescue guy, circling around to land a ways away, and then going back to the rescue zone to pick up the injured climber.  Fascinating to watch. 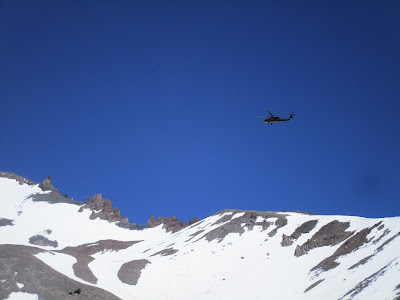 That was quite something to see.

OK, we should do something productive now.  We got out our climbing gear and headed over to a small slope to practice self-arrest, team arrest, and walking as a roped team.  I would have liked to take pictures, but didn't feel like risking the camera to a pile of snow that could get into any pocket while sliding down in various feet-first and head-first configurations.  It was good practice, and sparked good conversations about when to climb roped vs. unroped and to talk about different situations.

The main purpose of the weekend was training, so this was great.  I'll take as much on-the-mountain training as I can get.  Plus it was an excellent next step in John's physical training.  We've been climbing with weighted packs for several months and he's doing great.  Time for something bigger.

Getting ready for food and then to sleep for a few hours: 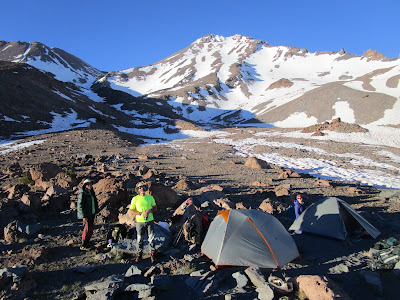 It was pleasantly not too cold (above freezing) when we got up and geared up, that was nice.  We set off around 1 am, John leading the way up the valley to find some snow to walk on.  We had a wonderful bright moon, just not enough for the camera to do anything with. 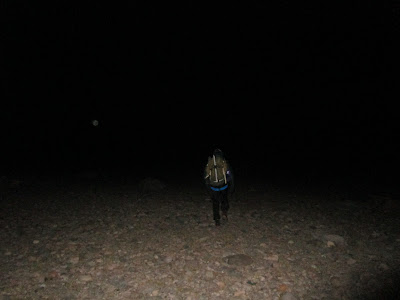 The lower snow was soft enough for easy steps and ice axe plunges, simple climbing up the snowfield to the right of the West Face route.  We opted for the less-direct path around the bottom steep section of West Face.

Eventually we had to cut back across, up to the dirt ridge to cross over to West Face proper.  The snow was harder and not as easy to cut steps into.  Jason walked ahead of me, kicking more room into the steps that John was making.

John climbed up to the rocks and tossed a rope down to belay me up the last steep bit.  While that was going on, Jason was adjusting a crampon when he lost it from his grip.  We were happy to see that it didn't slide very far, and once I got on the rope I was able to scamper over and retrieve it.  Turns out I'm a lot more confident when I have a rope backing me up.  Good for training.

We reached the rocks and found some good wind protection.  I got out the camera when I realized the sky was starting to lighten up and become colorful: 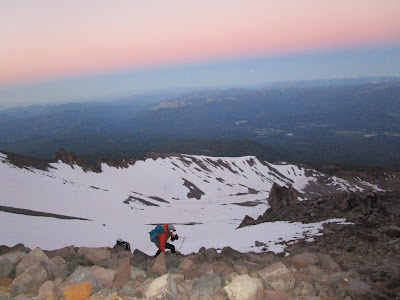 Then we noticed the shadow of the mountain - way across to the west of us.  The silhouette of Mount Shasta, so amazing!  We sat in awe and stared at the lines of darkness and light across the landscape and into the sky: 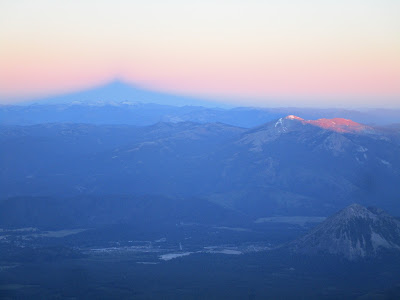 This was truly the highlight of the trip: 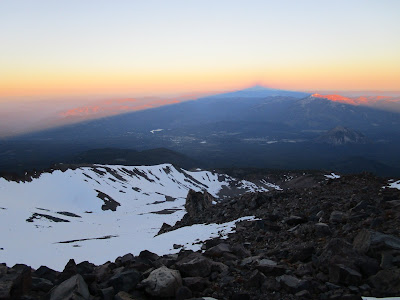 OK, getting chilly, time to get back to work.  The slope on the West Face snowfield was at an easier angle and good practice for using crampons on the hard pack.  We zigzagged upward, eventually coming to terms with just how long and tall this climb is.  And you can see all of it at once (the top of the slope isn't the top of the mountain, but it is over 13,000 feet).  The altimeter was helpful to get a sense that we were actually making progress.

Eventually it got steeper and we roped up to practice climbing in that manner.  Jason was dealing with a nagging cough and John was slowly approaching the limits of his training, plus several of us were feeling minor effects from the altitude, so we would climb and then take a break, climb and rest: 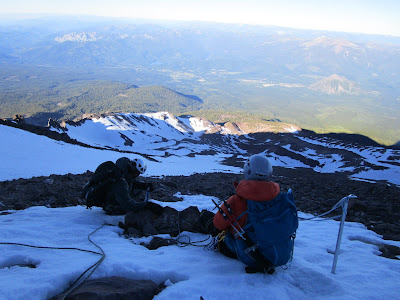 Then it was my turn to have a minor issue.  My ankles got really tired of the sideways slope and walking in one direction without turning.  Jason, who was leading the way, was happy to zigzag more frequently, but we had been saying all morning that none of us needed to summit.  We were all very satisfied with this being a training day and we'd gotten a lot out of it already.  It didn't take much for me to say, hey, that's probably high enough, and everyone seemed perfectly fine with that.

So at just above 12,000' we took our highest elevation break and prepared to descend.  Leslie wanted to try going down the rocky scree field on the side of the snowfield, and I wanted to try going down the snow (I've dealt with plenty of scree to know what that's like).  John stayed on rope with me and I found descending to be pretty easy and fast.  Jason stayed with Leslie and we all made our way down.

John can sleep just about anywhere: 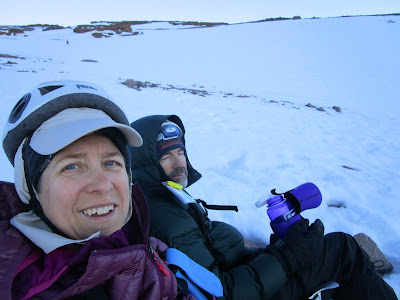 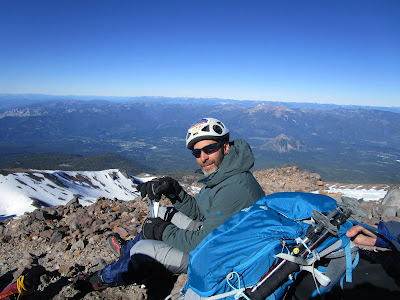 A selfie for good measure - what a fun team to climb with! 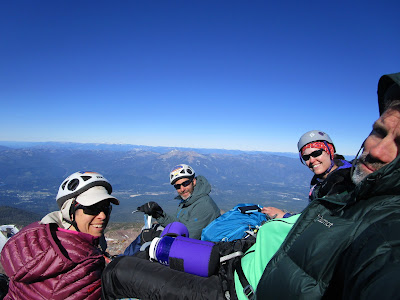 We took a few minutes to set up a running belay so we could see how that would work.  Leslie had done this at a previous MAA climb and led the way with the demonstration.  That was super useful and we had some good discussion around it.  Thanks Leslie!

A bit of glissading practice, or maybe Jason's just sitting down to take a break: 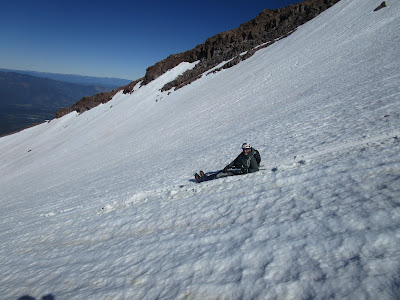 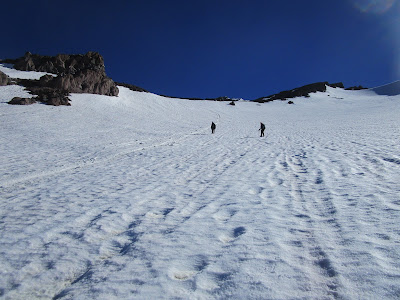 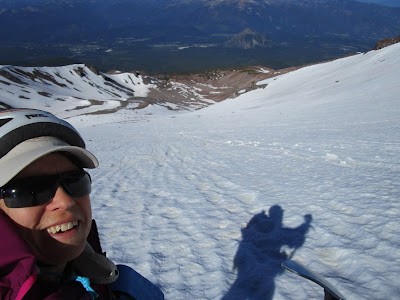 Turning around early proved to be an excellent decision because we had a lot left to do that day.  Descend to camp (with some soft snow to wade through near the bottom), break down and pack the tents while swatting annoying flies, filter water, hike back in the now-quite-warm day, take another break at Horse Camp, and finally walk back to the parking lot.

Next time we'll hopefully have the option to spend a second night on the mountain and hike out in the morning, that seems like it would be more pleasant.

Thank you Mount Shasta, that was a lovely weekend! 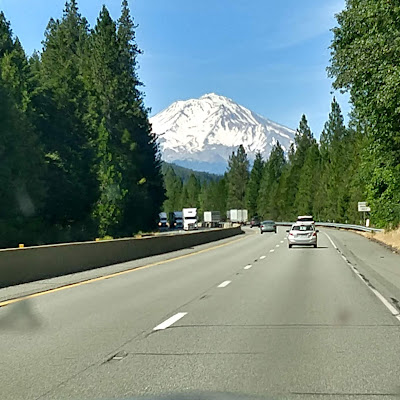