SW Utah - Beaver and Beyond

Back in September (let's see, yep, 2-3 months ago), we moved to southwestern Utah for a few weeks.  John picked up some project work on a huge solar farm installation.  Something he hadn't done before and it was in the right direction for our travels (i.e. moving south as winter approached).  Cool, let's explore another part of Utah.

We started at Minersville Lake State Park for a few nights, as a basecamp while we figured out the lay of the land.

Which for us usually means literally climbing around on whatever hills we see nearby.  I had fun running on dirt roads and trails around the lake, then we set our sights on the peak to the west.  It probably has a name, but I'm not finding it easily right now.  Regardless, it was an interesting climb with lots of thin slate-type rock to deal with.  And some inspiration for cooking pancakes later: 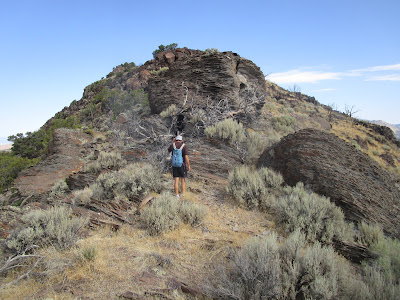 Checking out the valley to the west where the solar farms are soaking in the sunshine: 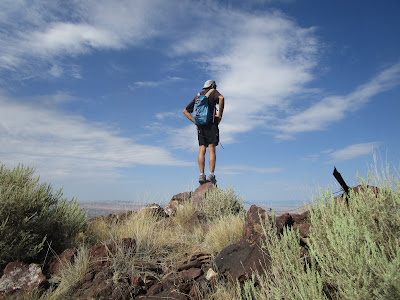 The view back toward the lake where we were camped, and oh yeah, it was still California wildfire season at the time (and for another couple months after that) so it was a bit hazy: 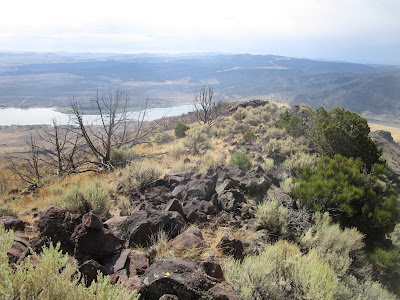 Tug and Howie at the campground (loving the new heat pump air conditioner!): 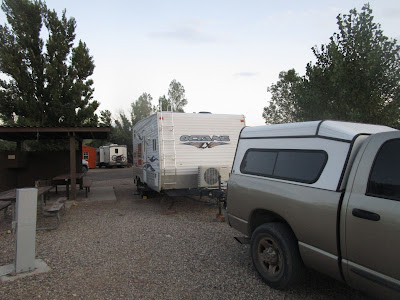 Pre-panel section in the middle of the desert:

John enjoyed the work and was glad to get a glimpse into an operation of this scale.  There were wind turbines and an experimental geothermal station nearby as well.  Good to see Utah getting into renewables!
We moved into an RV park in the town of Beaver for the next month, which made for a longer drive for John but easier access to everything else.  By which I mean a small grocery store, a hardware store, a little post office with old-timey PO boxes (I love getting a box when we stay somewhere for a month or more), and the excellent Creamery (cheese, ice cream, yummy cafe food, and a good bathroom for my long runs).  I printed out a map and ran every street in Beaver - thank you Kip for that inspiration!
We spent some time in the mountains to the east, the Tushars.  They are full of rocks.  And great scenery.  John came with me for a big loop, including off-trail up to Shelly Baldy, fun! 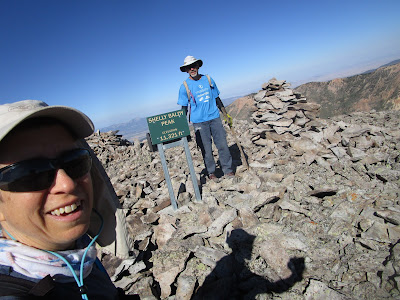 Looking across to Mounts Baldy and Belknap - someday we might make it there too (yes, I would like to go back - we never really "finish" with a place, unless we just don't like being there): 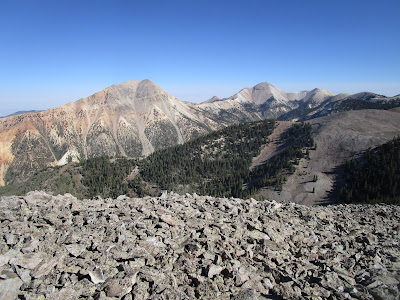 A particularly strange smoke map, with crazy fires all along the west coast, smoke covering most of the country, and one section of clear air - right where we happened to be at the time.  Lucky us, at least briefly: 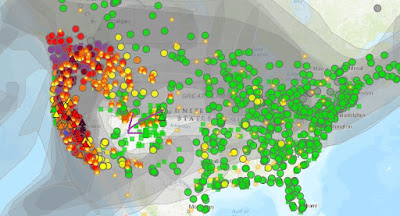 Enjoying our occasional blue skies, with another hike in the Tushars.  We drove up to a high pass and took off on another cross-country adventure.  So colorful and pretty! 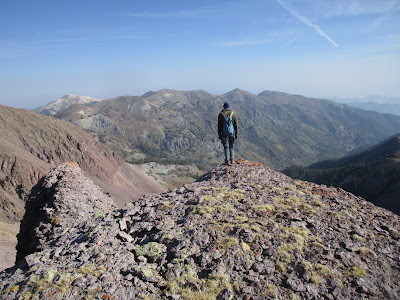 And we found some mountain goats!  We didn't expect to see much wildlife up here, super cool. 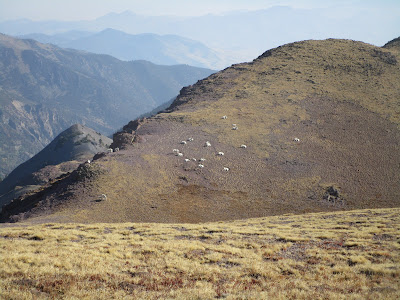 At the top of Delano Peak - someone left an apt painted rock: 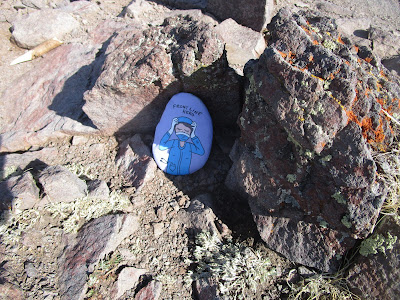 Leafing through the summit register on Delano: 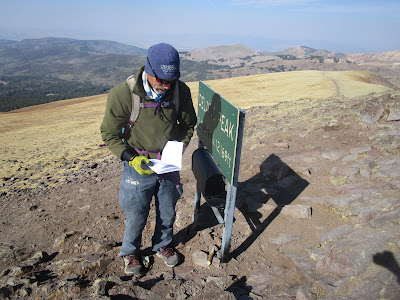 The topography up here is unlike anything we've seen before, a mix of rocks and tundra.  Utah continues to surprise us. 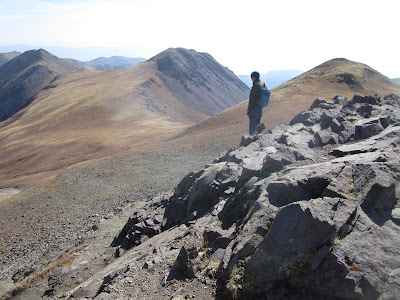 Heading back to the truck, thanks for a lovely day: 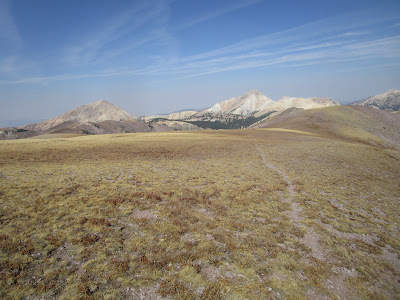 We biked on back roads up toward the Beaver "B" and then hiked up the steep road to get a closer look.  Of course, the solar panel-powered lighting system was interesting: 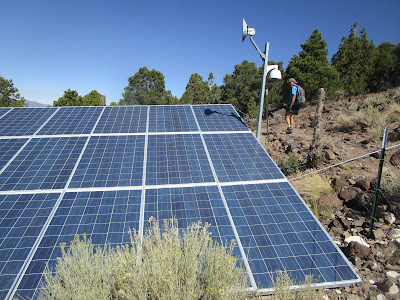 Perhaps I should have gotten a photo of the "B" from down below to give more context, but it was neat to be up here (the giant letter is lit at night, quite impressive): 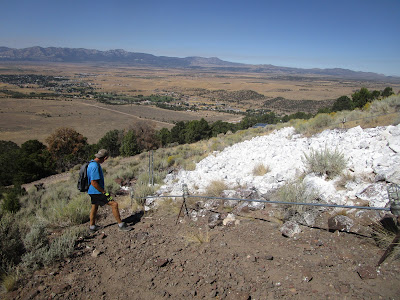 Something that made me laugh whenever I passed it during a run.  I think our truck has a dent worthy of one of these stickers too: 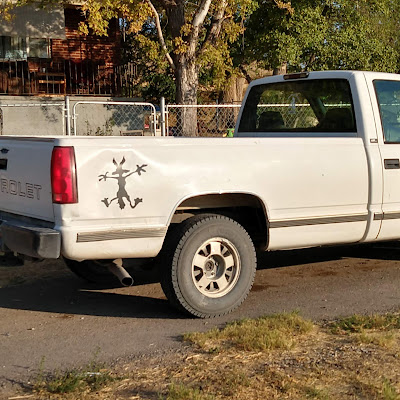 On the weekend of the Beaver marathon/half-marathon, John noticed that the giant sign above the gas station near our place displayed the normal message... 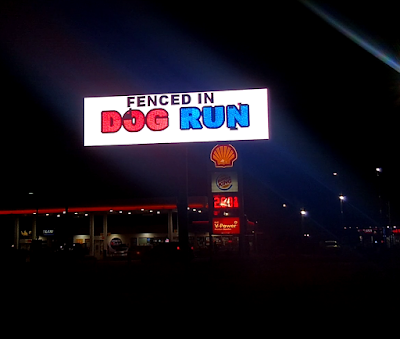 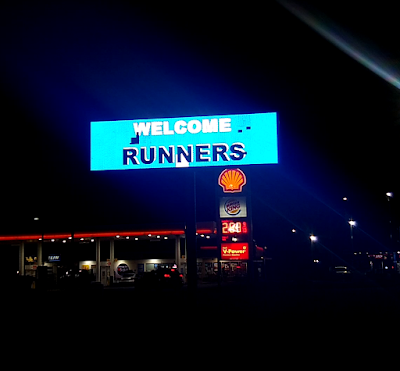 After the big solar project was over, we moved to a park near Cedar City for a week (waiting for a battery shipment that we eventually were able to divert to Flagstaff instead for later pickup).  Three Peaks park was great!  Quiet campground ($5/night) and trails to explore, more interesting rocks, and views of more solar farms:

John had been thinking about climbing Granite Peak ever since we spotted it from our first campground next to Minersville Lake.  We finally made time to get up there; well, I'd probably been procrastinating, but finally decided I should join John in this more-challenging endeavor ("good training", the usual tagline).
Gorgeous fall foliage in the lower woods: 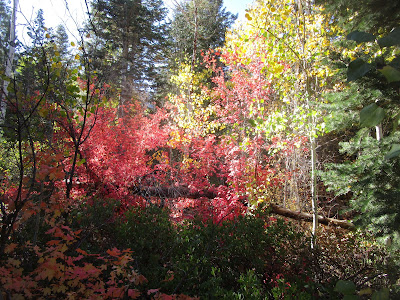 As promised, the route required a lot of bushwhacking.  Good thing we're adventure racers!  It actually wasn't too bad, just slow - it helps to have perspective from doing other much-worse things.  We worked our way up a drainage and then emerged from the woods to find a bunch of low manzanita in the way.  At least there were some great rock formations to marvel at: 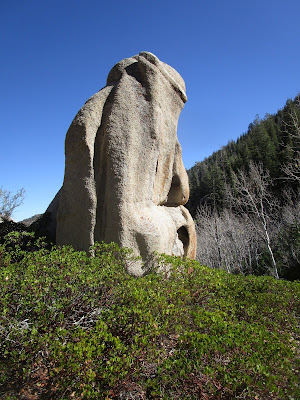 Sometimes it's easy to find a path through manzanita, other times you just have to slog through it - looking back down the hill at the easier-to-maneuver-around aspen forest: The real challenge was the steepness of the slope from there on up to the summit.  Steep!  Grab onto anything you can reach steep.  Rocks, roots, helpful aspen trees - thank you tree! 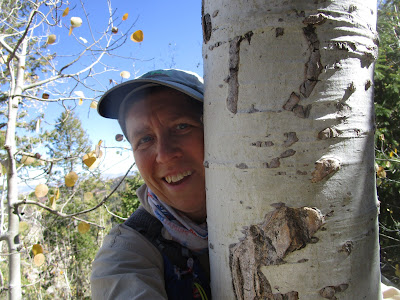 It's hard to show steepness in perspective, but I tried (also, taking pictures is a good way to get a little breather): 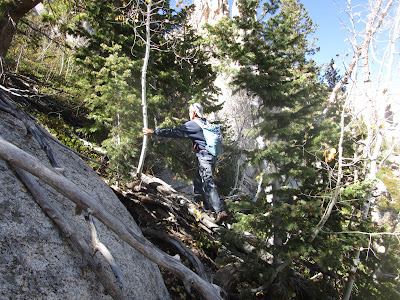 OK, this actually does look steep: 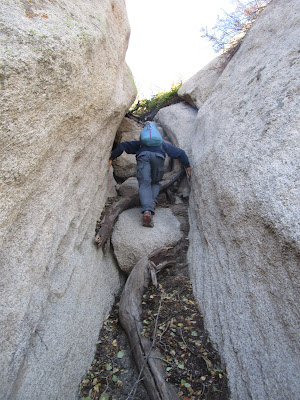 We found a lovely flat spot really close to the top so we could pause for a snack and take a look around.  Quite the view from up here; also, excellent granite shapes: 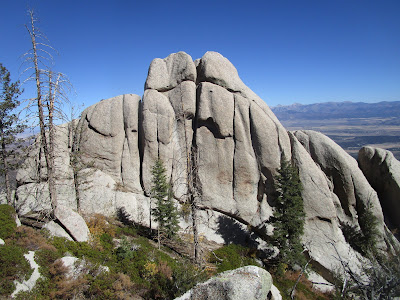 It seemed like we needed to either go up the large rocks next to us, or work around to a gully to the right?  We decided to try the large rocks.  The decision to bring harnesses and a rope was a good one (for me, anyway).  John climbed up first and belayed me up the short challenging sections near the summit: 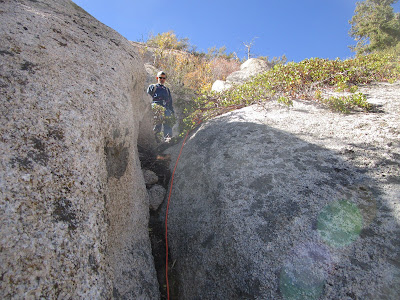 Made it to the top, yay!  It counts that I could touch the USGS marker, right? 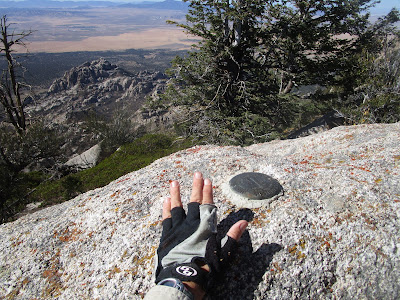 Views to the east toward Beaver and the Tushars: 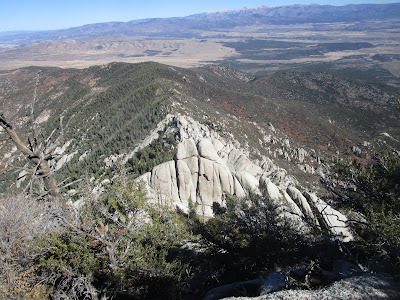 John checking out the rocks on top of Granite, while I was happy in my little cubbyhole: 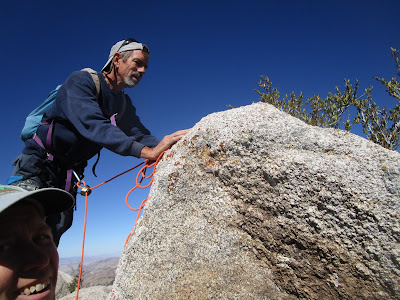 Going down, we tried the gully to the right and that was better than the large rock route.  The descent was steep (steep!) but way faster  :)  Staying closer to the drainage worked better - between the manzanita and the deadfall.  Eventually we got back down to the easy part where we just had to clamber over the occasional down tree.
Fun day, glad we did it, thank you John!  And thank you Utah, we super enjoyed our time there this year!
Posted by Marcy at 7:36 AM