Since we were going to Colorado anyway, we decided to go see our friends Taylor and Andrew as they were running their first ultra race.  The race was the super-challenging Golden Gate Dirty 30, a 50K with a ton of vertical feet and some sections of technical trail.  No crew or pacers were allowed, but the park was still open, so John and I started from the north side and did some running/hiking on the course.

We arrived super early to make sure to get a parking spot in a small lot, took a nap, and then set off on foot to track them down.  What a pretty place!  It was wonderful to explore many trails we hadn't seen before, and the scenery is really nice. 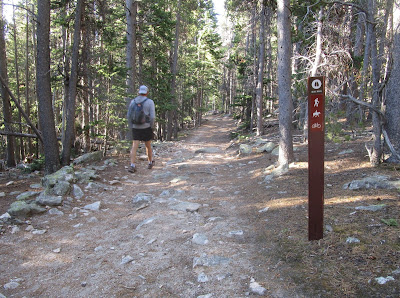 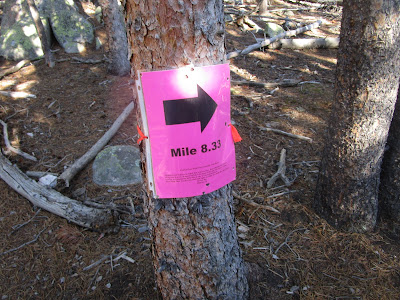 Hey Andrew!  He had started in the first wave and was moving really well, near the front of the pack early on.  John is either letting him know which way to go or poking him in the ear... 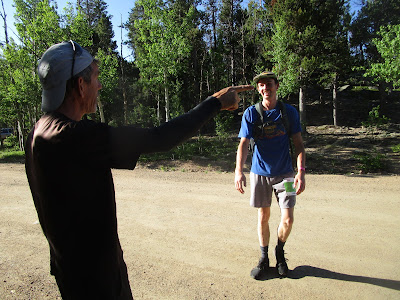 And there's Taylor, looking strong  :)  She had been battling an IT band issue (which I can relate to) but was determined to finish this thing. 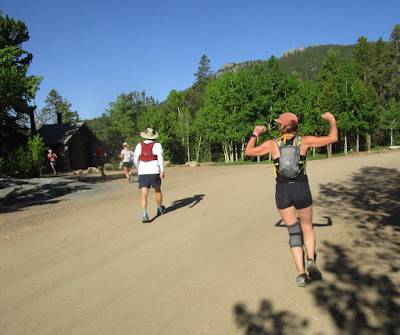 I did a 3-mile loop that included trails from later in the race, enjoying a peaceful moment next to a pond: 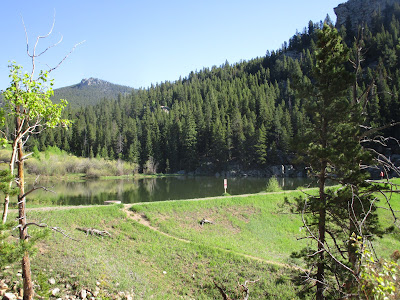 Then I cut over to another part of the course to see runners come through.  I missed Andrew but got to cheer Taylor through, yay! 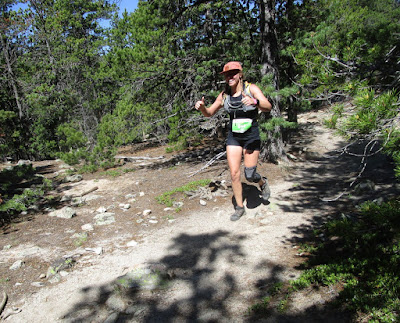 Next quest = the big loop down the hill to aid station 3 and back up the other side.  The aspen grove is just lovely: 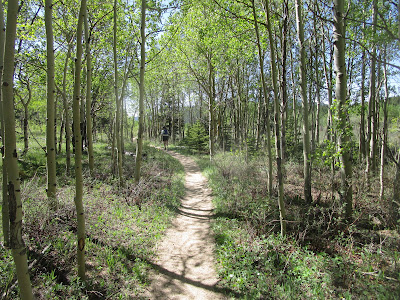 I went in reverse direction from the race route in order to say hi to runners.  Hi Andrew!  Looking good!  I think he wasn't feeling quite as peppy as he was earlier, probably something to do with the big hill he just climbed.  He said something about questioning his life choices, which means he's well on his way to being a true ultra runner. 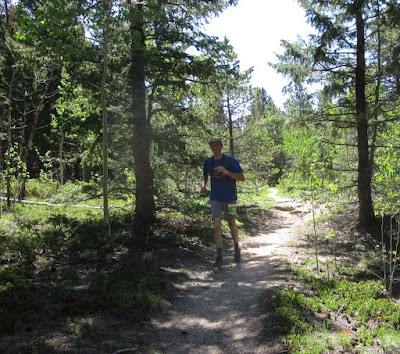 Organized chaos at the aid station.  It was hot and exposed and full of people, so I stayed only briefly. 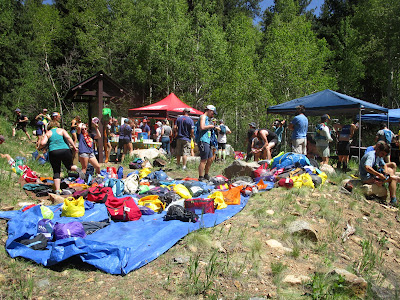 Not long after I started up the other side of the loop, there was Taylor bombing down the hill and smiling the whole time.  Nice! 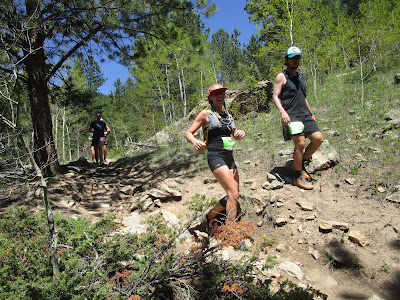 It was a long climb, gradually tapering off with the number of runners coming toward me, and then at the top I found a great view of the Rocky Mountains: 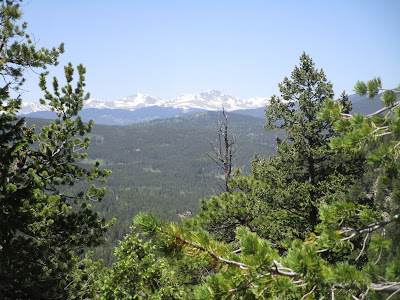 Also, one of the more technical sections of the course.  Yes, the trail goes along the ridge and over these rocks: 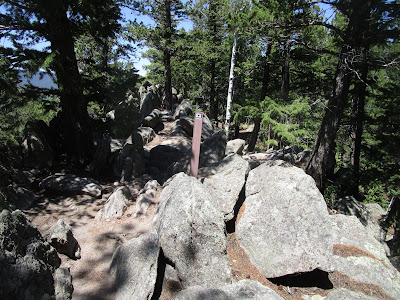 Columbines on the way back to the field near the top: 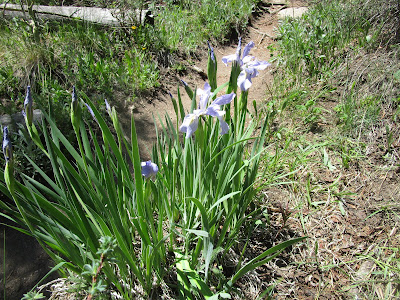 After that big downhill and back uphill, I was starting to respect this course.  The next several miles reinforced that view.  I went backward from race miles 13 to 9 and discovered why the runners had already looked slightly beat down when they arrived at the top of the col.  The course pretty much always goes down and up, over and over.  There's a steep, rocky uphill as well: 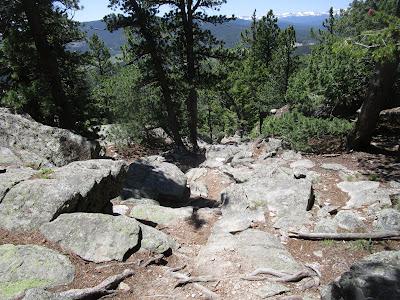 Looks like fun, unless you're going 30+ miles in a day: 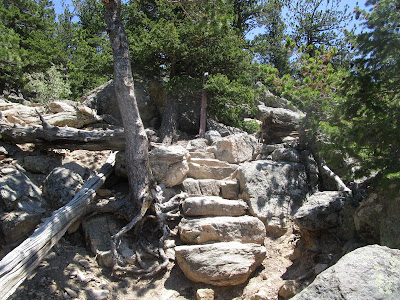 On the bright side, the scenery is great everywhere you go in this park! 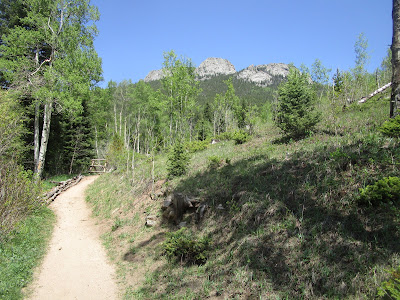 John headed for a different part of the course, the last few miles.  He found Andrew and his friend Steve at aid station 4.  They were feeling the effects of the efforts, but ready to go see what this "Windy Peak" thing was all about. 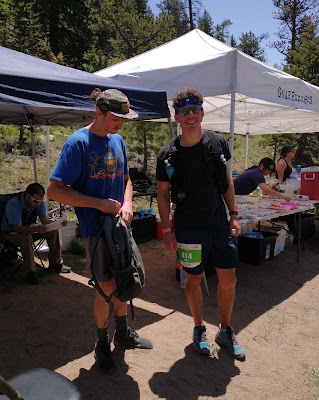 John took a short cut to the top of the mountain and met up with Andrew again - nice job!  It's (almost) all downhill from here: 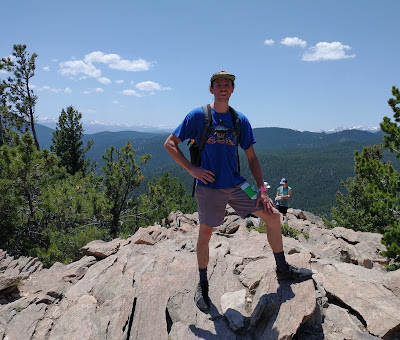 Back on the lower trail, Taylor is powering through her IT band problems and still smiling! 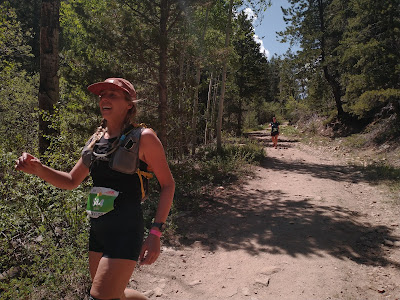 We stayed away from the bustle of the start/finish area (and crazily, missed seeing our friend Jason who was doing the announcing, unbeknownst to us; would have been really funny to run into him there).
So we didn't get to cheer them in at the end, but we met up the next day for stories, congratulations, and delicious biscuits.
Plus we got to see Danny and Emilio in Denver!  Here they are taking a selfie, with us in Tug in their rearview mirror: 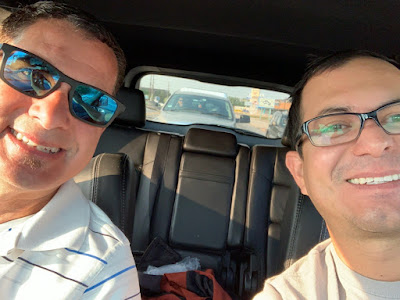 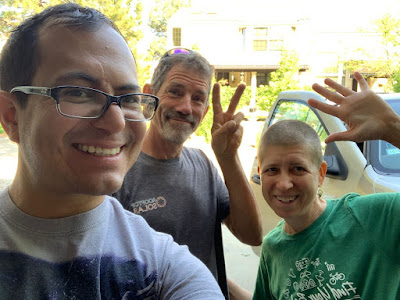 More smiles and joy for being together again finally:

And then it was back to the mountains and rivers...