Sheep herding at the rodeo

Two years ago I went over to the rodeo (just across the street from our park) to see the sheepdog herding trials. I'm a huge fan of "dogs with jobs", and these dogs were so much fun to watch. Zipping around the ring, listening to their handler, watching the sheep, using their instincts to get the sheep to go where they wanted. It looked like the dogs were having a fabulous time. The sheep... not so much!

While watching all this, it occurred to me at the time that I'd like to write a short blurb about the experience, maybe post a few photos - I guess that means I should start a blog! It took a couple more months to get started, and this blog turned into a great way to report on our summer travels and winter races. But it officially started in my mind that day with the sheepdogs.

Now, two years later, I was back at the rodeo yesterday to finally do that report on the sheep herding :)

And what I discovered is that I need a better camera for the difficult lighting in the livestock barn. Learning things makes life interesting, like I'm making progress (at least inside my own head).

So anyway, here is a short photo essay, complete with "the best I could do" photos from our basic digital camera.

One of the dogs awaiting his/her turn: 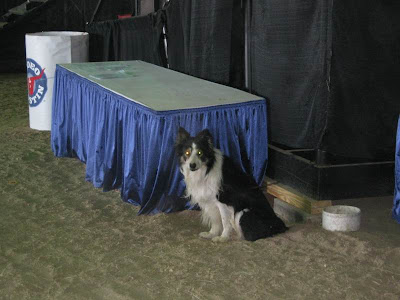 They released three sheep on one end of the ring, then the dog would run down to collect them. The first task was to bring the sheep back to the handler and make them circle the little pen. 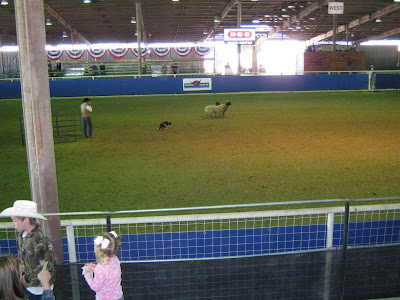 Then the dog would coax the sheep back to the other end to work a pattern. The difficulty of the pattern depended on the level of the dog and handler. 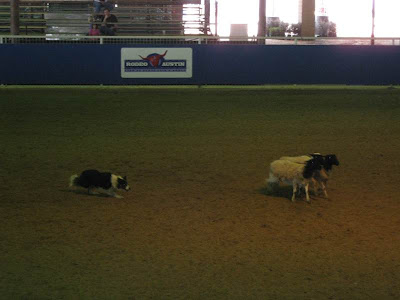 Most dogs managed to get their sheep to circle at least one cone, and many completed a figure-eight move. Some sheep were more willing than others, but in all cases the three sheep were bound and determined to stay together in a pack of three. 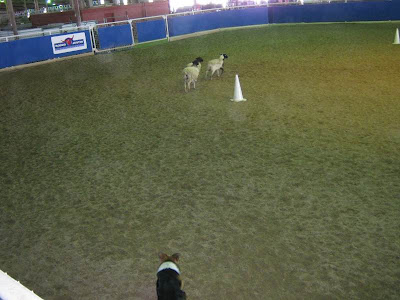 The toughest move involved sending the sheep through a short section of fence next to the edge of the ring. One dog stopped and had a 10-second staring match with his charges before they decided it was in their best interests to do what the dog wanted. 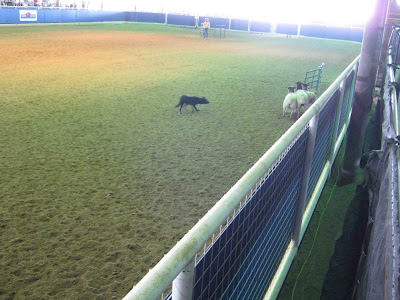 Finally it was time to return to the handler and corral the sheep into the little pen. Most dogs managed this, although one novice dog spent the better part of 3 minutes running in wide circles while the sheep ran in a tight circle around the handler and pen. I guess the dog was too excited to stop running, or the handler too inexperienced to know how to direct the dog. Or maybe those sheep were the most obstinate of the bunch. In any case, it was funny to watch.

Another dog bringing the sheep toward the pen: 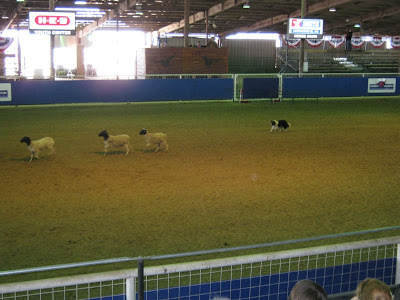 There's a lot more going on at the rodeo - carnival rides, the midway, music, a show called a "Swine Sprint" that I didn't manage to catch, interesting farm animals to gawk at, and of course the main event in the evening, the actual rodeo plus a concert. Anyone in Austin who is tired of the SXSW downtown traffic, come on out to East Austin :)
Posted by Marcy at 6:36 AM