Last Saturday John and I joined a few of our friends and competed in the Great Urban Race in downtown Austin, TX. I was somewhat nervous because there were over 300 teams in attendance - perhaps the most we have ever raced against. But it was a beautiful day, so we set out to enjoy ourselves and hopefully qualify for the championship race in Las Vegas next fall.

Us plus Dave, Kip, and Dave's boys Nick and Logan: 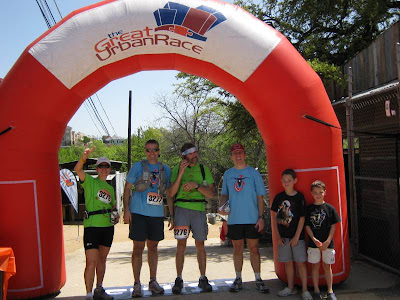 Our friends Tim and Zach from New Orleans - in costume! Awesome. 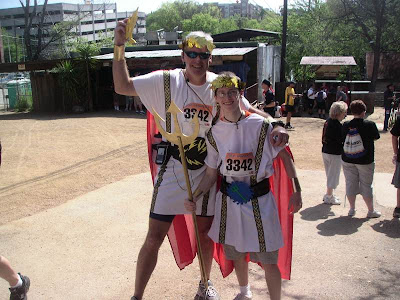 The Austin American-Statesman ran this photo - go Kip and Mike! And there's even a partial shot of me on the right, as I cut outside the arch to try to avoid some of the stampede: 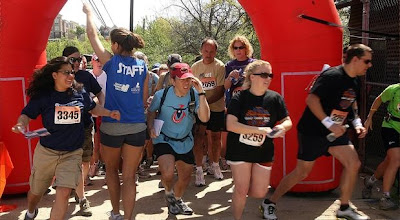 We opened our clue sheet and decided to head to the Mary Lee Foundation to drop off a can donation first. The charity is on South Lamar, so we ran over to Colorado St. to jump on a bus heading in that direction.

Jason and Mike found a guy with a cowboy hat for one of the "tic-tac-toe" photos (you had to get 3 of 9 options listed and the results had to be in a horizontal, vertical, or diagonal line). The man was fine with us taking our picture with him as well: 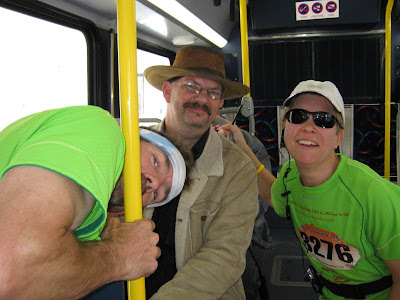 We jumped off the bus near a convenient store that had cans of food available for purchase, then ran to the Mary Lee Foundation to turn in our donation.

After getting our clue sheet stamped, we ran across South Lamar to find a donut vendor. This checkpoint was listed in lat/long coordinates (nice!), and Google Streetview showed an empty lot (funny!). Luckily there was an Airstream with donuts for sale there that day, so we got the attention of the guys inside and Kip or Dave took our photo feeding each other a donut hole: 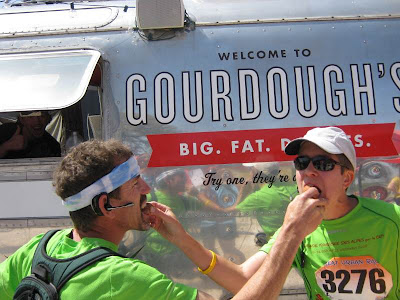 From there we ran back toward town and found Music Makers where John picked up a guitar to try to shake a pick out from the inside. He figured out the inside compartments and didn't have much trouble making the pick fly out. More difficult was getting him to hear me when I said we needed to bring the pick to the finish line - but the volunteers help point that out, and John retrieved it from where it had skittered across the floor.

Back outside, we headed west on Barton Springs to Shady Grove where John quickly roped a "steer" (a roping dummy) from about 2 feet away. Easier than for teams on the Amazing Race!

We tried briefly to catch a bus from there, but the #30 didn't seem to be coming and I think the #3 passed before us as we ran toward Lamar. So we decided to hit a couple checkpoints downtown and then look for a bus to UT from there.

We ran across Town Lake and over a few streets to find the Lizardman in front of Fado's Irish Pub. There were a bunch of racing teams there, waiting in line and then taking each other's photos with the guy. I think I was pretty patient, until John took two bad selfie photos before finally getting a good shot: 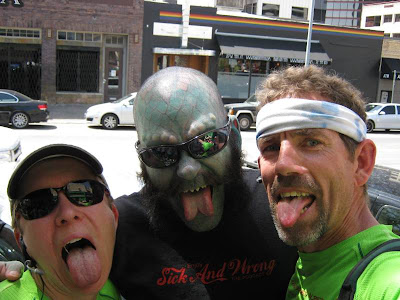 Next we ran up to Gold's Gym on West 6th Street. Well, first I confused "west" with "east". Yep, experts is what we are. We finally located the gym and headed downstairs to see about a Zumba lesson. What we found was a workout room filled to capacity with racing teams all doing an energetic dance. There was a short line in front of the room, and no indication how long we might have to wait. We decided to bail and skip this checkpoint.

This turned out to be a not-great decision because it took forever for the next bus to arrive (and we could see it the whole time making its way slowly up Congress Ave). We could have done the Zumba and still caught it - oh well!

Finally we got on the bus and sped up to UT - yes, the bus did start moving well at that point, thank goodness. John got antsy once the bus hit Guadalupe. Someone on the bus (obviously another racing team) started whistling "Mary Had a Little Lamb", which I thought was pretty funny because we were about to play that tune on a recorder. I guess they wanted to practice beforehand.

We jumped off a bit early and ran the rest of the way as the bus basically stalled in traffic. Nice move, John.

The next checkpoints were lined up nicely across the UT campus. First stop = the Turtle Pond for a shot of us with a live turtle: 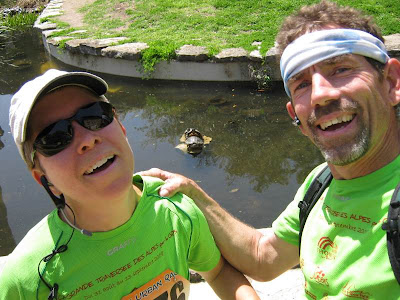 Then down to the Mall and Martin Luther King - finally an urban race has found him checkpoint-worthy! 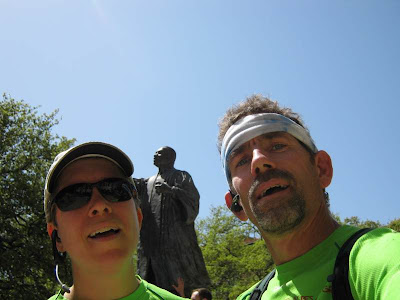 There was a fountain nearby, so we gathered up a few students to help us with a photo of 8 people (including us) doing the "Hook Em Horns" in front of a fountain - thanks everyone! 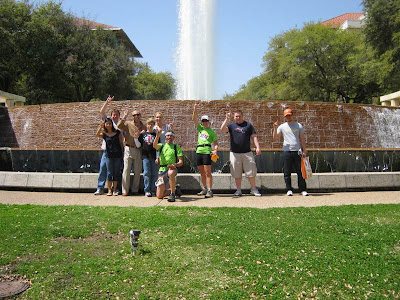 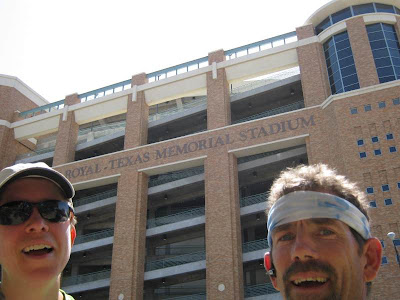 OK, time to get back downtown! There weren't any buses at the moment, so we took off running. Well, John took off. I lagged until we got hooked up on tow (thanks John!) then I took off too.

We hoofed it down to 6th Street to Pete's Piano Bar. There we found some UT cheerleaders who taught us how to spell "T-E-X-A-S" with our arms. The music started and we did the cheer three times ("Texas, fight!"). John was such a trooper - so many Hook Em signs in one day for my diehard Aggie husband! The things we do for urban racing.

Kip and Dave had come into the bar as we started with the cheer, and we all left together. We had one square left on our tic-tac-toe, so Michelle, Logan and Nick were very helpful in joining us for a barefoot shot - thanks y'all! 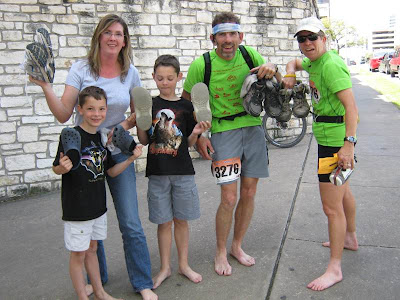 Kip and Dave were at the finish line waiting for us - how nice of them! We linked arms and crossed the line together (John and I still carrying our shoes): 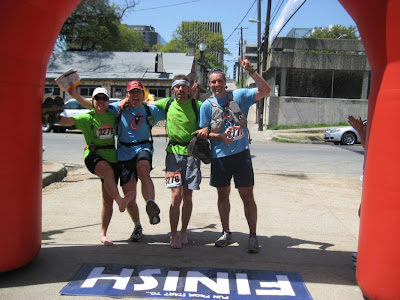 The GUR Crew granted us a tie for first, which we all thought was very cool. Us with our giant checks and Zach's trident sticking up into the photo: 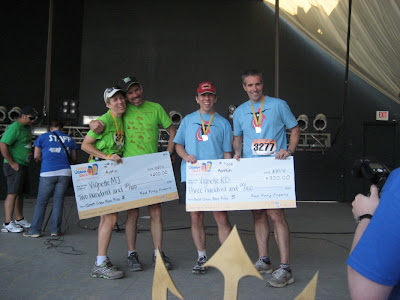 What a VERY fun day - GUR did an incredible job with an interesting, challenging but do-able course that should appeal to the masses as well as us folks who like to finish as quickly as possible. Now I'm thinking we should have spent more time enjoying ourselves out there. Huge thanks to the GUR Crew for the excellent race and everyone who helped us finish it fast.
Posted by Marcy at 3:28 PM

Kip and Dave's report from the same race: