Canyoneering in the Subway

John got up early the next morning to return to the permit office and was successful in acquiring 2 permits for the following day - and that will be my next post :)

I slept in (yay!) and then we drove up Kolob Terrace Road, dropped off our bikes at the lower trailhead, and continued up to Wildcat Canyon trailhead to start our hike. We expected to see more people heading for The Subway because they "sold out" of the 80 available permits, but either most people were coming from the bottom - hiking only - or they started from the top at a different time of day.

Coming from the top required ropes for a couple rappels, plus we would be traversing some pools. Someone in line the day before had suggested the water would be only waist-deep. My book suggested we would be swimming. So we were ready for either, hoping for the former.

Heading into the woods at a higher/cooler elevation, a nice start to the day: 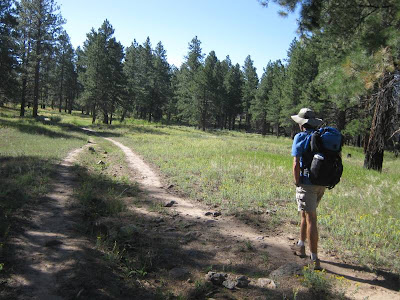 The view toward the Left Fork canyon of North Creek, which we're heading down to: 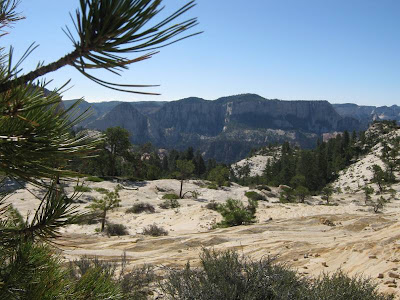 Interesting sandstone on the way down: 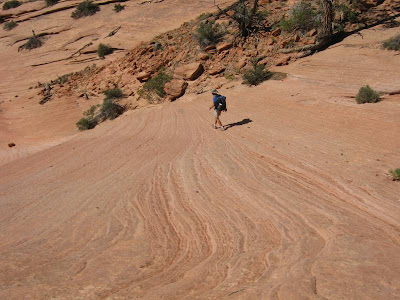 It was a steep drop down to the canyon floor, but nothing I wouldn't choose to do on my own during a rogaine (that is now my frame of reference).

Our first water crossing of the day, with John "feeling out" where might be the best way. Turns out there was no quicksand, so that was a plus, and it was only shin deep: 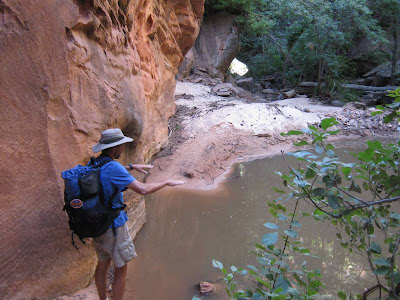 A feature similar to The Subway section: 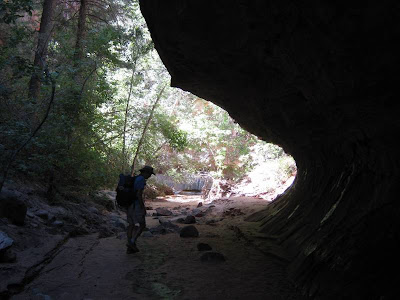 We could only guess how this tree got here (and that's one of the reasons people take flash flood watches very seriously in these parts): 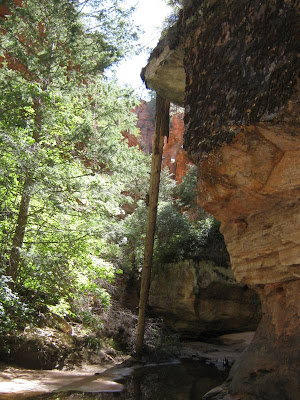 After a short rappel, John found a new way to carry the rope: 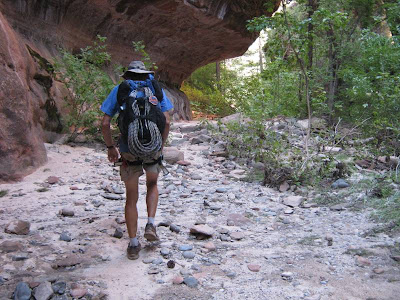 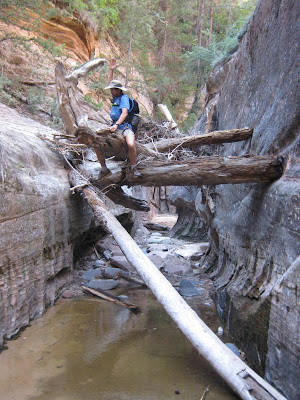 Here's where the pools of water started. I'm so lucky to have a man who doesn't mind going first to see how deep (and cold!) it is: 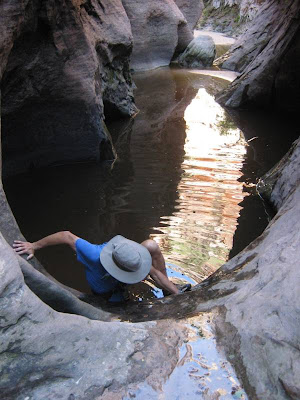 A little over waist deep - somewhat "brrr" but no problem. John came back to me, I slid down into the pool and we carried our packs over our heads. 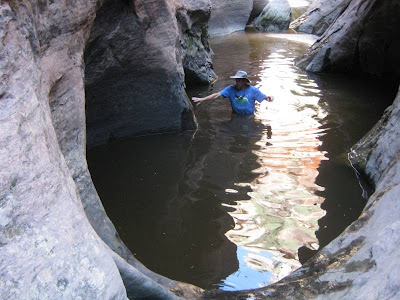 And here is where I put the camera away in a waterproof Aloksak bag. I had planned to take it out and get more photos, but that plan disappeared when we hit the next pool and it was more than waist deep. And more "BRRR!"

I got some good down-climbing practice, we floated our packs inside trash compactor bags, and eventually had to swim a few feet. We started making faster decisions instead of standing around getting colder (no time for photos!). John would explain something and I'd say "OK!" without trying to get out of it or make it easier. Just do it!

The last pool required some real swimming, and it was neat - deep pools were connected by shallow rocks so you could catch your breath for a second before plunging in again. If we hadn't been so cold and trying to keep packs dry we might have actually thought it was fun!

Finally we made it out of the deep water and found a wonderful sunny spot on the bank for some food and warming up. Ahhh...

A couple of guys popped up from the next drop, surprising us. We had not reached the main rappel section, but they had come up from the bottom and climbed up without a rope. Nice! They went up further to look at the pools and decided they had seen enough. It was fun talking to them for a minute. We met another couple from France doing the same thing. I was impressed.

The next rappel was a short, fun drop over a tiny waterfall. I'm slowly getting better at interesting entries into raps - I'm more used to the straightforward "adventure race" rappels but the different types of rocks and rope tie-ins require a bit more maneuvering. I'm slowly starting to think that it's fun :)

The final rappel down a nice smooth rock: 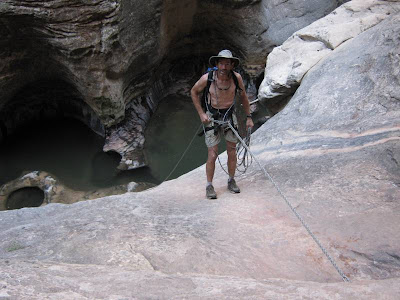 Looking upstream at the pools that the other folks had to go through to get to a clamber up a long tree - we were glad to have a rope to miss that water, at least! These pools are similar to the ones we did swim through: 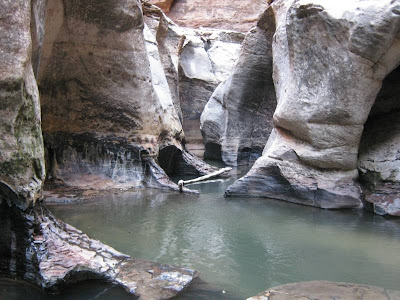 And here's the famous Subway! 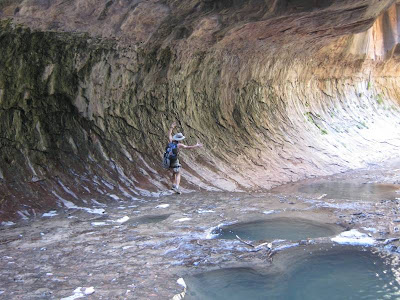 A unique section with overhangs on both side and pretty colors - I'm glad we got here: 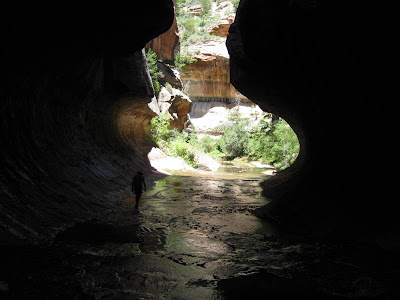 Below The Subway it was a long hike down the creek. We thoroughly enjoyed it. Maybe because we were warm again (but not hot) and it was great fun splashing around in the creek now that we were already wet. 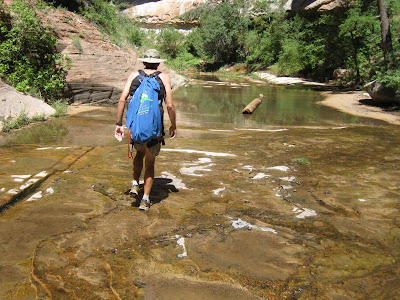 The creek starting to carve a new pathway - erosion in action: 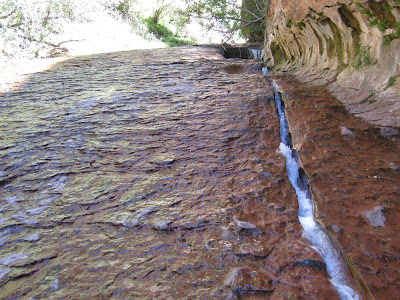 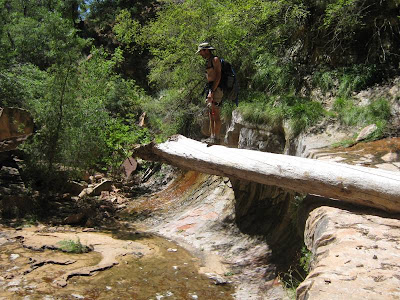 Yoga on the cascade: 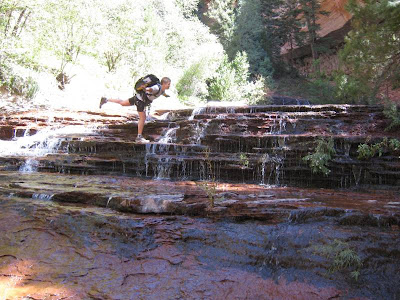 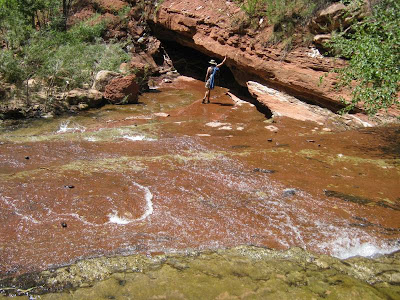 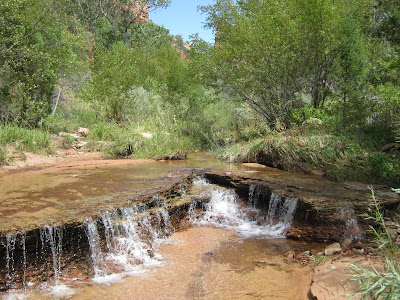 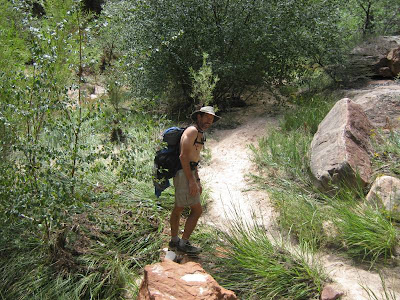 The last bit involved a climb out of the canyon and back to the bikes, no problem. Biking uphill back to the truck was more of an effort, but we got there eventually.

On the way we noticed smoke coming from that direction. Hmm...

Turns out there was a forest fire burning not far away. It had started from a lightning strike two weeks prior but billowed pretty big in the windy day: 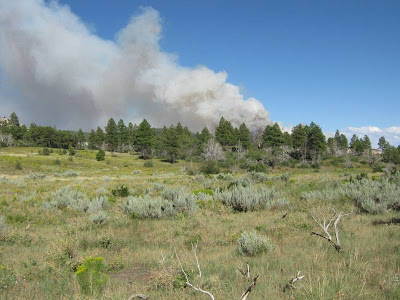 We could even see some flames in the trees (barely visible on the right side): 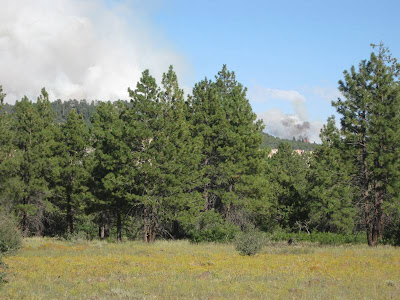 At least our truck was fine :) We watched a plane circle the fire for a while, went up to Lava Point to see it from a different angle, and then headed home to rest and prepare for a big day in another canyon - which one? It's a Mystery...
Posted by Marcy at 2:58 PM