Adventure hike in the Catskills

A rare weekend of no travel and no visitors - I guess I should focus on running errands. But first, a bit of training in the Catskills hills with some weight in my pack. Or I should say, "weights", as I schlepped a couple of dumbbell disks around for a few hours.
I started on the eastern end of the northern mountains this time, and the first parking lot was flooded so I drove further up to find the next parking lot near a huge waterfall. Couldn't pass that up!
Here is the lower falls on the way up to Kaaterskill Falls - tons of snow melt today, awesome (both in the thundering water and in the fact that the SNOW is MELTING): 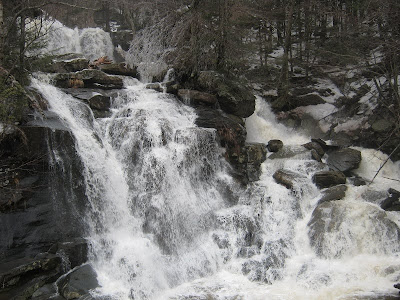 A half mile up the trail I found Kaaterskill Falls, apparently one of the oldest tourist attractions in America (way before the giant ball of twine, for example): 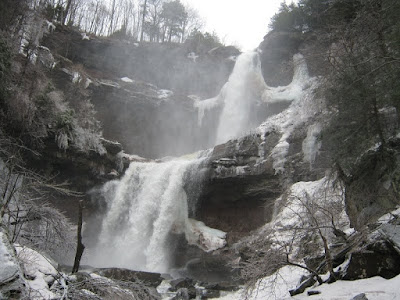 A failed selfie (except for the part where I got myself in the frame), although I did manage to include a fellow hiker scrambling down to help me with a better shot: 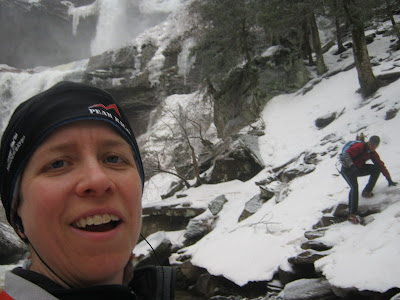 Much better! Thanks dude! I returned the favor, hopefully their picture turned out as good: 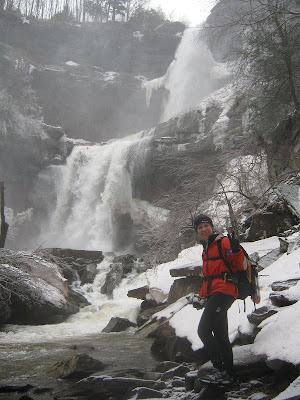 From there I was stuck either returning to the car to drive further up the road (yeah right), or heading straight up the side of the hill to a trail 250 ft higher in elevation. That was an interesting challenging involving kicking steps in the crusty snow, hugging trees, and following a tiny stream where the rocks were exposed for better footing. Fun!
The flat trail at the top: 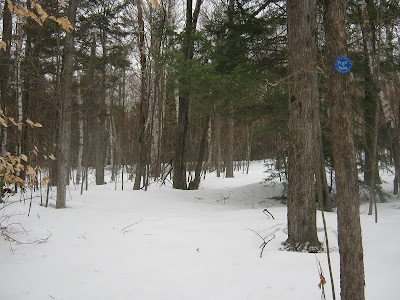 I circled around to the top of South Mountain, where I came across these large tracks that made me stop and say "WTF?" out loud... the photo isn't great (mostly flat lighting today), and I should have put my palm next to the prints for reference. Trust me, they were large (3-4") and seemingly completely out of place after the small canine and rabbit prints I had been seeing. 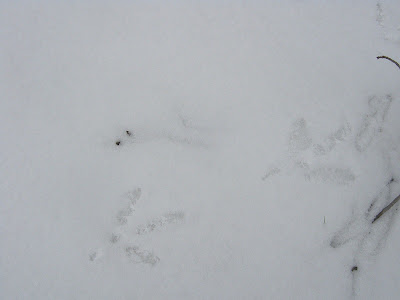 I decided they were "snipe" tracks, from the movie "Up". I kept my camera out just in case a large Kevin-looking bird was wandering around in the woods. I thought that was a joke, but the joke was on me - I came home and found the photo in this link. OK, so it's still probably not a snipe, perhaps turkey vulture or sage grouse. But it was still highly perplexing at the time.
Chipmunk Highway (didn't get a shot of the chipmunk scurrying across, but that's how I knew how to label this): 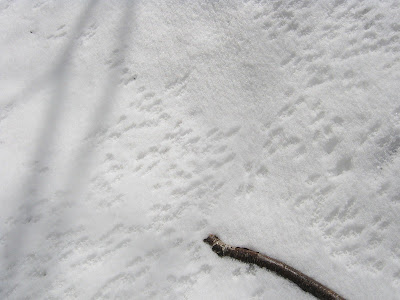 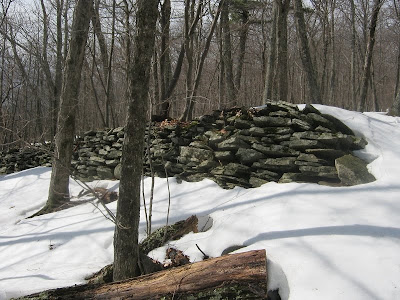 The trail - yeah, we're closing in on mud season next: 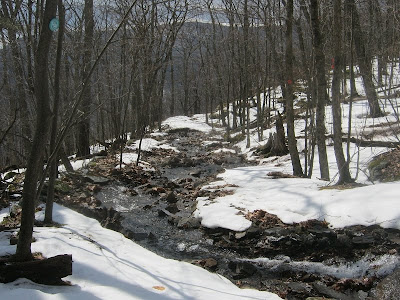 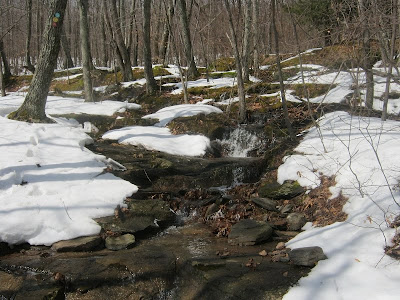 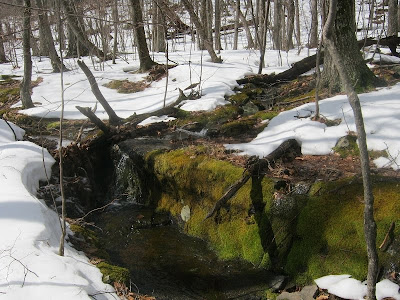 Look! A trail with no snow or water on it: 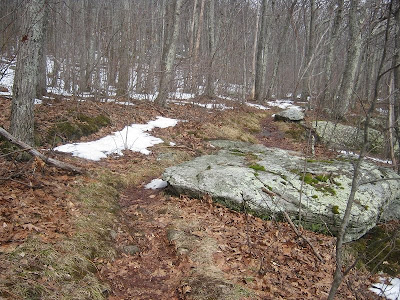 A couple of pretty views along the Escarpment Trail high above the road: 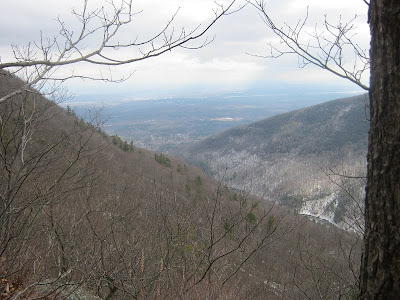 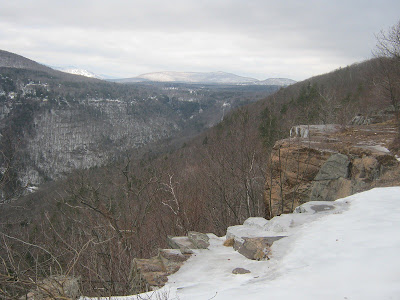 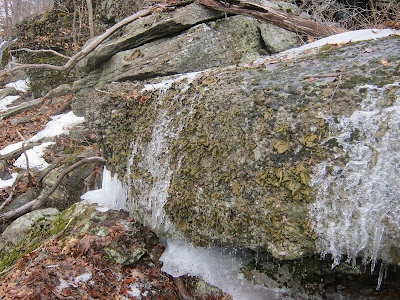 Sure, I'd put the trail through here too. A bit of New York-style "Geology Rocks": 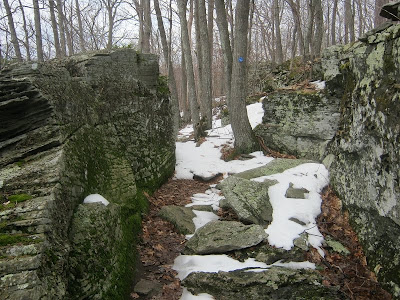 The Layman Monument, for a firefighter who died fighting a forest fire in this spot: 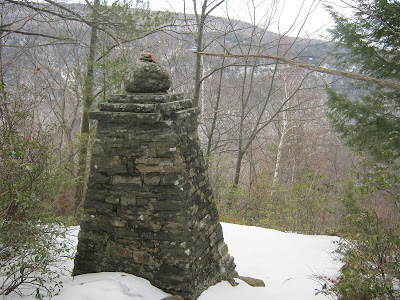 The trip down the side of the hill was equally entertaining, including the use of a short rope for some pseudo-rappels from tree to tree. The Yak Trax were nice, but crampons would have been better. The rope was a perfectly good (just slower) stand-in. I told John that either he would have been proud of me or laughing at the absurdity.
One last photo of the lower falls, for good measure: 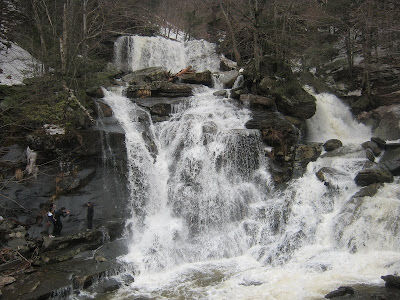 What a fun adventure! Next up: John rolls into town via Amtrak this week, yay!
Posted by Marcy at 3:47 PM

Marcy...looks like you're enjoying the Northeast! John out there yet?
Those large bird tracks are from Turkeys, you'll see them all over the place.
The scramble up the side of the hill kicking steps in the snow is good Hardrock training ;-)

Have fun! Enjoy the wet spring and then the black flies, hope someone told you about those bloodsuckers ;-)