I haven't had a lot of extra time lately, what with reality TV being in full swing and trying to keep up with a series of fun/great training/time-away-from-home weekends. Luckily I haven't set any great expectations with this blog and posting frequency!
Here are few random things from the past couple weeks.
First, a photo in the "view out the back of Howie" series, courtesy of John at his parent's farm in East Texas - thanks John! This also provides a nice mellow cover picture for the Facebook link instead of the next photo that follows a bit further down. 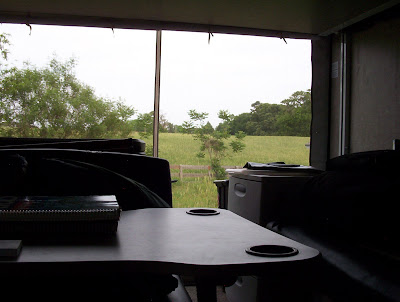 But first (unless you skim ahead) you get to hear some stuff about the DBR 50-mile race that I did the day before the Boston Marathon. DRB stands for "Don't Run Boston" and it takes place in a park south of the city (of Boston) with a wonderful network of trails. It has great appeal to me as an orienteer slash ultra runner (yeah I could add a few other slashes but let's keep it relevant for the moment). Fun navigation with a trail map while running long distance - a wonderful combination of having to use your brain, but never getting lost for more than a couple minutes because the next intersection is usually about 200-400 meters away. And most intersections are marked with numbers. It is possible to get really lost, I could tell, so I was quite careful about making (mostly) the right turns. It kept me on my toes, which I loved. No trail markings for us that day!
I followed the lead guys for an hour, which certainly made for a nice comfortable start, but at the first aid station they took off without hardly stopping, while I decided to mix up some Spiz and let them go. Time for my own fun. A couple guys asked if I had run this before, and I told them I couldn't help them in that regard - turns out they were concerned about me! I thought that was cute. And tried to demonstrate that I knew what I was doing with the map. I think I was only partly successful, but they seemed to realize that I wasn't going to get horribly lost and stopped worrying about me.
Right about the time they got ahead of me, we had just started along the Skyline Trail. Most of the course was runnable and really great footing, but the Skyline Trail cut straight through the middle of the park, up and over hill after hill along the rockiest footing around. I think they carted all of the rocks from all over the park and piled them onto this trail. It was great for variety but certainly slower.
And... since it had been raining at the start (for the first half hour or so), the rocks were wet and a bit slippery. Just about the time I was wondering whether a particular rock was too slick and slanted, my foot decided to go ahead and get the answer for me - yep! Very much to the affirmative. I went down and landed on my right side. Here is a photo from when I got home (much, much later that day): 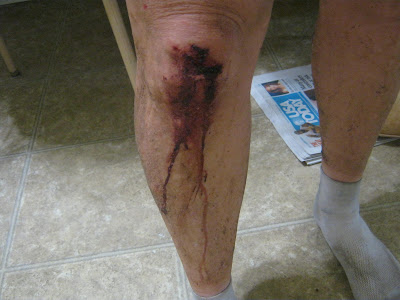 At first I was concerned, more actually about my forearm that seemed to have a small knot on it. Plus I bloodied up the inside of a Too Cool arm warmer! Note: Blood does wash out of the Too Cool arm warmers. One less thing to worry about in case you ever fall while wearing them. Everything was still working OK, so I continued on. More Skyline Trail, more rocks, more fun!
In fact, my bloody appendages started making me grin for some very strange, unexpected, perverse reason. What that reason is, I still don't know. But it totally added to the happy feeling for the day. Volunteers at the aid station wanted to wash it off - heck no! I was dang proud of my "war wounds," plus I enjoyed watching the faces of the tourist hikers who got a glimpse. One guy went speechless and just pointed, and I was like yeah dude, I think I noticed that too. I just kept smiling and running on. Maybe it's related to the "slash adventure racer" tag that you could add to the above list.
One highlight of the day was listening to Glee songs for the whole last 19 miles and still managing to follow along on the map while bopping along. Amazingly, my playlist lasted the whole time and I was on the very last song as I chugged into the parking lot just as the sun was setting. Many thanks to Bob and Howie for putting on this race!
For the awesome trail conditions (well, except for them being wet and occasionally covered in small ponds) I was going so slowly. But I didn't care - this was just for fun and training. It took way longer than the Bull Run Run the previous weekend, but my legs felt great, my knees thanked me for taking it easy on the downhills, I loved the occasional view of the Boston skyline, and the weather turned out wonderful (cool with a nice mix of sun and clouds). I wholeheartedly recommend this race, and there's a 50k version too. I was the first, last, and only female 50-miler finisher. Talk about no pressure!
Link to the results/writeup:
http://www.trailanimals.com/race-results/
I had so much fun, I decided that Sunday would be my birthday instead of the following day. Then there was no pressure to make a workday "great" in any way. And Monday actually turned out surprisingly OK, topped off with a birthday cake in our group meeting. Sweet! (literally) Thanks to all for the wonderful birthday wishes.
Last weekend I decided I needed more actual climbing (to get me almost through another virtual trip around the Hardrock course), so I returned to the Catskills to see how the snow melting is going. Repeats up and down Black Dome/Black Head were just the ticket. Although there was still some snow on the trail near the top to keep things interesting: 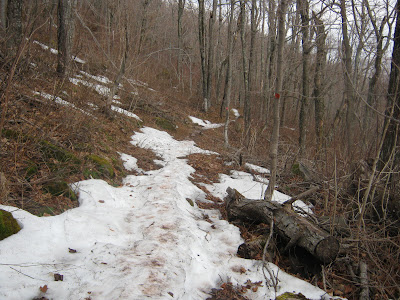 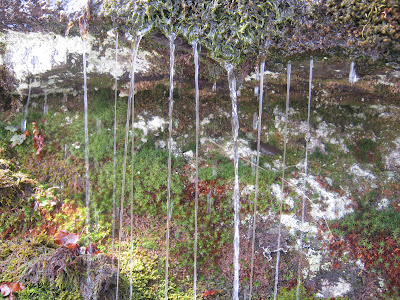 The worst of the icy-ness on the trail was at the very top of each peak, so I did it one time in each direction to check out the views and found them not worth the hassle of repeating. But at least I got pretty much all of the climb in before this point: 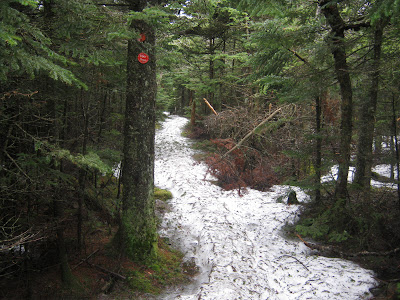 Before the clouds and mist and rain rolled in, here's a photo of Black Dome from a scenic spot going up Black Head (who named that one, anyway?): 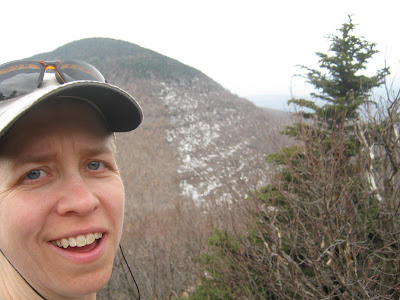 And a closing shot of randomness - I found a replacement for my Gregory Reactor running pack on eBay and made sure I won the auction, yay! My old one has a zipper issue that isn't a problem in training but is making things annoying when I'm trying to be fast in races. A really nice cyberspace birthday present! 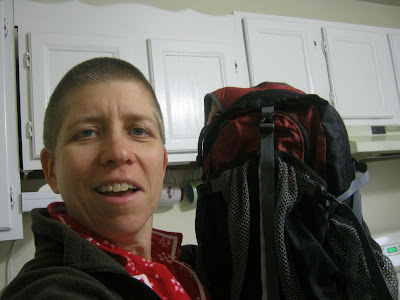 Marcy, glad to hear John's coming....for good, I hope!
Also glad that you enjoyed DRB, it had been one of my favorite 50Ks in that area since I first ran it in 1997!
Happy Hardrock Training!