John came to town for 3 racing weekends, and I'm pretty psyched having him around. We started with a fun, no-pressure weekend of orienteering at West Point. 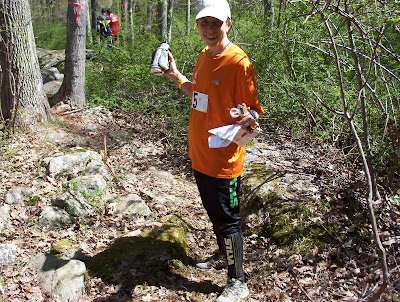 Day 1 was a mid-length distance where we learned some things about the terrain and character of the mapping and point placements. I learned that I don't enjoy wading through knee-deep vegetation. I guess I kind of knew that already. We both mostly hit the points right-on except for the normal mishaps here and there. I felt slow, but didn't worry about it much.
In the afternoon we participated in the sprint courses. That was a fun, short, high-paced run around the camp lake. It was actually more technical than most sprint courses (other folks were saying the same thing), so I used my ability to spot people that knew what they were doing, and my lack of shame in following them, to my advantage. I had to split off from one guy once it was clear he wasn't keeping up with the real pro (a fast lady) in front of us, but it was too late to stay on her trail. Luckily I can still navigate on my own, just not as quickly :) 26 minutes and done.
Sunday was the long course, and by Saturday night I knew I needed to be on top of my game for this one, based on the distance and my time for the medium course from day 1. It had a 3-hour time limit and I figured I would be close to that if I didn't make too many errors. I spent several extra minutes on one early point, but mostly stayed focused and took time to set up a strategy whenever I felt that would gain me some time in the long run.
One strategy was to follow the tall, thin guys who were obviously also on the Blue course. There was no way I could keep up with any of them on my best day, but the little time I gained here and there when I could bump up my pace and watch their path made me think I might have a shot at getting in under 3 hours. One time I even knew exactly when we were supposed to jump off the path we were running down, got to the flag at the same time as one guy, and even beat the other guy who overshot it ahead of us. That was fun.
At least the woods were more clear for faster running on day 2 (different section of woods) so I just needed to run whenever I could. And my climbing legs are doing well, so that helped my endurance with the multiple ups and downs. By the end I just had to hit one last point on the side of a hill under a small cliff - got it! Finish time = 2:53, yay! That was fun.
This past weekend we traveled to Boston and picked up Kip at the airport. He was doing ground support for our Great Urban Race before heading to VT to visit our parents. It was really great to see him and spend the day in Boston together.
The race itself was entertaining, as all GUR races are. It was our first time racing in Boston, with no scouting time to speak of, so that made things more challenging than usual. I managed to mix up "South Boston" and "South End", causing us to make an error right out of the gate in our first checkpoint choice. The rest of the race was spent recovering from that and figuring out the most efficient way to untangle ourselves. While still trying to get step-by-step directions, and figuring out the checkpoint tasks.
The tasks were fun - translating words at the hostel, comparing two pictures to find 3 differences, dropping off items at a local charity, and reading what I think was Shakespeare out loud for several long paragraphs. John remarked that we had never said the word "virginity" so many times in 5 minutes.
The day started beautifully - sunshine, no wind. It deteriorated into rain. Luckily that was about the point we started riding the T back and forth, so we only got wet for a few minutes at a time. That was one advantage of the route that we took.
Some of our checkpoint photos: 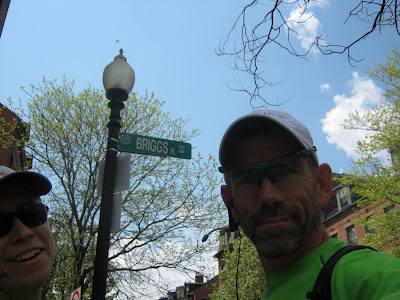 John chased this guy down in order to get the center square of our scavenger hunt tic-tac-toe board (someone on a skateboard): 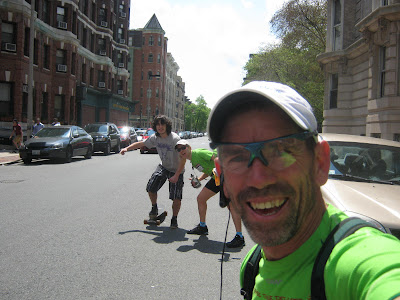 Shame on me for not immediately recognizing the red cover of Billy Joel's Russia album (signed by the Piano Man himself): 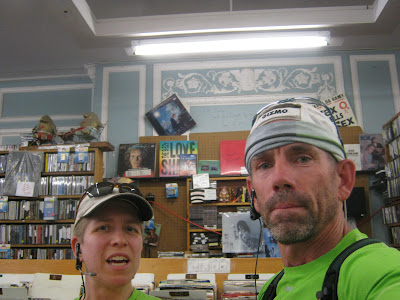 This clue wasn't written quite clearly, but they accepted our photo of me with fake facial hair and this very nice man with the real kind: 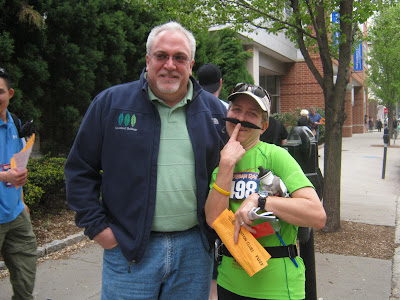 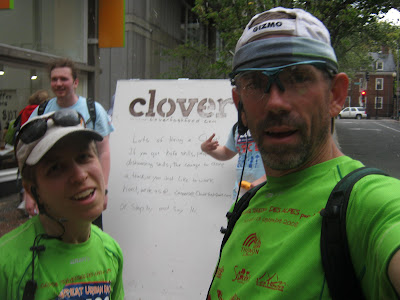 Everyone we met all across the city was so super-nice and helpful. We really enjoyed the whole experience of Boston. This man (the one you can't see) let us pretend I was honking the horn of his truck for another scavenger hunt photo: 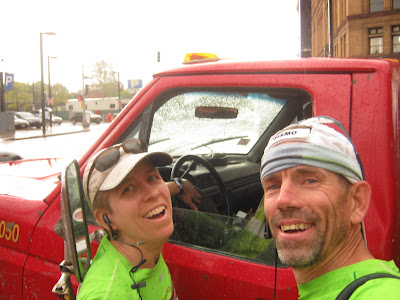 We made it back to the finish after 2 hours and change, putting us in 4th place. Just out of the money! But we qualified for the championships in New Orleans in November, so we hit our main goal. Plus we had a great time and I didn't yell at anyone :)
The winners of the costume contest - they were so much fun to watch: 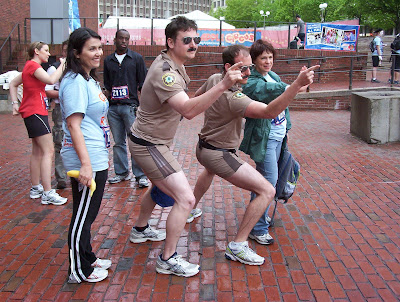 Next up - the biggest training weekend for Hardrock, i.e. the Massanutten 100-miler.
Posted by Marcy at 4:01 PM