It's not the start of a phone number - I'll explain...

The race started on the west side of Windham High Peak and followed the Escarpment Trail up and along the high ridge over to North Lake. There was a road at the start where the shuttle bus dropped us off, and a road at the end where people parked their cars, but that was it for civilization. Unless you included the rockin' aid stations in the middle of nowhere.

Speaking of which, I really should have done more research before race morning. The instructions told us to carry water, that there would be minimal aid and not to count on any. So I toted my light pack with a couple water bottles. At the start the announcement came that there were 7 to 8 aid stations. What? Well, that just made one bottle completely useless (and now empty). I could have easily gotten away with one hand bottle and a waist pack.

At the word "Go!" we funneled onto the singletrack trail, taking almost 2 minutes to get running behind the crowd of folks waiting their turn (and there were plenty more behind us). I seemed to pick a good spot in terms of pace, around people running up the less-steep inclines but still hiking up the steeper stuff. Soon everyone was breathing and working hard.

Nice trail through the trees - roots and rocks - switchbacks - pass a couple people here, get passed by someone there - trying to find a good pace for the first (and longest) climb. I was looking for a side trail landmark, but either it's now overgrown (unlikely!) or I was very focused on my feet/the folks around me (likely!) and I didn't see it.

So this made the climb seem really long, until I recognized some scenery and realized I was almost at the top, which was a pleasant surprise. Last time I was here everything was all white and cold. Quite a different experience today! 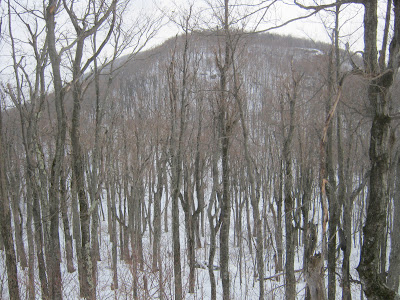 In less than an hour I was at the top, and hey! There's an aid station up here. Weird. I still had some liquid in my bottle, so I went on past and started down the first steep drop. Part of the fun of this trail is the challenge of big rocks, ledges, drop-offs, and little puzzles to figure out. I have some adventure racing friends who would enjoy this too.

I drank an Ensure and got to work on a couple short ups and downs. In the next major saddle there was another aid station, so I got some Gatorade from the enthusiastic volunteers who had hiked everything up there. I climbed up to Acra Point and started along a stretch of trail that I hadn't been on before. It was actually partly runnable, so I made a point to run as much as I could and keep my feet moving.

Eventually I caught up to a train of folks going just slightly less fast. I was (mostly) content to follow and recover a bit, as I knew there was a big climb not far in our future, and passing multiple runners is a lot of work. Other guys caught up and the train got longer. Finally someone couldn't take it anymore and the melee of people passing people started. Not one to pass up an opportunity like that, I jumped in front of the slower runners too and was back to running my own pace.

Another aid station at another trail intersection, and they told us we were almost halfway. They didn't mention the immediate challenge - the climb up to Blackhead Mountain. I had been up the mountain previously in training, but not up this particular trail. Oh, it's a doozy! 1000 feet just about straight up in less than a mile.

This got my breathing and heart rate up, I tell you what. Also, this is the point where I realized that I had been training all summer to climb - but at a reasonable pace. THIS was not reasonable. It was race pace, all-out barely on the edge of sustainable pace. My body was starting to question my logic. My brain wasn't getting enough oxygen to question or answer anything.

So we climbed, a group of us doing our best to scale the rocks and dirt. One woman was talking (?) and asked if everyone else was suffering too? I was lung-limited and could not answer. Finally we heard cowbells and there was the top. Oh my word.

Another aid station! Jeepers. I stopped to drink the Spiz I had filled at the base of the climb, and saw a couple women go by. Now that the focus of the climb was over, it was time to get a little competitive. Except my Spiz timing wasn't good, I should have downed it before the climb to let it digest before trying to run downhill. I had to take it a bit slower for a while, not to mention being careful on the technical down-climbs.

Someone came barreling down behind me, and I assumed it was a guy who had done this previously (we were going back and forth between uphill and downhill). Nope, it was a woman in a white shirt, just bounding down the hill and making it look effortless. I was amazed, and wondered what she was doing back here with me. Especially when I saw her ahead running uphill too. Apparently she started too far back and had been working all morning to pass people. Impressive.

There was a little climb, then a long downhill to Dutcher Notch. I made my last stop here to get water in a bottle and in my last Spiz baggie. Then on to the final climb. I knew this one was in stages (verified by another runner who had been doing this race for many years), each stage separated by a long flat section. Just when you think "maybe I really did reach the top already" there would be another climb. Look for the airplane! 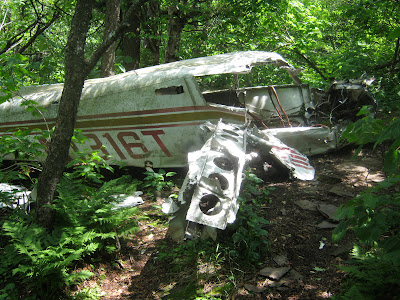 That's a photo from a training run earlier this year - I was back on a trail I had seen before (and it hadn't even had snow on it last time). My legs were so excited to see this, because it meant I was almost to the top at Stoppel Point. I must have been going at the proper pace for this length of race, because boy! was I getting tired!

Another aid station at the top, wow. I kept going, looking forward to some runnable sections. There were plenty of rocks to work around, but my legs were still game for hopping and picking up my feet. It was getting harder, but I was motivated to get my feet all the way over the rocks. I had only a couple little stumbles, all resulting in "good catch!"es.

We weren't quite to the real downhill part, but the runners around me were still moving at a good clip so I just tried to keep up. I passed a woman on a downhill (she had been a climbing monster), then found the final aid station at North Point. I accepted a cup of Gatorade, hoping that it plus a little water left in my bottle would get me to the finish line.

I passed a woman named Hillary on the rocky down-climb out of the aid station, and she was really friendly. There was more talking now that we were on more of a downhill section, plus there were some interesting down-climb challenges to laugh about. I ran ahead, looking for "Badman's Cave" and finally found it. 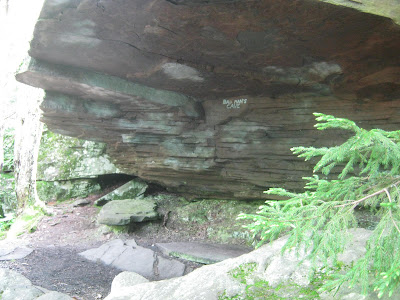 Plenty of technical trail right at the end - I was so glad I had seen this part before. My feet weren't excited, threatening to cramp up if I wasn't careful with my foot placements. I guess I was a bit dehydrated. I was certainly sweating up a storm. I had already taken off my bike gloves (seemed like a good idea for hand protection), hat, and sunglasses. The pack was good for schlepping stuff, anyway.

A couple more (slow) miles... a photographer appeared below me right at the most interesting spot in the whole course. Here's a photo from the race website of the guy who has been winning every year (Ben Nephew) - he apparently jumps down this drop. 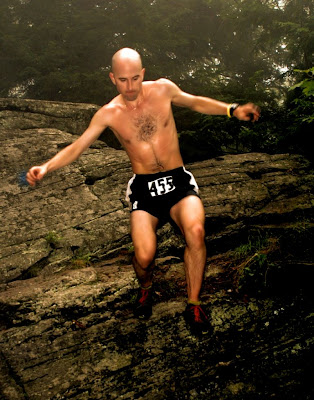 I obviously do NOT! I climbed down with the help of a nice tree. I'm sure the picture will show me clinging to its trunk - if they post the photo I'll include it here later.

And after long last - here it is: 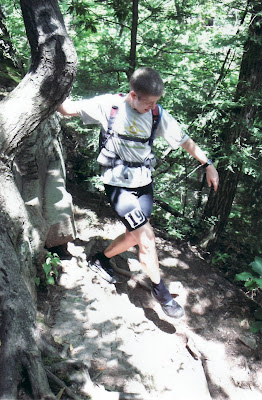 One kid came running past asking if I thought we could break 4 1/2 hours? I replied that I couldn't see my watch. He said we were at 4:23 - then not a chance. I wasn't completely sure what was between here and the finish, but I could think of several spots that would slow me down. Sure enough, there were those spots plus several others.

I kept pushing the pace, as I could hear runners behind me. No other women appeared ahead of me to pass, and I couldn't take my eyes off the trail to see who was behind. I made one small detour in the last section of trail (it would help to know this trail better) and then I was on the run to the finish chute. 4:41, and that was all I had. Phew, and wow! What a fun race.

I noticed I placed 8th female, and John mentioned that was the same as Hardrock. Amazingly, also the same as Massanutten! So the numbers in the title of this post are my placings for my last 4 ultrarunning races (starting with the TARC Don't Run Boston 50-miler - in which I was the only female, so that sorta doesn't count).