Yesterday I drove to the Burlington Landlocked Forest near Boston to run in the TARC Fall Classic 50K race. It's a relatively small park, packed with fun trails and enough room for a 10K loop that we ran 5 times. I was surprised how quickly the time passed even doing multiple loops - there was plenty of variety, whoop-de-doos and corners (would be fun on a bike), and it was interesting learning each section and getting a better feel for the course each time around.
I started a bit more conservatively than my last 50K at Pisgah, but still let my legs move at their own speed, and the first lap went quickly at just a hair over an hour. There were 3 other races going on at the same time - 10K, half-marathon, and a marathon. The last 2 had 1 or 2 tiny loops to complete at the start before following us onto the big loop, so plenty of fast folks passed me in the first loop. Later in the 50K I started lapping some other folks, but it wasn't ever certain who was doing which race. That made it easy to focus on only myself and not worry about competing with anyone.
Basically I had a time goal of 5:30 - surely I could beat my first-lap time from Bandera? The second and third loops went well, only a couple minutes slower each time and I still felt great. I drank my nutrition each time through TA and my stomach digested it by about the same point in each lap. Then I would feel great at about the same place on the course and be able to run well back to the start.
The woods and trails reminded me a lot of Rocky Hill Ranch and Huntsville SP. One section in the middle had us running back and forth and around and around, seeing other runners going in all directions. I was so relieved to come out of that the first lap still going in the right direction.
I was still running fine during the fourth lap, excited that I would see each section only once more and then I'd be done. I focused on drinking most of a full bottle of Gatorade/water mix each lap, especially as the day got warmer (maybe up to 80 degrees). It was beautiful and cool in the woods, but I knew I was working up a pretty good sweat.
As soon as I started the last lap, my right thigh started twitching. I immediately stopped and took an S-cap salt tablet. I wasn't messing around this time. It was curious that it was my thighs that were twinging this time instead of my calves. Maybe because the course was mostly flat compared to the longer hills we climbed at Pisgah, and I was working different leg muscles harder.
I still had to take it easy on the short (sometimes a bit steep) uphills to keep my legs from cramping. I did some deep breathing and tried to relax. I was happy that I could still run but disappointed that I have not yet figured out the cramping problem. The best I can guess at this point is some combination of lack of heat acclimation and not being ready to push hard for 5+ hours (i.e. need some faster running in my long runs to combine endurance and speed). This race I took in plenty of liquid and electrolytes, and it felt like my stomach was processing it all just fine.
I kept an eye on my watch, managed to keep a pace that was only slightly slower than lap 4, and actually passed a couple people along the way. One woman, I found out later, had been the lead female the first 4 laps. I had been running in 2nd place but never asked (I didn't want to know, truthfully). I passed her in the last lap, and while running to try to break 5:30 I managed to hang onto the lead.
Coming in at 5:27 and change, I was just happy to finally hit a 50K time that seemed reasonable. When they told me I was the first 50K female finisher, I was quite surprised. 2nd place came running in a couple minutes later. Wow!
A neat award! 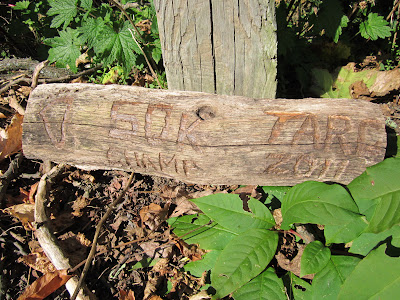 Another fun race on another beautiful day! And the leaves are starting to change up here, a wonderful combination with the multiple days of sunshine :)
Posted by Marcy at 11:07 AM