We were honored to have the opportunity to crew for our friends Steve and Murph at the 2012 Death Race in Pittsfield, VT this year.  This race is off-the-charts when it comes to "crazy" and I have no idea how they managed to keep going day and night through all of the tough challenges - mental, physical, psychological...  They carried 60-pound bags of Quikrete cement up a mountain.  They spent hours lugging a heavy kayak through singletrack trails.  They built a driveway.  They sat in a cold pond for 45 minutes.  They split countless logs.  They did mental puzzles and origami (!).

I certainly can't answer the "why" question.  And at the race, I couldn't answer much about the "what" "where" or "when" either - the race organizers did a stellar job of keeping the crews completely in the dark and running in all directions chasing rumors.  The racers performed a few quick tasks around TA on Friday afternoon and then took off, disappearing for over 24 hours before we finally caught back up with them on top of the mountain.  I did have fun riding my bike around the dirt roads trying to figure things out.

They eventually started coming into TA a couple times, but mostly they had to be self-sufficient somewhere else on the course and we didn't get to help too much.  But we managed to document a couple of the tasks at least.

Jumping in mud at the direction of a young girl (the kid had fun with this one): 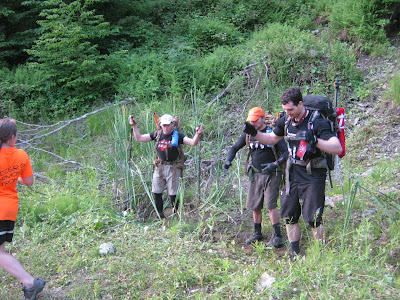 Lugging dirt to fill in some wet spots on the bike trails: 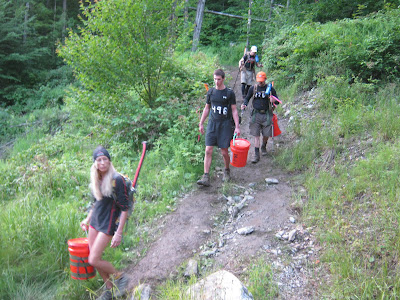 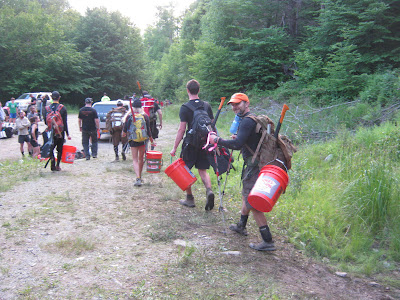 The elusive stakes... that's another story I can't begin to explain: 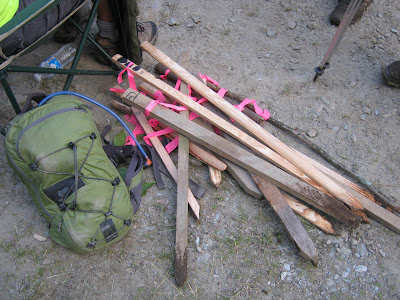 Cutting up and splitting a log so they could carry 12 pieces down the mountain: 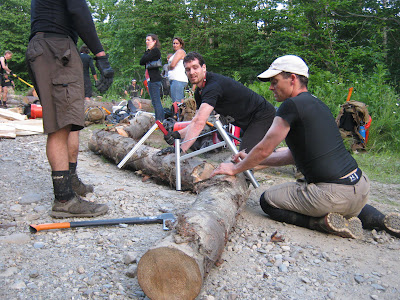 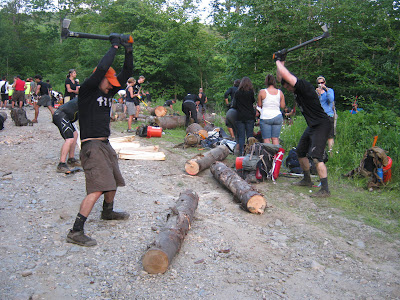 The din and flying bits of wood were impressive: 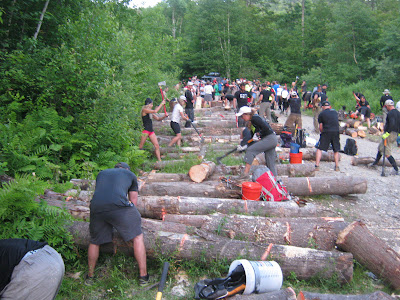 John liked to capture photos of logs in mid-split: 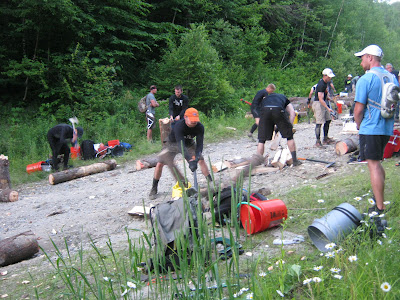 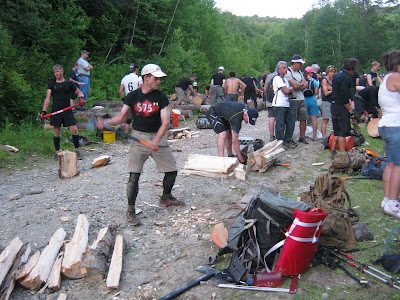 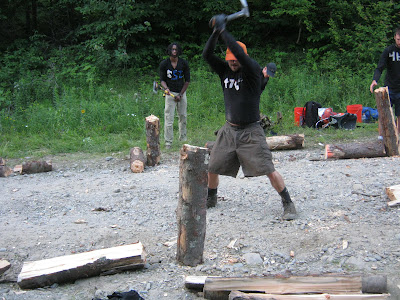 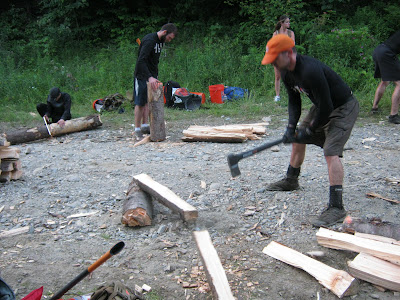 Moving bales of hay into a barn (I believe the guy on the right in the green glasses is Olaf, the eventual winner): 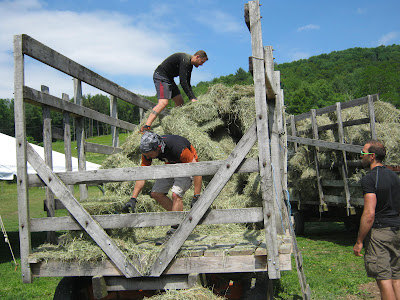 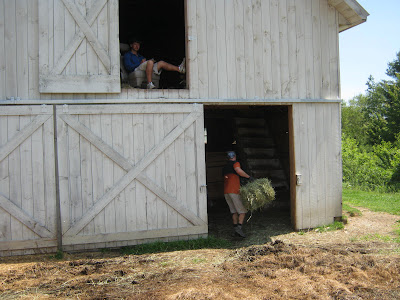 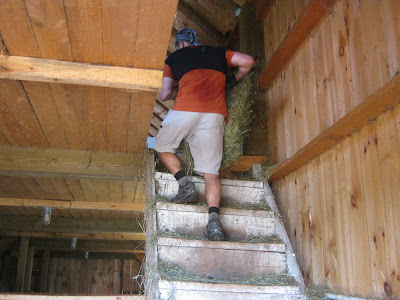 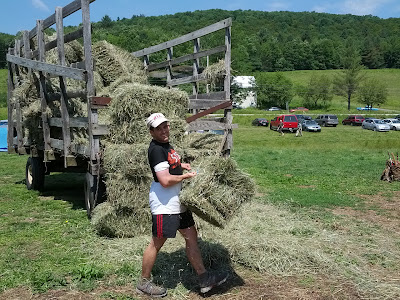 The "frog" that Steve stopped to stare at: 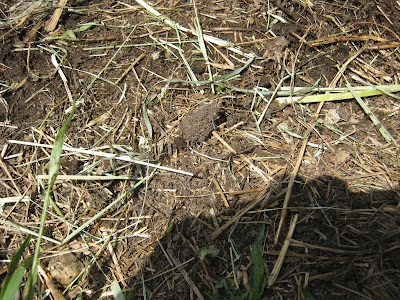 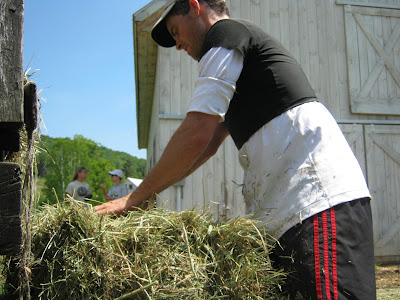 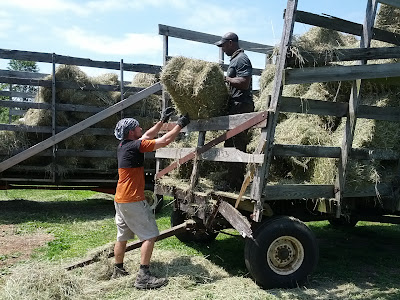 Heading back to TA to pick up the concrete bag: 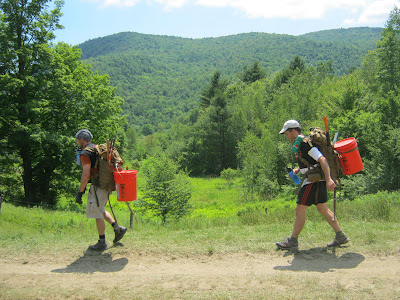 At least they had good weather all weekend (although it was rather hot): 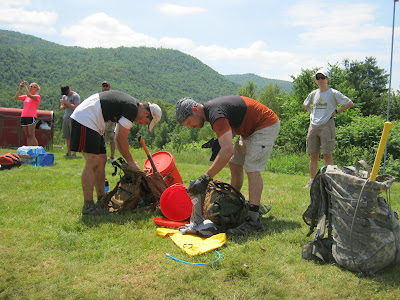 John taking a break from watching all that effort (and this packraft will make an appearance - and disappearance - in a subsequent post): 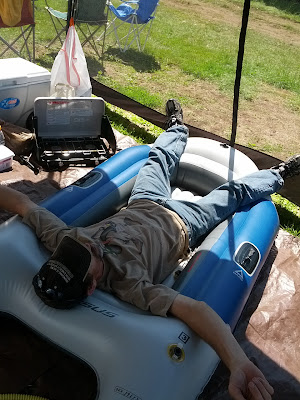 In the end, both Steve and Murph FINISHED the entire event, never quitting, never giving up, sticking together and finding a way to persevere.  Only about 10% of the starters managed this feat, and it took until late Sunday night to get there.  Truly amazing and inspirational!!  Congratulations to them!