The race started on a dirt road next to the Kennebec River.  We would eventually be required to packraft in order to reach a small island and the opposite shore beyond, but in the beginning we had a choice between putting in immediately vs. running down the road/trail a couple kilometers.  We opted for the cautious choice of running first, trying to avoid an immediate packraft-on-rock disaster, since we didn't know exactly what to expect on the water and we were using Sevylor packrafts (not know for their durability).

Here's what we missed down at the water just after the starting gun (I wouldn't say I was missing it, Bob...): 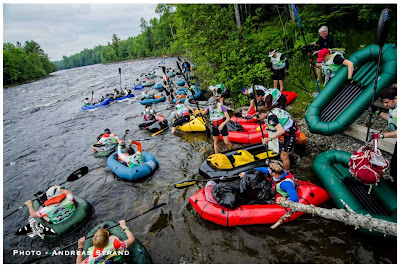 Instead we, and a bunch of other like-minded teams, took off running down the road.  Some folks had already inflated their rafts.  We decided not to, giving us the option of bushwhacking further along shore to miss any rapids before putting in on the flat lake.

We ran along, took a side road down to CP1, and then returned to a 4-way intersection to find a trail that followed the river further.  Not long later the trail died out.  We were close to the water, and it looked benign, so we jumped down to the shoreline to start raft inflation.

Unfortunately, one of the rafts had a small hole along the back seam - d'oh!  Druce and Dima quickly got out the patch kit and took care of it while Val and I assembled the paddles and got the other raft inflated.  Fortunately, the patch held, and we were soon on our way.  Teams were passing us on the water, but we didn't fret about it, instead focusing on getting ourselves moving again.

The little bit of rapids in the river were great fun!  There was plenty of current and not too many rocks to avoid.  It looked something like this: 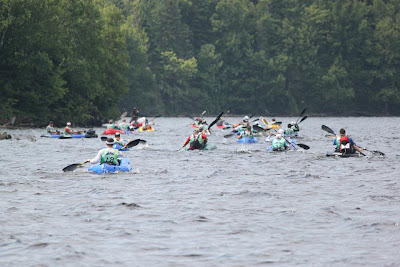 A couple spots had short drops between rocks and we got plenty soaked, but all around it was entertaining.  Toward the end of the river we could see only the heads of racers ahead of us, meaning there was some kind of drop between us and them.  Druce took an excellent line and we came over the top of the rushing water in the middle of the downstream V.  I got a bit excited and asked "Druce, what are we doing?" and he answered "I'm steering!"  We got more wet from the landing, but the boats held up great and I was giggling by the time we got to the flat water.

Ah, back to calm.  The river opened up at the top of a long lake, with an island right in front of us.  We paddled up to the island with a bunch of other teams and took turns scrambling up to CP2 to punch our wristbands (some checkpoints required a wristband punch per person in addition to the passport punch).

A bit more packrafting later, and we rounded a point to find a gaggle of canoes and kayaks waiting for us.  Time to put the little rafts away - that was a nice opening event.

We jumped into the larger crafts and set off down the lake.  It was a beautiful day, the lake was gorgeous, and we had survived our first packrafting challenge.  A seaplane flew around, even looking like it was going to land in front of us before flying right overhead.  Very cool!

Texas Adventure Racing Club paddled near us, and we admired Gabe's ability to paddle the solo kayak faster than most of the canoes.  It was fun chatting with them here and there on the first day.

I helped with compass bearings as we made our way down the lake, and Druce (in the single-person kayak) worked on staying in the canoe's draft.  We didn't bring the middle seat for the canoe because we were concerned about losing it in the upcoming whitewater section, so I sat on a packraft instead.  The one without the patch, obviously...  It was passably comfortable for a couple hours, and in fact better than a sling seat.

Across the last wide-open section of lake we could see the giant dam building to the right.  Our team had various suggestions that it looked like a circus tent, a church, a jail... and we weren't even sleep deprived yet.

Several teams ahead seemed to be going too far to the left, while we decided to stay with our compass bearing and aim for where the cars were parked.  Eventually the boats ahead of us veered to the right, and we all converged on the next checkpoint.

The volunteers got a couple nice photos from here: 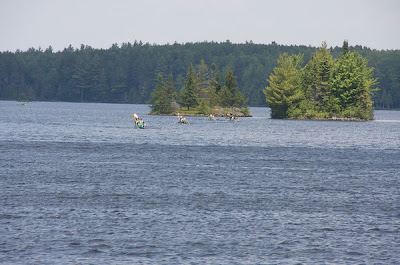 Briefly feeling like royalty, or "it's not easy getting up off the bottom of a canoe when your teammates are in a hurry": 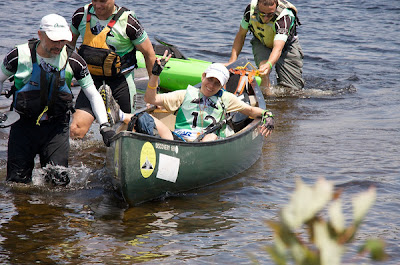 Unbeknownst to us until later, John was actually spying on us.  He snapped some shots of us transitioning to the whitewater boats.  It's probably good we didn't see him - we were rushing to join another team to get on the water (2 teams per boat) and I was already running behind trying to waterproof and secure everything that was important to me.

The other funny thing was the elevation chart for this leg of the race.  It went downhill (or flat, for the lake miles) from the start almost to the end of the leg, including one huge step downward.  I was not looking forward to THAT rapid.  Actually, it turned out to be a huge set of stairs, built just perfectly for bringing whitewater rafts down to the river... 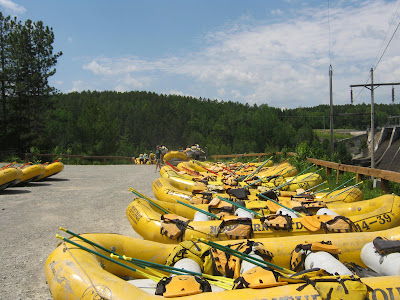 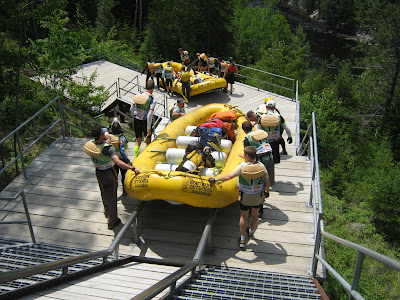 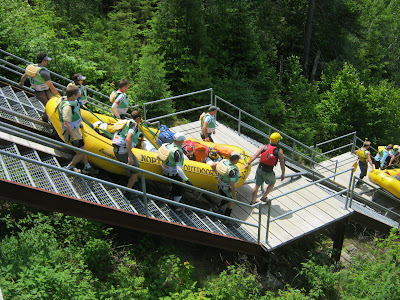 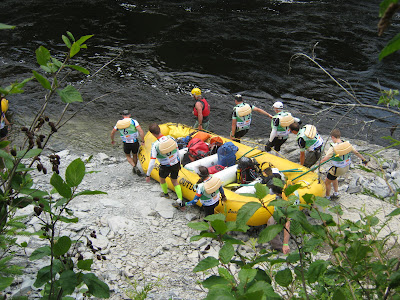 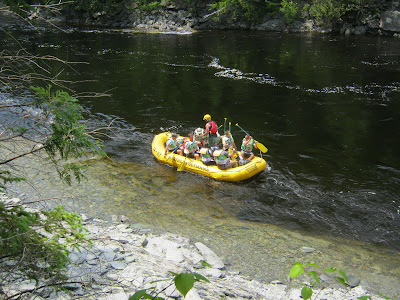 Our guide was totally serious and had me going for a while thinking he was really concerned for our safety (Val told me later the guy was grinning about it).  We took his commands to heart and the whole boat repeated them to make sure we could all hear "PADDLE LEFT!", "ALL FORWARD", "We have to miss this hole, PADDLE HARD!!!" 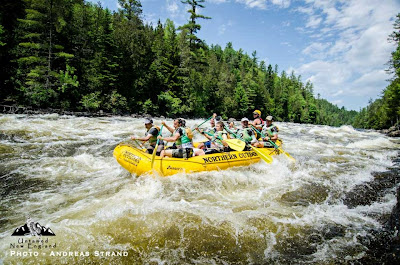 Some of the waves were huge, the largest I have ever experienced in whitewater rafting - apparently the race folks were able to work with the dam engineers to release the right amount of water for an amazing ride down the Kennebec River.  Wow, is all I can say!

There were photographers at the Magic Rapid, always a sign of something interesting.  What a giant wave it was, the pictures cannot do it justice.  Here's where I got a mouthful of water and had a bit of a coughing fit, but I kept paddling - gotta keep a paddle in the water! 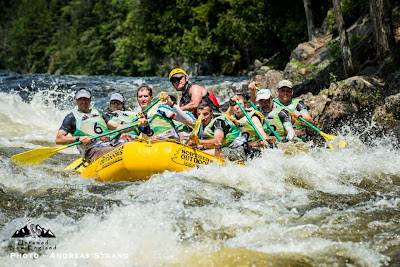 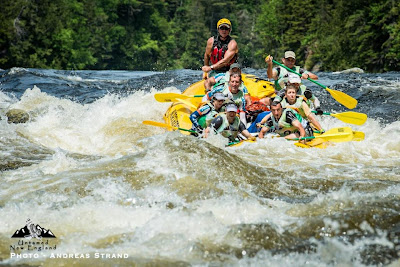 Druce (in the front) kept getting tossed into the boat until he figured out how to brace on the incoming wave. I kept telling him not to fall out, because if he does, I'm next in line.  All the while, we could hear Val in the back laughing and laughing.  I think Dima and I were most happy when the biggest waves were over and we could relax and float for a while.

We all still wanted to paddle like we were racing, so our guide managed a maneuver around the boat in front of us, and we passed the Texas team right before landing on the shore, too funny.

Finally on land again!  Well, we got some of the wettest stuff out of the way right off the bat.

We followed a side creek on a pseudo-trail until it disappeared and then hiked up through the woods to find the actual trail.  Easy nav on trails took us around to a waterfall and the next checkpoint.  Very nice!

The next few photos are courtesy of John who somehow found a way to get here ahead of us and continue to take "spy shots" of us. 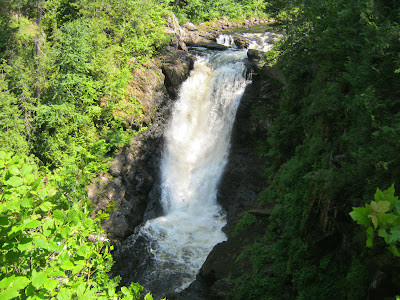 Sneaking up behind us: 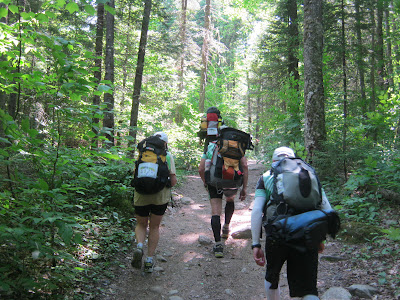 I thwarted his maneuvers by stopping to pee, so we got to chat with him on the trail for a short ways.  We had a lot to babble about, specifically patching the packraft and tales from the whitewater section. 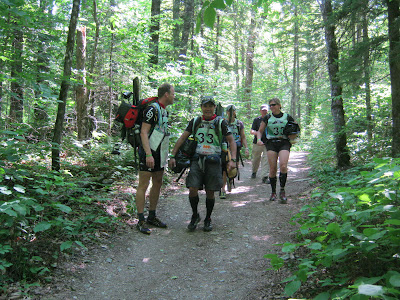 A short bit on trails got us to the first TA... section 1 complete, and what fun it was!