GUR in the City

(Continuing my recent trend of "out of order blog posting", here's the news from last weekend; the Bitter Pill AR will get a report of its own at some point... the summary being that we had a great time racing in VT the weekend before last!)

Back to NYC for another urban race!  Our fabulous friends Ron and Jerome were again our hosts, providing delightful stories, local knowledge, and a convenient place to stay on the Upper West Side.  A short subway ride to the 79th St Boat Basin, and we were ready to start the Great Urban Race, New York City edition.

This time we did a better job with studying and practicing on the subways, although this is by far the most complicated system of public transportation we've ever dealt with for an urban race.  Quite the challenge!

After getting our clue sheets, we opted to skip the subway ride altogether and just run south on West End to 11th St and down to American Retro for our Miller 64 challenge.  John made quick work of the challenge while I tried to recover from the fast run.  Running seemed like a good option at the time, but the blocks would start to wear me down by the end.

Anyway, we were still going OK at this point: 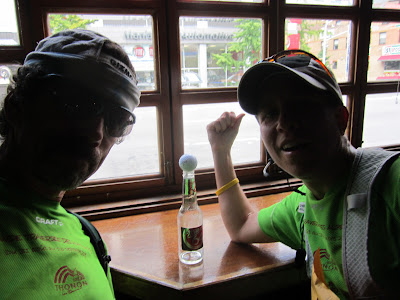 On foot heading back toward the subway lines, Sheila and I discussed where to go next.  I suggested we try the checkpoint that was furthest south and we could work our way up from there.  Greenwich Village it is!

We jumped on the subway and took a closer look at the tic-tac-toe board (needing to get 3 scavenger hunt items in a row).  Yankees shirts, a truck selling gyros, these didn't sound too bad.

Back above ground, I called Sheila who had some bad news.  Our cupcake place wasn't in Greenwich Village, but much further north. We were down at West 4th Street, and our next closest clue was up on 21st Street.  Ouch.

Well, CP3 MIGHT have been closer (a yoga challenge over on Broadway), but our crew was still working on that one.  By the time we all realized its (approximate) location, we were long gone from the area.  It actually sounds like we dodged a huge bullet on that one, as we heard later that many teams spent a lot of time trying to find it.  It's really too bad, as the clue sounded very cool (enter a key code to get in a presumably unmarked door and go to the 4th floor to do some kind of inverted yoga pose).

We better retrace our steps a bit then. I couldn't quite hear Sheila regarding the subway options, but it seemed like we would have to do some running no matter what.  While trying to figure this out, we bought a postcard with the Empire State Building on it from a street vendor (part of the tic-tac-toe).  Bagging the subway in favor of running, we dashed north along 6th Avenue.  In hindsight, we could have worked harder to get back underground for this section.  Our legs would have thanked us later.  Good training!  And we saved $4.50!  Hmmm...

So we ran, eventually making it down a side street to the Abracadabra Super Store.  Magic!  I immediately nominated John to do the challenge.  That worked even better (for me, not for him) when it turned out to be a worm-eating challenge... but he didn't flinch nor even pull out the vegetarian card...  I actually had to slow him down to get the requisite mid-challenge photo: 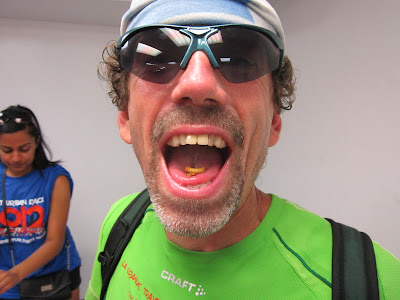 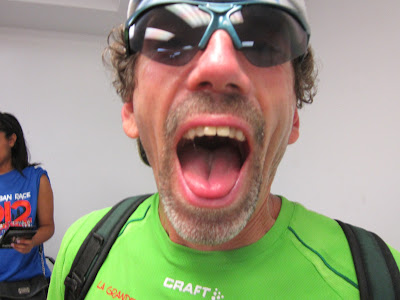 We ran back outside and around the corner to McDonalds.  We didn't even have to go inside to find an empty french fry container with the golden arches on it, so we stashed it to carry to the finish line as proof of completion for CP11.

Several blocks west and north to a parking lot where there were several cars.  We had to write down a few answers and then get our photo with one of the Chevy cars, a pretty red Cruze.  John took time out to practice his levitation skills: 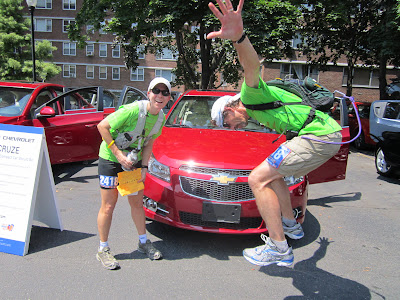 Next checkpoint was 14 blocks north.  We could either backtrack to 23rd St to catch a subway or run up 8th Avenue.  Backtracking?  Apparently I was still feeling peppy, because I nixed that and we started running again.  Somewhere in this section I started counting blocks and hoping for more red lights to catch my breath...

We found the Drama Book Shop on 40th Street and ran up to work on the rebus puzzles posted in the window.  This checkpoint is the other spot we got really lucky, because the clue sheet said it should have been on 8th Street.  None of us noticed this error, nor did we spend time looking around on 8th Street as other teams did.  Normally a lack of attention to detail turns into a problem for us.  This time the oversight somehow worked in our favor, but I don't expect that to ever happen again.

In the meantime, the rebus solving went well and we moved on to the next checkpoint.

Finding the library and Bryant Park was the easy part.  Finding the actually challenge turned out to be the hard part.  We went through the park, out to the street, located the "Bear Naked" truck parked on 40th Street, went around to the front of the library, and finally ended up back where we had started.  Which is where the challenge was!  We had walked right past them...

In the middle of all that, at least we spotted some "I Love NY" T-shirts and got our photo for the center square of the tic-tac-toe, so that was something. 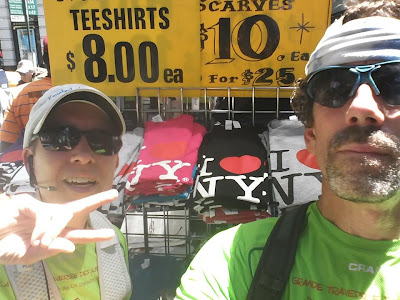 John took on the pedometer exercise while I tried to upload the picture to Facebook.  We're such newbies with these smart phones!  Suddenly John was done and I was juggling John's phone, the non-phone camera, 2 stickers, 2 packages of granola, my water bottle, and a pen... we did manage to get our act together so the volunteer could get our photo at the checkpoint, before I dropped John's phone on the ground: 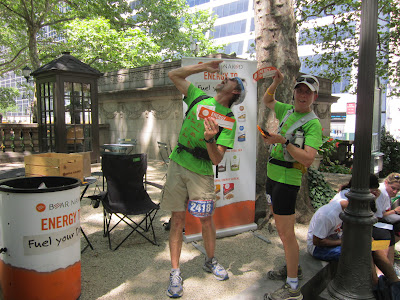 Still, the photo wasn't uploaded by the time we jumped down some stairs to finally take another subway ride, and we fought with the whole "upload the picture to GUR's Facebook site" for a while.  But eventually we got it, phew!  I need more smart phone practice, that's for sure.

Anyway, we finally took another subway ride.  The F-train took us north to 59th/Lexington, and while we waited for it to arrive we worked on the tic-tac-toe some more, as we now knew we needed to complete it instead of possibly skipping it.  We had been trying to spot a couple folks wearing Yankees gear for a while but never managed to find any.

Back above ground for our shortest running leg of the day, maybe one block to Pylones.  John got a finger tattoo of a sheep (yes, I did just write that sentence) and we went into the store to locate another sheep to take a photo with.

John found this completely adorable little guy to pose with: 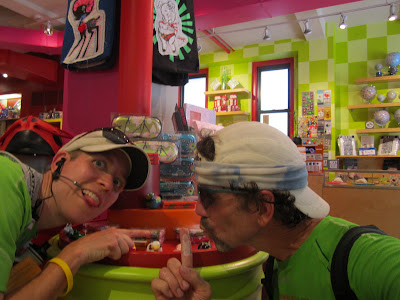 A short run south to Sprinkles for our cupcake!  And a logic puzzle.  I'm still struggling with the details of that (the puzzle, not the cupcake), but I guess we got the most likely possible answer because it matched what they wanted at the end.

After that we started on a quest for street names made of prime numbers.  We needed 3 of them, and we were in a good spot for it.

59th Street - trying to keep my ear bud in with all the sweating - have I mentioned it was rather humid out? 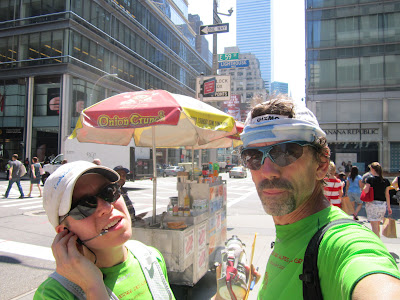 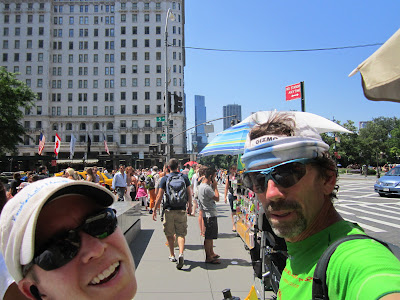 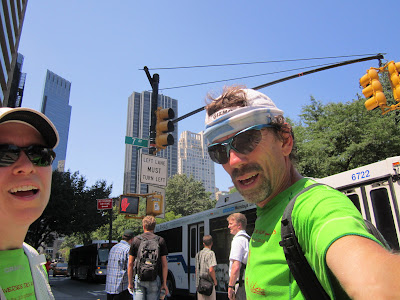 We made it across the bottom of Central Park and over to Columbus Circle where we bought 2 items for Ronald McDonald House (the race charity) in exchange for a flyer.

Then up a couple blocks to the American Folk Art Museum - a museum, cool!  We located the Encyclopedic Palace of the World to count a whole slew of windows in the bottom 3 tiers.

The clue sheet made it very clear that they wanted only the rectangular windows.  So we skipped the odd-shaped panes with diagonal edges.  We also skipped the 8 doors at the bottom, because according to my house construction-knowledgeable husband, a "door lite" is not a window.  The counting and multiplying and adding took a while, as you can imagine!

In short, 36 windows for each floor; 49 floors of rectangular windows; minus 8 doors.  Our answer was 1756.  Depending on how the concept of "rectangular window" was interpreted, I would think the following answers would also work: 1764 (counting doors as window), 2080 (adding the additional 9 floors with nonstandard windows), and 2088 (doing both).

We were so close now - all we needed was to finish the tic-tac-toe.  Happily, Sheila found a pub for us not far from the finish line.  Thank you Sheila!  We hopped on the subway for one last ride, then ran over to McAleer's Pub on Amsterdam.  A nice lady found an old takeout menu we could have, so we thanked her profusely and then dashed downhill to the finish line.

Wow, that was a lot of hard running.  As we crossed the line, the volunteer asked if someone was chasing us?  Well, there is always that possibility!  You never know with these races.

At the photo check, everything was good except we did have a discussion about rectangular windows.  They agreed to take our answer as an alternative to theirs (2088).  Apparently there was supposed to be an additional instruction sheet on location that they weren't allowed to post on the wall, and we never saw it.

So we won the race - which is exciting of course - but many teams were justifiably upset over the clue sheet and challenge issues.  We have done so many awesome Great Urban Races, it's a surprise when something like this happens.  I expect the GUR Crew will work hard to figure out how to prevent it from happening again.  I hope so, because we will certainly be back for more! 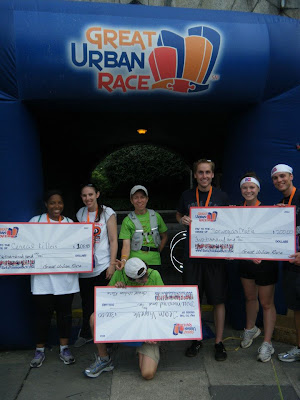 Our Sunday long run was much calmer - along the Hudson River pathway, discovering the Highline walkway (neat!), Brooklyn Bridge, Flatbush Ave, Prospect Park, Ocean Parkway created by Frederick Law Olmsted, and Coney Island!  We were ready to sit down after that...