Oddly, for all of the mountains we have climbed, somehow we had never made it to the mountain with my name on it.  Mt Marcy is the highest point in New York, for goodness sake!  Last weekend we set about to rectify that situation.

Mom started out hiking at the crack of dawn not long after we left our driveway in Albany.  It wasn't really an official race, but John and I got a good workout trying to catch Mom before she reached the top.  Today Mom prevailed - she was moving well!

Plus I stopped to take a photo of Marcy Dam (yeah, that's the whole reason we lost the "race", not because I didn't want to get up any earlier...): 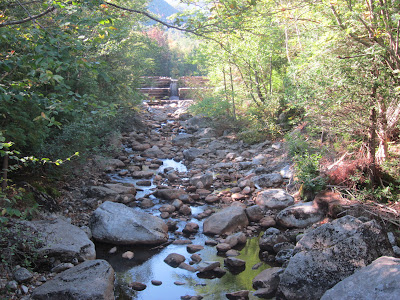 What a beautiful day for a hike in the ADK's!  A glimpse of the summit from half a mile away: 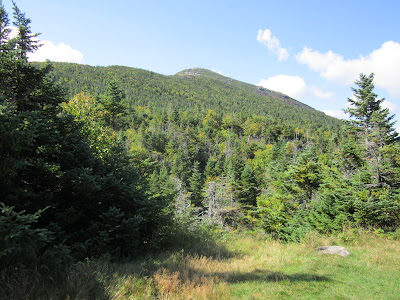 Mom even slowed down to let us catch up at the end, but only John was able to reach her within several minutes of her arrival at the top: 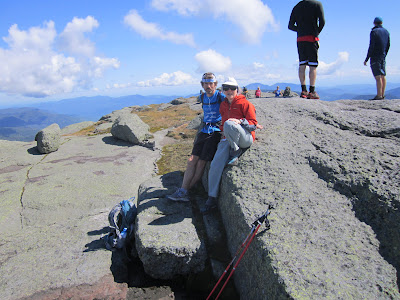 I followed a few minutes later, then we found a spot out of the wind and in the sun for some snacks and chatting and smiling at the views: 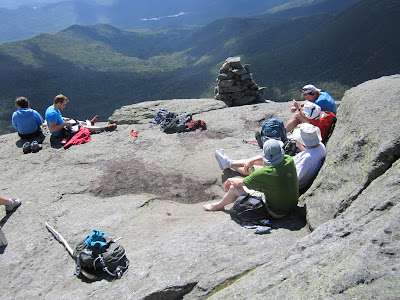 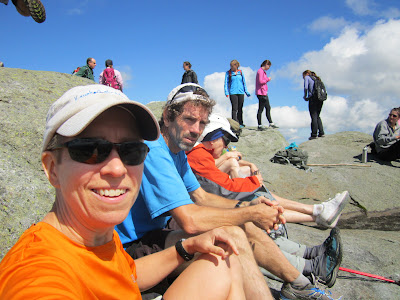 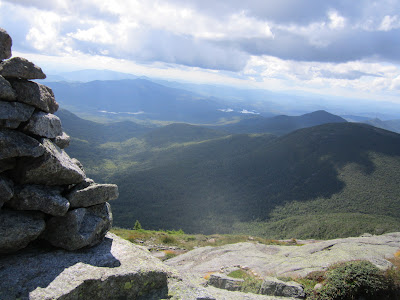 The requisite clowning around and such with our summit shots and yoga on the rocks: 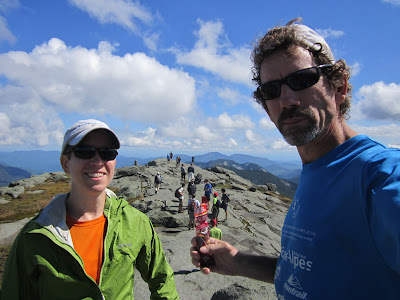 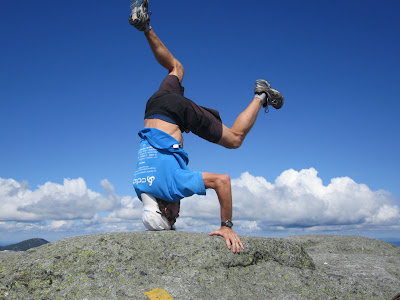 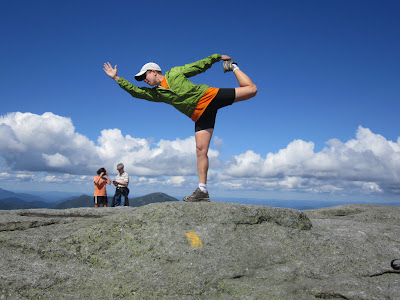 Even Mom got in on the action! 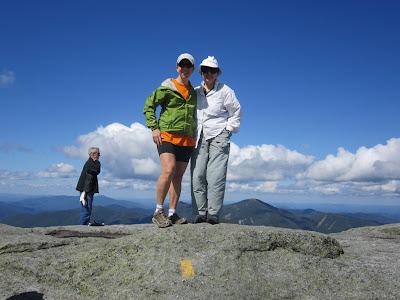 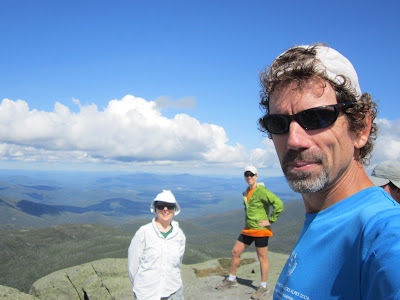 It turns out that Mom has accompanied us on 1/4 of the high points we have reached so far. Cool!

Mom took the normal way down while we headed to the next peak over for a detour and more training.  Starting down the backside of Mt. Marcy: 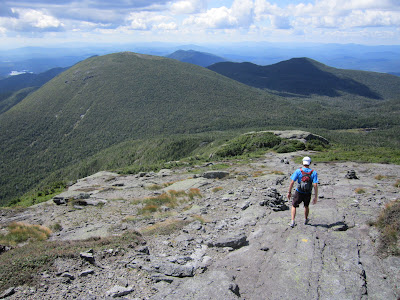 And at the top of Mt Skylight: 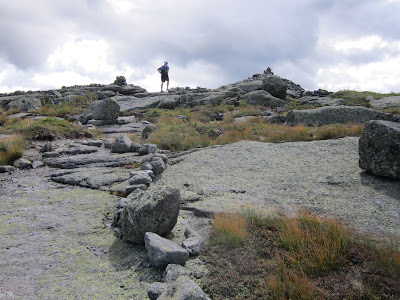 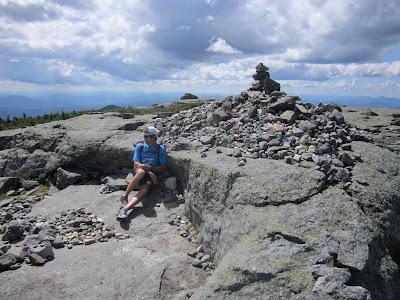 It was really quiet on Skylight except we could hear an occasional echo of a voice from Mt Marcy.  We also had a great view of the high point: 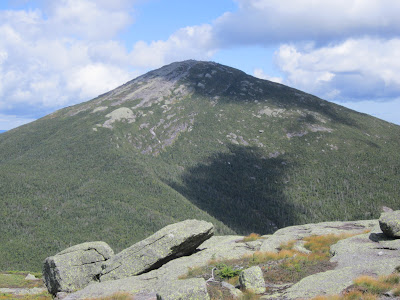 The trail we ran down: 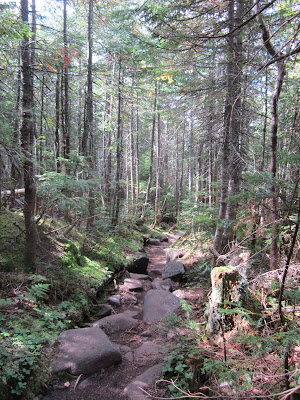 Can you see the toad in this photo? 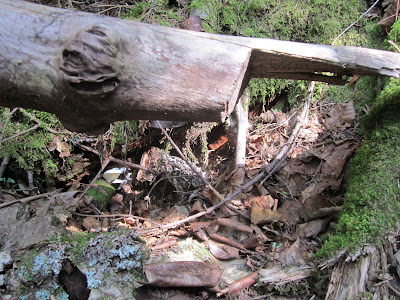 We hiked along a stream that had several big drop-offs into narrow gorges with steep rock walls.  It reminded us of slot canyons in Utah.  My best attempt at getting any kind of a photo without actually getting in the crevasse... 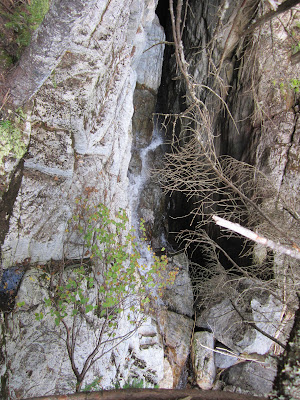 We have decided to start a new series called "Where can John sleep?": 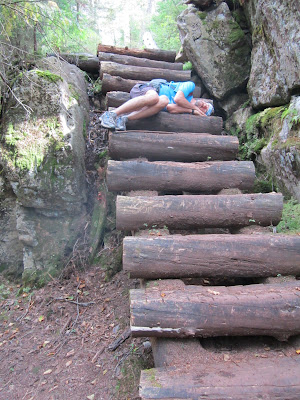 Finally reaching the bridge over the stream so we can start north back to where Mom would soon be waiting: 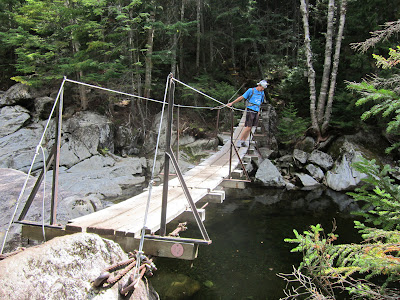 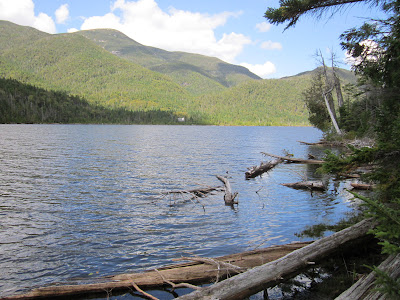 Mt Colden, with impressive rock faces and slabs down the side: 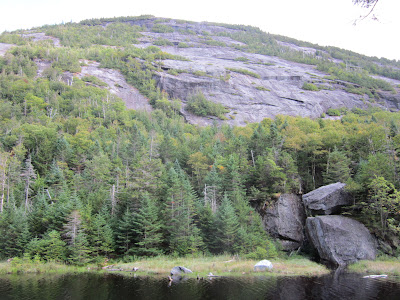 Avalanche Lake - "avalanche" is another word (along with "volcano" and "waterfalls") that tends to indicate interesting things to see: 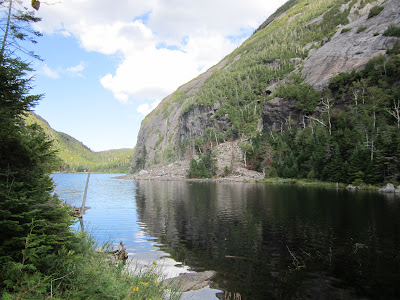 I have never seen anything quite like this!  The geology and scale are fascinating: 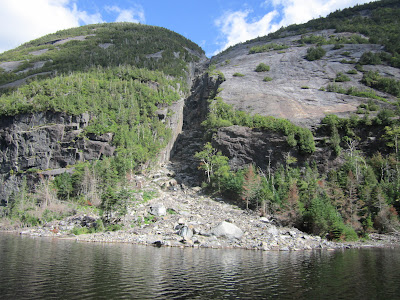 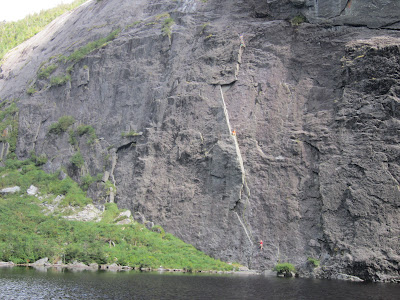 And a crawly creature that didn't mind posing on the near wall: 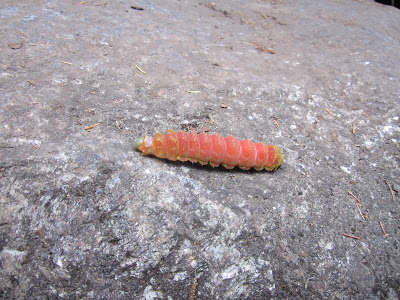 A marvelous day with excellent company!  I'm already plotting how to get back to climb some more High Peaks.