On Tuesday the doctor removed the front wires that were holding my mouth closed.  Finally free!  Sort of, at least.  Free enough to celebrate being able to open my mouth after 25 days.  Phew!

The wires on the top of the sparkling grape juice look awfully familiar... 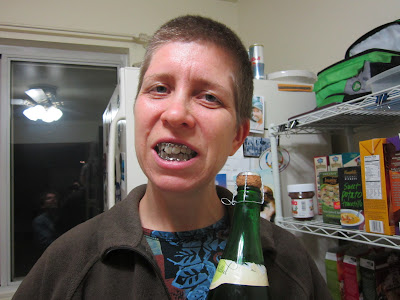 The biggest "yay!" is being about to run AND breathe at the same time.  I don't need to clench my mouth closed to keep my teeth from jiggling.  I can get enough air in - as much as my current fitness level will allow. Time to ramp up (slowly of course) on the training.

I talked with a guy at work yesterday who had a bike accident a couple months ago - avoiding a dog, oddly enough - and broke his hip.  He was on crutches for a while.  I had a hard time deciding whether, given the choice, I would pick eating vs. running.  I still don't know, quite honestly.  It does make me thankful once again that the only things I fractured were above my chin.

The second biggest "yay" is being able to brush the insides of my teeth!  Ahhh, finally clean again.  I'm looking forward to a real cleaning at a dentist after all this.

I had assumed that eating would be a huge "yay" but that is taking some time and practice.  For sure, drinking is much easier and I'm very happy about that.  I no longer deal with little bits of stuff getting caught in the wires and blocking up the food access ports.

I'm using a spoon again, which is awesome.  Yogurt was the first achievement.  Applesauce!  Then soups - pea soup, potato/quinoa/spinach, anything that is really soft and doesn't require chewing.  I need to try again with the lentils and make them softer (or blend them) so they are more mushy.  Trader Joe's frozen sweet potatoes in the microwave are heavenly.

The doctor said I can chew soft food, but that is taking some time to get used to.  I worked my way through a small plate of white rice last night because that's what I was craving (first step toward the sushi that I really want).  It took quite a while and a glass of beer to wash it down and subsequently a lot of teeth cleaning, but I did it!  My teeth are tender and those wires on the roof of my mouth are really in the way now (trying not to complain TOO much).  Baby steps...

The only slightly positive thing I can say about those wires is that I've taken to blowing bubbles with them to amuse myself.  No one probably needed to know that.  Neither do you really want to see them, mostly because it involves a close-up of my face... I'm on the fence as to whether I'll post a picture at some point.

I'm using elastics to keep my mouth stable at night for a week.  This is a pretty minor inconvenience in the grand scheme of things.  But I'm counting down the days (nights) anyway.

My weight is stable, happily.  After losing 3 pounds immediately after surgery, my weight leveled off and hasn't fluctuated since.  I guess my food intake is working OK.  I'm still drinking one serving of Spiz each day to keep a good variety of nutrition while I experiment with what else I can eat, and I'm still doing smoothies and soups, but I stopped the Ensures at least.

No telling what will happen when I can really start eating - trying to figure out how much self-control it will take not to go crazy with that...

My doctor told me to exercise my jaw and get it working again.  The word "exercise" is right up my alley.  My jaw muscles are still stiff from being closed for so long, and there is a part of the arch bar that rubs the inside of my cheek in the back, but I'm doing my best to improve the range of motion.  Three days out, and I can fit 2 fingers-width into my open mouth.  Look, my tongue is visible! 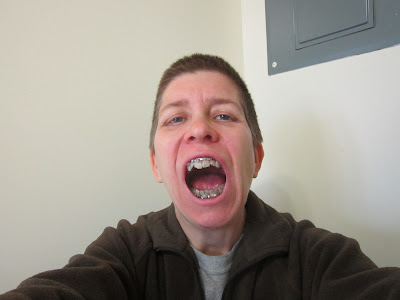 Next stop = January 2 for removal of all the hardware.  That will be a big YAY!