We were very excited to return to New Orleans and run around the city finding interesting checkpoints.  Not to mention it HAD to be warmer down there.  It snowed every day for the first 3 days of April in Albany.  Yeah, it has been that kind of winter.

I wasn't so excited to be nursing a hurt foot.  Still not sure what's up with it, but I had to stop running for a couple weeks and start hoping it wouldn't cause problems during the Super Dare obstacle course or urban race.

Besides the foot thing, our prep and travel went well and soon we were eating fried green tomatoes and calas for breakfast at Elizabeth's: 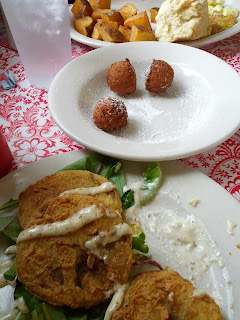 It was also great to be reunited with our teammates Kip and Dave, always fun spending a weekend catching up.

Friday's highlight was spending an hour at the Contemporary Arts Center checking out the "Beyond Beasts" exhibit about the movie "Beasts of the Southern Wild".

Saturday events included an obstacle course in City Park and a trivia quiz at a bar on Bourbon Street.  Our two teams ended up neck-and-neck with the defending champion Nads after the obstacle course.  John and I managed a half-decent showing in the trivia portion (better than on the cruise, which isn't saying much, but still we weren't too disappointed).

Starting the race on Sunday John and I held a slim lead over the Nads in overall time.  Kip and Dave were a few minutes back but not out of the picture.  Anything could happen.  Especially in an urban race without a "skip point" option, one mistake is all it takes to cause some problems.

Things were going swimmingly at the beginning.  John and I scanned the clue sheet and started toward the Margaret statue near the Expressway.  Hmm, quite a few clues here (18 total including a bonus point), that should make things interesting.  Sheila informed me that our two teams had the clues in different orders, double interesting!

I caught sight of another answer, so we stopped by the Winston Churchill statue but missed the perfect opportunity to flash a couple "V for Vignette" signs to mimic the gesture Winston is making behind John's head: 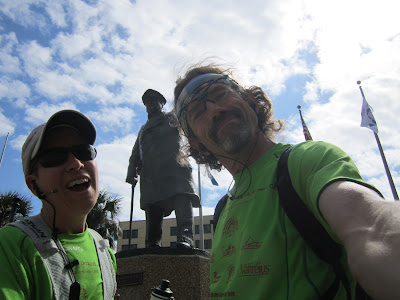 Sheila helped us verify the location of the scrap house which was next along the way: 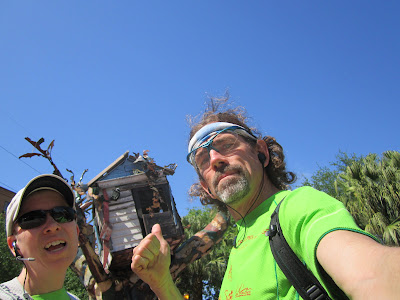 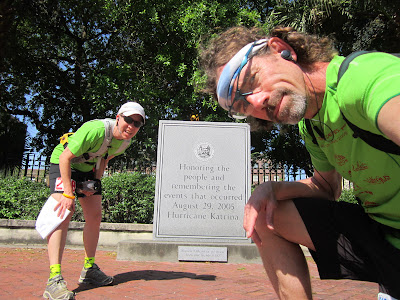 OK, now we can finish the jog over to Margaret, where we completed the "Scrabble Stick" dare.

Right across the way we located a Victory Garden at the WWII museum: 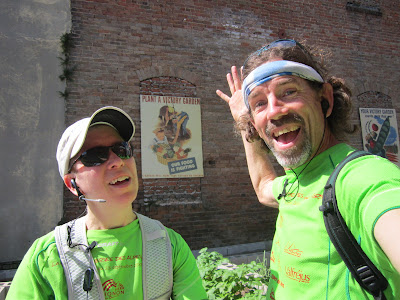 Then a dash over to Lafayette Square to find our buddy Henry Clay and a volunteer with some gum.  John offered it to me, so I gamely tried to chew the sugar out of it enough to blow a bubble.  Eventually the volunteer took pity on my bubble-blowing patheticness and stamped our passport.

We went through the list of "what's still unsolved" with Sheila and thought we had everything done.  Sweet!  Now we just have to run.  Starting with a 3-legged "dash" around a park at Loyola and Perdido.  We're still none too graceful at that but by the end it almost appeared like we were starting to get the hang of it.  Heh.

Next back to the French Quarter for a shot of "The Birthplace of Dixie" plaque which John appears to be taking the time to read: 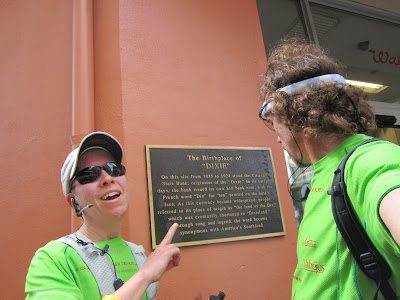 Next we aimed a block down, overshot it and came back, and then found a business that was completely shut down.  Nothing here whatsoever, certainly not the statue of David we were searching for.  "Sheila, we have a problem"

Nothing to do at that moment except continue on, as our crew was still working on the answer.  We looked along Royal Street and saw quite a few statues of various Greek gods and knights and other things that suggested SOMEBODY might have a statue of David we could use.  Hmm.

Back out to Canal Street for a quick shot of the bonus answer, the "Era of American Domination" plaque on a pole: 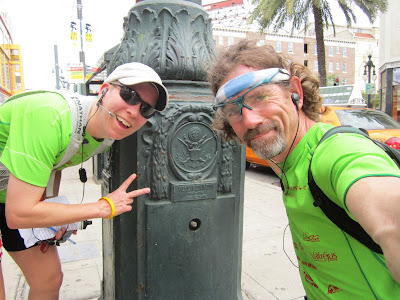 Back into the French Quarter, Sheila told us there might be a David statue at the Ogden Museum.  Yikes, that would be a major overshoot.

Well, you never really know, no reason to give up yet.  Continuing on, we found in quick succession the Double Play bar... 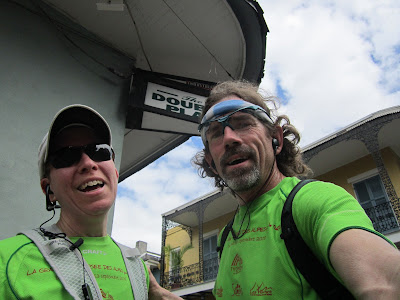 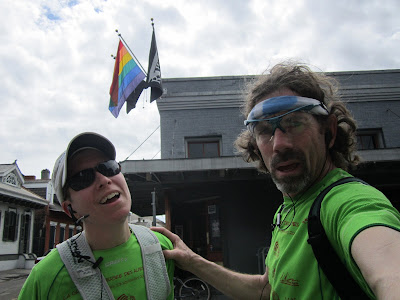 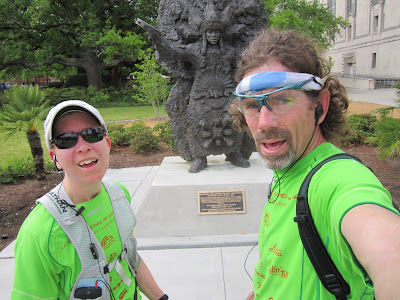 We ran down Rampart and then to Washington Square where I tried to lead John over to the Aids Memorial while John tried to lead me over to the volunteer at the "balloon sword" dare on the other side of the park.  Luckily my blinders are adjustable, given enough prodding.  We made quick work of creating a sword (happily we were given an inflator tool instead of having to use our lungs, especially at that moment!) and then ran south on Frenchman to find Check Point Charlie.  Even John looks a little winded by this point: 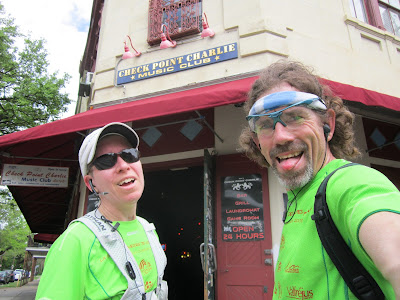 We found Stella! on Chartres Street... 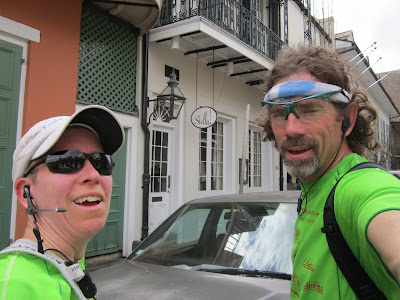 ...then ran down to the French Market to try to locate the Second Line Sashay.  Here we wasted a few minutes because I thought I knew what we were looking for and where it was, but that didn't match the info that Sheila had and I wasn't 100% sure.  Eventually I pulled us down to the north end of the market to get our photo with this sculpture: 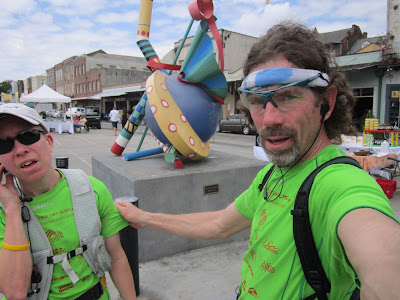 As we were leaving the area we saw the Nads pop out from a side street - hi guys!  If only we had already gotten a David picture, it would have been a race to the finish from there.

We did race down to the Faulkner House in Pirate's Alley for our penultimate photo: 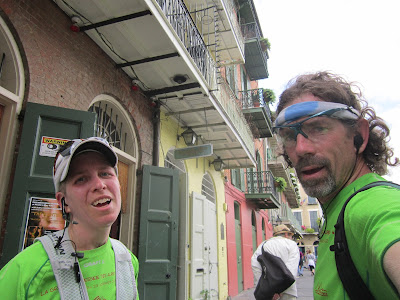 Still no luck on an Alternate David and my foot was starting to hurt for the first time (it had been such a non-issue up to that point, thank goodness).  So we continued to check around the local area but finally knew that it was over.

Just to finish the thing out, we ran over to Poydras where John managed to pull focus from the elusive David with this amazing image: 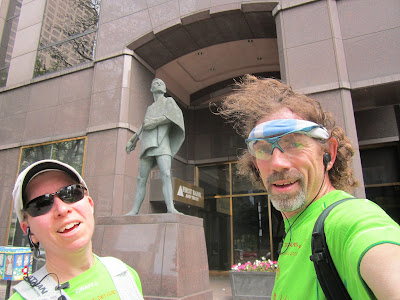 Back along Bourbon Street, we found some folks willing to help us with the Photo Hunt of "see no evil, speak no evil, hear no evil": 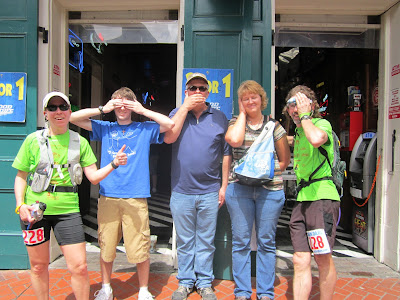 Plus this lovely couple imitating a famous photo by Alfred Eisenstaedt - thank you everyone! 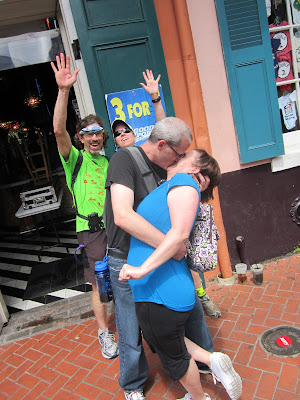 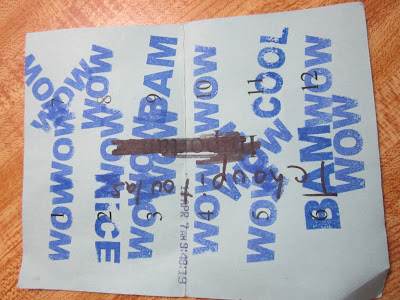 The Nads obviously beat us back there in plenty of time to take the top title.  Kip and Dave also beat us back and moved up in the standings to 3rd, while we clung to 2nd place overall.  Congratulations everyone! 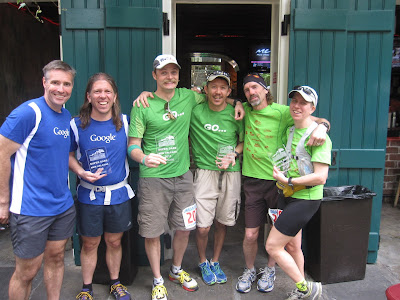 Another fun weekend, another valiant attempt, another 2nd place in a Super Dare (we may hold the Runner Up crown in this one)...

At least I could eat the New Orleans food and run an urban race without my mouth wired shut this time  :)  It's progress!

Let the good times roll, y'all.