I recently heard about a new race, 56 miles on rocky trails in the Catskills.  I've been up and down the Escarpment Trail a few times, and I've been wanting to see the Devil's Path.  The timing was good as a lead-up race for the Vermont 100, so I said "what the heck".  John agreed to crew for me and it looked like he would also be able to come with me for the Devil's Path portion, so that settled it.

We got up ridiculously early, got to chat with a local policeman who was curious why we were out driving at such an odd hour, and made it to the start without further incident.  There were quite a few people running this inaugural race (and a tough race at that).  We started with a 3-mile jog up the road, which was the only easy part of the whole event.

Whoever was still behind me when we started into the woods and up the hill, I let most of them by.  Today was all about training for my climbing legs.  The Long Trail treks had been a great start, now it was time to get serious.  So I didn't want to go crazy at the beginning, just treat this like a training run and ease my legs into the work of getting up the hills.

I was impressed with how most of the field disappeared ahead of me.  These folks are serious athletes, very few back-of-the-packers.  I made my way up to the Escarpment Trail and over to the steep climb up to Blackhead Mountain.  There was a photographer and his dog coming down, hi guys! 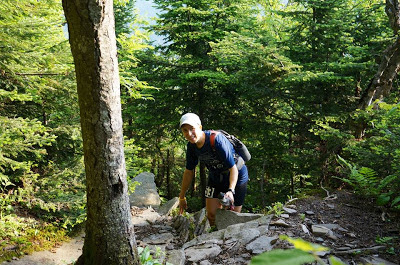 We got occasional views into the cloud-covered valleys as the trail climbed up into the sunshine.  A nice morning, starting to get a bit warm.

There were a couple friendly volunteers at the Dutcher Notch aid station - thank you!  The climb up to Stoppel Point went well, and I started seeing a couple other runners on the way to North Point.  Compared to the lung-buster Escarpment Trail Race, this was a very pleasant way to traverse the trail.

John found me as I was approaching North/South Lake and got to see some views down toward the Hudson Valley.  Good morning! 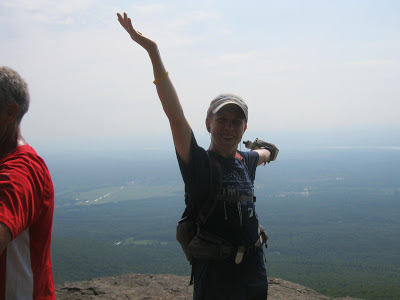 I grabbed a couple snacks at the aid station and gave John a kiss.  The next few miles down to Palenville were mostly pretty easy, and I was warmed up and ready to run a little.  I enjoyed the long downhill to the next aid station where John was waiting.  More water, a couple snacks, time for some real work.

I had previously climbed the next trail in training so I was ready for a long, steep grind.  Yep, that's what it was.  A group of 3 runners passed me, but for the most part I was alone in this section.  I had heard that the trails on top were quite muddy, but the traverse over to Buttermilk Falls was actually better than my previous experience.  There were, however, quite a few large downed trees to climb over.  I enjoyed sitting on each one as I swung my legs over, a nice rest for a couple seconds.

On the next little climb I actually passed someone, I must be doing OK.  The traverse back toward Platte Clove took a long time.  I had done this section in training too, but from the other direction.  Now the trail was in worse condition than I had seen before.  Ah well, you can't win 'em all.

Ho hum, how long does this trail go?  Finally I got to the last big aid station.  Hi John!  He was dressed and ready to come with me for a few miles.  Awesome!  We started with a jog down the road to the beginning of the Devil's Path.  Time to go see some Catskill trails I had not been on before.

I was surprised to start catching up to several other runners.  My legs were doing great so I motored up the climb to Indian Head.  Well, at least until the trail got gnarly and required some grabbing onto tree roots to pull ourselves up.  Very cool.  Glad that John got to experience it too.

Devil's Path was super interesting - lots of rocks, roots, figuring out how to get up and down.  We went over Indian Head, Twin Mountain (2 peaks close together), then a long drop and climb over Sugarloaf.

John took several photos through here - he had no trouble keeping up and taking pictures at the same time: 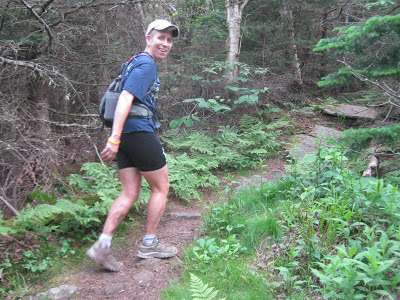 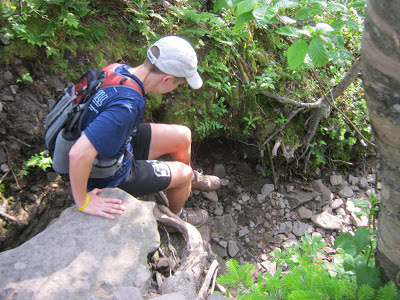 Who came up with the idea for this trail? 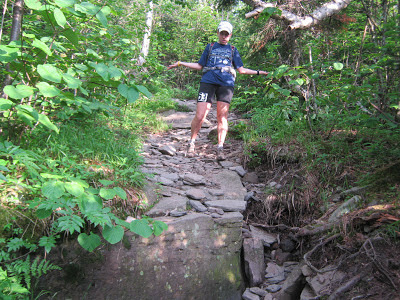 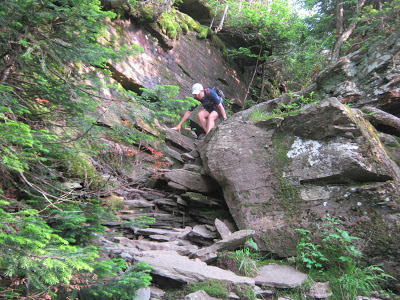 It took quite a long time to get to Mink Hollow and the next aid station.  I had been ahead of my estimates for the first half of the race, but this section started cutting into that "lead".  Mostly I was hoping to get off Devil's Path before dark.  The sun was dropping but there was still light left when we reached Mink.

This is where John was taking off back to the car.  Thank you for the great company!  I refilled my water bottles, ate a cup of delicious chicken noodle soup (wow, that was really good), and bade farewell to John for the evening.

Time for one last big climb.  I passed another guy on the steep ascent of Plateau Mountain, then near the top I saw two guys taking a break.  They commented on the fact that I was still moving, and I told them that it was still light out - we can rest when it gets dark.  They seemed to agree, so we headed on together.  Their pace matched mine so we decided to hang out for a while.

That turned out to be a great way to spend the next 10 miles.  It was David's first time doing a challenging 50-miler, and Bryan was working on running a race (marathon or more, I believe) in every state.  They were funny and talkative, and David set a great pace with his trekking poles and trail-finding ability.  We turned off Devil's Path onto a trail that was much less traveled, more overgrown, and a bit of a challenge to follow in the dark sometimes.

It seemed like we were making good time, but these miles still took forever.  Part of "overgrown" included stinging nettle, ouch.  Not a fan!  David was smart with his knee-high gaiters.  We descended to a notch and then climbed a bit before a long downhill toward the creek.  Here is where my downhill ability decided it was done for the night.  I got slow and tentative on the rocky trail.  Sigh.

Eventually we got to the creek and waded across.  The cool water was nice, and my feet are plenty used to being wet lately.  I took the lead on the other side, setting a solid uphill pace and enjoying feeling strong again after that wimpy descent.  I wasn't looking forward to the final 3-mile downhill, but first things first.

The climb made several sharp switchbacks, and there was often a trail marking on the tree right at the corner.  I would walk up to the marker and stare at it, trying to figure out where the trail went from there.  The guys then would tell me that the trail was behind me - funny!  After a while I learned to look for the switchback over my shoulder.

The trail leveled out and we found the Willow aid station.  They were rationing out water, like half a cup per person.  Hmm, that's not ideal, but at least I was still carrying just enough to mix my last Spiz.  Their campfire was blowing smoke in our faces so we didn't stick around long.  Thank you for being there, ladies!

It was a decent traverse/slight uphill to Tremper Mountain.  Bryan was moving slower so they told me to go on ahead.  I told them I would need some extra time to get down the hill, so on ahead I went.  There was a fire tower at the top, also some rustling in the bushes - porcupine!  Time to go!

Just three miles down a small road, yep, that was the hardest part of the whole race for me.  Mostly because my knees were tired of going downhill (a remnant of the Long Trail training, I believe) and my feet were starting to hurt.  The gentler slopes were OK but the steeper stuff was a challenge.  I made my way down the best I could.

After way longer than I would have liked, I neared the bottom.  There was John waiting on a rock.  Hi sweetheart!  We went down to the last aid station, got a reflective vest for the road section, and walked it in to the finish line.  Phew, I am so glad that's over.  No photo, let's just say I looked relieved.  David and Bryan finished not long after - well done!

It's hard to believe, but it took me 21 hours and 40 minutes to travel 56 miles.  One person at the finish line commented that he beat his Vermont 100 time by 15 minutes... that's pretty much how I felt.  It's a doozy of a race, an excellent experience and super good training.  Thank you to Charlie for putting it together, I think you've got a good idea on your hands!